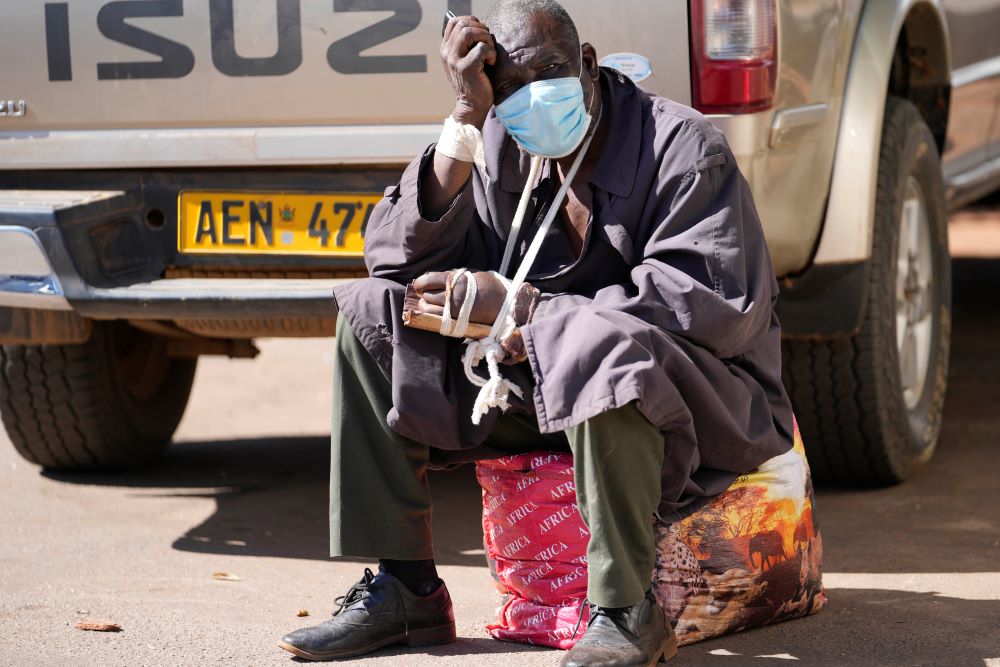 A man sits after being refused medical assistance at Parirenyatwa Hospital in Harare, Zimbabwe, June 21. A strike by health workers has left Zimbabwe's major hospitals in near paralysis. (AP/Tsvangirayi Mukwazhi)

Public hospitals across Zimbabwe have experienced unprecedented labor shortages in recent months, with staff at many institutions going on strike to protest poor pay in a country where the rate of currency inflation has reached nearly a staggering 200%.

Staff at Catholic hospitals in the southern African nation are trying to pick up the slack, but are also struggling with the workload and the nation's worsening economic conditions.

Dr. Thabo Sithole, a physician at the Catholic-run St. Anne's Mission Hospital in Zimbabwe's southwest, has been trained in all kinds of lifesaving medical practices. But lately, because of more frequent electric outages, he has had to adapt to providing aid under candle- or flashlight.

"We are struggling," Sithole told NCR of the staff at his hospital. "We have to keep going to work even when the conditions are very difficult to keep working."

In June, Sithole's colleagues and others at government-run health centers embarked on a strike demanding remuneration in U.S. dollars. The job action grounded major referral hospitals in the capital, Harare, and other areas, with patients being turned away because there was no medical staff to treat them.

Sithole, propelled by his Catholic faith, continued to work. "There is that extra inner and personal drive that says, 'Yes, I am not getting much but now being here means I have to try my best,' " he said. 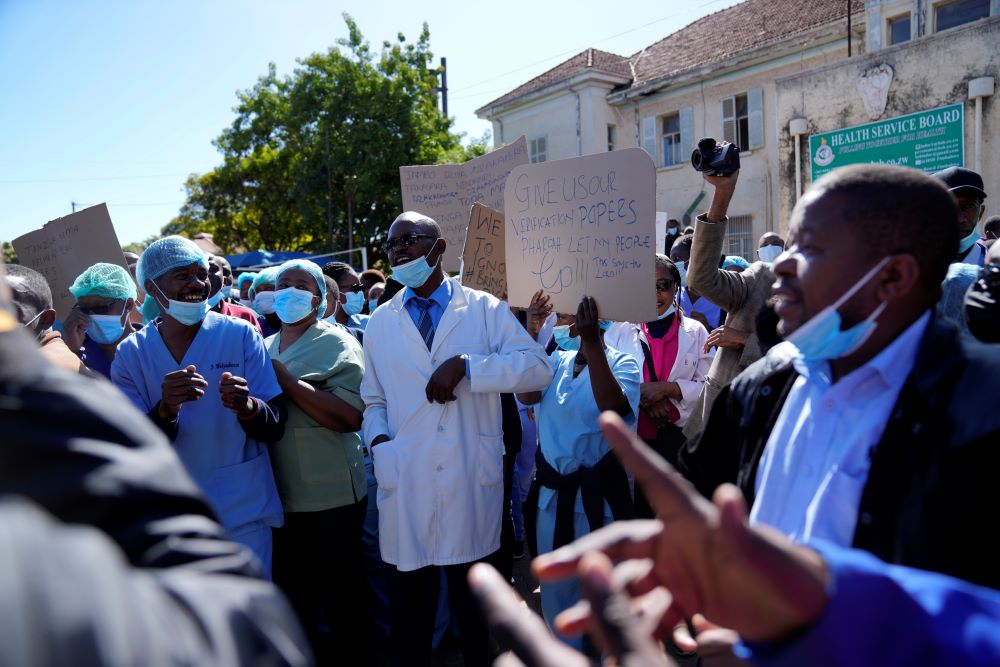 Health workers led by nurses take part in a demonstration over salaries at Parirenyatwa Hospital in Harare, Zimbabwe, June 21. A strike by health workers has left the country's major hospitals understaffed. Catholic hospitals are trying to pick up the slack, but are also struggling with the workload and the nation's worsening economic conditions. (AP/Tsvangirayi Mukwazhi)

Zimbabwean doctors employed in government hospitals earn about $322 a month; nurses are paid about $52 each month. Most of what they earn comes in local currency, which loses value on a daily basis, as the local economy hurtles toward hyperinflation, which erodes purchasing power almost immediately.

At Chitungwiza Hospital, some 20 miles outside Harare, bedridden patients had to be discharged during the June strike. Medical personnel who participated in the June job action face disciplinary action from the government.

President Emmerson Mnangagwa's administration offered to double salaries for health sector employees. But the workers rejected this offer as they pressed for remuneration in U.S. dollars.

The consequences of the June strike for the Zimbabwean health workers, however, are only starting to emerge. The Zimbabwe Professional Nurses Association said July 13 that nurses had been summoned "to attend a board of investigation in respect to the collective action," referring to letters issued to nurses by Parirenyatwa Hospital and Kadoma Hospital.

A fresh strike has been set for July 19 by the health sector workers. This will likely further disrupt health delivery, piling up the pressure on Catholic institutions.

"The numbers of people seeking health care at Catholic facilities are increasing because we are able to offer a better service and normally we have all the personnel and medicines available," Archbishop Alex Thomas Kaliyanil, who leads the church in Bulawayo, Zimbabwe's second-largest city, said in an interview.

This sharply contrasts with public health facilities in Zimbabwe, where medicines and other key items frequently run out. This has been blamed on corruption in which the government awards contracts for the supply of drugs, looting of drugs by public officials and inadequate national budget allocations for the health sector. 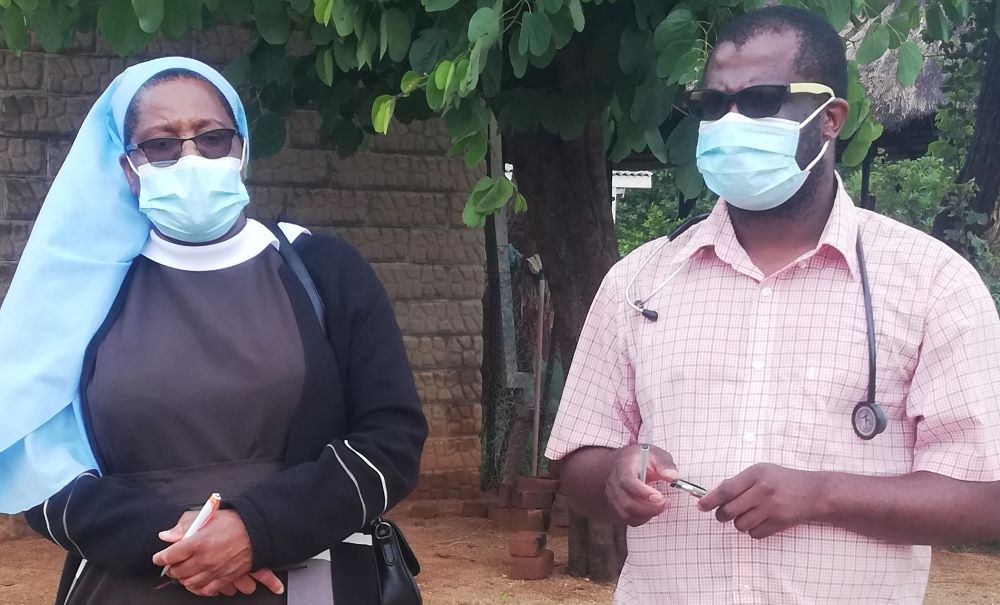 Sr. Fiona Justina Kapita of the Handmaids of Our Lady of Mt. Carmel, health coordinator for the Zimbabwe bishops' conference, stands with Dr. Thabo Sithole at the Catholic-run St. Anne's Mission Hospital in Bulawayo, Zimbabwe. (Courtesy of Fiona Justina Kapita)

About 56 Catholic-run health institutions operate in Zimbabwe, according to Sr. Fiona Justina Kapita of the Handmaids of Our Lady of Mt. Carmel and health coordinator for the Zimbabwe bishops' conference. She told NCR that the Catholic Church in Zimbabwe coordinates funding for those hospitals.

"Funds are hard to come by, but we are just managing and our Catholic facilities are actually the most preferred because we always have staff and drugs available," Kapita said. "We feel that government support is not enough for our hospitals, so this is why [we] try to assist with sourcing funding."

Public hospitals are also dealing with skilled personnel leaving the country for better opportunities in South Africa, the UK and elsewhere.

The shortage of qualified medical personnel affects most African countries. Across Zimbabwe's border, one of the continent's bigger economies, South Africa, has a shortage of as many as 26,000 nurses.

The archbishop said the Catholic Church in Zimbabwe is trying "our best as a church" to coordinate health care funding, but it remains too financially constrained to adequately meet demand.

Catholic relief agencies such as the U.S. bishops' charitable arm, Catholic Relief Services (CRS), as well as others such as Caritas and CAFOD
(Catholic Agency for Overseas Development) are helping to provide some capacity.

"We wish to do more but financial constraints are there," he said. "Through CRS and other agencies, we get some help and we try to help the staff as much as possible, but we can't do everything. The help that we are getting from church partners is very useful."

As the Zimbabwean health sector ails through a plethora of constraints, the medical sector is bleeding skilled personnel. The strikes and demonstrations by nurses and doctors are also crippling service delivery, leaving Catholic facilities as the preferred and often only alternative.

Sithole said his Catholic faith is making the difference. For his patients in the remote Mangwe district, where gravel access roads are difficult to negotiate during the rainy season as they get muddy and slippery, Sithole can be the difference between life and death.

The doctor said that when he decided to move to the area in November 2020, people asked why he would leave his job at a hospital in the town of Plumtree.

Casting his eyes upward, Sithole said: "In the Ndebele vernacular there is a saying that goes: 'We all can't watch and do nothing even when the going gets tough.' "

A version of this story appeared in the Aug 5-18, 2022 print issue under the headline: Catholic hospitals struggle to aid collapsing Zimbabwe system.