Catholic journal says Plan B does not cause abortions 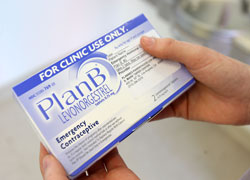 Plan B, the nation's most widely used emergency contraceptive, works only as a contraceptive and does not cause abortions, according to an article in the official journal of the Catholic Health Association. (La Opinion/J. Emilip Flores)

WASHINGTON -- If it holds, a finding in a Catholic health journal could be the key to ending a major dilemma for Catholic health facilities across the nation and around the world.

Plan B, the nation’s most widely used emergency contraceptive, works only as a contraceptive and does not cause abortions, according to an article in the January-February issue of Health Progress, the official journal of the Catholic Health Association.

Theologian Lisa Sowle Cahill of Boston College said if Plan B never causes abortions, then Catholic hospitals should have no moral problem providing it as an emergency contraceptive to a rape victim.

Under the U.S. bishops’ “Ethical and Religious Directives for Catholic Health Care Services,” Catholic facilities may administer emergency contraception to a rape victim, but only to prevent ovulation or fertilization. Ethical and Religious Directive 36 says if the procedure causes an already fertilized egg to be destroyed or prevents its implantation in the womb, in Catholic teaching that is no longer contraception but abortion.

The difference between the Catholic definition of abortion (any destruction of a fertilized human egg) and the American Medical Association’s definition (any destruction of an embryo following its implantation -- typically about seven days after fertilization) is a major subtext in the debate over whether Plan B is only contraceptive or also possibly abortifacient in some cases.

Barr Pharmaceuticals, manufacturer of Plan B, follows the medical association’s definition in describing the drug as strictly contraceptive and suggests that one effect could be to prevent implantation of a fertilized egg, a conclusion challenged by several scientific studies.

Dr. Sandra E. Reznik, who teaches reproductive endocrinology and reproductive pharmacology at St. John’s University in New York, wrote in Health Progress that Plan B is widely regarded in the scientific community as “the most effective emergency contraceptive agent available.” Plan B is Barr’s brand name in the United States and several other countries for the contraceptive drug levonorgestrel.

Commenting on the thesis of the article, Capuchin Franciscan Fr. Thomas Weinandy, executive director of the U.S. bishops’ Secretariat for Doctrine and Pastoral Practices, said, “If it can be proved, that would make a difference” as to how Catholic hospitals, doctors and pharmacists treat Plan B.

The distinction between preventing fertilization and preventing implantation is a crucial moral point in Catholic teaching on the difference between contraception and abortion, but in the American Medical Association’s definition of contraception, both are treated equally. In a phone interview, Cahill said Reznik’s conclusions matched those she has seen in other literature on the topic, including an article in the Oct. 11, 2006, issue of The Journal of the American Medical Association, which she had just recently read in preparing to teach a bioethics course.

She said she knew of at least two states -- Massachusetts since 2005 and Connecticut since 2007 -- that have laws requiring hospitals to provide Plan B emergency contraception to rape victims. A number of other states -- California, Illinois, New Jersey, New Mexico, New York and Washington among them -- require hospitals to offer rape victims emergency contraception or at least inform them where to obtain it.

The question of whether Plan B can also prevent implantation of a fertilized egg as well as prevent ovulation and inhibit sperm from reaching the egg led the Catholic bishops and four Catholic hospitals of Connecticut to oppose that state’s 2007 legislation on emergency contraception unless it allowed hospitals to test for pregnancy and ovulation before administering the drug. In its final form, the law permitted hospitals to do a pregnancy test before administering Plan B, but not an ovulation test.

The question of what tests could be performed before emergency contraceptive treatment is important because of the time-sensitive nature of Plan B. As Reznik put it, “The effectiveness of Plan B decreases with every passing hour, because the chance of missing [the pill’s prevention of] ovulation increases as time passes -- and science has demonstrated Plan B doesn’t work after ovulation occurs.”

In a carefully worded statement Sept. 27, 2007, shortly after the Connecticut law was enacted, the state’s bishops and Catholic hospital leaders said they “believe that this law is seriously flawed, but not sufficiently to bar compliance with it at the present time.”

“The teaching authority of the church has not definitively resolved this matter,” they added, and “if it becomes clear that Plan B pills would lead to an early chemical abortion in some instances, this matter would have to be reopened.”

The statement illustrates the delicacy and fine moral distinctions involved in trying to determine what Plan B actually does and the moral evaluations that would follow from a Catholic perspective.

Otherwise, she said, the drug would also be found effective from five to 12 days after coitus, because that is the time frame between the last chance for a sperm to fertilize an egg and the time a fertilized egg would implant. The declining effectiveness of Plan B between 48 and 120 hours after coitus adds to the argument that preventing a fertilized egg from being implanted is not one of its effects, she said.

Cahill told NCR that if scientific data show conclusively that Plan B is only contraceptive, any pregnancy or ovulation test before its use as an emergency contraceptive after rape “seems to me an unjustified delay that increases the possibility that the raped woman will become pregnant.”

“From the evidence that you were just telling me [from the Health Progress article] and that I read in The Journal of the American Medical Association, it has a limited effectiveness -- you have to use it right away,” she said.

Plan B apparently “does not affect pregnancies that are already established, so what’s really the point in doing a pregnancy test?” she asked. “It doesn’t seem to have a scientific validity to it in the way that Plan B, by all accounts, operates.”

“If the Catholic church wants to put its abortion teaching, its pro-life teaching, in the best light possible, it really has to be accompanied by equally dedicated and aggressive attempts to help women,” she said. “Taking measures to prevent medically appropriate and legally mandated assistance to basics in the name of protecting the unborn -- in ways that are indicated scientifically not protecting the unborn anyway -- that just seems to undermine the pro-life stance of the Catholic church.

“So I think politically it’s a really bad idea even in terms of the church’s own goals,” she added. “And practically, it’s a huge injustice to the women who have been raped.”

Catholic journal says Plan B does not cause abortions