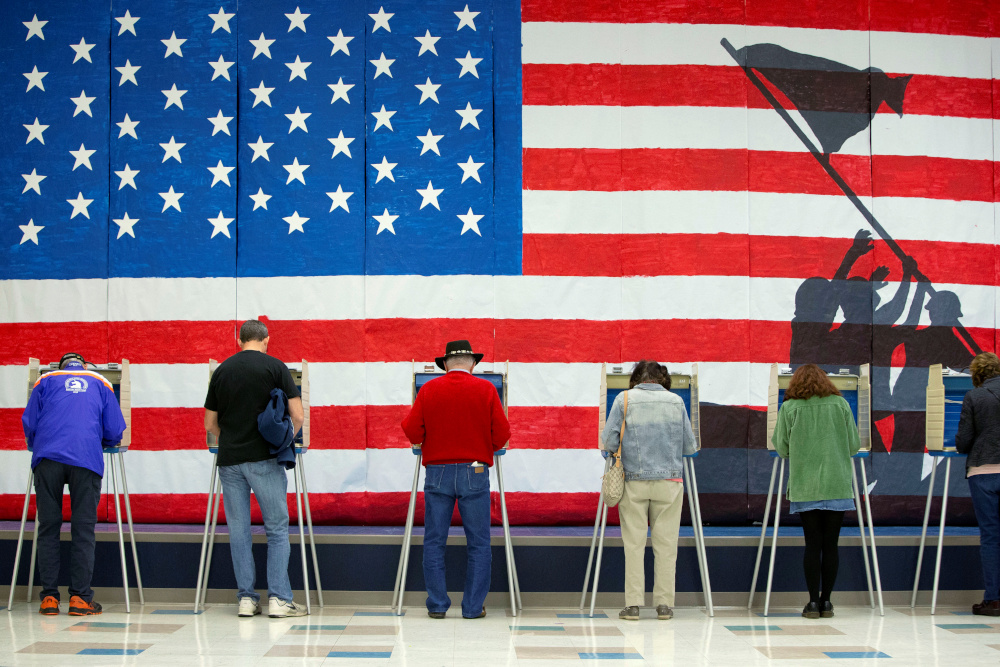 Voters cast their ballots to vote in state and local elections Nov. 5, 2019, at Robious Elementary School in Richmond, Va. Six Catholic organizations have joined with other religious groups and denominational bodies in endorsing a wide-ranging platform ahead of next year's presidential election calling for good governance, election security and and incentives to encourage people to vote as well as policies to ensure voting rights for the marginalized and people of color. (CNS/Reuters/Ryan Kelly)

Six Catholic organizations have joined with other religious groups and denominational bodies in endorsing a wide-ranging platform calling for urgent attention to the nation's democratic principles with the national election one year away.

"However, we move into the election season with concerns about the well-being of our national body politic," it added, spelling out some reasons for the unease.

"Democratic systems are used to perpetuate systemic racism and silence the voices of the marginalized, particularly poor people and people of color. Our democratic processes have been corrupted at every level: through voter suppression and intimidation; outsized financial contributions from anonymous donors and corporate interests; gerrymandering; and foreign actors hijacking public discourse in bad faith."

"People of faith demand free and honest elections to determine the will of the people," it said, adding that some practices currently in place in the United States are "immoral and contrary to a healthy democracy."

It outlined several such practices: "Corporations are given the rights of people and allowed to finance campaigns as a form of free expression"; "there are no protections from racially discriminatory voting rules that prevent citizens from voting"; "formerly incarcerated citizens are disenfranchised even after serving their time"; and "leaders in power wield that power to manipulate and diminish the representation of some citizens over others."

The statement asks Congress to make fixes, among them: "ensuring the accessibility of polling locations" such as locations, hours and advertising; "expanding voters' options to cast their ballot" including early and absentee voting, and voting by mail; making voter registration "seamless" by having Election Day registration, automatic registration and banning "discriminatory voter-roll purges"; and implementing other policies to "incentivize" voter participation by, for example, making Election Day a holiday and providing multilingual ballots.

Catholic organizations that signed on to the statement included Pax Christi USA, the Leadership Conference of Women Religious, the Franciscan Action Network, U.S. provinces of the Congregation of Our Lady of Charity of the Good Shepherd, the Catholic social justice lobby Network, and the National Advocacy Center of the Sisters of the Good Shepherd.

Other bodies representing the Presbyterian Church (U.S.A.), the Church of the Brethren, the United Methodist Church, the Quakers and Reform Judaism also endorsed the statement.

"It was hard to get the faith folks energized about the issues of campaign finance and voting rights," said Jason Miller, director of campaigns and development at the Franciscan Action Network, who was co-convener of the Faithful Democracy Coalition six years ago.

But with the passage of the For the People Act by the House this March – which expands voting rights, limits partisan gerrymandering, strengthens ethics rules and limits the influence of private donor money in politics – Miller said the momentum was there "to try to get the faith folks back on board."

The "Faithful Democracy 2020" statement pointed no fingers at any political party or individual politician. "That goes without saying," Miller told Catholic News Service in a Nov. 4 telephone interview. The issues broached in the statement, he said, are important to people "no matter who you poll across the United States – left, right, Democrat, Republican. Good governance, voting rights, election security ... it's something people on both sides of the aisle support."

"It was really clear that democracy writ large is a concern to all of our organizations," said Dominican Sr. Quincy Howard, a government relations specialist for Network.

"This is not our bread and butter issue, democracy, but we know that people of faith had a pivotal role in the Voting Rights Act," Howard told CNS Nov. 4, "and we know there is a conscience there that needs to be brought to bear at a pivotal moment."

"A lot of our organizations do have get-out-the-vote initiatives," Howard added. "Democracy is fundamentally focused on engagement."