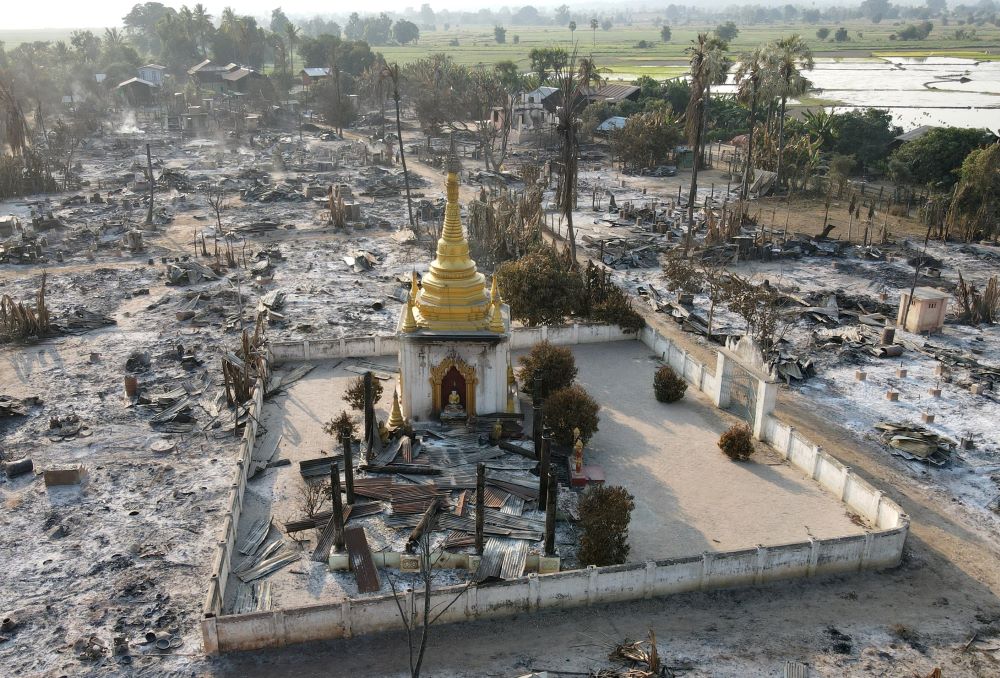 An aerial view of burned Bin village in Myanmar's Sagaing region is seen Feb. 3, 2022, after villagers say it was set ablaze by the Myanmar military. "We live in times of crisis, the likes of which we have not seen for almost three-quarters of a century," Archbishop Gabriele Caccia, Vatican ambassador to the United Nations, said at a June 20-23 peace-building conference. (CNS/Reuters)

From the widespread conflict in Myanmar to the return of a full-scale war in Europe, worldwide violence is escalating. Meanwhile the pandemic has intensified political polarization, racial and income inequalities, poverty, and threats to the environment.

"We live in times of crisis, the likes of which we have not seen for almost three-quarters of a century," said Archbishop Gabriele Caccia, Vatican ambassador to the United Nations, at a June 20-23 peace-building conference.

"Catholic Peacebuilding in Times of Crisis: Hope for a Wounded World" drew 1,000 registrants and featured some 80 speakers from 30 countries. The gathering was held virtually due to ongoing COVID-19 restrictions.*

Gerard Powers is coordinator of the Catholic Peacebuilding Network — sponsor of the event with more than two dozen partners — and director of Catholic peace-building studies at the University of Notre Dame's Kroc Institute for International Peace Studies, which funds the network's secretariat.

"A lot of Catholics don't fully appreciate the amazing things the Catholic community is doing in response to crises," Powers told NCR. A goal was for participants to leave "inspired, challenged and convinced that the Catholic Church is a peace-building church."

Caccia, in a prerecorded message, reviewed some of the major global obstacles to peace — a string of conflicts across Africa, suffering in the Middle East, and the violence in Myanmar and Ukraine among them.

In the face of such challenges, plus the "untold sums" spent on militaries and the continued nuclear arms race, "It is all too tempting to divert our attention away from such suffering and abandon the pursuit of peace," said the archbishop. And there's another challenge, he said: "an apathy to the ills of the world inculcated by national media environments that invite us to look only inward, oblivious to the common challenges facing humanity."

Francis, continued Caccia, speaks of such indifference in Fratelli Tutti, a document proposing fraternity and social friendship as ways to build a more just and peaceful world. Quoting the encyclical, the archbishop noted, "The sense of belonging to a single human family is fading, and the dream of working together for justice and peace seems an outdated utopia."

This apathy, said Caccia, means peace builders must work not only to engage parties but also raise awareness among the public and policymakers, helping them grasp that widespread conflict concerns everyone.

The archbishop also spoke about the paramount importance of the United Nations, "despite its imperfections." The organization's four pillars — peace and security, human rights, rule of law, and development — align with the Holy See's aim of a just peace and integral human development, he said, adding the U.N. has enacted necessary reforms and thereby improved its ability to respond to fragile situations around the globe.

Discussing the future of U.N. peace building, the archbishop said this year the secretary-general set a target of $500 million per year to be distributed through his peace-building fund; that's more than double what the fund distributed last year. If the increase is approved, it will earn "a substantial peace dividend," Caccia said. Research indicates that every dollar invested in peace building reduces the cost of conflict by more than $16.

"Such potential gives hope that despite setbacks, the U.N. is on the path to building positive peace around the world," Caccia said. 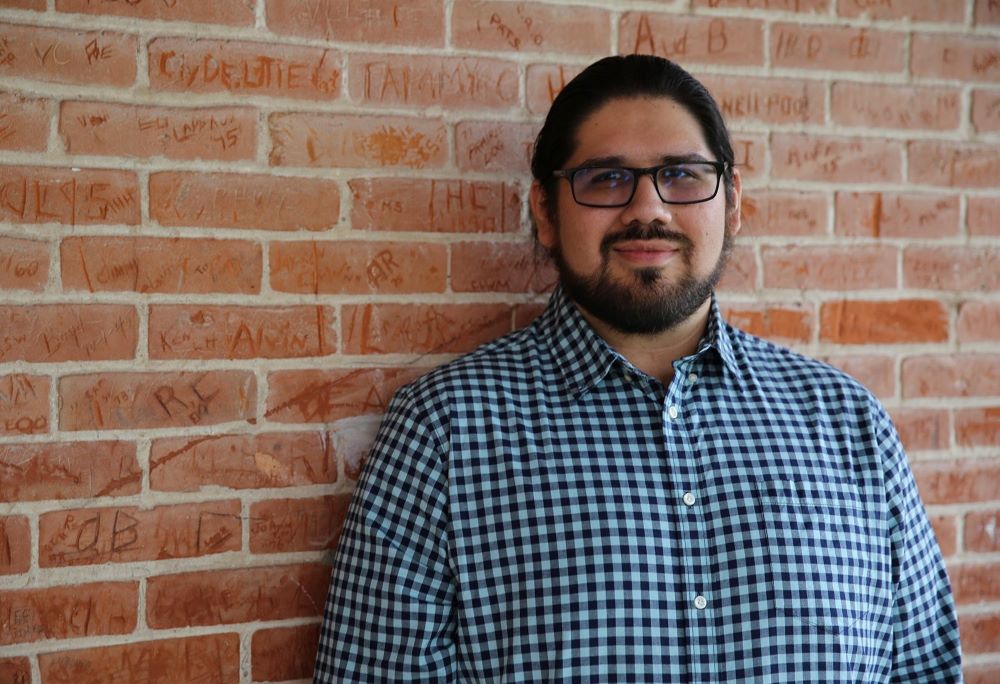 Other topics addressed during the four-day conference included: peace building and philanthropy, the ethics of nonviolence, the critical role women play in durable peace, truth as a foundation for transitional justice and reconciliation, and how peace building can respond to mass displacement caused by conflict and climate change.

The session on truth and reconciliation was based on the concept that for transitional justice to be effective, and for post-conflict reconciliation to be sustainable, truth must be at the foundation. Thus, crimes and human rights violations must be acknowledged before healing can occur or peace be established.

One panelist was Maka Black Elk, a leader in Native American and Catholic education for truth and healing. He's been working to address historical trauma and past racial injustice at Red Cloud Indian School, a Jesuit institution on the Pine Ridge Indian Reservation in South Dakota.

Black Elk is guiding a project that gives survivors of the boarding school a chance to share their stories. The goal is healing, he said, but the term "reconciliation" is not used in the process.

For many Indigenous people in the United States and Canada, "there's a sense that reconciliation isn't truly possible," said Black Elk. That's because reconciliation for most people implies a particular power balance, giving parties the chance to "come to the table in a mutual way and agree to right wrongs."

"That power balance doesn't exist in this case," he said. However, "we do believe healing is possible, and healing is only possible when the truth is revealed."

Black Elk added that as stories surface, so does trauma. Therefore, the truth and healing process requires ongoing follow-up and care.

The conference's session on truth in a small way revealed the practical realities of peace keeping — and of technological inequities. Two panelists from Colombia were unable to attend due to their involvement in the country's election and its truth and reconciliation commission report, due at the end of June. And in the middle of a Nigerian bishop's reflection, his power went out.

Bishop Matthew Hassan Kukah of Sokoto, Nigeria, handled the momentary darkness in stride and proceeded to share some of the far greater difficulties his country faces.

Kukah is a former member of the Nigerian Human Rights Violations Investigation Commission (1999-2002). He explained that after the commission there was a belief the "fruits would be justice, peace and freedom." Instead, "The journey has proven to be a challenge and source of great difficulty for our people."

Amid great challenges, including regular kidnappings, the church continues to play an important role, such as providing education and health care, Kukah said. 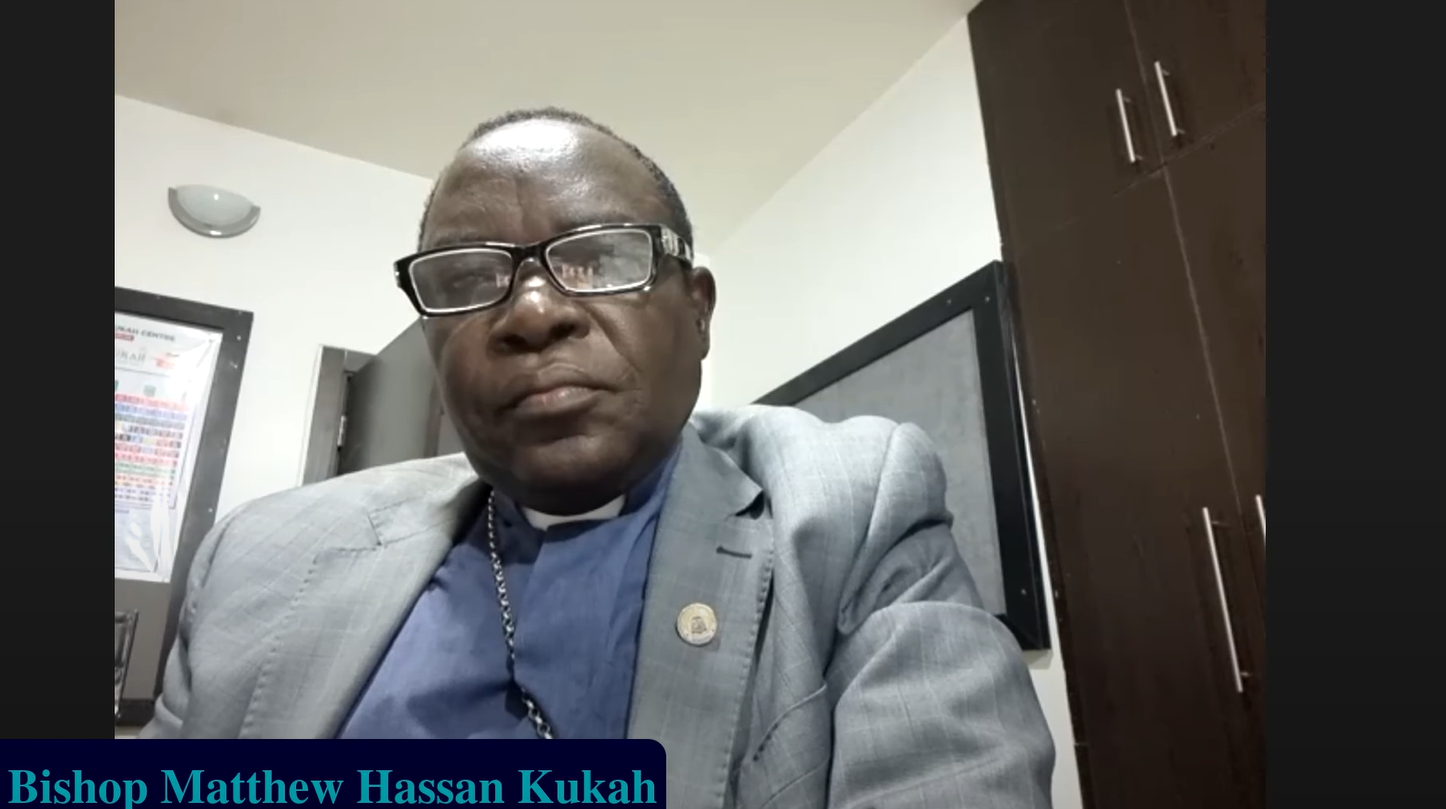 Bishop Matthew Hassan Kukah, a former member of the Nigerian Human Rights Violations Investigation Commission, speaks June 20 during a panel on truth as a foundation for transitional justice and reconciliation. The bishop discussed challenges Nigeria has faced following the commission. (NCR screenshot)

Fr. Peter-John Pearson, of the Southern African Bishops' Conference, emphasized three discoveries made through the South African Truth and Reconciliation Commission. Created in 1995, the commission aimed to help heal the country and bring about reconciliation by uncovering truth about apartheid-era human rights violations.

Pearson said it established a record that validated people's experiences, bringing concealed, marginalized voices to the discussion table; disclosed stories of resilience and resistance never known before; and, by giving people permission "to tell big truths, it also gave people a way to tell their own domestic truths."

Throughout apartheid there was a "secrecy and concealing in domestic situations, " he said. One of the biggest gifts of the commission was that "truth telling now became a domestic priority."

Powers, speaking with NCR the final day of the conference, said one result of the gathering was the "powerful cross-fertilization among participants."

"Bishops could connect with peace activists, scholars connect with grassroots peace-building organizations," he said. This cross-fertilization across experiences and conflict zones, "allows leaders who rarely come together to share wisdom, to share practical lessons and to learn from one another."

*Correction: The original version of this article mischaracterized how often the peace-building conference has been organized. We apologize for the error.

A version of this story appeared in the July 22-Aug 4, 2022 print issue under the headline: Catholic peace-building conference explores ways to bring hope.