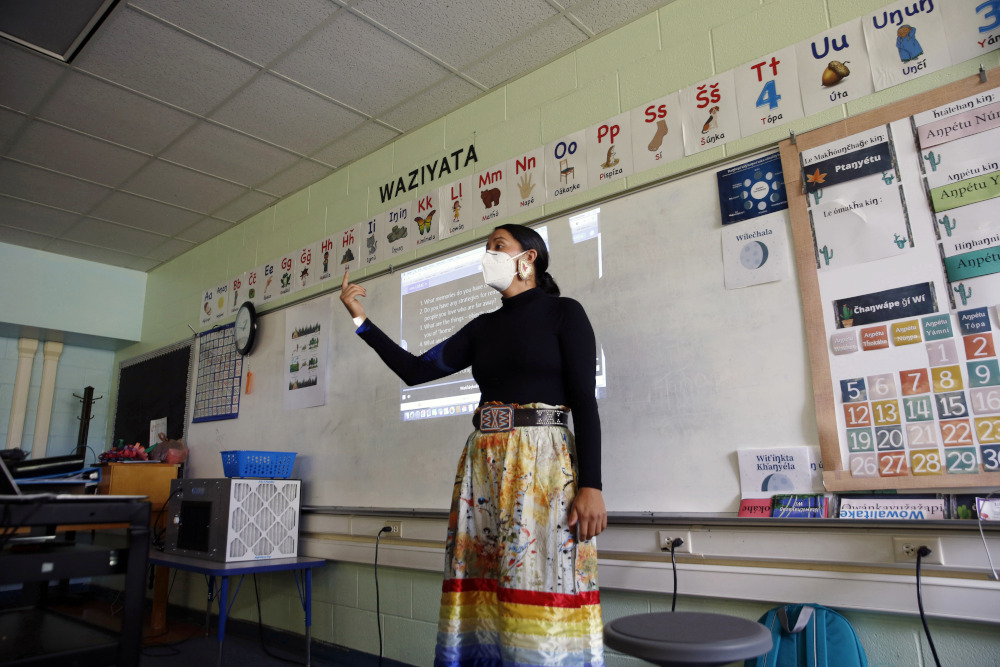 Middle schooler Rarity Cournoyer stood at the heart of the Red Cloud Indian School campus and chanted a prayer song firmly and solemnly in the Lakota language — in a place where past generations of students were punished for speaking their mother tongue.

Her classmates stood around her at a prayer circle designed with archetypes of Native American spirituality, with a circular sidewalk representing a traditional medicine wheel, crossed by sidewalks pointing to the four cardinal directions.

Lakota language teacher Amery Brave Heart walked quietly with a small bundle of smoldering sage stems. Brave Heart — sporting a long braid on the very campus where his grandfather, Basil Brave Heart, said he had his long hair shorn and carelessly trampled on as a newly arrived pupil — offered the sage to each student as part of a brief smudging or purification ritual, in which they symbolically waved the scented smoke toward themselves.

Such scenes would have been hard to imagine here decades ago when Holy Rosary Mission — as the Catholic K-12 school was then named — formed part of a network of boarding schools across North America where generations of Indigenous children were brought to weaken their bonds to tribe and family and assimilate them into the dominant white, English-speaking, Christian culture.

But while Lakota staff, language and ritual have increasingly become central to Red Cloud, the 133-year-old school has never fully reckoned with this history, which has alienated many Lakota living on the Pine Ridge Indian Reservation, one of the nation’s largest.

Now the school is undertaking what it calls a Truth and Healing process, seeking to hear the stories of former students, open its archives and face its past. 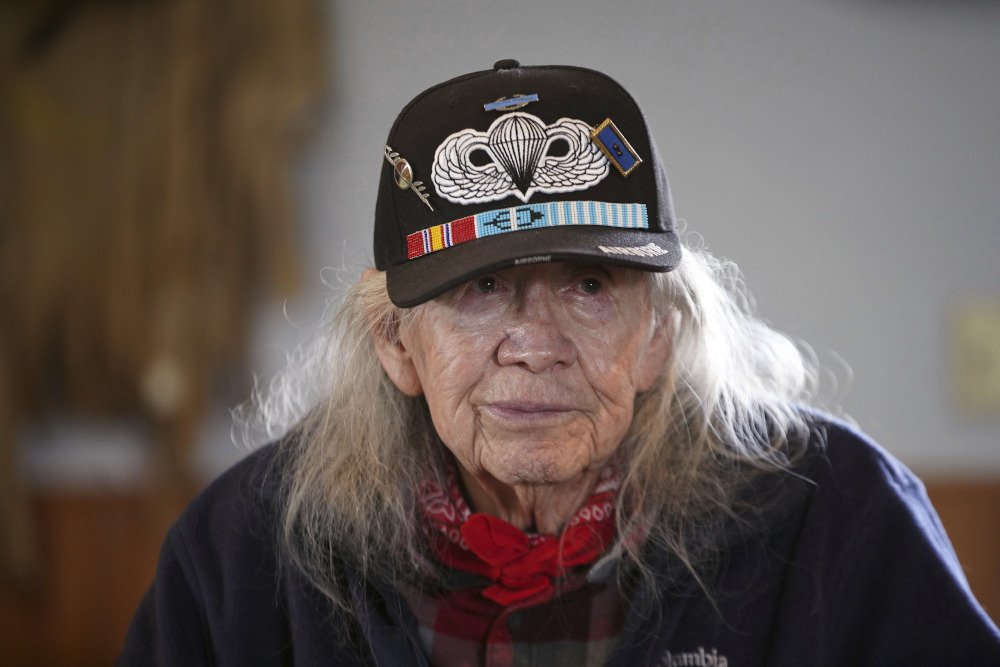 Basil Brave Heart, 88, who attended Red Cloud Indian School when it was known as Holy Rosary Mission, sits for an interview Sept. 30, 2021, in Pine Ridge, S.D. "Physical abuse was difficult. But when they took my language away, they took my moral compass," Brave Heart said. (AP/Emily Leshner)

"I'm so proud of who we are today, the direction Red Cloud is heading in. That's the beautiful part," said Tashina Banks Rama, the school's vice president for advancement. "The tough part is we have to confront ... the dark history of boarding school policies and our role in that policy."

The ceremony at the prayer circle was a way of acknowledging that history, one of several small gatherings held at Red Cloud on the last day of September to mark what's come to be known across North America as Orange Shirt Day.

Many students and teachers wore orange in solidarity with Indigenous children of past generations who suffered cultural loss, family rupture and sometimes abuse and neglect while compelled to attend residential schools from the late 19th to the mid-20th centuries.

The event commemorates the long-ago account of an Indigenous woman in Canada whose residential school confiscated her orange shirt — a cherished gift from her grandmother — and made her wear a uniform.

"Our ancestors faced a lot in their time, but they remained resilient," Red Cloud senior Mia Murdoch told fellow students during the high school's observance. "They weren't allowed to express themselves or to rejoice in who they were. We as young people now have those privileges. ... Orange Shirt Day is not just a single day. It is a confrontation of the past and a conversation that takes place over a long period." 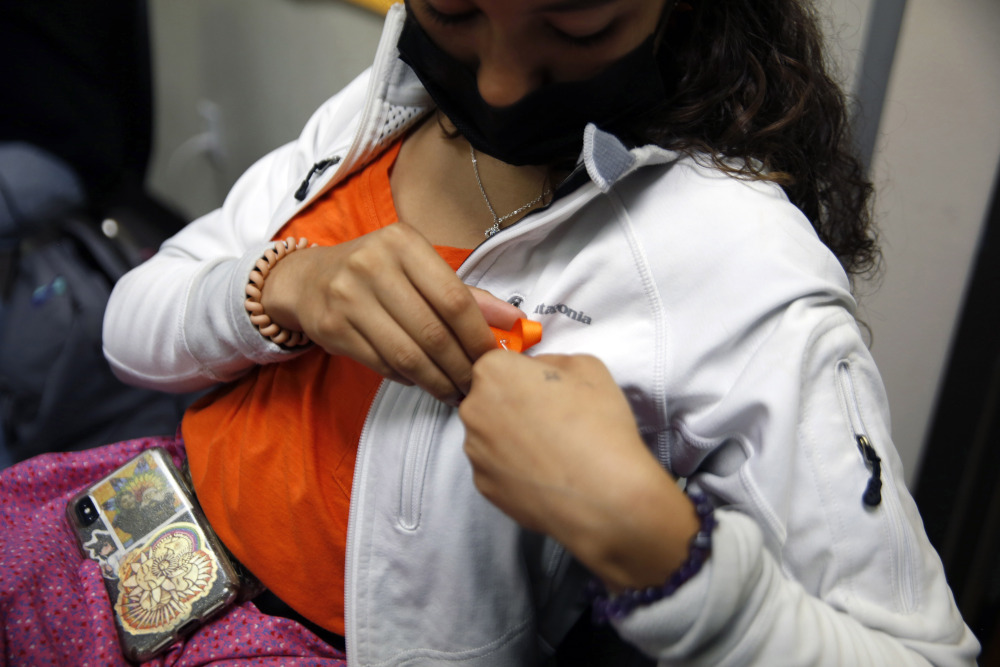 Esperanza Rama, a sophomore at Red Cloud Indian School, pins an orange ribbon to her shirt on Sept. 20, 2021, in Pine Ridge, S.D. Students and teachers wore orange in solidarity with Indigenous children of past generations who suffered cultural loss, family separation and sometimes abuse and neglect while compelled to attend hundreds of residential schools in the U.S. and Canada from the late 19th to the mid-20th centuries. (AP/Emily Leshner)

The school's Truth and Healing process, begun in 2020, is following four steps described as confrontation, understanding, healing and transformation.

"I think people want to rush quickly to healing because it’s hopeful ... but there's a lot more that needs to happen before we can," he said.

That includes giving former students a chance to tell their stories, whether in public settings or confidentially.

It will also involve a deep dive into school archives. "The stories that records and archives tell are sometimes ones that we don't want to hear," Black Elk said.

The Truth and Healing process comes amid larger-scale reckonings by governments and church groups that ran residential schools.

Earlier this year in Canada, specialists using ground-penetrating radar discovered hundreds of unmarked graves at former school sites. The discoveries reopened historical wounds years after a 2015 report by the Truth and Reconciliation Commission of Canada said residential schools were often abusive, unsanitary and unsafe, where children died from disease and fires "in numbers that would not have been tolerated" anywhere else. 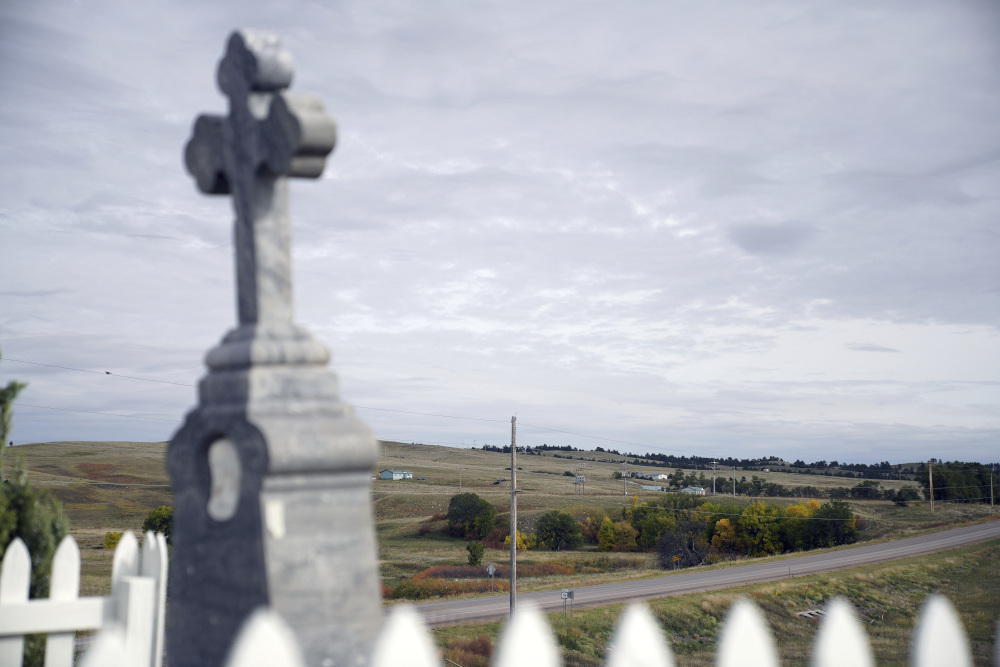 Pine Ridge Indian Reservation is seen from the burial place of Chief Red Cloud, the 19th century warrior, Sept. 30, 2021 in Pine Ridge, S.D. Red Cloud defended against U.S. land grabs as long as he could but converted to Catholicism and invited the Jesuits to start Holy Rosary Mission after he and his people were confined to Pine Ridge. (AP/Emily Leshner)

Lakota language instruction is now woven into the curriculum. On a recent day, students in one high school class competed to complete a series of translations the fastest.

"Help each other out, work together," teacher Roger White Eyes urged as he moved from desk to desk.

"It’s just awesome to hear the language spoken by the youth," said White Eyes, wearing a T-shirt and face mask with Red Cloud logos. "For me, growing up, you never heard it" except among elders.

Across the campus, elementary students sat in a classroom where they learn most of their subjects in a Lakota immersion program.

Teacher Randilynn Boucher-Giago presented a slideshow on the boarding school legacy. Afterward the students gathered around a drum and joined in a pulsing, full-throated Lakota chant.

Boucher-Giago said she incorporated the chant into the lesson to tell the students: "You speak Lakota, you sing in Lakota. Our grandparents had suffered, but now you're turning that around."

As a Catholic school, Red Cloud also represents something larger.

"We also have to address a very dynamic and complex relationship between Indigenous people as a whole and the greater Catholic Church, and what that church represents for colonial history," Black Elk said. "And so we're kind of ground zero for an intercultural and interreligious dialogue."

It's a complex picture, because some Lakota are Catholics and some follow Lakota spiritual traditions, while others practice both and still others belong to different faiths. The school teaches about both Catholicism and Lakota beliefs in its religion classes.

'We've got to pursue the truth so that we understand fully the past.'
—Fr. Peter Klink

It's a complex picture, because some Lakota are Catholics and some follow Lakota spiritual traditions, while others practice both and still others belong to different faiths. The school teaches about both Catholicism and Lakota beliefs in its religion classes.

The Jesuits at the school, as elsewhere, are undergoing a soul-searching of their own.

Leaders of the order in the U.S. and Canada issued a statement in August expressing regret for the suppression of Native culture and separation of families and pledging cooperation with efforts to "shine the light of truth" on this history.

Fr. Peter Klink, a former longtime president of Red Cloud and now its vice president for mission and identity, first began working at the school in 1975. He's seen it increasingly incorporate Lakota staff and cultural sensitivity.

Still, "the pain or the trauma of that past can hold us back no matter what positive moves we've made," he said. "We've got to pursue the truth so that we understand fully the past."

Critics inside and outside Red Cloud say the school still has work to do.

While Mass attendance is only required of students on a few dates each year, some are calling for that mandate to be removed, recalling how past generations were coerced into converting to Christianity.

Some want the school to immediately begin searching for children's graves with ground-penetrating radar.

And they want the school's history told — all of it.

Basil Brave Heart, who attended in the 1940s, said that while some of the priests and nuns were kind, one made him bite a rubber band, stretch it and snap it against his lips as punishment for speaking a Lakota word. His and other boys' long hair, considered sacred, was unceremoniously cut short upon arrival.

"Physical abuse was difficult. But when they took my language away, they took my moral compass," said Brave Heart, 88, who lives on the nearby farm where he grew up and where he helps other Native Americans heal from trauma through traditional ceremonies.

"The language we speak is the way you think, the way you pray and the way you conduct your ceremonies," he said. The Lakota language, he said, resonates with divine vibration; taking it away "was moving us from our Indian-ness to something else," he said. 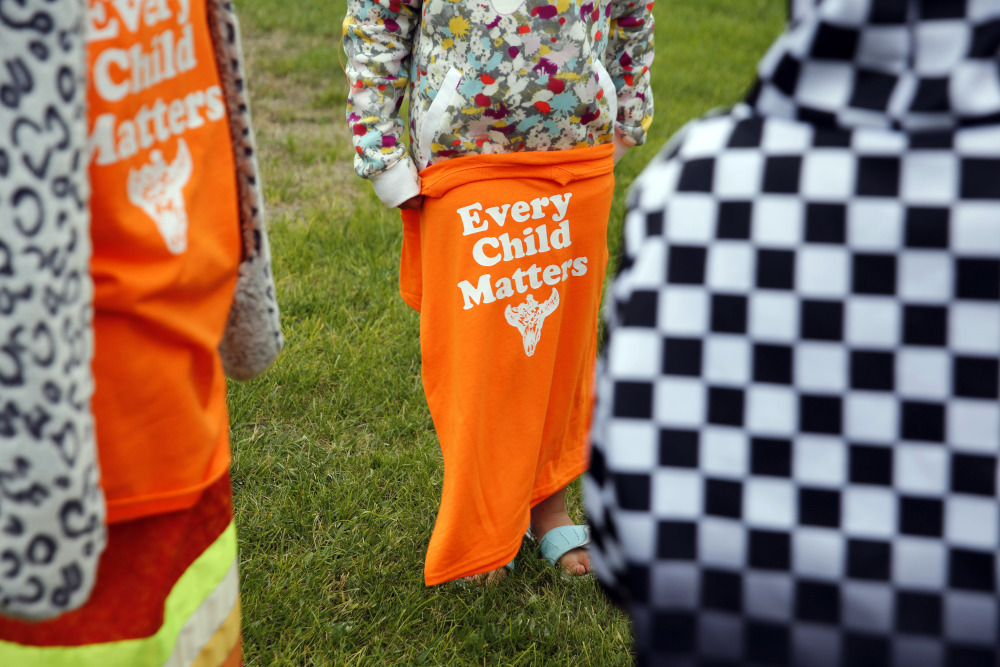 Some former Holy Rosary attendees do look back positively on their boarding school education.

"It depends on who you talk to," said Patricia Catches the Enemy, 80, who also lives nearby. She said she "had some sadness, having to leave my home and being forced to go into a school." But she said she didn't witness any abuse, and she values the education, the training in skills such as needlework and the deepened Catholic faith that she received at Holy Rosary.

She said it's important to focus on today's problems, such as drug addiction: "The past is the past. We can't do anything about it but forgive and move on."

Black Elk also said the school plans to use ground-penetrating radar where unmarked graves are suspected at the school's historic cemetery and other sites beginning next summer. That may not be as soon as some would like, but Black said the school will consult with spiritual leaders, former students and other stakeholders.

"It isn't to do a quick and dirty measure of what your number (of graves) is. That's actually traumatizing," he said. "Really what ground-penetrating radar is about is healing. You're finding people. You're trying to find names, and a story about why that person is there."

Rama, the vice president for advancement at Red Cloud, said she never imagined she would be working for Red Cloud, given the painful experiences her family had in boarding schools.

"I’m not Christian. I'm definitely not Catholic," she said. "I was raised in traditional Lakota spirituality."

But when her teenage daughter struggled in her school, Rama's mother persuaded her to transfer her to Red Cloud, saying things had changed. The girl began to thrive — and is now, years later, teaching the Lakota language at the school.

Rama, whose younger children are now students here, works in a section of the century-old Drexel Hall, a gabled, brick complex that once housed the children's dormitories.

"We’re reclaiming this space," Rama said. "This building maybe used to be a boarding school, but now, when my children visit me in my office, these halls are filled with their laughter. And I think the spirits of the past and our ancestors could not be more proud of where we are today."

[Associated Press religion coverage receives support from the Lilly Endowment through The Conversation U.S. The AP is solely responsible for this content.]