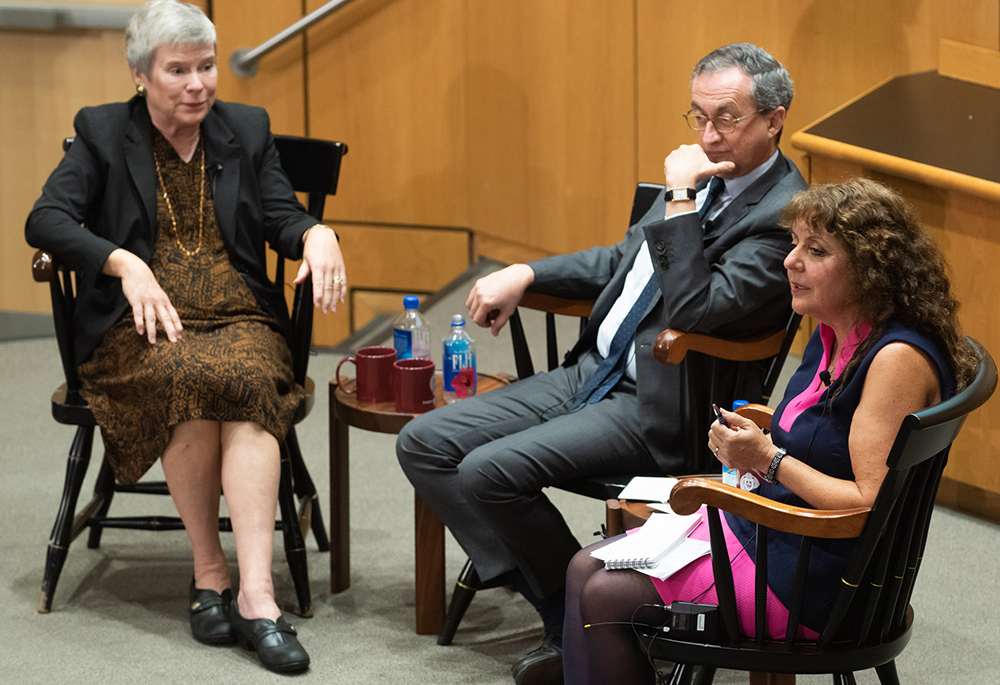 Participants at an Oct. 26 event on nuclear arms issues at Fordham University in New York City included, from left, Rose Gottemoeller, a lecturer at Stanford University; Ambassador Juan Manuel Gómez-Robledo, a veteran diplomat and the deputy permanent representative of Mexico to the United Nations; and Maryann Cusimano Love, a professor at the Catholic University of America. The event was sponsored by the Fordham Center on Religion and Culture. (Leo Sorel/Fordham University)

Two Catholic scholars — one a former U.S diplomat — who study nuclear arms, peace and disarmament issues say the current tensions between Russia and the United States over the war in Ukraine should not deter either country from "lowering temperatures" over use of nuclear arms.

And, in fact, this is the exactly the moment that diplomacy needs to kick in to avert worsening tensions, the scholars say.

Appearing at a recent public forum at Fordham University in New York City, Rose Gottemoeller of Stanford University and Maryann Cusimano Love of the Catholic University of America also said it is important for groups like the Catholic Church to continue public pressure and expand awareness on nuclear arms issues.

"We must, we must control nuclear weapons," said Gottemoeller, a former U.S. diplomat and former deputy secretary general of NATO who does not support immediate or unilateral disarmament, but credits religious groups with keeping the idea of total nuclear disarmament alive.

Love, who teaches international relations, said peace-building is something done "when times are bad, when times are tough" — which is why "it is important now and why it's too important to be left [solely] to governments."

Praising the work of "religious actors" like the Catholic Church for their "moral voice" in disarmament efforts, Love said given current tensions and growing concern about nuclear issues, "We can't let this moment go."

In the face of an existential threat, "global solidarity" is needed more than ever, Caccia said during the forum, entitled "New Nukes and New Risks" and sponsored by the Fordham Center on Religion and Culture.

Caccia cited a long record of church teaching and pronouncements on nuclear arms, noting that the day before the Fordham event, Pope Francis, speaking at the Rome Colosseum, cited the pleas for peace and the non-use of nuclear weapons by Pope John XXIIII during the Cuban missile crisis, six decades ago in October 1962.

"Sixty years later, these words still impress with their timeliness," Francis said, quoted by the Associated Press. "I make them my own."

Gómez-Robledo praised a 1967 treaty of Latin American countries in making the region a nuclear-free zone, as well as the success non-nuclear countries have had in stigmatizing the possible use of nuclear weapons by the United Nations through the 2017 Treaty on the Prohibition of Nuclear Weapons.

That treaty, which has not been signed by the major nuclear powers, calls nuclear weapons illegal and makes them a violation of international law.

"A nuclear war can never be won so it should never be fought," the Mexican diplomat said at the forum.

In follow-up interviews with NCR, the two scholars said that while the current situation is deeply worrying and troubling, some hopeful signs exist. Gottemoeller noted that a prized outcome of the Cuban missile crisis was that the near-start of a nuclear conflict between the United States and the Soviet Union ended in six decades of diplomacy to control, limit and reduce nuclear weapons.

Both the United States and Russia are still abiding by the 2010 New Start Treaty – or NST – a nuclear arms reduction treaty. Despite recent bellicose statements by Russian President Vladimir Putin, Russia is not signaling that it is leaving the treaty, Gottemoeller said.

That is one sign of optimism. Another Gottemoeller cited is what appears to be a slight pulling back of rhetoric from Putin on the possible Russian use of nuclear weapons, particularly tactical weapons that could be used in Ukraine.

Putin's comments in a recent speech centered on the precedent of the U.S. using two nuclear weapons against Japan at the end of World War II, and less on the possible use by Russia in the current conflict, Gottemoeller noted. (Reports since the speech say U.S officials are concerned about apparent discussions the Russian military have had about the possible use of a tactical nuclear weapon.)

While Gottemoeller thinks that "change of rhetoric" is significant, she is still worried about continued Russian allegations of Ukraine preparing a nuclear-equipped "dirty bomb" – a "ridiculous idea," said Gottemoeller, who is a lecturer at the Center for International Security and Cooperation at Stanford. She also previously served nearly five years as the U.S. undersecretary for arms control and international security. In 2009 and 2010 Gottemoeller was the chief U.S. negotiator for the New START Treaty. 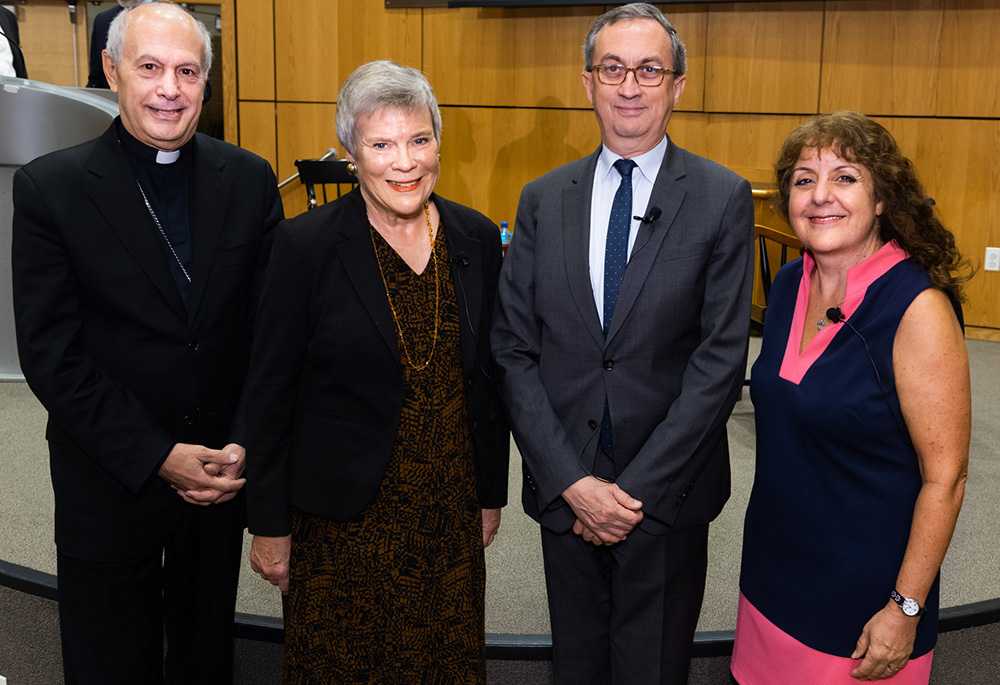 Participants at an Oct. 26 event on nuclear arms issues at Fordham University in New York City included, from left to right, Archbishop Gabriele Caccia, the Holy See's permanent observer to the United Nations; Rose Gottemoeller, a lecturer at Stanford University; Ambassador Juan Manuel Gómez-Robledo, a veteran diplomat and the deputy permanent representative of Mexico to the United Nations; and Maryann Cusimano Love, a professor at the Catholic University of America. The event was sponsored by the Fordham Center on Religion and Culture. (Leo Sorel/Fordham University)

While a champion of diplomacy between countries as the most realistic way to achieve arms control and eventual nuclear disarmament — something she believes cannot be done unilaterally — Gottemoeller nonetheless believes there is an important role the church and Catholic advocates for peace can make for disarmament.

"At the diplomatic level, it's good to know that the religious community has our backs," she said in the interview.

Citing an earlier lecture she gave last month in Livermore, California, Gottemoeller said that Cold War history shows "that it is not only necessary to negotiate, but possible to do so even in the midst of crisis, even when we think the Russian leadership is reprehensible." She said people forget that "negotiating in those years was tough—it was the height of Cold War — but we don't often have the luxury of negotiating with friends."

When asked in public forums if nuclear weapons can be controlled in the wake of the Ukraine conflict, Gottemoeller said she responds in the affirmative.

"We must," she said. "Russia and the United States, as the two biggest nuclear powers, have the responsibility to prevent global nuclear holocaust."

"Options are out there for diplomacy," Gottemoeller said, "so let's get on with it to lower the nuclear temperature."

For her part, Love said "law and morality concerning nuclear weapons are changing faster than our policies for containing nuclear dangers."

Francis, she added, has declared that even the possession of nuclear weapons is illegal and immoral. The peace-building tools used in conventional conflicts, she said in a post-forum email, "can help bridge the gap between law, morality and current nuclear weapons policies and the threats being made by the Russian government to use them."

Love sees some shift since the approval of the 2017 treaty — a shift that has possibly made more people receptive to the calls for deeper nuclear disarmament by Francis and others.

She believes the church can play a useful role not only in advocating for disarmament but in preparing the public for that moment when diplomacy may be successful in reducing the nuclear threat.

"It's important that religious actors help prepare the public for peace," Love said in an interview.

As for the immediate crises related to Ukraine, Love believes Putin's nuclear threats are likely to fail; other nuclear threats — such as veiled threats the United States made during the Korean and Vietnam wars — did not change those wars' ultimate outcomes.

She calls such threats "nuclear backfires."

"It's easy to make those threats, but it's not militarily useful on the ground," Love said. And in the case of the Ukrainians fighting the Russian invasion, "it only strengthens the Ukrainians' resolve."

The co-sponsors of the Oct. 26  event at Fordham included the Catholic Peacebuilding Network;  the Kroc Institute for International Peace Studies; the Berkley Center for Religion, Peace & World Affairs at Georgetown University; the Nuclear Age Peace Foundation; Reverse the Trend: Save Our People, Save Our Planet; and the Sant'Egidio Foundation for Peace and Dialogue.