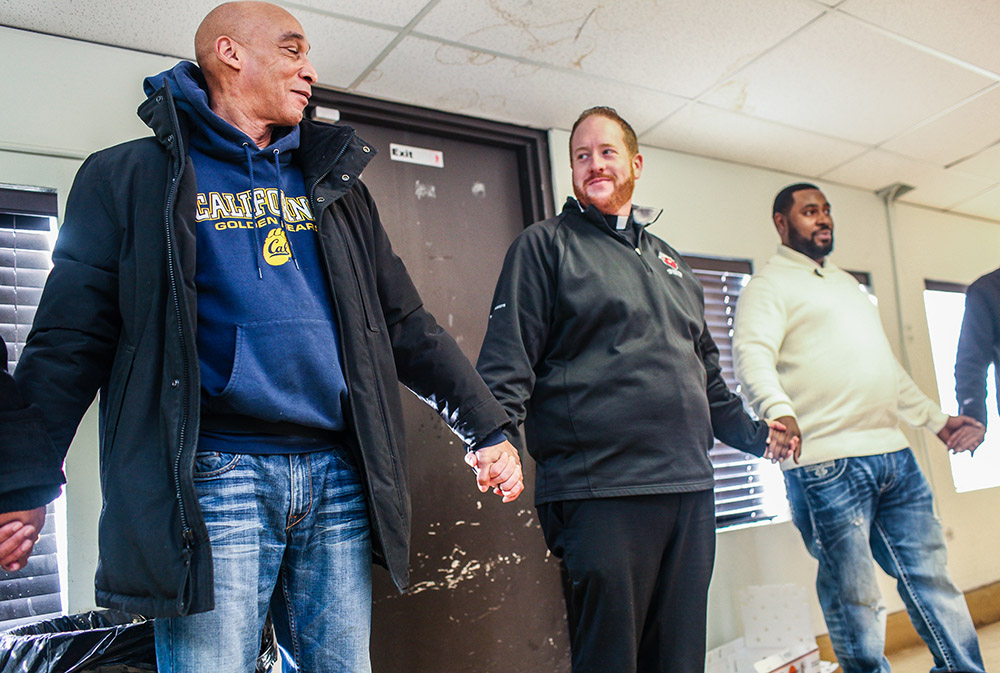 Fr. Matt O'Donnell, pastor of St. Columbanus Parish in Chicago, prays with volunteers before they open the church's Wednesday food pantry in a file photo. In 2020, the church received an estimated $70,000 in Paycheck Protection Program loans and its school received $120,000. (CNS/Courtesy of Natalie Battaglia)

St. Frances Academy is not only the oldest Catholic school in the Baltimore Archdiocese, but the oldest historically African American educational institution in the United States. Founded in 1828 with a mission to teach children of color to read the Bible in the slave state of Maryland, the school managed to survive during the Civil War, but when the COVID-19 pandemic brought the country to a halt last March, its future was uncertain.

"The population we serve is the first to feel an economic crisis and they're going to be the last to recover from it," St. Frances Academy president Curtis Turner told NCR.

The school serves 210 high school students, 65% of whom receive free or reduced lunch, meaning they are legally defined as impoverished. The school also provides a dormitory residence for 40 students, half of whom are legally homeless. Included in its 27-member staff are two full-time psychologists who coordinate the institution's extensive mental health support programming.

"This community was hit very hard," said Turner, recalling the early days of the pandemic. As the school considered draconian measures, such as cutting student financial aid in order to keep its doors open, the federal government's Paycheck Protection Program (PPP) provided a lifeline.

St. Frances Academy received $350,000 in federal aid, which, according to Turner, meant "we didn't have to make those difficult decisions." The school operates on a $2.1 million annual budget, only 35% of which is met by tuition. The rest is made up of grants and donor support, which were no longer certain due to the pandemic. 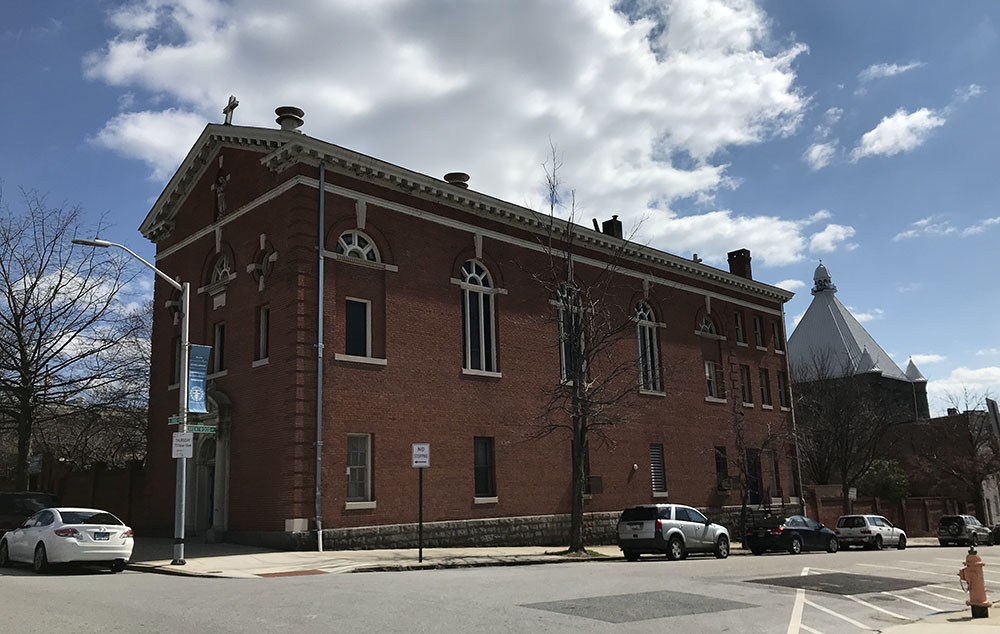 St. Frances Academy in the Baltimore Archdiocese: With the Paycheck Protection Program, "our staff could still be in place to serve the kids," says the principal, Curtis Turner. "Every single dime went to an employee that would have been laid off." (Wikimedia Commons/Baltimore Heritage/Eli Pousson)

"When the PPP came along, our staff could still be in place to serve the kids," he said. "Every single dime went to an employee that would have been laid off."

A Feb. 4 Associated Press article reported that Catholic institutions throughout the country received at least $3 billion in aid from the Payroll Protection Program, a core component of the CARES Act passed by Congress in March 2020. The program provided $349 billion in payroll support.

The article also alleges that the Roman Catholic Church was perhaps "the biggest beneficiary of the paycheck program" and that funds were collected from the program at a time when the church held more than $10 billion in assets that could have been used to meet financial needs, rather than utilizing federal aid.

Yet some church finance experts disagree with such a characterization, noting that the Catholic Church in the United States is made up of nearly 200 individual dioceses and thousands of individual parishes and schools — like St. Frances Academy — and that each entity faces its own particular financial profile and needs.

The Associated Press article "interpreted the data as if there's one Catholic Church in the United States," said Matthew Manion, faculty director of the Center for Church Management at Villanova University. "I think it's a little misleading to roll up all of the individual churches and entities and make a statement about it as one church."

"It's one church theologically, but it's not one church administratively," Manion added.

Betsy Bohlen, chief operating officer of the Chicago Archdiocese, told NCR that at the time the Paycheck Protection Program was rolled out, all of the parishes in the archdiocese were closed for public services.

'Most parishes were facing very dire situations. The PPP loans were meant to keep people employed, which is exactly what they did.'

"We estimate that at the time the pandemic began, online giving was no more than 15% of revenue," she said, noting that 85% of the revenue that "comes in through the basket on the weekends was gone."

"Most parishes were facing very dire situations," Bohlen added. "The PPP loans were meant to keep people employed, which is exactly what they did."

Russell Elmayan, chief financial officer and chief administrative officer of the Diocese of Raleigh, North Carolina, described a similar situation, categorizing 2020 as "the most financially challenging year" in his three decades of working for the church.

According to Elmayan, "When the Payroll Protection Program was offered during this time when we had no idea how long the severe drop in parish offertory would continue, we felt it was an appropriate and necessary lifeline to preserve the nearly 3,000 jobs in our parishes, missions and schools to continue to provide ministry and services."

"Parish offertory remains approximately 10 percent below the prior year at this time," he added. "Since offertory is by far the largest part of the revenue stream for any parish, the PPP loans clearly saved jobs and kept people employed, which is what they were designed to do." 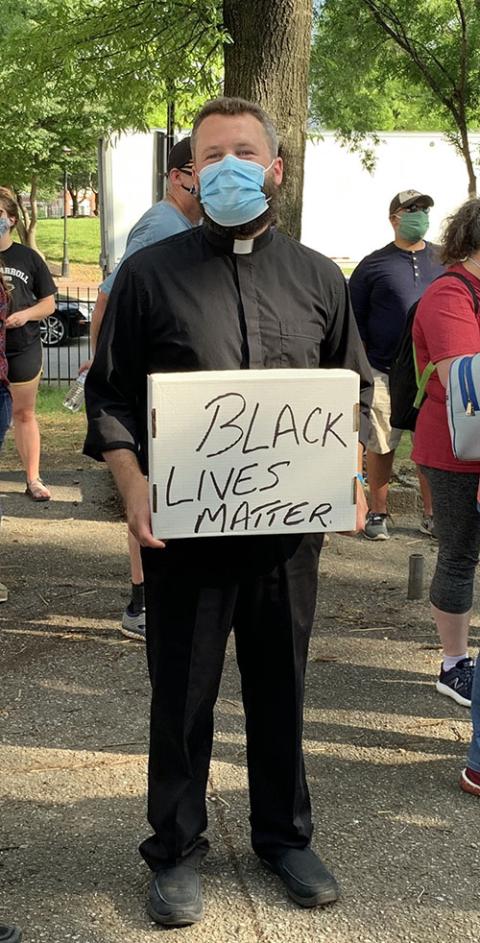 Fr. Joshua Laws, pastor of the Catholic Community of South Baltimore, which consists of three different churches, said that during the first month of the pandemic, giving was down by 35%.

Laws said his community received $40,000 in Paycheck Protection Program loans, which covered salaries for eight weeks and "bought us time."

"We're not a wealthy parish and that help was really essential," he told NCR. "Timing was everything. We absolutely needed that help when it came."

"The dignity of labor is central to Catholic social teaching," economist Anthony Annett, a Gabelli Fellow at Fordham University, told NCR. "Accordingly, the church is called to respect the rights of its workers in line with this teaching. Perhaps the most important aspect here is the need to pay a just wage, which Pope John Paul II referred to as 'the concrete means of verifying the justice of the whole socioeconomic system.' "

"In light of this, it was appropriate for Catholic dioceses to access the Paycheck Protection Program to promote the dignity of their workers," said Annett.

According to Manion, the decline in parish giving — the major source of weekly income for Catholic churches — is widespread. In November 2020, he and his Villanova colleague Alicia Strandberg released a study of "COVID-19 Impact on Parish Collections," which, based on 2020 giving during the pandemic, projects a 24% decline in collections for the 2021 financial year.

Should such a decline occur, the "Catholic Church will have $1.6 billion less to fulfill its mission," Manion and Strandberg conclude in the study, adding, "Unless more parishes turn things around ... there will likely be significant layoffs, reduction in parish services, more diocesan bankruptcies and parish closures in the year ahead."

While the Associated Press noted that the Catholic entities availed themselves of federal aid at time when there were assets available to dioceses that could have been utilized to cover parish and school payroll expenses during the pandemic, diocesan officials disagreed.

According to the Feb. 4 report, the Chicago Archdiocese had "more than $1 billion in cash and investments" as of May 2020.

Yet Bohlen told NCR, "The issue is not about liquidity, the issue is about availability. When we have assets, but they're offset by a liability, there's no extra availability."

"These liabilities include accrued pension liabilities, pre-paid cemetery services, deposits of parishes that cannot be commingled, bond and bank debt, and insurance claims," according to the archdiocesan statement. "These liabilities must be paid, and the Archdiocese, as a not-for-profit entity, uses its assets for those pre-existing liabilities."

In North Carolina, Elmayan also took issue with the Associated Press report for not making a similar distinction.

"This amounts to two months of operating expenses, which is below most generally accepted standards regarding the amount of reserves an organization should have to conduct day to day operations," Elmayan added.

Both Bohlen and Elmayan emphasized that dioceses do not have the option to use restricted funds other than for its designated purpose and to do otherwise would be ethically wrong and illegal.

Fr. Matthew O'Donnell, pastor of St. Columbanus Church in Chicago's South Side, told NCR that he received Paycheck Protection Program funding for both the parish and its Augustus Tolton Catholic Academy. 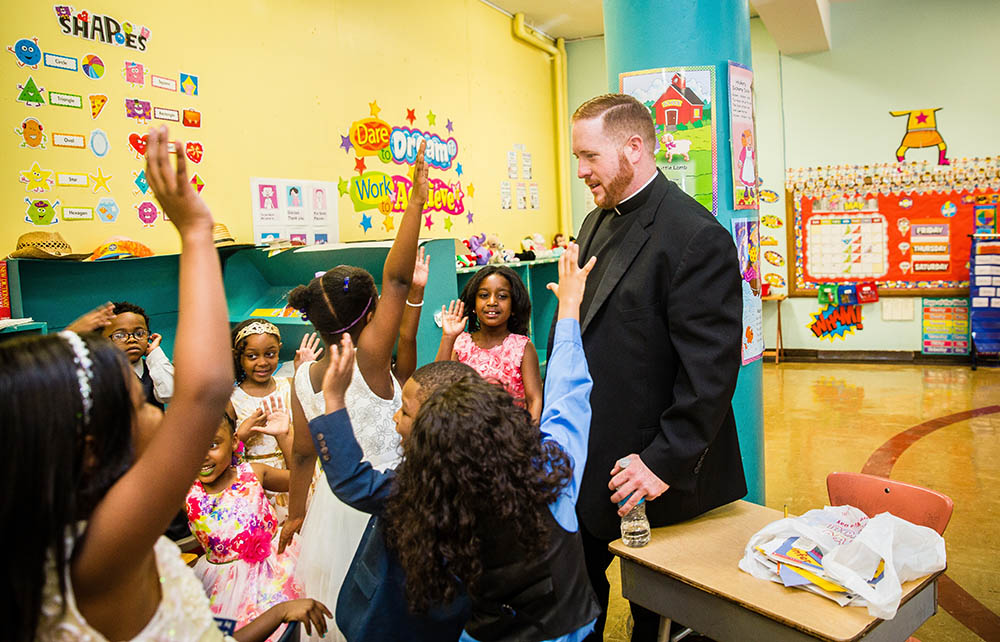 Fr. Matt O'Donnell, pastor of St. Columbanus Parish on Chicago's South Side, talks with kindergarten students at Augustus Tolton Catholic Academy before their graduation ceremony in 2017. (CNS/Courtesy of Natalie Battaglia)

He said the funding was essential for retaining the church's staff of seven employees and the 15 employees at the school, with the church receiving an estimated $70,000 in PPP loans and the school receiving $120,000.

"We're a community in one of the hardest-hit areas of COVID infection rates," O'Donnell said. "We're often doing things to help people who have experienced job loss, responding to violence that happens in the city, and we run a food pantry that feeds 500 people a week."

The Paycheck Protection Program "allowed us to make sure all of our full-time and part-time employees did not have to be furloughed, especially when there was a lot of uncertainty about what the future would be."

"The purpose for PPP was to ensure that small businesses had the opportunity to keep people employed. We were able to do that," he said, noting that by doing so, the benefits reached beyond employees on payroll.

"The program also allowed us to continue to serve people in our neighborhood."

Editor's note: The National Catholic Reporter Publishing Company, which is a non-profit company with no administrative or financial connections to the church, was granted a $512,000 loan through the Payroll Protection Plan last April. NCR CEO and Publisher Bill Mitchell said the company expects the loan to be forgiven as a result of satisfying the terms of the PPP program. NCR did not apply for a loan in the plan's second phase because it did not qualify under its requirements, Mitchell said.