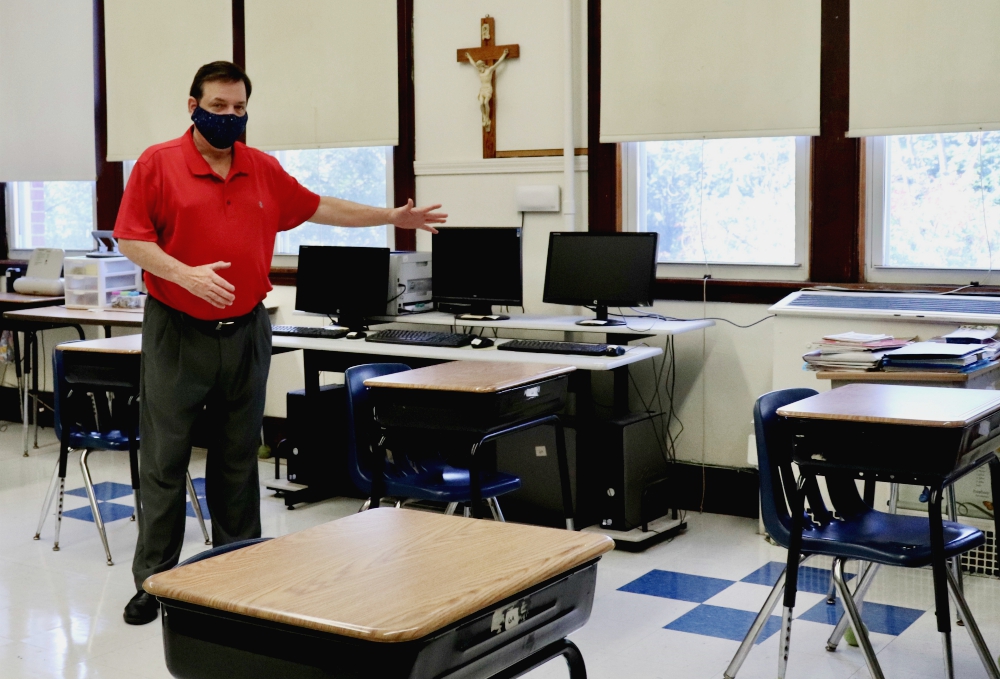 Principal Robert Chevrier shows off a socially distanced sixth-grade classroom at St. Joseph School in Medford, Massachusetts, July 28. Soon the desks will all have plastic dividers as well. (Alexander Thompson)

It has been a busy summer for Robert Chevrier.

Chevrier is the principal of St. Joseph School which serves about 210 students from preschool through eighth grade in this Boston suburb.

"We decided that we're going to open up in-person but also stream classes for those parents who don't want to send their child, yet, into school," he said.

Coming to that decision took time. Chevrier spent the summer sending surveys to parents and teachers, meeting with a reopening committee and ordering safety equipment.

The principal estimates that just over half of students will return in-person. He believes that the school's small size, social distancing and Massachusetts' flattened curve will allow the school to reopen its doors safely.

"Most are trying to do in person," Kathy Mears, the CEO of the National Catholic Education Association, said. "It's what most people want, keeping in mind however that everybody understands that the safety of children comes first, and the safety of teachers comes first."

Catholic schools' emphasis on in-person instruction, even in major cities like Chicago and St. Louis, is in stark contrast with major public school districts like San Diego, Atlanta, Denver and Houston, which have already announced they will start the year virtually.

There are number of reasons why Catholic schools feel they can and need to return in-person. They are often smaller and more flexible than public schools, making it easier to implement social distancing and other safety protocols.

At the same time, "Catholic education's real strength are the communities we form," said Mears. Whether school Masses or the bonds formed in the classroom, many core elements of Catholic education are more difficult over a Zoom session.

Dioceses nationwide are stocking up on personal protective equipment, dividing students into cohorts to reduce the potential for transmission and spending "more money than they ever have on cleaning," Mears said.

Those were the kinds of measures that the Los Angeles Archdiocese, the nation's largest Catholic school system, was preparing to implement when it said July 15 that its 72,000 students would return to the classroom this fall.

Three days later, the archdiocese had to reverse course. California Gov. Gavin Newsom announced new reopening guidelines that require counties to score well on a number of health metrics before they can open schools.

The three counties served by the archdiocese do not meet the requirements and very likely will not by late August, meaning that Los Angeles Catholic schools will be distance learning for the start of the year.

He believes Catholic schools could have reopened safely, but the state decided to reopen other sectors before schools, accelerating the epidemic and jeopardizing the return to the classroom. 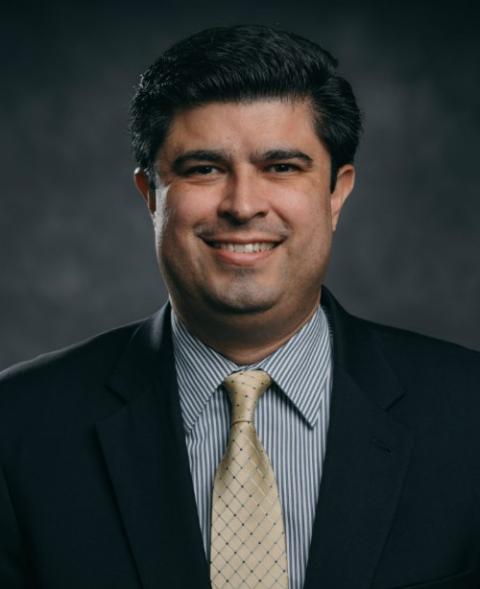 "Once again, children are getting the worse end of the bargain here, and parents feel like kids are being put last right now, not first, in terms of our priorities," Escala said.

The superintendent worries the burden will fall hardest on the most financially disadvantaged parents who need their children in school so they can work their essential jobs.

When parents struggle financially, that is bad news for tuition-dependent Catholic schools.

Approximately 135 Catholic schools nationwide have closed already this year, some due to the pandemic's impact on their budgets, according to Mears.

"Parents are on the fence," she said. "What if they lose their job and can't pay that tuition or they're thinking is it worth it to pay tuition for an online experience?"

Those worries are pushing Catholic schools to announce their plans sooner rather than later and fueling the trend toward in-person reopening. Some dioceses are even using the divergence from local public schools to bolster their finances.

The Diocese of Manchester, New Hampshire, is pushing that strategy the furthest with its "See You in Class!" marketing campaign.

The diocese's schools are promising that they will be in-person this fall while many local public schools are opting for a virtual start.

"In partnering with our parents and listening to them, the vast majority wanted to be back in school," Superintendent David Thibault said.

The diocese is hoping it is not just Catholic school parents who want their kids back in-person.

It is offering a $1,000 tuition cut for students in Grades 1-8 and $2,000 for high school students transferring from a non-Catholic school in their first year. The young students would receive a further $500 and the high schoolers $1,000 in the second year.

"We've probably been in discussion in the public square in New Hampshire more than we've ever been, and the [transfer incentive] program is probably a big catalyst for that," Thibault said.

One high school in the diocese has already seen 33 new enrollments in the first two weeks of the program and another is still sorting through 87 applications.

Not everyone is on board with the quick pace of reopening by Catholic dioceses around the country. 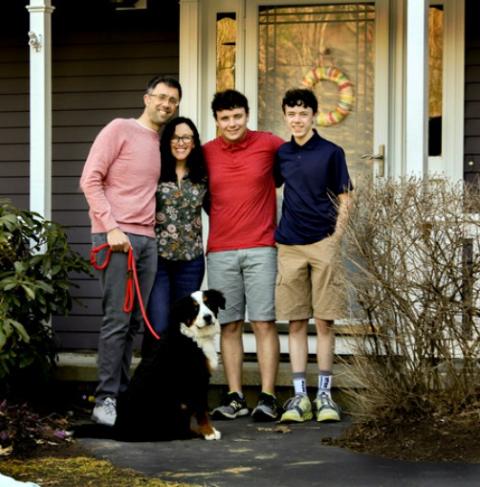 Katie Fiermonti, 42, is a writer and parent of two sons, a rising senior and freshman, at St. Thomas Aquinas High School in Dover, New Hampshire, part of the Manchester Diocese.

Fiermonti loves Aquinas and said her sons have had an excellent experience there, but she worries that in-person instruction is not safe for vulnerable teachers and students and could turn schools into transmission hot spots.

The high school is still developing its reopening plan, and Fiermonti wants it to include an all-virtual option along with the in-person option mandated by the diocese. If it does not, the family may consider moving their children back to public schools.

She has reservations about the "See You in Class!" campaign.

"It's very bold," she said. "I worry that there's a little bit of hubris to that."

Teachers and their unions across the country have also been skeptical of a return to the classroom.

Kathryn Williams-Heese is a Spanish teacher at Bishop DuBourg High School in St. Louis and president of the St. Louis Archdiocesan Teachers Association, a union representing 145 teachers at a number of Catholic high schools in the region.

The St. Louis Archdiocese has announced an in-person return this fall.

Williams-Heese is concerned about safety but was reassured by discussions with archdiocesan administrators that the return can be done safely.

This story appears in the Reopening post pandemic feature series. View the full series.
A version of this story appeared in the Aug 21-Sept 3, 2020 print issue under the headline: Catholic schools plan to re-open classes, in contrast to public schools.