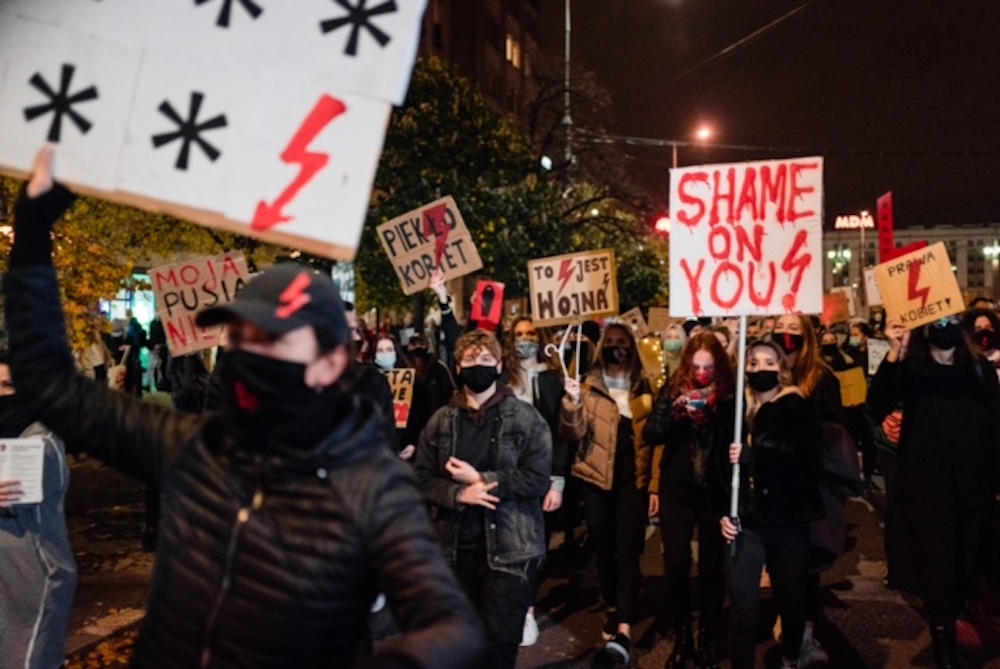 Polish women are making it clear: They've had enough. Their protests against the Law and Justice government and against the Catholic Church continue to gain momentum.

The rage was ignited Oct. 22 when a ruling by Poland's Constitutional Tribunal imposed an almost total ban on abortion. Current Polish abortion law, among the most restrictive in Europe, allows a pregnancy to be terminated only if the mother's life is in danger, in cases of incest and rape, or if there are fetal abnormalities.

The new ruling would no longer allow abortion in the case of fetal abnormality, which at present accounts for 97% of all the abortions performed in Poland.

Organizers are planning regular demonstrations every Monday in the coming weeks, according to Marta Lempart, head of Strajk Kobiet, the Polish "Women's Strike" movement. The grassroots organization plays a leading role in the demonstrations that have been taking place throughout Poland since the tribunal's ruling. So far that includes 580 cities and towns, Lempart, who comes from a Catholic background, told NCR.

The movement's logo, designed by Warsaw feminist Ola Jasionowska, is a red lightning bolt that's meant as a warning against depriving women of their basic human rights.

As the sense of outrage over the ruling continued to grow, demonstrations throughout the country Oct. 30 drew an estimated 430,000 protesters, with as many as 100,000 in Warsaw alone. These demonstrations were the largest in Poland since the collapse of its communist government in 1989.

One of the protesters described this as the free expression of anger by a group unified by a sense of community.

Liza Galicia, 29, a documentary producer and Catholic, was part of the huge crowd that demonstrated in Warsaw, singing and carrying placards that called for an end to restrictions on abortion. In a telephone interview, Galicia said she couldn't believe that she had to march for her rights.

"I was marching with thousands of other people so that one day I will have a right to decide about my body," she said. She was marching despite her fear of contracting COVID-19, which is spiking in Poland as throughout most of Europe.

For the first time in Catholic Poland, the demonstrators also took their protest into the churches. Never before has the country seen pro-choice protestors enter churches and disrupt services. In the city of Poznan, in western Poland, for example, some 20 men and women conducted a sit-in before the altar in a Catholic church. They chanted and held up banners that said "you have blood on your hands," and "let us pray for abortions."

Spray-painted on the cathedral in Warsaw and on other Polish churches were slogans such as "abortion is okay."

The Catholic Church in Poland is unwavering in its support for the ruling far-right Law and Justice party led by Jaroslaw Kaczynski, and priests in conservative rural areas often tell parishioners to vote for the Law and Justice candidate in their district.

Kaczynski is a fierce opponent of abortion. He has called the protestors "barbarians," accusing them of trying to destroy Poland. "This is war," he roared at a recent meeting of parliament. In 2016, he insisted that women should give birth to badly deformed fetuses and that children should be born even if they were certain to die at birth. They should be baptized, given a name, and buried, he said. 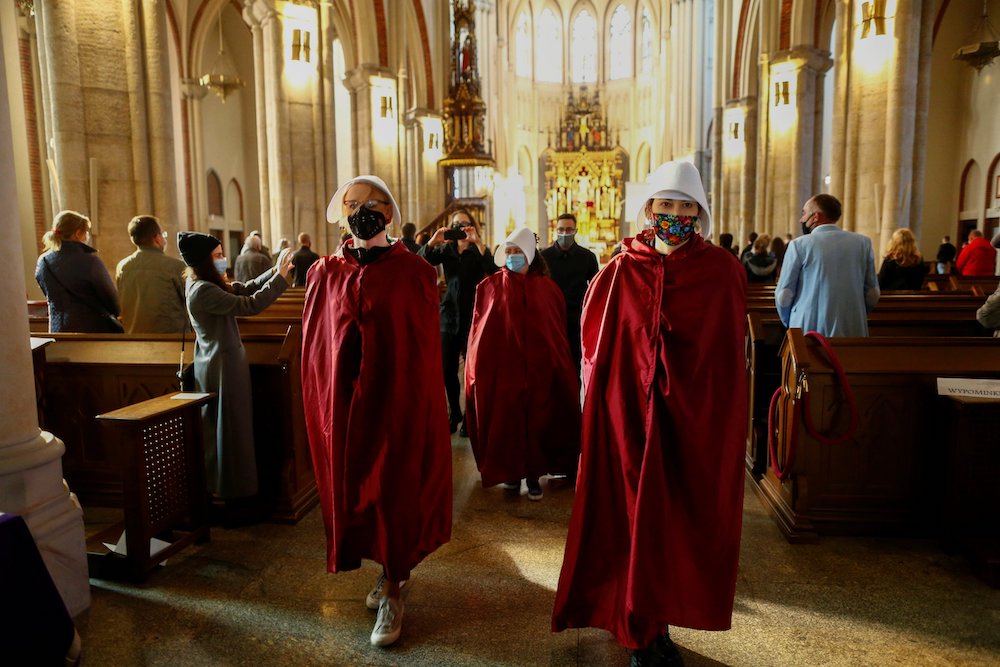 Demonstrators protest Oct. 25 in the Archcathedral Basilica of St. Stanislaus Kostka in Lodz, Poland, against the ruling by Poland's Constitutional Tribunal that imposes a near-total abortion ban. (CNS/Agencja Gazeta via Reuters/Marcin Stepien)

A sampling of opinion from other young Catholics reveals their anger and growing frustration with an increasingly authoritarian government.

"What makes me outraged is how you can say we oppose abortion to save lives and then deliver a fetus that will die shortly after birth," said Anna, 22, a law student at Jagiellonian University in Krakow, who asked that he last name not be used in case of possible repercussions at her school.

"It makes no sense," she said.

Agnieszka, 27, a student who also asked that her last name not be used, complained that when she became pregnant there was no sex education or counseling. "A huge number of women have abortions each year in Poland, regardless of whether the procedure is legal or not," she said, noting that many also travel to neighboring Slovakia and Germany to terminate pregnancies.

Agnieszka said she normally does not attend large protests but was happy that she went to the one in Warsaw. "I felt as if the whole crowd of people hugged me and said what I went through was okay, and that I am not alone," she said.

Beate Pisarczyk-Zabiciel, 44, an English teacher in Zamosc, a small town in eastern Poland, said in a telephone interview that she feels it is her duty to protest the growing erosion of democracy by the authoritarian Polish government.

"I am protesting in a small town which is considered to be supportive of the ruling Law and Justice party," she said, noting that the electorate in Zamosc is less educated and poorer than in some other areas of Poland. "That's why I think it's important to show there are dissidents here too."

Opinion surveys show that many Poles want easier access to abortion. Paulina Gorska, an assistant professor of psychology at Warsaw University, supplied the findings of a poll conducted Oct. 31.

This same poll found that 54% of respondents felt solidarity with the women's protest movement, while 43% did not.

Lempart says the "Women's Strike" movement wants fully legalized abortion up to 12 weeks, as is the case in most other European countries. According to statistics she provided, the majority of Poles — 69% — agree that abortion should be legalized, while 20% want to maintain the current restrictive law, and only 11% favor further restrictions.

She says her movement is not just about women's rights, but also about civil rights.

Adam Szostkiewicz, a former commentator for Polityka, a respected Polish opinion journal, also sees it as being a matter of civil rights.

"It's a civil rights movement," he said in a telephone interview. "And the big catalyst for action was the tribunal's ruling."

Nov. 9, 2020, tweet from @strajkkobiet. The text, translated by Google: "We invite you from pl. Union for a walk on Marshal's Street"

Saying the women want freedom and the right to choose whether or not to have a family, Szostkiewicz refuted the government propaganda that accuses the protestors of being enemies of the Catholic religion.

"There are many young Catholics who are participating in the marches because they think the right of a woman to decide about her body is valid," he said.

The Polish bishops' conference declined comment for this article, after repeated requests.

The tribunal's ruling cannot take effect until the government officially publishes it. Though originally scheduled for Nov. 2, the government Nov. 3 announced an indefinite delay on publication.

Lempart credits the demonstrations with influencing this delay. In her view, the government doesn't know what to do about the situation. If the tribunal's ruling is published, she says, the government knows there will be a whole network of resistance on legal and medical grounds. Her organization, for instance, is prepared to go to court to fight this ruling, she says, citing legal precedent for overturning a ruling by the tribunal.

As the protest movement continues to gather momentum, more and more people with a diversity of interests are being drawn in, such as taxi drivers and members of trade unions, who also allege that the government has not provided enough support for them during the pandemic.

Lempart hopes this convergence of different interests to ultimately result in a general strike against the government. 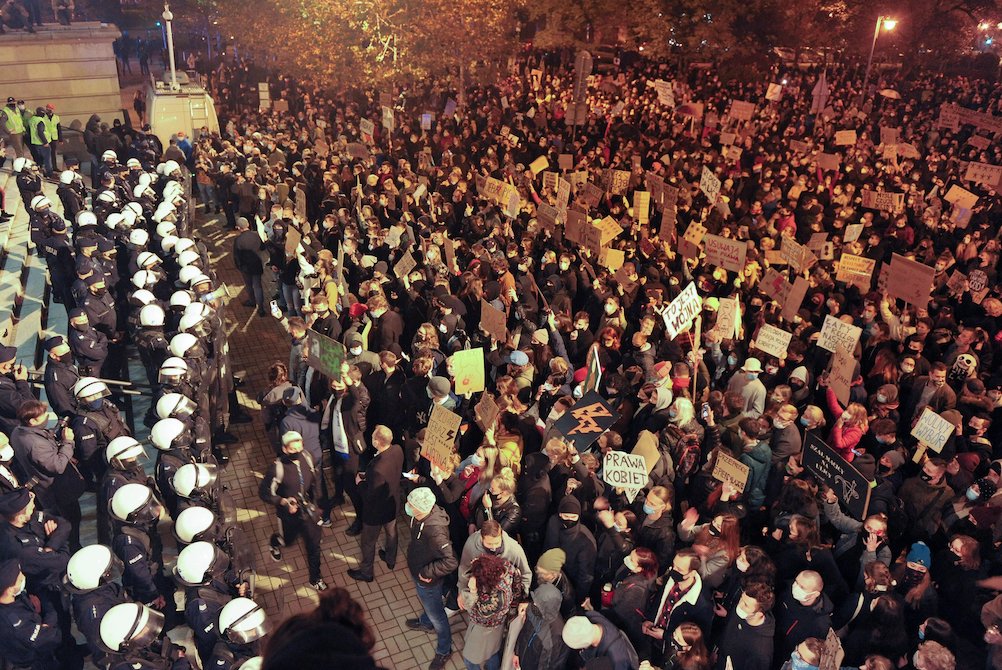 Demonstrators protest Oct. 25, in front of the Cathedral of Christ the King in Katowice, Poland, against the ruling by Poland's Constitutional Tribunal that imposes a near-total ban on abortion. (CNS/Agencja Gazeta via Reuters/Anna Lewanska)

[Donald Snyder is a former foreign correspondent, specializing in Germany and Eastern Europe. He worked at NBC News as a producer for 27 years until his retirement. Iwona Hoffman is a freelance writer and a graduate of Columbia Journalism School.]