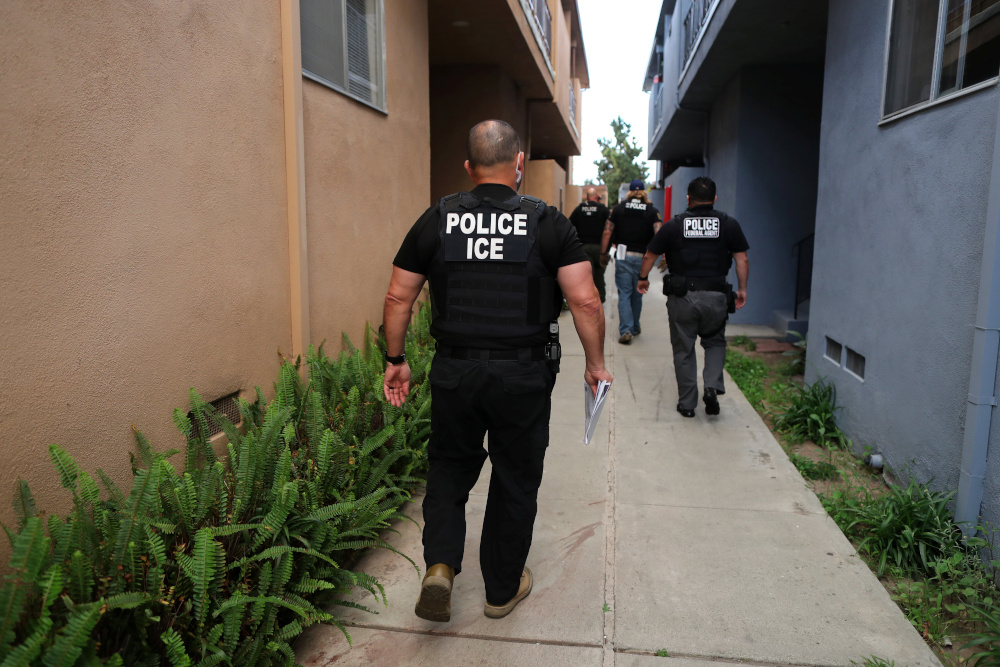 The Trump administration July 14 rescinded a rule it announced eight days ago that would have required international students to transfer or leave the country if their schools held classes entirely online because of the pandemic.

According to The Associated Press, the decision was announced at the beginning of a Boston hearing in a federal lawsuit against the rule by Harvard University and the Massachusetts Institute of Technology. U.S. District Judge Allison Burroughs said federal immigration authorities had agreed to rescind the directive and "return to the status quo."

U.S. Catholic college and university leaders had joined the nation's higher education community in condemning the policy announced by the Trump administration that would have prevented international students from remaining in or coming to the United States if their colleges use a completely online format in the fall semester due to the COVID-19 pandemic.

The temporary final rule — guidance for the Student and Exchange Visitor Program — was issued without notice July 6 by the U.S. Immigration and Customs Enforcement. Two days later, Harvard University and the Massachusetts Institute of Technology filed a lawsuit against the Trump administration in federal court in Boston over the policy, seeking a temporary order to block the administration from enforcing it.

The lawsuit said the goal of the new guidance seemed to be to "create as much chaos for universities and international students as possible."

College leaders called the administration's policy simply a means to force colleges to reopen and offer in-person classes at the time when colleges are finalizing their fall plans. Harvard University, for example, announced July 6 it would reopen its campus for undergraduates but that it would only conduct classes online.

The Association of Catholic Colleges and Universities, or ACCU, said the government's decision is "not only bad health policy, it is heartless."

"Allowing all students, regardless of country of origin, to be given equal access to online learning is the fair, sensible and moral thing to do. We can keep students safe and keep these young people on track," the July 8 statement said.

The Association of Jesuit Colleges and Universities, or AJCU, similarly expressed "grave concern" about this guidance and asked Acting Secretary of Homeland Security Chad Wolf to withdraw it immediately.

In a July 9 statement, the association said the guidance "does not recognize the critical need for flexibility as we continue to battle a new, virulent and changing disease" and also "disregards previous guidance issued in the spring that recognized the unprecedented nature of the coronavirus pandemic and provided our schools the necessary flexibility to prioritize the academic needs of all students as they transitioned to a virtual learning environment."

Catholic university presidents also have expressed their concern and frustration with the policy's announcement.

John DeGioia, president of Georgetown University in Washington, said in a July 8 letter to the school community that the university "strongly opposes this reckless action," which he said "creates new and unnecessary barriers for international students and puts their health, stability and academic progress at risk if they are unable to participate in classes in person."

He also said the university was joining other colleges and universities in submitting an amicus brief in federal court "opposing this new, damaging guidance."

In a July 7 blog post, Patricia McGuire, president of Trinity Washington University, said the Trump administration's action was "pushing two disgracefully irresponsible messages: the pandemic is no big deal, get over it; and, if U.S. universities want to enroll international students this fall then classes may not be online."

McGuire said: "Denying a safe education for international students, interrupting their academic progress and possibly forcing them to make premature departures from the U.S. with no guarantee of return, further diminishes the stature of the U.S. globally while causing untold hardship and needless stress for more than a million college students."

She said her campus was looking at options and "will do everything we can to take good care of our international students." School officials also are working with advocacy groups to see if there are legislative or legal solutions.

Holy Cross Father John Jenkins, president of the University of Notre Dame, also spoke out against the rule, even though Notre Dame has already announced it will have in-person classes, with a modified scheduled, in the fall.

In a July 8 letter to Acting Secretary Wolf, Jenkins said he was concerned about the government's "inhospitable, even hostile, approach toward visiting students and scholars who enrich our own learning and cultural environments."

"Having already overcome the hurdles of being accepted to an American university and authorized to travel and live here, foreign students now have to grapple with the uncertainty of being expelled from the country simply because of the way instruction is delivered," he wrote.

He said Notre Dame enrolls about 1,400 international students each year — all of whom are already vetted before their entry into the United States. This past March, when the university stopped its in-person teaching because of the pandemic, more than 100 foreign students were stranded on campus because of restrictions on air travel to certain countries and for other reasons.

Jenkins said he is proud Notre Dame accommodated these students whom he described as an essential part of the campus community. He said the international students not only add to university life, but they strengthen local economies, saying: "A 25% decline in international student enrollment this fall would result in a loss of approximately $10 billion and 114,000 jobs."

The timing of this guidance also is something school leaders said cannot be ignored.

As the AJCU put it: "This new guidance comes just months before our schools prepare to reopen for a new academic year, undermining our ability to provide continuity in instruction for international students, and ignoring the realities that colleges and universities are facing in trying to adjust to a landscape that changes by the day."

The ACCU pointed to the stark difference from this spring when "universities had to pivot on a dime to shift instruction online in order to keep students, faculty and local communities safe from contagion." It pointed out that then, international students were accommodated by the government and allowed to finish their courses online, despite policies against online education for international students.

The group, whose members are leaders from Catholic colleges and universities across the country, said to send the international students "home, without a degree, would force them to start their lives over simply because a university is trying to keep its faculty and students safe as contagion levels continue to be unpredictable."

"There are difficult decisions to make in challenging times, but this is not one of those," it added.

On July 10, California's attorney general filed a lawsuit challenging this policy and seeking a court order to prevent the government from enforcing it.

The attorneys general said in a statement the new rule and reversal of the previous guidance for colleges amid the pandemic fails to consider the health and safety of students, faculty and staff or the tremendous costs and administrative burden it would place on schools to readjust plans. It also "fails to consider that, for many international students, remote learning in their home countries is not possible."

They said the policy poses "significant financial harm to schools, as international students pay hundreds of millions of dollars in tuition, housing, dining and other fees," while it also "forces colleges and universities to offer in-person classes amid a pandemic or lose significant numbers of international students who will either have to leave the country, transfer or disenroll from the school."

(This story has been updated with new information on July 15, at 11 am ET.)