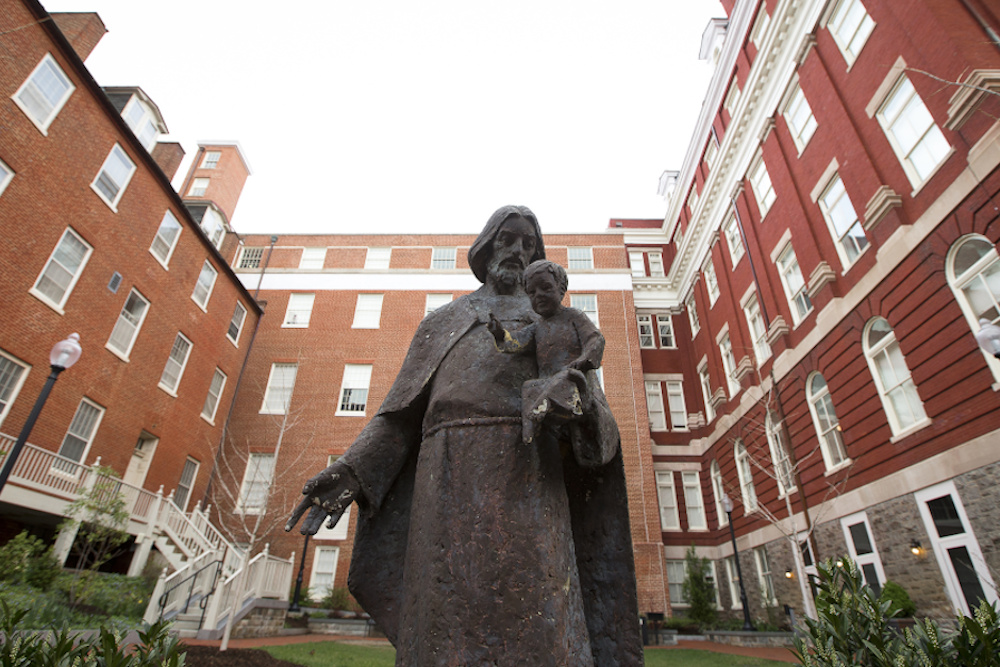 Mulledy Hall, also known as Freedom Hall, center, is seen on the campus of Georgetown University in 2017. The building will be renamed after Isaac Hawkins, the first enslaved person listed in the Jesuit university's documents on its selling of slaves. (CNS/Tyler Orsburn)

Heads of nine African American studies programs at Catholic universities are calling their institutions to "conversion" to take meaningful actions to address systemic racism and more fully support people of color on their campuses.

An open letter outlined a series of recommendations, including reviewing how campus police interact with Black students, faculty and staff. The letter, posted June 24 on the African American academic blog Black Perspectives, was signed by 10 chairs and directors of African American studies departments and programs at nine Catholic schools.

The professors said they stood in "full solidarity" with the protests that have erupted across the country in the past month following a series of high-profile killings of Black people "at the hands of predatory policing and white vigilantism." But "the protests in the streets will not be enough to transform our world," they said, nor will statements alone, such as those from several presidents of Catholic universities.

"The world is changing before our eyes, but it is not changing soon enough to stop the crisis facing Black life. Catholic Universities and Colleges across the U.S. can play a pivotal and leading role in the transformation being called for on America's streets. Symbolic statements, marches, token town halls, or other typical measures to pacify our campus communities are not sufficient while grave inequities persist," the letter said.

The academic leaders in their letter proposed a series of actions, including increased funding for African American studies programs and departments and steps to expand the number of Black faculty and students on campus. They also recommend allowing students and student-athletes to protest without reprisal, examining their own historical ties to slavery, developing partnerships with neighboring communities "instead of gentrifying those communities" and addressing relationships among campus police and Black members of the university community.

"Academic institutions such as ours have been as complicit in limiting Black potential as any other institution over the past two centuries or longer. We call for conversion: our institutions must reorient themselves to the common good, privileging the perspective of the most marginalized," their letter stated.

Vincent Lloyd, director of the Africana studies program at Villanova University, told NCR the current national focus on policing provides an opening for universities to revisit the issue of campus police.

"The whole nation is seeing the vulnerabilities that Black folks face with police and the policing culture that affects Blacks so much. So reopening those conversations seems really important," he said.

Lloyd has heard from students and teachers alike about situations where campus security approached and questioned why they were on campus. Such encounters, he said, make members of the university who are Black feel unwelcome. The move in 2016 to arm the university's sworn police officers raised tensions further. Students and faculty of color have begun sharing stories on the @blackvillanova Instagram account of their experiences with race on campus and addressed their concerns in a letter signed by nearly 1,000 current and past students.

As Catholic universities look to respond, and with tighter finances amid the coronavirus pandemic, Lloyd said schools should direct investments less toward diversity officers and more to academic programs like African American studies. Converting more African American studies programs to departments — as the case at three of the nine schools in the letter — symbolizes their importance and permanence to the school, he added, and more practically, insulates them from budget cycles and allows for hiring their own faculty, rather than relying on other departments.

Lloyd said such a move fits with the emphasis Catholic universities place on mission, and would signal their intention to lead on addressing systemic racism.

"Catholic universities are uniquely positioned to be leaders on these issues, to model for all academic institutions what it means to take seriously one of these original sins of our nation," he said.

Calls have grown in recent weeks for Catholic colleges to better address race. At Notre Dame, students and graduates of its Alliance for Catholic Education teaching fellows program have asked for additional training on addressing race, power and privilege in the classroom.

Earlier this week, more than 500 alumni of Fairfield University in Connecticut, criticized President Mark Nemec for not using the phrase "Black lives matter" in his responses to the deaths of Floyd and other Black Americans who were killed in confrontations with police. A Change.org petition said the Jesuit university has failed to address racism on campus and proposed it form an anti-racist steering committee to implement a series of recommendations — among them, curriculum changes to better address race, class and gender, and budgeting at least 20% of money raised during an annual fundraising day to further anti-racist education.

"We urge the University to boldly support the Black community by taking action to make us certain that it believes Black lives matter, too," the alumni said.

The faculty open letter called on Catholic colleges to "support all efforts to excavate" their historical involvement in the slave trade and how they profited directly or indirectly from it.

In 2017, Georgetown and the Jesuits apologized for their role in slavery, including the 1838 sale of 272 enslaved people — what is considered one of the largest sales of humans in U.S. history. The university began in 2015 intensively studying its history with slavery.

During the spring 2019 semester, Georgetown students overwhelmingly voted to establish a new student fee to provide reparations to descendants of the 272 slaves owned and sold by the school. In October, the university announced plans for a $400,000 annual reparations fund, though some students criticized its reliance on philanthropy rather than direct university funds.

Along with Georgetown, Xavier University in Cincinnati, and St. Louis University are Catholic schools part of the Universities Studying Slavery collaborative. In 2016, St. Louis University and the Jesuits' central and southern province began an inquiry into the school's and religious order's entanglement in slavery through the Slavery, History, Memory and Reconciliation Project.

Christopher Tinson, director of the African American studies program at St. Louis University who also signed the open letter, said the school must become "a space of critical understanding" of how the country arrived at its latest moment of confronting racism.

"These are times that can bring people together in solidarity or rip us apart," he said in a message on the program's website.

"These are times that can bring people together in solidarity or rip us apart."

Tinson said it's been these moments that historically provided leaders the urgency to act. Locally, he attributed progress to the uprising in Ferguson, Missouri, a St. Louis suburb, following the 2014 fatal shooting of Michael Brown by a white police officer.

Part of the response now at St. Louis University, Tinson told NCR in an email, is not just referencing but reigniting the Clock Tower Accords created in response to unrest after Brown's death. He said now is the time to reassess progress on the 13 points outlined in the accords, which included increasing the budget for African American studies, rebuilding relationships with the neighboring Black community and funding new justice and equity initiatives on campus.

"We have the potential to be exceptional, visionary, bold, and committed to deep structural changes that would enable thriving," Tinson said in his message. "But whether we reach our potential or snap back into silence and acquiescence when the smoke clears, boards come down from windows, and curfews are lifted is once and always up to us."