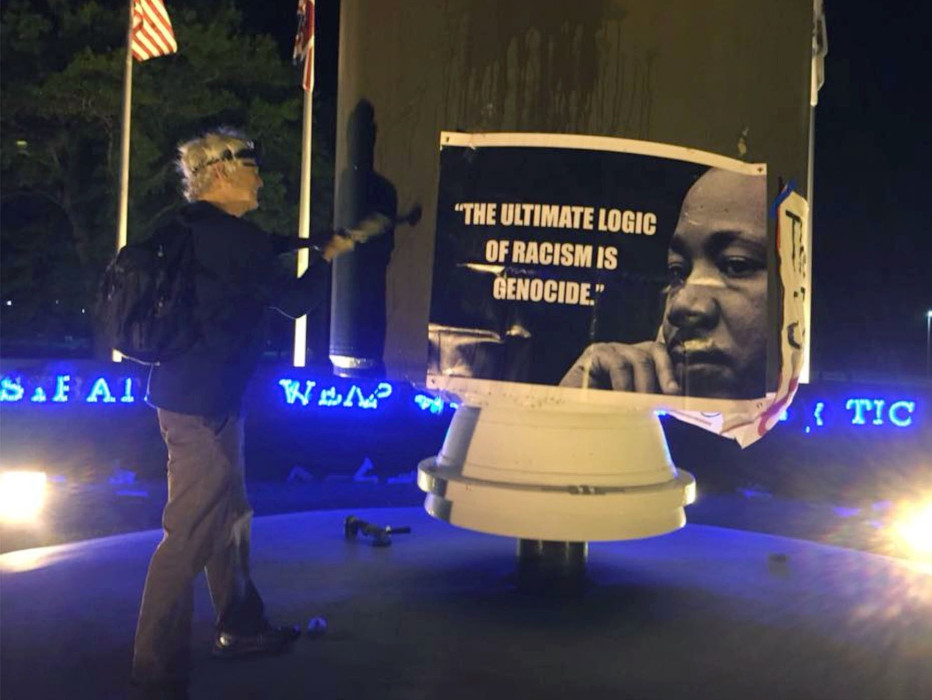 Patrick O’Neill attempts to deface a nuclear monument with a hammer at the Kings Bay Submarine Base in April 2018. (Courtesy of the Kings Bay Plowshares 7)

Patrick O'Neill, who together with the Rev. Stephen Kelly, cut a padlock to Kings Bay Naval Base in Georgia to protest its stockpile of hundreds of Trident nuclear weapons two years ago, was sentenced Oct. 16 to 14 months in federal prison.

O'Neill, a 64-year-old North Carolinian who runs a Catholic Worker House that offers destitute women and children a place to stay, said he would appeal.

He is the third of the Kings Bay Plowshares 7 to be sentenced by U.S. District Court Judge Lisa Godbey Wood and has so far received the lightest sentence. On Thursday, Wood sentenced Kelly, a Jesuit priest, to 33 months — essentially time he has already spent at the Brunswick County, Georgia, jail. Wood also ordered three years of probation and restitution to both men for their part in the $33,503 worth of damages at the base.

On April 4, 2018, the group, made up of fellow Catholics, cut a padlock and later a security fence at Kings Bay Naval Base, which houses six Trident submarines carrying hundreds of nuclear weapons. They spilled blood on a Navy wall insignia, spray-painted anti-war slogans on a walkway and banged on a monument to nuclear warfare.

Last year, all seven were convicted of destruction of property on a naval installation, depredation of government property, trespass and conspiracy.

"We are bound by the laws of this country," Wood said. "Part of what you and co-defendants profess is that you want to show courage in violating these laws and doing it, as you say, in the most dramatic way. Well, part of courage is accepting punishment."

Four other collaborators in the symbolic nuclear disarmament action will go before the judge in November or later.

O'Neill presented three character witnesses before his sentence, including two of his eight children, who testified to their father's commitment to living out their Christian faith and sharing all they have with the poor. O'Neill and his wife, Mary Rider, run the Charlie Mulholland Catholic Worker House in Garner, a suburb of Raleigh, North Carolina. 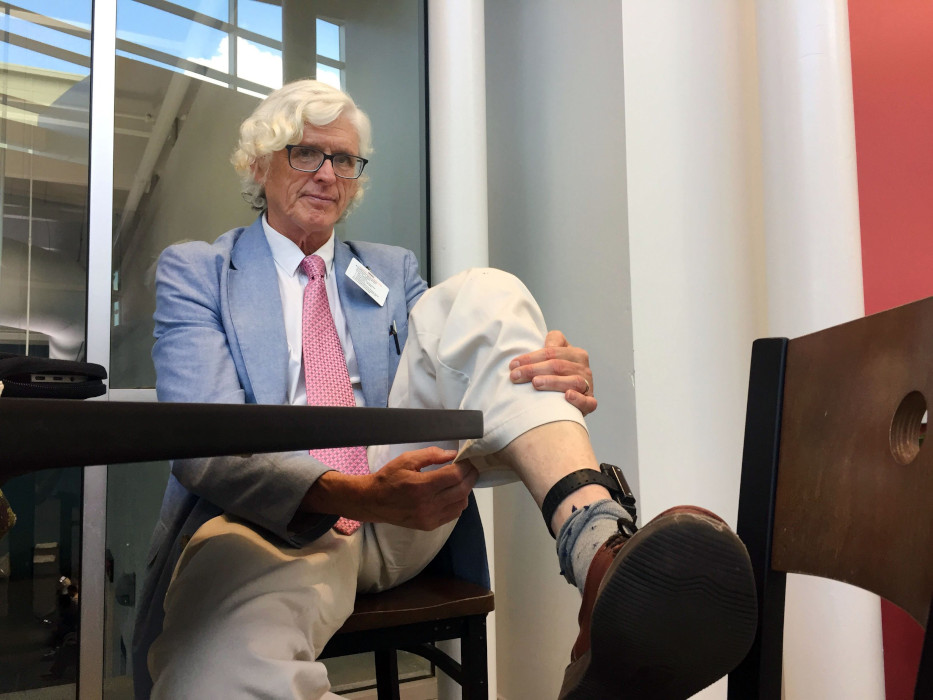 Patrick O’Neill is one of the Plowshares 7. He used a hammer to try to deface a nuclear monument at the Kings Bay Submarine Base last year. O’Neill is awaiting trial and wears an ankle monitor. (RNS/Yonat Shimron)

"They centered their life on the questions: Who was Jesus? What was he all about, and especially, what does he require of us?" said Bernadette Naro, O'Neill's daughter, referring to her parents.

"My dad taught me to dig into these questions ... His life is guided by the question of what it means to be a Christian, not in words but in lived reality," she said.

That testimony appeared to have some influence over Wood. But in the end she judged that the group — and O'Neill who banged on a monument to nuclear weapons with a hammer made from a melted-down gun — endangered their lives and the lives of the people working on the base by breaking in under the cover of night.

O'Neill, a longtime activist and a journalist, gave a lengthy statement before his sentence, lamenting that the court considered nuclear weapons and their potential to bring about an end to civilization irrelevant to the case.

"Rather than criminals, we are messengers, just like the abolitionists were in the face of legalized slavery, or pacifists who went to prison rather than kill," O'Neill said. "And we took a chance, risked our freedom, and were mischaracterized by this court as threats to the safety of the community."

O'Neill was given 90 days to report to prison.