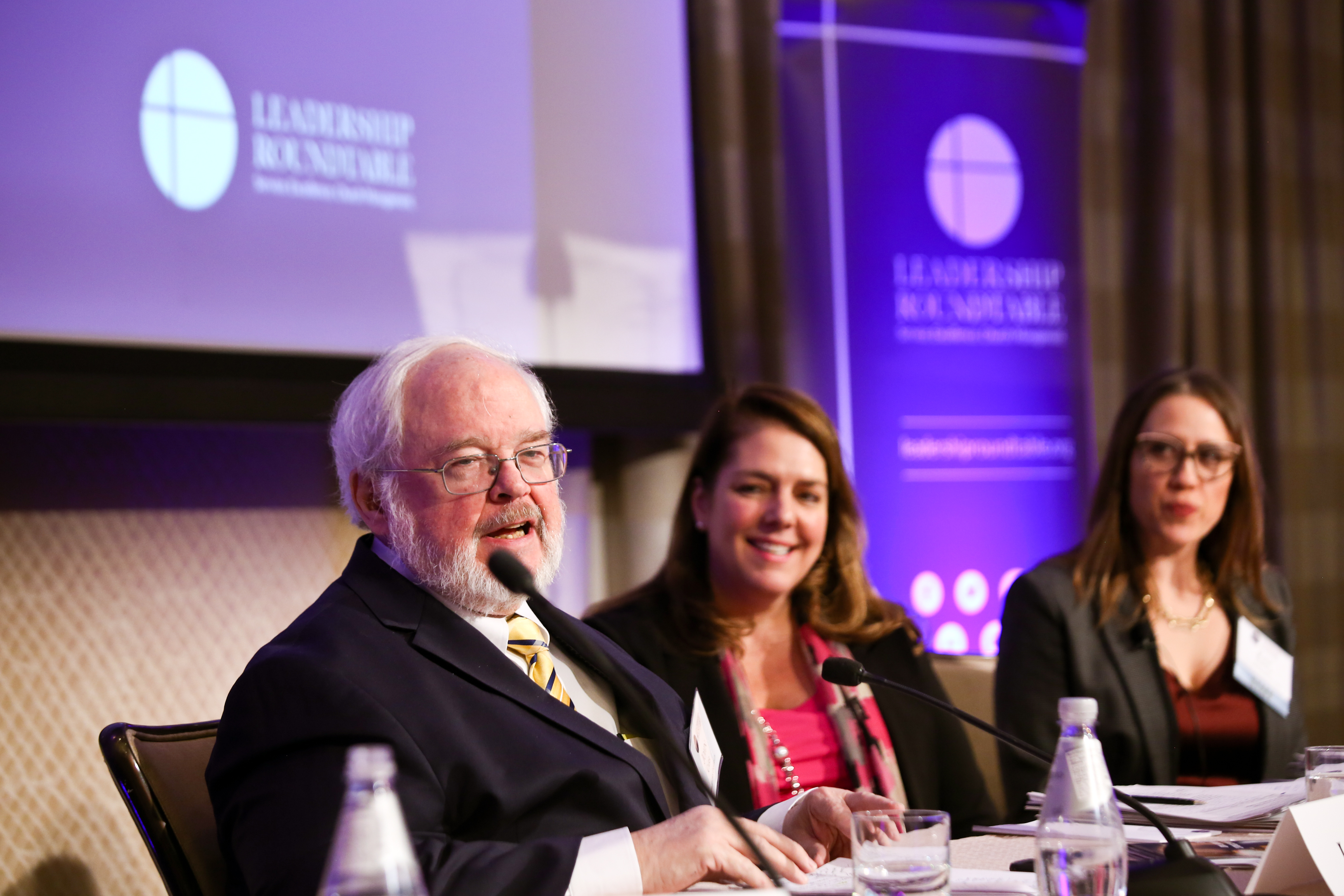 John Carr, director of the Initiative on Catholic Social Thought and Public Life at Georgetown University and an abuse survivor, speaks during a Feb. 1, 2019, panel discussion at the Leadership Roundtable's Catholic Partnership Summit in Washington to put forth possible solutions to the church's sex abuse crisis. (CNS photo/courtesy Leadership Roundtable/Ralph Alswang)

If there were a compass mark for a true-north Catholic, John Carr could well be the setting.

He defies the divisions within the Catholic community because he's not divided on anything when it comes to the church. You can't bait him into the culture wars because there is no war within him. For him, the seamless garment is more than metaphor. He wears it well and, in it, walks right down the middle of whatever tensions he may find himself mediating these days as moderator of endless discussions in his role as director of the Initiative on Catholic Social Thought and Public Life at Georgetown University.

But the conduct of the leaders of the institution he has served his entire life, many of them friends and a few, former bosses, has pushed his forbearance to the limit. "The patience of the people of God is exhausted with the episcopal and clerical culture that puts itself first," he said.

That was the final line he spoke at the end of a Feb. 2 news conference following two days of discussions of the clergy sex abuse crisis organized here by the Leadership Roundtable, a group of lay, religious and clergy founded to promote best management practices within the church. At the meeting were more than 200 people at more than 20 tables of participants, including Cardinals Sean O'Malley of Boston, Joseph Tobin of Newark, New Jersey, and Blase Cupich of Chicago. Joining them were 12 bishops, along with theologians, canon lawyers, abuse survivors, assorted experts from across the country, the papal nuncio and Jesuit Fr. Hans Zollner, the head of the office of child protection at the Vatican. Such a collection of people was perhaps a sign that the patience had run out and that something significant needs to be done.

During the news conference Carr offered up a self-assessment that gives expression to the feelings of many other Catholics rocked by the revelations of the past year. "I'm different," he said. "You know the talk I gave today I would not have given 18 months ago."

In those 18 months, of course, the jarring news that former Cardinal Theodore McCarrick, a long-time Carr friend whose early support had stamped a kind of imprimatur on the initiative, had not only engaged inappropriately with seminarians, as had been rumored for years, but also had been credibly accused of sexually abusing children.

The news about McCarrick, said Carr in a subsequent interview, "was crushing." That was the same assessment given by Dr. Kimberely Smolik, CEO of the Roundtable, during a Feb. 5 interview about the conference.

McCarrick, for many in Catholic leadership roles, was the official face of the church that walked seamlessly amid levels of the church, including its loftiest quarters, and amid levels of secular power and influence. He raised enormous sums of money for a variety of Catholic activities, was a Catholic ambassador to the world, an international presence who seemed to be everywhere. He was also someone, as cardinal and former archbishop of Washington, whose endorsement lent unimpeachable credibility to any endeavor.

"I think the McCarrick revelation — if it had stood alone — would not have been as powerful as it is now in people's imagination," said Smolik. "However, that, with the grand jury report on the heels of it in a short amount of time, amplified the leadership coverup and failure."

The McCarrick revelation, she said, was especially hard hitting "because of the position and respect he had. So many of us knew him well, respected his humanitarian efforts on behalf of the church on a global scale. And the disconnect between the work we believe in and the report and what came out … made people want to dig deeper and find out what was going on with this culture of coverup," she said. "That leads to a lack of trust, and when trust erodes, you wonder what does that mean for everything else?"

While the most recent revelations contain little that is new or significantly different from the reporting that has gone on about the crisis for more than 34 years, the difference between today and past waves of revelations seems to be an increasing awareness that the crisis is not only about abused children but also about the failure of leadership and the covering up of the crimes committed.

The Leadership Round Table recognizes, said Smolik during the news conference, "That we are facing a twin crisis of abuse and a crisis of leadership failures." Of the latter, she said, "the church needs to create a new culture of leadership and management that values collaboration between clergy and laity, promotes transparency and competency, accountability, justice and trust."

That element of clergy culture and how it is an underlying cause of the scandal was largely missing from conversations of the bishops and experts during the first phases of the crisis — when it was initially uncovered in the summer of 1985 and reported in the pages of NCR and when it exploded anew as a result of the Boston Globe's exhaustive series on abuse by priests and coverup by cardinal archbishops in that archdiocese.

"One thing I took away from the two days is a recognition from the group that the two crises are interrelated," said retired Lt. Gen. James Dubik, a member of the Roundtable board. Recovery from the sexual abuse crisis, he said during the news conference, would require further work on how to do investigations and on proper prevention procedures.

"The patience of the people of God is exhausted with the episcopal and clerical culture that puts itself first." — John Carr

The question of "why did we get here?" underlies the second crisis. The scandal, said Dubik, "did not arise from nowhere, so let's look deeper into the root causes and then once we understand all of them, start with long term reform: management practices, leadership practices and improved collaboration practices."

Bishop Shawn McKnight of the Diocese of Jefferson City, Missouri, who has spoken forcefully on the need for reform and a greater role for laity in confronting the abuse crisis, raised the culture specter, saying, "What was repeated over and over again was an awareness of the need for both the cultural mindset conversion as well as specific norms and processes. We need to commit to having a study, foundational research, to understand the root causes of the problem we're in."

During the two-day event at Georgetown, each table included someone designated as scribe who used a computer connected to a central location to record the comments and suggestions from each of the groups.

Three topic areas were discussed during the proceedings:

The information gathered from the three sessions will form the basis of a list of recommendations that will be distributed, along with three "narrative" documents, to all bishops, leaders of religious communities and the public at large later this month, just ahead of the Feb. 21 meeting in Rome of the heads of episcopal conferences from around the globe.

What remains unknown is what the meeting in Rome will produce and whether attitudes have changed enough within the clerical culture to enact widespread reform. Pope Francis in recent comments attempted to lower expectations of what might result from the Rome gathering.

"It's worth pointing out two things about the Rome meeting," said Carr in the interview. "One, it should have happened a long time ago. And it's a miracle that it's happening. It's never happened before."

Never on the extreme of any of the hot-button issues, Carr self-describes as part of the "middle," his term for the group he also calls "the heart and soul the church." And he and the rest of the middle, he said, have lost their patience.

It's taken Carr a long time to reach that point. The founder of the Georgetown initiative, he has worked for bishops most of his life as former director of the Department of Justice, Peace and Human Development at the United States Conference of Catholic Bishops and before that as secretary for social concerns for the Archdiocese of Washington. He has spent endless hours lobbying on Capitol Hill for church interests, and he was deep in the trenches at the bishops' conference devising and defending programs that, in the end, aided millions of poor and disenfranchised.

In September, Carr made the first public disclosure of having been sexually harassed and abused as a high school seminarian during a wrenching panel discussion organized by the institute on the subject of the church's self-made "catastrophe." Asked what made him finally disclose that episode, he said: "I want to be clear. I was not raped. I did not experience the horrors described in the Pennsylvania Grand Jury report. I was harassed, I was groomed, I was touched."

His decision to go public was prompted by the conversations he had had with journalists and others throughout the course of the scandal. "I heard myself saying that silence and secrecy were at the core of the problem. And then I realized I had been silent and I had my own secrets."

He prefers to be considered a survivor rather than victim. But most of all, he said, "I am a believer."

His loss of patience, he said, is partly personal, partly stems from "hearing from priests who feel they are bearing the burden for the failure of their leaders." A third element of the exhaustion is the realization that the voice of the church "which needs to be heard on undocumented people, the unborn, the poor, has been compromised, and that's a terrible cost."

What would he tell a member of that exhausted middle who is ready to leave altogether?

He would say that none of us has done enough to confront the problem. He would put "the Gospel and the sacraments" first in his consideration to stay.

"Secondly, we have a message the world needs more than ever. If people give up and leave, it reduces the chance for renewal and reform. It's going to take all of us, so I encourage people to hang in there for the good of their souls, but also for the good of the church."

A version of this story appeared in the Feb 22-March 7, 2019 print issue under the headline: For Catholics in the church’s 'middle,' patience has run out.