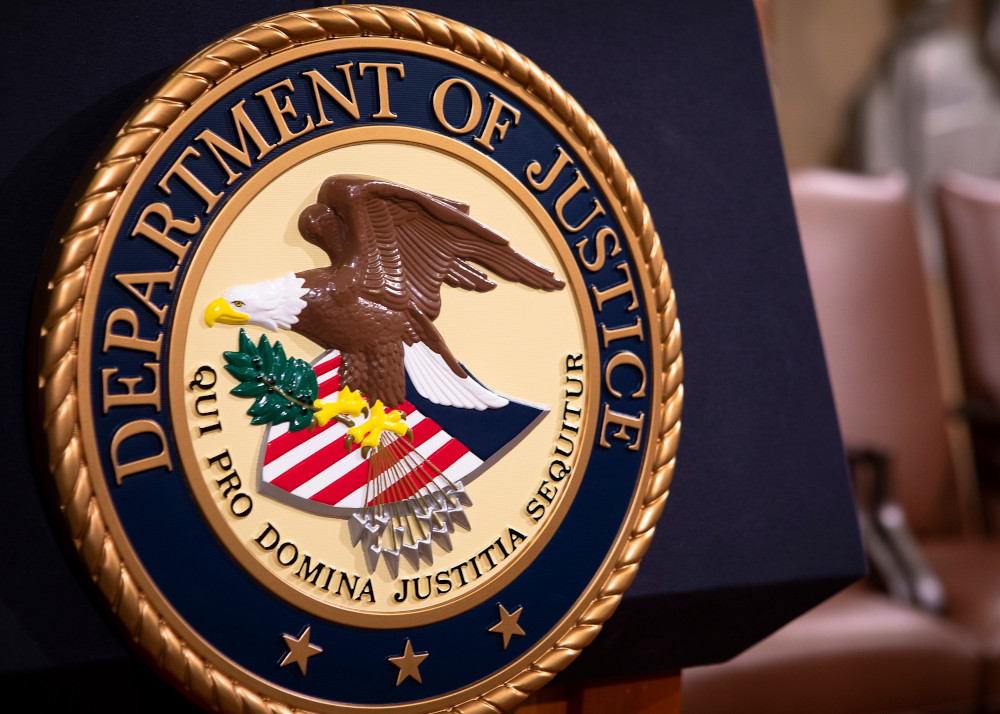 The Department of Justice seal is seen in the Great Hall at the Main Justice Building in Washington in this file photo. Lezmond Mitchell, a member of the Navajo Nation, is scheduled to be executed Aug. 26, 2020, for crimes committed on a reservation. (CNS photo/Tyler Orsburn)

Editor's Note: This story has been updated to reflect the reaction after Lezmond Mitchell's execution on Aug. 26.

Catholic leaders joined their voices with members of the Navajo Nation in opposition to the Aug. 26 execution of Lezmond Mitchell, the only Native American on federal death row.

"As Catholics, we stand with our Native American brothers and sisters in mourning this unnecessary loss of life and attack on human dignity," said Krisanne Vaillancourt Murphy, executive director of Catholic Mobilizing Network.

Prior to his execution, she said this action, at the hands of the U.S. government, "violates the Navajo Nation's cultural values, serves as a manifestation of the racial oppression inflicted upon Native Americans for centuries in the United States and devalues the sacred dignity of human life."

Catholic Mobilizing Network organized a virtual prayer vigil the afternoon of Aug. 26 where hundreds prayed for Mitchell, his victims, their loved ones, and all those impacted by his execution.

A family member of the victims participated in the vigil, which was led in part by Bishop James S. Wall of Gallup, New Mexico, the diocese where Mitchell's crime was committed. Wall is the chairman of Office of Native American Affairs for the U.S. Conference of Catholic Bishops.

Vaillancourt Murphy, in an Aug. 24 column in America magazine, stressed that the Catholic tradition is not alone in opposing the death penalty, noting that "the Navajo culture, too, professes the sanctity of life, a teaching which undergirds the opposition of the Navajo Nation and many other tribes to the practice of capital punishment."

She said the Catholic Church and the Navajo Nation stand together in opposing this execution, saying that the very act, "like the racism which brought his death sentence to pass, erodes the sanctity of human life."

Sr. Helen Prejean, a Sister of St. Joseph of Medaille and longtime anti-death penalty activist, tweeted in late July that Mitchell's planned execution was "another shameful chapter in our country's terrible treatment of Native Americans and constant disrespect for tribal sovereignty."

For years, the Navajo Nation has pleaded with the federal government to spare Mitchell's life, and recently these leaders have written to President Donald Trump asking him to spare the life of the 38-year-old scheduled to die by lethal injection at the Federal Correctional Complex in Terre Haute, Indiana.

Last year, the Justice Department announced it was resuming federal executions that had been put on hold for the past 17 years. Executions began taking place at the Indiana prison this past July.

Mitchell's attorneys had appealed to the U.S. Supreme Court asking them to consider his claim that he should be able to interview the jurors who convicted him in 2003 about a possible racial bias in their deliberations.

Mitchell was convicted for the 2001 carjacking and stabbing deaths of a Navajo woman and her 9-year-old granddaughter.

He was tried in federal court for crimes that occurred on tribal land and was convicted of robbery, firearm violations, carjacking resulting in death, murder and kidnapping. He was 20 at the time and acted alongside a teenager who did not receive the same sentence.

In 1994, the Federal Death Penalty Act gave tribal governments a say about their citizens receiving the death penalty, but the legislation has exceptions. In this case, the federal government did not need the Navajo Nation's permission to pursue the death penalty because the charge of "carjacking resulting in death" is considered to have "nationwide applicability" and can be charged as federal crime no matter where it takes place.

Vaillancourt Murphy noted that the Navajo Nation opposes Mitchell's execution and that the "federal government has used a legal loophole to pursue his death sentence ... sidestepping the Navajo Nation's aversion to the use of capital punishment."

Prejean described this as "federal overreach," noting the crime happened in Navajo Nation where there is no death penalty.

In a Twitter thread, she pointed out that at the time of Mitchell's trial, "the Navajo Department of Justice asked federal prosecutors not to seek the death penalty because capital punishment violates tribal custom and culture. The federal Department of Justice ignored the request. There was only one Native American juror."

One of the letters sent to Trump by Navajo Nation leaders and advocates asking him to commute Mitchell's sentence stressed the sacredness of life and the need for restoration and healing.

A letter written by Seth Damon, Speaker of the Navajo Nation Council, said: "Our justice system is based on life — iiná — that is sacred and must be protected. We therefore condemn murder and abhor the crimes committed in this case."

But he added that the belief system of the Navajo Nation "requires us to seek harmony and restore not only the victim, but also to restore the broken relations between families and communities so we all may heal."

Mitchell's execution is the fourth federal execution to take place since the Trump Administration resumed capital punishment for federal death-row inmates. Three men were executed in July and another execution, of Keith Dwayne Nelson, is scheduled to take place Aug. 28. Two more are scheduled for September.

In a statement about the most recent execution and ones coming up, two U.S. archbishops released a statement Aug. 27 saying: "The church's opposition to the death penalty is clear, and we have made many requests that the federal government should not resume these executions."