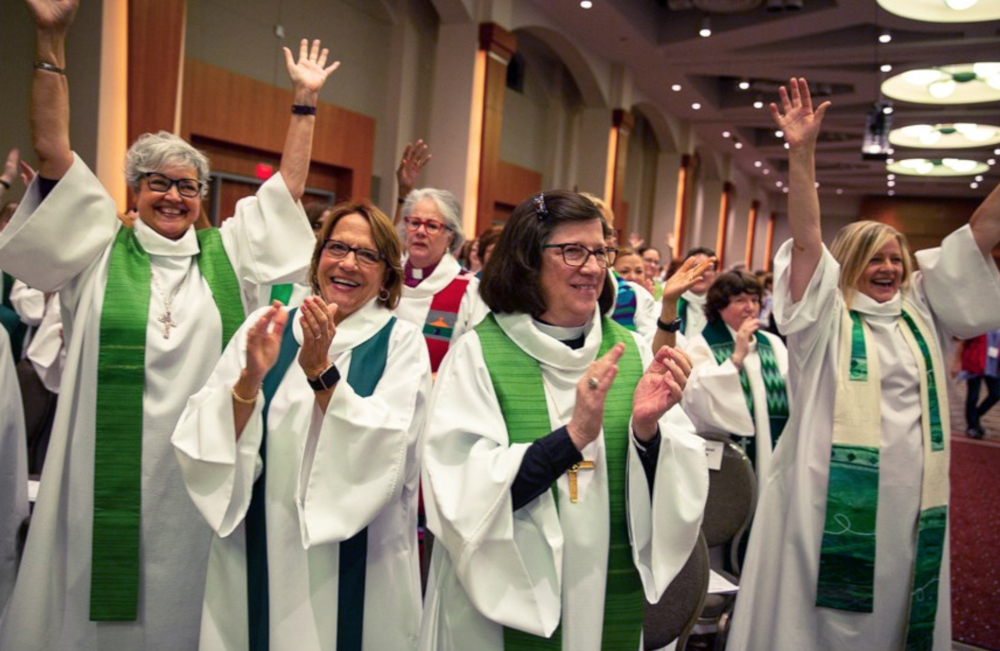 As they entered the worship service on the last full day of the Evangelical Lutheran Church in America’s Churchwide Assembly, some of the pastors clapped along with the upbeat music.

Others draped their arms around each other’s shoulders as they filed into the worship service, two by two. All were women, ranging in age from their mid-20s to the 104-year-old Rev. Maria de Jesús.

The processional was the kickoff of a year of celebrations leading up to the 50th anniversary of Lutheran women’s ordination in the U.S. in 2020, Presiding Bishop Elizabeth Eaton said in her opening remarks at the assembly.

Along the way, Lutherans will mark 40 years of women of color being ordained and 10 years of LGBTQ people serving freely in the mainline Lutheran denomination, one of the largest Protestant denominations in the U.S.

"This is not just a celebration for women, or women of color or for the LGBTQIA+ community," said Eaton, the first woman elected presiding bishop of the Evangelical Lutheran Church in America.

"These are decisions of this whole church, and this is a celebration for the whole church. This church has been blessed by the ministry of those formerly excluded."

Here are the stories of several ordained women serving the Lutheran Church today.

The first time The Rev. Jessica Crist encountered sexism in the church, she was a preteen in confirmation class.

The pastor teaching the class asked students to raise their hands if they were interested in pursuing ministry in any of the following professions: secretary, educator, missionary, musician.

When he reached "pastor," Crist’s hand shot up.

The pastor told Crist she couldn’t be a pastor.  The Lutheran Church didn’t ordain women.

"So immediately I decided that was what I did want to do," Crist later recounted. 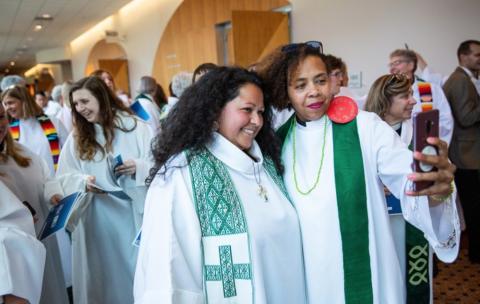 Nearly a decade later, Crist was ordained, too.

She remembers being one of three ordained women in her synod. People often remarked to them that they were "so nice" — the implication being the women before them had not been, she said.

"I would smile nicely and say, ‘And, you know, we can be nice because our predecessors broke down the doors so that we could walk through.’ They were bruised, breaking down those doors, and it’s not that we’re not bruised, but it’s a lot easier for us to walk through," she said.

Crist, 66, now chairs the Evangelical Lutheran Church’s celebration of the 50th anniversary of women’s ordination, which includes Bible studies and other resources for congregations to use.

Crist said she hopes Lutherans will remember their history and not take for granted the fact that women now serve at every level in the Evangelical Lutheran Church. That’s not the case for Lutheran women in some parts of the world.

Despite five decades of ministry, ordained women still face challenges in the Evangelical Lutheran Church. A 2015 surveyshowed a 9% gap between the compensation female clergy receive and what their male counterparts make in the denomination. And clergywomen are less likely to serve as bishops, senior pastors, and college, university or seminary professors.

But, Crist said, "We pioneers have broken down a lot of doors. I think sometimes younger, newer folks don’t realize what their foremothers did." 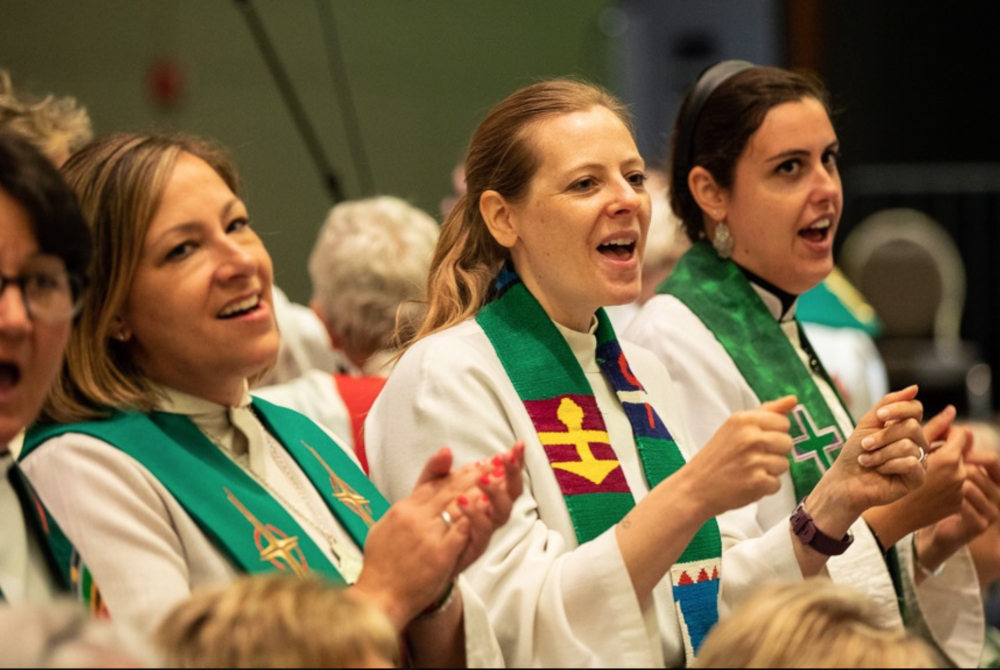 Female clergy participate in a service celebrating 50 years of women’s ordination during the Churchwide Assembly on Aug. 9, 2019, in Milwaukee, Wisc. (RNS/Courtesy of Evangelical Lutheran Church in America).

Growing up in Tennessee in a Baptist denomination that did not ordain women, the Rev. Wyvetta Bullock, 68, saw women in the church who were Sunday School teachers. She saw women who were missionaries.

But she never saw a woman who was a pastor, like her father.

And while she felt a call to ministry as a young adult, her father had mentored her brother to become a pastor.

After Bullock married and moved to Philadelphia — the headquarters of what was then the Lutheran Church in America — she decided to pursue that call.

Still, she had her doubts. 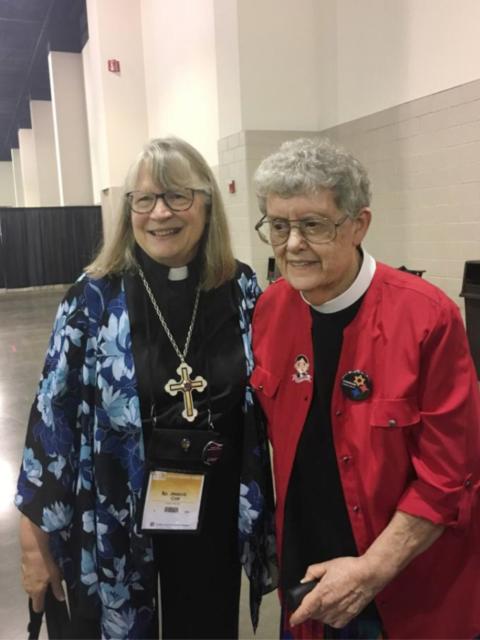 The denomination was — and remains — one of the whitest denominations in the United States. Numbers reported at the Churchwide Assembly put its membership at 94% white.

It took nine years after Platz’s ordination for a woman of color to be ordained in the Lutheran Church — the Rev. Earlean Miller.

"I knew that as a black woman that there would be challenges for me in this church. It felt like I would be sand in the shoe," Bullock said.

"But when all was said and done, I knew I could choose not to, but I really felt in my heart if I chose not to become part of the Lutheran Church, I would move myself off the path that God was taking me down at that time."

Her ministry has indeed been "challenging" at times, she said.

Still, she said, Lutherans continue to take steps to address racism, like the apology made in the "Declaration of the ELCA to People of African Descent" during this year’s Churchwide Assembly.

"It seems like the Spirit won’t let us go. When we come together, it’s like we say once again, ‘This is who we want to be. This is who we believe God calls us to be.’ And that helps me on those days when I think I’m going to go sell shoes," Bullock said.

"It helps because I believe that God is afoot, and she is moving and doing things in this church that are bigger than me, that are beyond me and that I may not live to see the results of, but because I trust that God is faithful, I’ll come back another day." 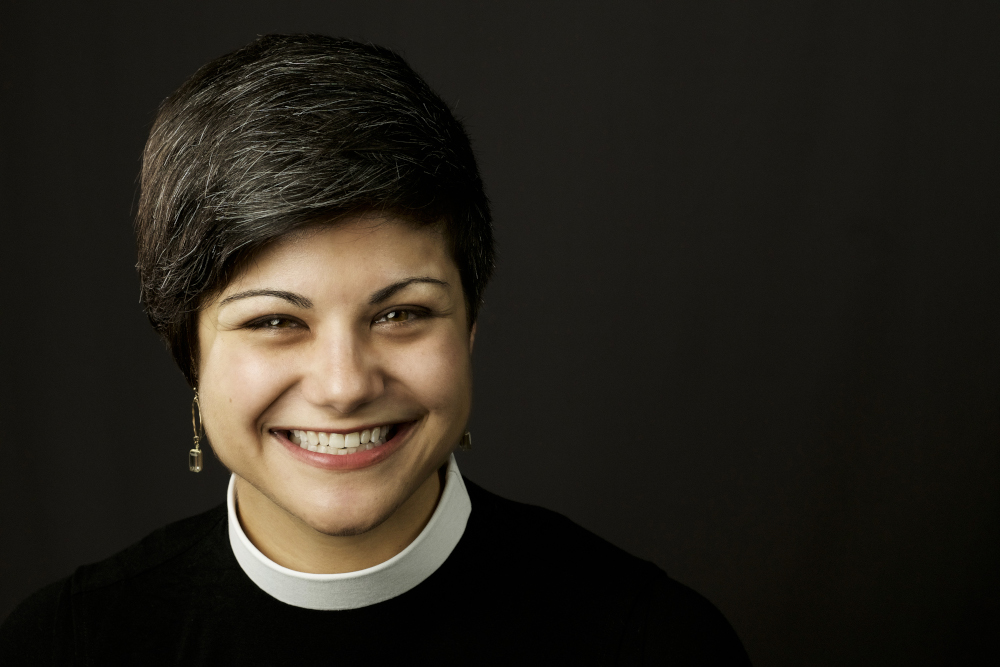 Growing up in the Episcopal Church, the Rev. Emmy Kegler, 34, felt a call to the pulpit and to serve communion that was so strong it felt like a "hook the size of a construction crane had settled in my chest and just started pulling me towards them."

That sense of call followed her to the Evangelical Lutheran Church in America.

She was drawn to the denomination by the joyful worship she had attended in the campus congregation at St. Olaf College in Minnesota, a passion for Scripture and a theology that "understands how Scripture interacts with the world and how it’s formed within context."

Kegler, who is gay, thought she’d found everything she was looking for in the denomination.

But the Lutheran Church still was wrestling with whether to ordain clergy who were openly in same-sex relationships, and she put her call on hold.

"When we came up against the discussions around sexuality, I, for a while, felt like I might actually not have found a church that can do this. I might have to once again leave, or I’m going to have to sacrifice my passion for Scripture or my sexual self," she said.

Things changed in 2009, when a contentious Churchwide Assembly approved a social statement titled "Human Sexuality: Gift and Trust." That statement allowed for differing viewpoints on sexuality in the church and opened the doors for clergy in same-sex relationships to be ordained.

Not long afterward, Kegler was ordained.

The social statement led some churches to leave the denomination, and, she said, "that will always be a mournful and sad thing."

"And yet it means that I don’t have to keep fighting at every turn for my legitimacy in the pulpit," she said.

Kegler — who is pastor of Grace Lutheran Church and co-leader of Queer Grace (both in Minneapolis), which organizes worship and activities for LGBTQ Christians and their allies — knows not all churches in the church are willing to call openly partnered lesbian, gay or bisexual clergy to serve as pastors.

And there hasn’t yet been a denomination-wide conversation to help Lutherans better understand transgender and nonbinary people in the church. That work now is being done at the grassroots level, said Kegler, who also founded an encyclopedia of the intersections of LGBTQ life & Christian faith.

"I think we narrow our view of God so strictly and sadly if we reduce the image of God and who can speak pastorally or prophetically or publicly to only white men, and the kind of liberation that is brought with acknowledging that people of all genders have the capacity to proclaim the good news of God is deeply healing for everyone within the church," she said.

"Because it reminds us that our preset societal gender roles don’t actually have bearing on who we are in the kingdom, which means freedom for men, women and everyone across the spectrum."