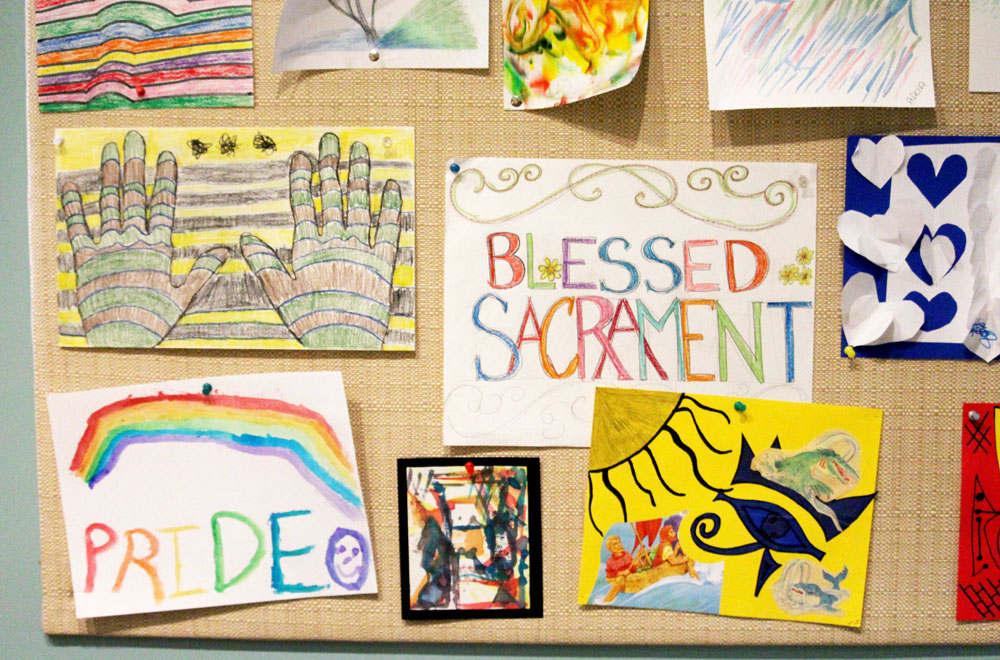 The Center at Blessed Sacrament hangs up works of art made by people who come to The Center for its services. One of the classes it offers focuses on making art. (Heather Adams)

With dreams of a better life, Gennaro Simeone moved in 2007 from Massachusetts to Hollywood, California. But within two months, Simeone found himself homeless and unsure what to do next.

As he has a cup of coffee at the very place that helped him turn his life around, The Center at Blessed Sacrament, he's able to reflect on all the changes over the past 10 years. He has a job, he's going to school to be a film director and he's gained two homes — his apartment and The Center.

"Some choices that I thought were good, they were not," Simeone said. "I was in a bit of a pickle. I came over here and got some resources. They showed me how to pull myself up with my own bootstraps."

Simeone hasn't needed The Center's housing services in years, but he keeps coming back for coffee, the friendships and to be an example to others needing help. 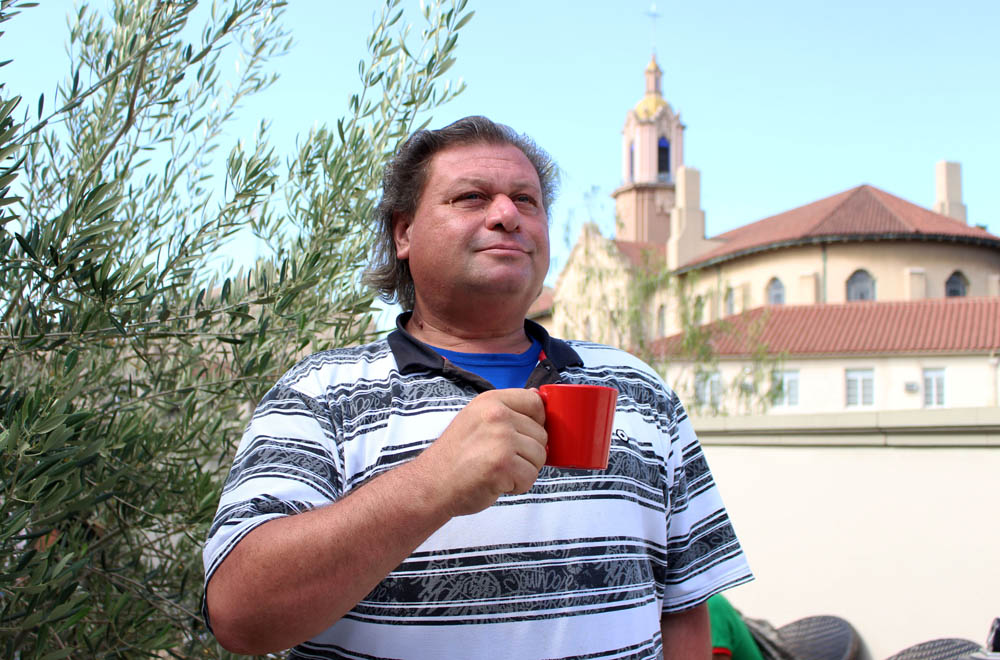 The Center at Blessed Sacrament helped Gennaro Simeone find housing after he become homeless back in 2007. He continues to come to The Center to meet with friends and drink coffee. (Heather Adams)

The Center at Blessed Sacrament is a nonprofit dedicated to ending isolation and homelessness in Hollywood. It offers programs such as coffee hour, art classes and mindfulness meditations alongside helping people secure housing.

"What we really try to do is create a space where people feel safe," said Nathan Sheets, executive director at The Center at Blessed Sacrament. "From there, a lot can happen."

Getting into housing isn't as simple as filling out a form. The Los Angeles Homeless Services Authority's Coordinated Entry System, a housing assessment, is extremely personal and challenging to navigate, Sheets said. Plus, he said, it often doesn't lead people to housing like they think it will, which is why it's only one part of what The Center does for people.

"We try to paint a realistic picture for people," he said. "The reality is there are so many folks experiencing homelessness and so few subsidies and even less housing available for people."

The questions on the entry system include every aspect of a person's life, like if the person has ever had sex for money, if they owe a bookie or dealer money, and about mental illness — questions someone wouldn't openly discuss with a stranger.

"Do you have planned activities, other than just surviving, that make you feel happy and fulfilled?" the Coordinated Entry System asks.

Those at The Center saw those questions and realized that asking people to reveal the worst parts about themselves to complete strangers wasn't going to work. Plus, Sheets said, he doesn't know anyone experiencing homelessness who hasn't also experienced trauma.

"People who have incurred significant trauma have built up defense mechanisms," Sheets said. "It takes a long time once you're in such defense mode to feel safe again."

So, they start with a cup of coffee and a conversation.

"The coffee legitimately is good," Sheets said, adding it's provided by Lamill Coffee, an upscale café in Los Angeles. "For a lot of people, it's the first step."

But it doesn't work to just focus on those experiencing homelessness; it's also about reaching out and working in the entire Los Angeles community, said Yolanda Brown, parish life director at Blessed Sacrament and board member of The Center.

Blessed Sacrament Catholic Church, a Jesuit parish, came together with 18 other Jesuit institutions in Los Angeles and Orange County to help raise awareness and influence legislation about homelessness.

The Center's approach to homelessness addresses isolation through a wellness model, using evidence-based practices such as mindfulness and trauma-informed treatment. Also, rather than pushing people into what staffers think is best for them, staffers turn it around, asking those experiencing homelessness what they want and to be participants in this journey rather than clients. 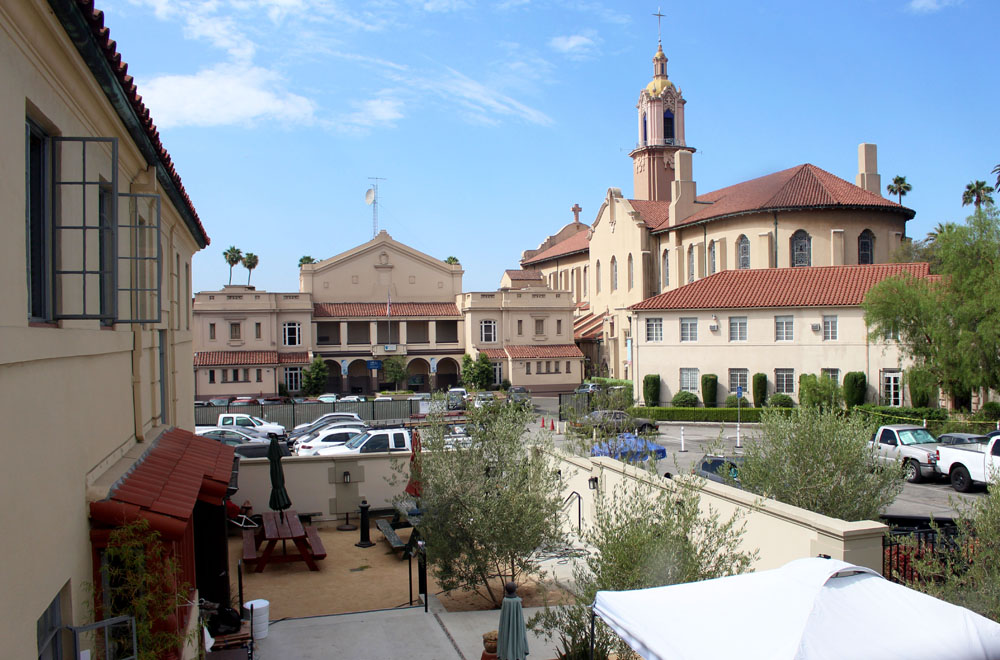 "Being broke is more than just economics or financial," Brown said. "When the spirit is broken, it really does not enable one to move forward."

The Center offers a wide range of services. Sometimes people just need a place to get their mail, a place to go to the bathroom, help in filling out the Coordinated Entry System, or just a cup of coffee.

"We have people who come here for months and months and all they do is come in to get cups of coffee," Sheets said. "And that's totally fine."

Henry Lenhert is currently homeless; he comes to The Center at Blessed Sacrament to work on his art, drink coffee and talk with friends.

"I don't need to have money to live, to be happy," Lenhert said.

It's his art that makes him feel alive. And he writes from his heart, he said.

"Broken promises and empty dream that might have come true. I had a lot of plans to spend the rest of my life with you," reads one poem about divorce.

The divorce in the poem, he said, left him in a lot of debt, contributing to his homelessness.

He said homelessness is hard because people pass you by without noticing you. He's optimistic, though. He said he will continue putting his artwork out there, hoping someone will enjoy it.

"You walk down the street and nobody knows you exist, nobody cares," Lenhert said. "Unless you actually put the word out and say, 'I am he.' "

Jesuit Fr. Frank Buckley, clinical director at The Center at Blessed Sacrament, knows feeling invisible can be extremely isolating for those who walk through The Center's doors. He starts each of his classes by going around the room and asking each person to say what is the most beautiful word in the English language: their name.

"We are in heart of Hollywood," said Brown. "We worship, educate, serve and celebrate."

She said The Center and its building have had a long history with Blessed Sacrament. Although The Center operates separately from the church, they haven't considered moving it off campus, because serving everyone is what they do.

"When you look at the pews of the church, it's not only the affluent that live in the Hollywood Hills, but it's also those that sleep on the boulevard," Brown said. "We're all as one."

She said The Center is even incorporated in the school. Beyond having programs like sock drives or making cards for those at The Center, children at the school who are experiencing homelessness might be sitting next to children with celebrity parents.

"They recognize that we must love each other and there is that conversion of heart," she said.

It's that kind of love they also hope to teach the community.

The Center and Blessed Sacrament work with other religious organizations in the area, such as Temple Israel of Hollywood. Less than a mile away at First Presbyterian Church of Hollywood, there's a meal on Wednesdays that those at The Center are encouraged to go to after coffee hour.

Sheets said there's no excuse for people of faith to not reach out and do something about the homelessness crisis in Los Angeles and that working together with other faith groups has been an important part in tackling this issue.

"People are dying on our streets," Sheets said. "We [people of faith] really should be doing something about it."

Sheets said they can track the number of people they put into housing, but sometimes the true work they're doing isn't as simple to put down in a spreadsheet.

For Simeone, he's striving to move forward a little bit more every day, and hopes others can do the same.

This story appears in the The Field Hospital feature series. View the full series.
A version of this story appeared in the Sept 7-20, 2018 print issue under the headline: Help in the heart of Hollywood.