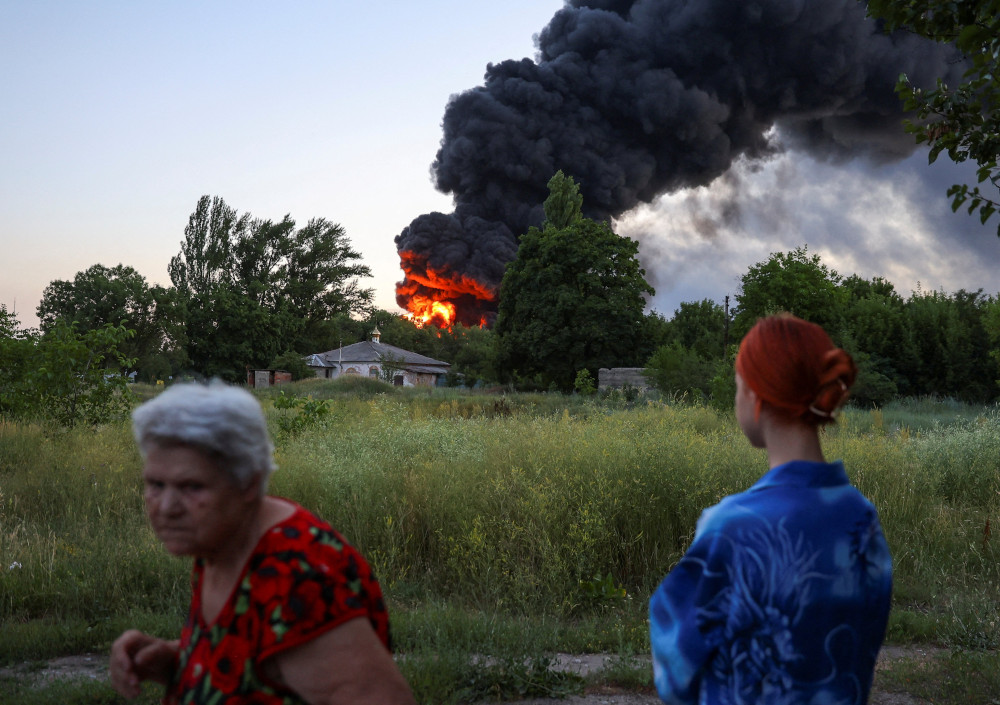 Next year will mark the 40th anniversary of the U.S. bishops' landmark pastoral letter "The Challenge of Peace: God's Promise and Our Response."

Then, the two "superpower" nations, the United States and the Soviet Union, held each other in check in the nuclear age as in a high-stakes chess match, with most nations, and the billions of the world's inhabitants, merely pawns.

Today there is no more Soviet Union, as its affiliated states reclaimed their independence in the 1990s. Nominally nonaligned Yugoslavia also broke up, cleaving old and new countries along far older religious and ethnic lines as if it were the Antarctic ice shelf in an age of climate change.

So what do we have now?

Serbia, one of the former Yugoslav territories, has been provoking Bosnia-Herzegovina militarily. Russia, which was the heart of the Soviet Union, has been fighting a war to control Ukraine since late February, with varying degrees of success and with threats to use nuclear weapons.

Would-be states wishing to secede from the nations to which they're shackled find the going tough either with (South Sudan) or without (Tigray) independence.

Retired Auxiliary Bishop Thomas Gumbleton of Detroit was on the five-bishop committee that developed "The Challenge of Peace."

So too was John O'Connor, at that time an auxiliary bishop for what was then called the Military Vicariate for the United States and the future cardinal-archbishop of New York. As a rear admiral, he had served as a Navy chaplain from 1952 to 1979, which included four years as chief of Navy chaplains.

Church-watchers wondered what kind of document would emerge from a committee with one of the nation's most hawkish bishops in O'Connor, and one of its most dovish in Gumbleton, once the bishop-president of Pax Christi USA.

"We were at opposite ends of the spectrum, there was no question," Gumbleton said in an Oct. 7 phone interview with Catholic News Service.

Still, "The Challenge of Peace" bridged so many gaps, Gumbleton said, that only nine bishops voted against approving the pastoral letter.

The one element of the pastoral that may have been the most difficult to harness was the use of nuclear weapons.

Decades of SALT (Strategic Arms Limitation Treaty) and START (Strategic Arms Reduction Treaty) talks showed how superpowers can compromise, but there still remained hundreds of nuclear weapons, the payloads of which could wipe out cities on a much larger scale than the atomic bombs deployed by the United States on Hiroshima and Nagasaki, Japan, in 1945 to hasten an end to World War II.

The pastoral settled on a strictly conditioned acceptance of nuclear deterrence, which would permit a country that had suffered a nuclear attack to launch one of its own.

"Almost right away, I joined others in urging a rejection of that strictly conditioned acceptance," said Marie Dennis, who 40 years ago was conducting parish-based education on peace and justice issues with the Center for New Creation in the Washington suburb of Arlington, Virginia.

Dennis now works with Pax Christi International as senior adviser to the secretary general. She's a former co-president of the organization and received Pax Christi USA's "Teacher of Peace" award this year. She has been in meetings over the past several years with high-ranking Vatican officials to see whether a papal document can be written calling for a rejection of all nuclear arms.

She took heart when Pope Francis, speaking at a 2014 conference in Austria, "began to signal that he was moving the church away from deterrence, even a strictly conditioned acceptance. I was delighted. I was surprised it wasn't mentioned (in the press) until later."

Susan Gunn, director of the Washington-based Maryknoll Office of Global Concerns, was a 12-year-old girl at St. Catherine Parish in Warwick, Rhode Island, nearing her confirmation at the time "The Challenge of Peace" was issued.

"It was a different world, but it was a time, in my memory, that people were really scared. We were scared about U.S.-Soviet relations and U.S. nuclear policy," Gunn told CNS. "And the bishops heard people's fear and responded. It was a wonderful pastoral moment of teaching of the faith."

Gunn's confirmation assignment -- part of taking adult responsibility for one's own faith formation -- was to read "The Challenge of Peace."

"It did wake me up to peace and social justice issues and the responsibility that we have as disciples of Jesus to carry on the message of love our neighbor," she said. "I felt proud to be a member of the Catholic Church and to care for the common good with its teachings."

Gunn said as of late she's been "distracted by the current urgency of nuclear weapons. I can't think of 'The Challenge of Peace' from 40 years ago and not feel the same fear."

"When the pastoral letter was written, no one could have foreseen that the cold war and the nuclear arms race would end without hardly a shot being fired. The world is a very different place today," said Gerard Powers, director of Catholic peacebuilding studies and coordinator of the Catholic Peacebuilding Network for the Kroc Institute for International Peace Studies at the University of Notre Dame.

"In 1983, a major issue was whether the bishops should support a nuclear freeze. Since the end of cold war, nuclear arsenals were not just frozen but were reduced substantially. But the world is now schizophrenic on nuclear weapons," Powers said in an email to CNS.

"On the one hand, the pope has said that even the possession of nuclear weapons is morally problematic, the nuclear ban treaty has now gone into effect, with the holy see the first country to ratify it; and former nuclear 'hawks' -- and many others -- have been working for much of the past three decades on global nuclear disarmament, which was dismissed as utopian and naive when the peace pastoral called for it in 1983.

"On the other hand, the risk of nuclear war is greater today than at any time since the Cuban Missile Crisis and the U.S. and other nuclear powers are in the midst of the largest nuclear 'modernization' since the Reagan administration's build up that the bishops' opposed in 1983," Powers said.

The so-called "doomsday clock" formulated by the Bulletin of the Atomic Scientists bears this out. The organization calculates it has been "100 seconds to midnight" since 2020. In 2018 and '19, it was at two minutes to midnight -- the closest it had been to midnight since 1953, when the U.S.-USSR cold war was at its most tense. It was at its furthest from midnight in 1993, after the USSR was dismantled and Ukraine voluntarily removed nuclear arms from its reclaimed soil.

"Given these negative developments, the bishops' careful ethical and policy analysis of nuclear deterrence, nuclear use, and the dynamics of the arms race remains relevant," Powers said.

Marie Dennis said one oft-overlooked document from the U.S. bishops is "The Harvest of Justice," issued in 1993, the 10th anniversary of "The Challenge of Peace."

"It was a pretty extraordinary document. I quote a lot from 'The Harvest of Justice.' It was building on 'The Challenge of Peace.' It wasn't a shift," she said. "Like all Catholic social teaching, it's always speaking to the context, to the reality of the world at that point, by 1992 or '93, the world was looking at new ways of managing conflict."

Gumbleton laments the neither the bishops nor the U.S. government actively worked toward nuclear disarmament following passage of "The Challenge of Peace."

"I'd like the bishops of the United States, the country that's leading the pack with nuclear weapons -- the most weapons, warheads -- to take a fresh look at the signs of the times, and offer new teaching," Maryknoll's Gunn said, "realizing that even the possession of nuclear weapons is a threat to life."