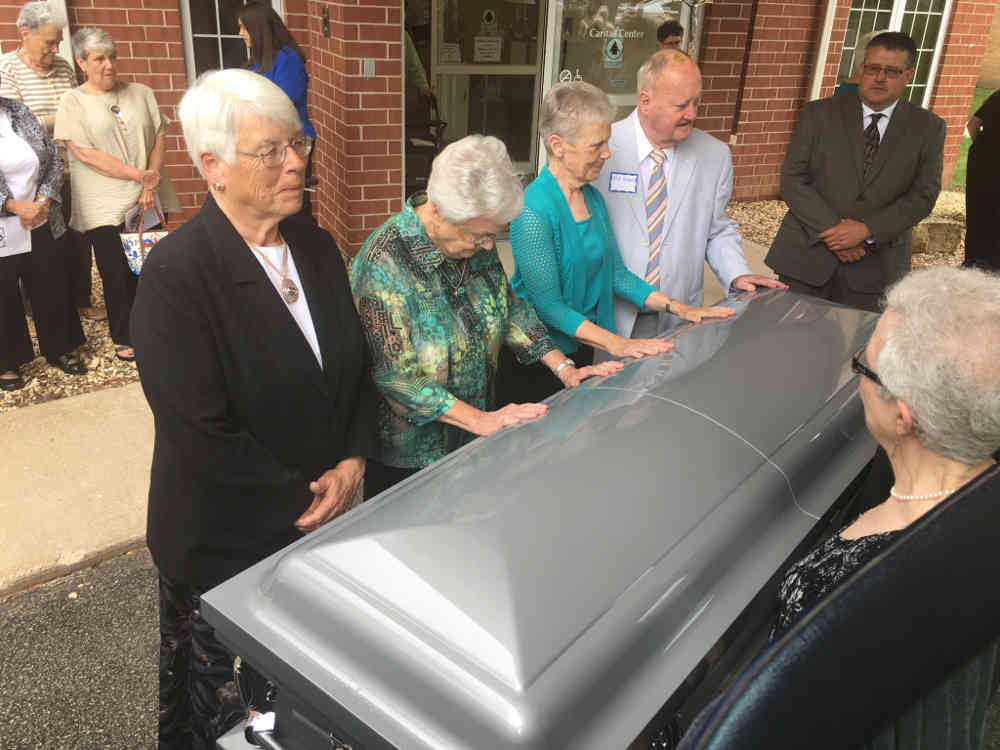 With a little help from her friends, under a cloudy sky and light warm drizzle, the body of Sister of Charity of the Blessed Virgin Mary Helen Maher Garvey departed her motherhouse for the last time Aug. 17 at 2:46 in the afternoon.

Outside the sprawling compound minutes after a Mass of Christian Burial in the motherhouse chapel, her community gathered to sing its heartfelt farewell, the song of "Virgin Mary of Mount Carmel." Tissues in hand, dabbing away tears, community members sang the words: "Grant us grace to climb Mount Carmel and to learn that love is loss. Guide us till our ways outdistance all earth's treasures save the cross."

At song's end, all living current and past presidents of Garvey's congregation — president Teri Hadro and past presidents Dolores Marie McHugh, Mary Ann Zollmann and Joellen McCarthy — gently pushed Garvey's grey casket into the back of a waiting hearse. Seconds later, the vehicle drove around a corner and out of sight on a short journey to Garvey's resting place at Mount Carmel cemetery overlooking the Mississippi River.

Garvey entered religious life in September 1952 and had been a member of the Mount Carmel BVM community for 65 years. She became a quintessential woman religious of the Second Vatican Council era, having professed her final vows three years before the council opened in 1963, then living out the council's changes through decades of faith and turmoil. Notably, many here said, she navigated those changes with tenacity, grace, wisdom and humor.

While the church underwent change, the faith that first drew Garvey to religious life — a faith she described in an article in Commonweal magazine — "of ongoing mystery, revelation, and love" — never seemed leave her. Indeed, sisters and family members remarked at the way she combined her sense of the sacred with appreciation for the mundane, love of God and service to humanity.

Recalling those early days of professed religious life nearly seven decades back, she wrote: "By the time I reached Mt. Carmel on the banks of the Mississippi in Dubuque, Iowa, I knew how homesickness felt. … We were mostly eighteen-year-olds, eager and unsophisticated, at times wacky, always looking for whatever news from the world might seep through the big wooden doors of the Motherhouse. Yet we understood, most of us, that we were called to a different life — a life of consecrated celibacy and one of ongoing mystery, revelation, and love."

Msgr. James Barta, chaplain at Mount Carmel, presided at the funeral Mass with Archbishop Michael Jackels of Dubuque in attendance. BVM Sr. Bernadette McManigal opened the service, offering words of welcome to those who had come from throughout the country. 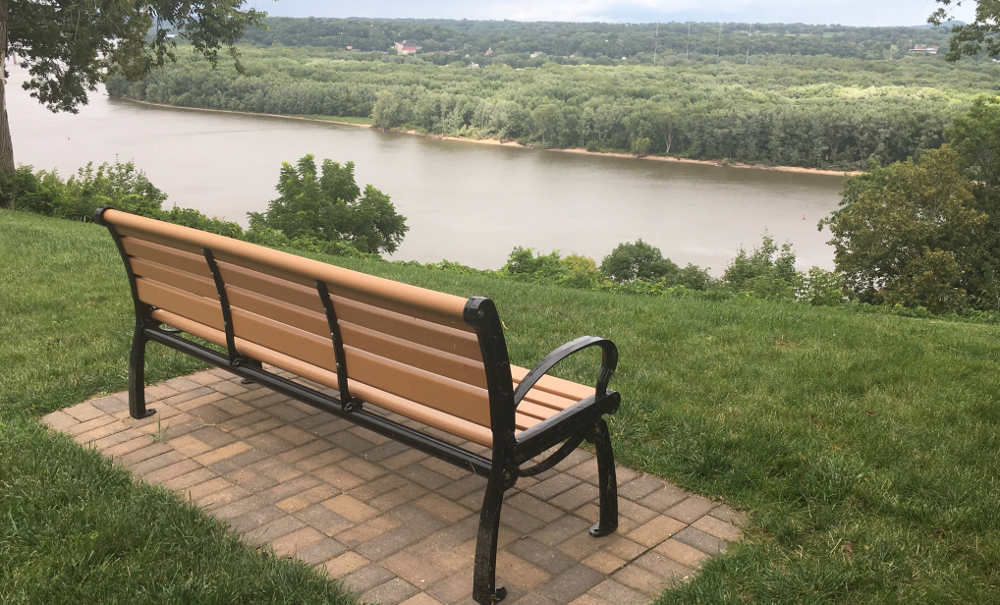 McManigal, recalling Garvey's years as a Sister of Charity of the Blessed Virgin Mary, said she used her gifts "to remind us of the beauty and goodness of religious life, as our way of being united with the Spirit." "Facing the challenges and opportunities of our time … she shared her wisdom and her love."

She spoke of Garvey's leadership qualities, Garvey having been elected to head her community as well as the presidency of the Leadership Conference of Women Religious. She recalled that as LCWR president Garvey once welcomed Pope John Paul II to the U.S., to his surprise with a bold kiss, "as sign of her love for the Church."

Garvey received the LCWR 2009 Outstanding Leadership Award, recalled McManigal. It read: "A woman who knows who she is, where she stands, and what she believes."

Hadro offered a reflection after the Mass readings, describing Garvey as a woman "of deep faith, abiding trust and, above all, boundless love. … And it is our experience of her love which will remain longest with us."

"With St. Paul, Helen believed with every fiber of her being that God, working in [her] would do infinitely more than [she] could ask or imagine. One of our community prayers, the prayer ascribed to our founder, Mary Frances Clarke, asks God to make her a 'fit instrument in your hands.' Helen lived that prayer daily. … [It] enabled Helen to say 'yes' to any number of things she'd never done before." 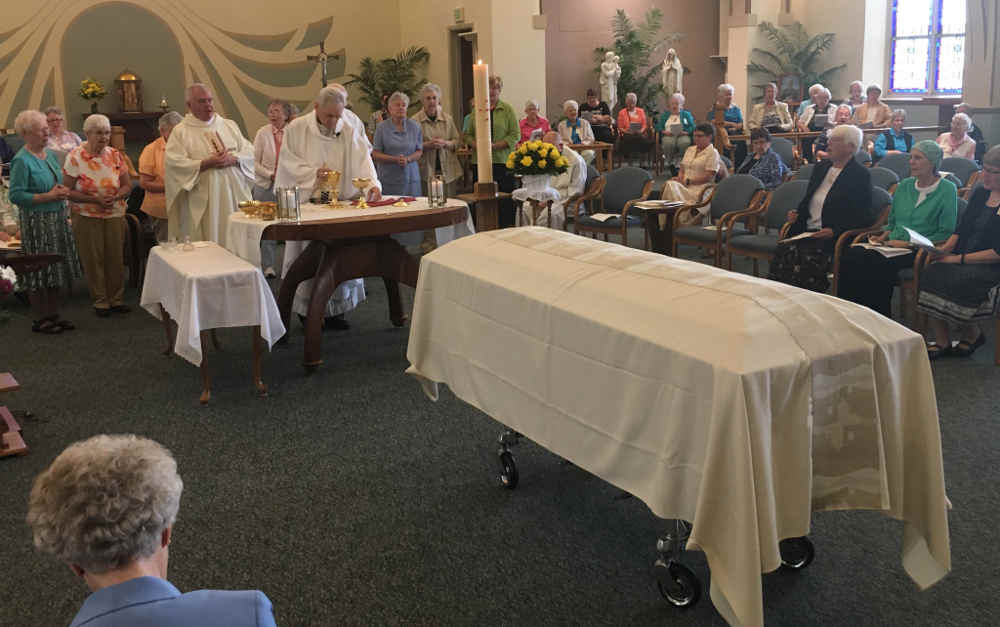 Time and again, those who recalled Garvey's life spoke of her gusto for life and her sharp and cutting humor. Hadro noted that one of Garvey's most important achievements was the leadership she showed putting together the "Women in Spirit" exhibition, a traveling exhibit which told the story of U.S. women religious from the founding days of the nation.

"According to Helen, raising the money for 'Women in Spirit' was easier than convincing congregational archivists to loan cherished historical artifacts for the traveling exhibit." She added: "Her belief in importance of the project and her powers of persuasion carried the day and gave her lots of stories to tell. Is there one among us who hasn't laughed until our sides hurt upon hearing Helen recount any number of tales?"

Said Hadro of Garvey: "Her memory was capacious, her recall instantaneous and her warm words always at the ready. Whether she was having a good day or a tough day, whether she was wrestling with an administrative challenge or planning her next public address, whether she met you in the hallway or by appointment, it was never about Helen. You had her complete attention." 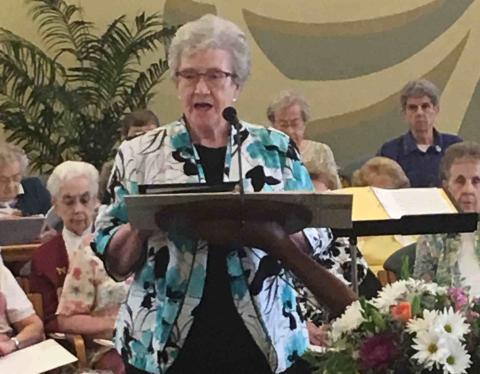 Opening the service, BVM Sr. Bernadette McManigal welcomes those who had come from throughout the country. (Thomas C. Fox)

Several people attending the day's services spoke of the difficulty they were still having processing Garvey's death. They said what made it so difficult was the vivaciousness she had brought to life. Members of her community said they had a bit more time to process the loss as they watched her health's decline in recent weeks. Outsiders, however, did not have this perspective, making the effort more difficult.

All community members who recalled Garvey said she was generous and caring to the end, not wanting a lot of fuss.

Only days before her death, speaking on the telephone with a good friend and fellow National Catholic Reporter board member, Annette Lomont, Garvey surprised Lomont, saying, "I'm going to God, and I'm taking you with me." Lomont reflected on those words for days until she received word of Garvey's passing.

In the end, the comment would not be surprising for Lomont or anyone else who knew Garvey well. They knew well that in Garvey's life — and transformation — was all about taking people to God.

[Tom Fox is former NCR editor and publisher and a current member of NCR's board of directors.]