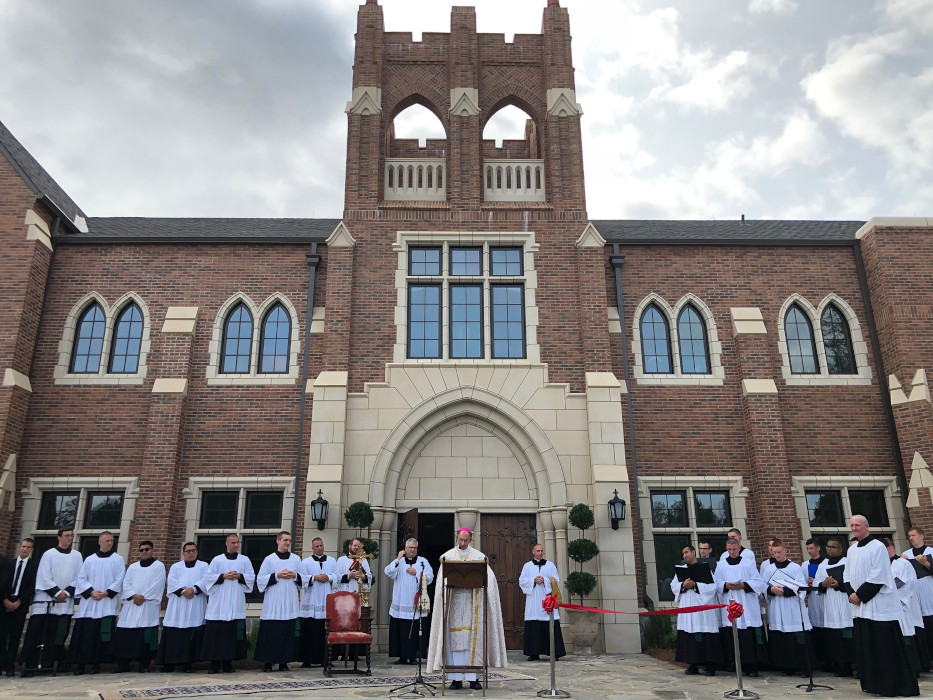 It was a day to thank God for sending more laborers to gather his harvest, Diocese of Charlotte leaders said as they blessed and formally opened St. Joseph College Seminary.

The newly completed college seminary was blessed by Charlotte Bishop Peter J. Jugis Sept. 15, the feast of Our Lady of Sorrows, after an official ribbon-cutting ceremony.

With its striking Gothic architecture and 30,000 square feet of living-and-learning space, the college seminary serves as home to young men who are exploring a vocation to the Catholic priesthood while also pursuing undergraduate degrees at nearby Belmont Abbey College.

St. Joseph is the only college seminary program between Washington and Miami and has been a magnet for young men wanting to discern the priesthood.

The program has proven so popular that construction on a permanent home for the seminary had to be accelerated. Enrollment has more than tripled since the program began in 2016, and upon its opening, the college seminary building is already at two-thirds of capacity with 27 out of 40 seminarian slots filled.

Private donors have already contributed more than $15.5 million toward the $20 million project.

Jugis and others at the Sept. 15 ceremony gave thanks to God for answering prayers to provide more vocations to the priesthood — more laborers for his harvest, as noted in chapter 9 of the Gospel of Matthew, which was read during the opening ceremony.

"We dare to ask the Master of the harvest to fill up St. Joseph College Seminary," the bishop said, then added with a grin, "We hear there are still a few vacant rooms available."

The bishop also acknowledged the intercessory prayers of Mary and of St. Joseph, patron of the college seminary.

"With all that has been done here with the guidance of Our Blessed Lord and the help of the Holy Spirit, let there be for us and into the future, many more blessings to come," the bishop said.

"Let us continue to pray for, and especially to encourage, vocations to the holy priesthood throughout the church, especially here in the Diocese of Charlotte," he added.

The success of the college seminary couldn't come at a better time. The Catholic population in western North Carolina has swelled to more than 400,000 — up 900% since the diocese was founded in 1972.

Noting the quality building materials and artisanal skills devoted to constructing the college seminary, Winslow added, "We're going to be here now and into the future" and "continue to reflect the Gospel to the larger community."

The opening ceremony was held exactly two years after ground was broken on the site for the college seminary. On Sept. 15, 2018, the bishop, seminarians and the college seminary's rector, Fr. Matthew Kauth, braved wind and rain from Tropical Storm Florence for the groundbreaking.

Two years onward, Kauth reminded those gathered of the purpose for the seminary: to form men to serve as holy priests for the growing Catholic Church in western North Carolina. The work of the church goes on, he said, despite storms, crises or pandemics. 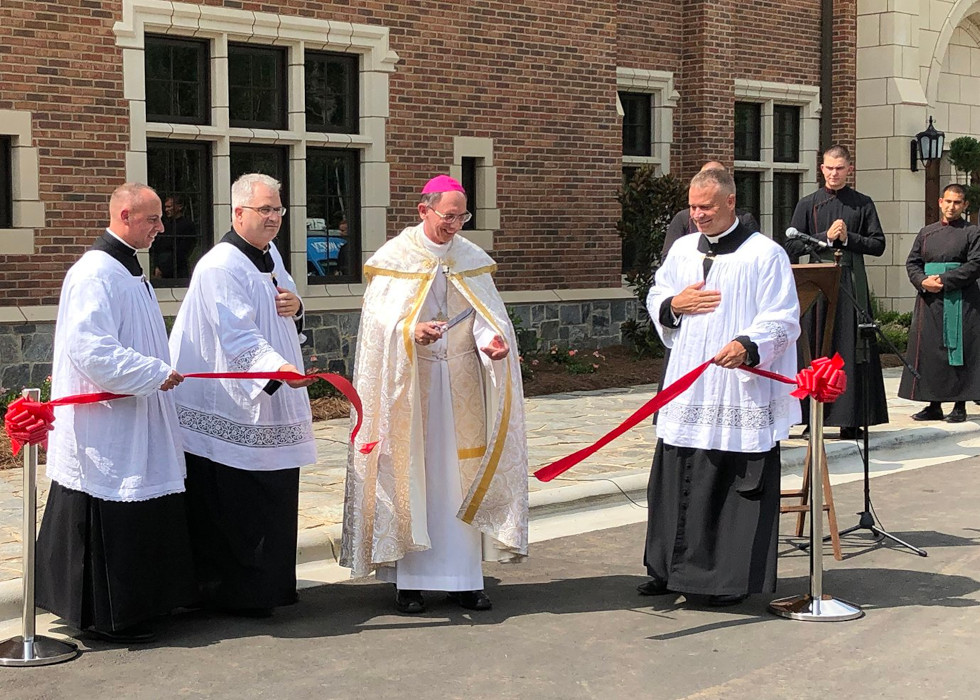 God has blessed this project, Kauth said. "He has put his finger down here and He has blessed us."

"What we are about here at St. Joseph College Seminary is building men — building men of nobility, of integrity and authenticity," he said. "The building, the structure — beautiful as it is — is attempting in its nobility and strength to be an image of that: a reminder of what we are supposed to become as men of virtue."

The aim of the college seminary is to nurture local vocations among the parishes and families in the Charlotte Diocese, close to home, before the men graduate and go on to a major seminary out of state to complete their priestly formation and return for ordination to serve in the diocese's growing parishes.

With Gothic architecture and brickwork inspired by nearby Belmont Abbey, where in 1876 Benedictine monks planted the roots of Catholicism in western North Carolina, the two-story college seminary includes 40 dorm rooms, a chapel, classroom and library, faculty offices, a refectory and kitchen, and a picturesque cloister walk where students can meditate and pray.

The building reflects a monastic-style design meant to foster prayer, quiet and reflection even as its communal spaces provide opportunities for the young men to bond as friends and brothers in Christ.

Architectural details including custom lion-tail door pulls, stained glass windows, brickwork and archways were all fashioned by local artisans, Kauth noted. Many of the furnishings and artwork were donated to the college seminary.

"I'm very happy to be here. I found peace here at the seminary," said Kolbe Murrey, a fourth-year student who's a member of St. John the Baptist Church in Tryon, North Carolina.

The college seminary enables him to take the time to "really listen to what God wants me to do with my life." he told the Catholic News Herald, Charlotte's diocesan newspaper.

It means "having a life of prayer and study and being with just a great bunch of other young men my age who want to discern a call to the priesthood," he said, and the experience has given him a broader perspective. "The church and God's work in the Church is bigger than just my vocation," he said.

As a joyful end to the opening ceremony, the college seminarians formed a line in front of the building to sing the seminary's Latin fight song, the hymn "Salve Pater," which salutes St. Joseph as the college’s patron.

Guilfoyle is editor and Howell is senior reporter at the Catholic News Herald, newspaper of the Diocese of Charlotte.