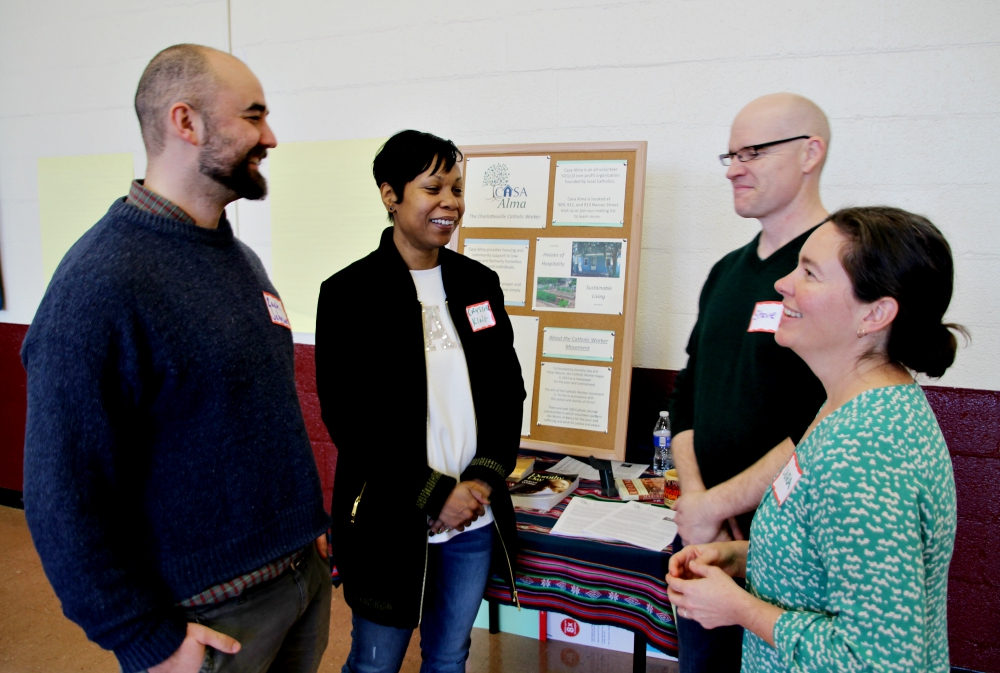 Organizers behind the Jan. 20 "Grappling With the Sin of Racism" workshop at the Church of the Incarnation in Charlottesville, Virginia, from left: Zachary Johnson, executive director of Call to Action; Crystal King, director of administration of Call to Action; and Steve and Laura Brown of Casa Alma, the Catholic Worker community in Charlottesville (James C. Webster)

Committed lay Catholics here, stung by the worldwide attention given their city by hundreds of white supremacists and armed neo-Nazis last August, are "grappling with the sin of racism" within the church and their community.

A daylong "exploration of racism and Catholicism" convened by the Casa Alma Catholic Worker community Jan. 20 drew nearly 100 to the Church of the Incarnation to pray, reflect and hear speakers challenge them to confront racism and white supremacy.

Following the Aug. 11-12, 2017, "Unite the Right" rally that left one person dead and 30 wounded, "a lot of people asked Casa Alma what was the Catholic Church response" to the overt demonstration of racism, said Catholic Worker leader Laura Brown.

Although many lay Catholics joined the counterprotest against the white nationalists, some have expressed concern about the absence of visible Catholic clergy on the front lines alongside several fully garbed Protestant, Jewish and Muslim leaders. "There were a lot of Catholics there, but no leadership," said a participant who asked not to be named.

"I suspect that you have a lot of good Catholics struggling in Charlottesville," said Greer Gordon, keynote speaker at the "Grappling With the Sin of Racism" event.

"If we are committed, some of us are going to have to be on the front lines," said Gordon, retired director of the Office of Evangelization in the Diocese of Baton Rouge, Louisiana. "All of us are called to rally together and witness to the value that we hold as church.

"But going out to demonstrate is not the hardest way" to combat white supremacy, she added. "The hardest way is sitting at that table, talking with your racist uncle."

Charlottesville has "a lot of cultural problems to sift through," she said. "In this university town, how do we as a church begin to encourage people to begin to understand that as the Catholic Church we do not accept the 'undignifying' of human beings?" 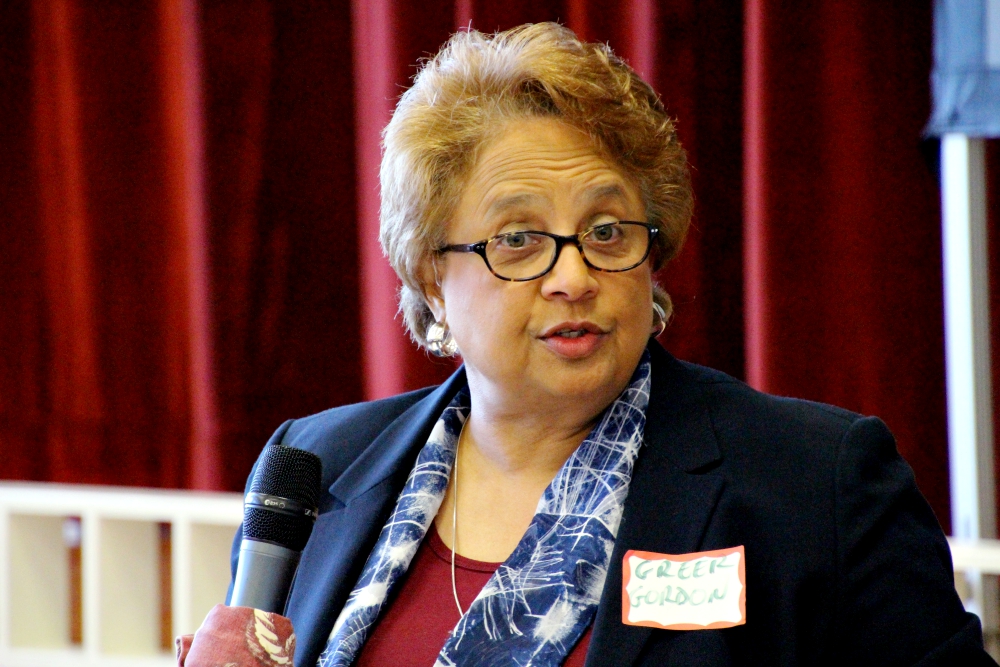 Greer Gordon, retired director of the Office of Evangelization at the Diocese of Baton Rouge, Louisiana, speaks to the "Grappling With the Sin of Racism" conference Jan. 20 in Charlottesville, Virginia. (James C. Webster)

Catholics "have to be able to stand in front of people and witness," Gordon insisted. It may require courage, she said, but "we need to say respectfully to some of our bishops that we need to go back and revisit the Gospel story."

"Like all those early Christians, we are called to do anything we can, including possibly be willing to put our lives on the line to witness to the truth of Jesus Christ — to take some stands that are going to challenge the powers that be."

Catholics are called to "open our hearts to how we understand white supremacy and racial justice," said Nichole Flores, an assistant professor of religious studies who teaches Catholic theology and ethics at the University of Virginia.

She described how a mostly black neighborhood in Charlottesville was affected when "homes were destroyed, people displaced and businesses closed in urban renewal led by whites." City data shows that the African-American population in that area dropped by more than 12 percent between 2000 and 2012.

The first step to cultivate racial justice is to listen to the people affected, Flores said. "It demands a spirit of humility and receptivity. Racial justice requires paying attention, not dismissing them as whining, rude or uncivil."

Describing Black Lives Matter and similar protests, she asked, "Do we have the heart to listen and the mind to listen rather than dismissing them as against police officers or against white people or against order?" 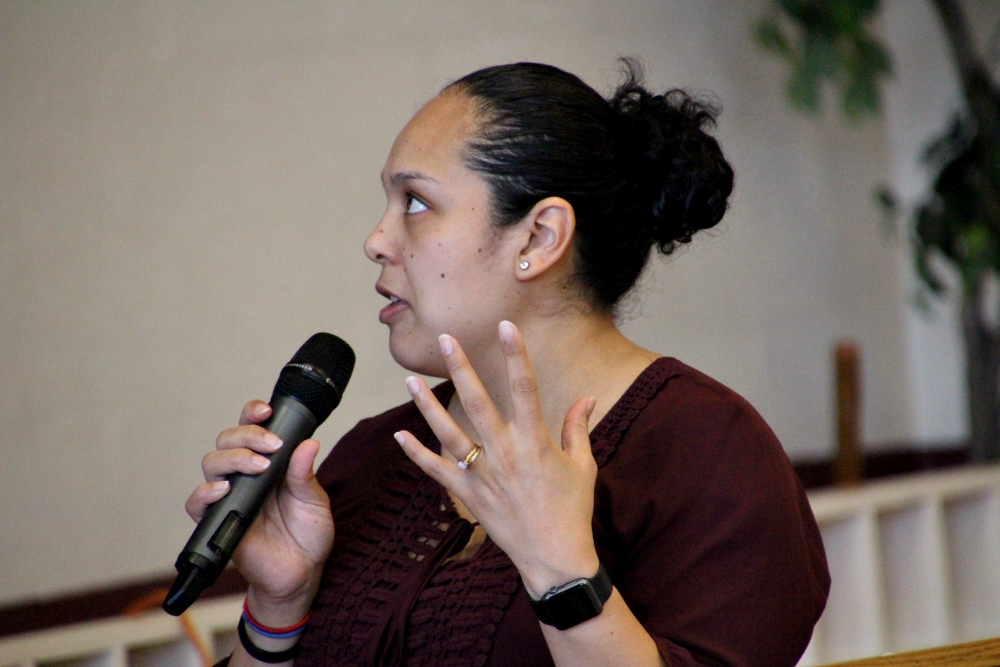 Nichole Flores, assistant professor of religious studies at the University of Virginia, addresses a workshop on racism and white supremacy Jan. 20 at the Church of the Incarnation in Charlottesville, Virginia. (James C. Webster)

The Catholic Church has "a rich, robust tradition of theology and practice that is directly related to racial justice or has the potential to do so," she said. "The need for religious activism for racial justice continues today. The path is long and laborious but it has multiple fruits."

Casa Alma's Brown was encouraged that many signed up to participate in follow-up action. "A great majority of those who attended are already active in ministries within the church and in service organizations in the broader community, so I know that their actions toward ending racism will ripple outward to inspire and engage others," she said.

Many participants said they would "begin a more purposeful examination of their own biases and are now more empowered to open difficult conversations with family and friends," according to Brown.

"We collected 41 written evaluations at the conclusion of the day," she said. "Of those, 30 people indicated that they signed up for a follow-up action."

"Many indicated that confronting their own biases or feelings was the most difficult" challenge of the day, she said.

The national Catholic group Call to Action worked behind the scenes and helped finance the gathering as part of its own anti-racism initiative.

Zachary Johnson, Call to Action's executive director, was encouraged that laypeople took the lead in organizing and promoting the event.

"This was a good beginning [because] this has not happened yet in the Catholic community," he said. "So many said that it was the first time they had contemplated these issues."

He said that Call to Action has "feelers from six or seven places" about holding similar anti-racism events, but noted that "it takes courage and time" from local leaders to succeed.

Johnson said he has been troubled to discover that white supremacist organizations, through their websites, have identified conservative Christians, including Catholics, as potential allies to spread their ideology of anti-Semitism and white superiority.

Last November, Call to Action held an online webinar to give its members an opportunity to reflect on and resist the impact of white supremacy in their parishes and communities. More than 40 members from across the United States participated, according to Call to Action, which says on its website, "We are currently in the process of forming resources for chapters committed to dismantling racism and white supremacy."

[James C. Webster is a freelance journalist based in Arlington, Virginia.]

A version of this story appeared in the Feb 9-22, 2018 print issue under the headline: Charlottesville Catholics explore racism.