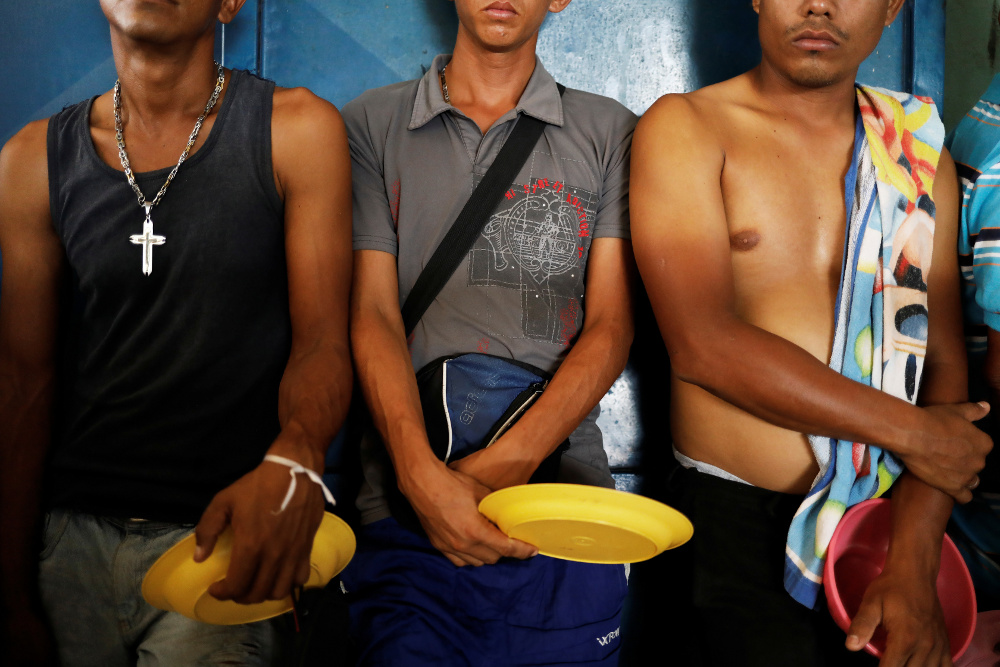 Venezuelans wait to receive food in 2017 at a Civil Defense shelter in Boa Vista, Brazil. Church groups provide meals at the shelter. In his message for World Day of Migrants and Refugees Jan. 14, Pope Francis urged countries to welcome, protect and integrate foreigners who cross their borders. (CNS/Nacho Doce)

A few months ago, Chego Escalona was a teacher in Venezuela. Now he's a security guard and janitor in a clinic in a crowded, dusty neighborhood on the east side of Peru's sprawling capital city.

But he does not regret the change. At home in Barquisimeto, Venezuela's fourth-largest city, he had seen the value of his monthly salary dwindle to the equivalent of $10 — not enough to buy food for his family, even if he could find a market stocked with products.

In Peru, he earns the minimum wage of about $260 a month, enough to support himself and send some money home.

"I know that if I go to the market tomorrow, I'll have enough money," he said.

That was not true in Venezuela, where food prices rose by more than 50 percent a month during much of last year.

Spiraling inflation, a shortage of necessities such as food and medicine, and high crime rates have driven hundreds of thousands of Venezuelans — estimates range from 700,000 to 2 million — to seek better opportunities in other countries.

Some have headed for the United States or Europe, traditional destinations for Latin American migrants, but after a decade-long economic boom in the region, others are seeking opportunities closer to home.

Many have headed for Chile and Peru, the two countries that Pope Francis will visit Jan. 15-21.

Many migrants have taken construction jobs in Iquique, Chile, making it a good place for the pope to speak out about their needs when he visits Jan. 18, said Pablo Valenzuela, national director of Chile's Jesuit Migration Service.

In his message for the World Day of Migrants and Refugees Jan. 14, Pope Francis urged countries to welcome, protect and integrate the foreigners who cross their borders.

The number of asylum seekers in Peru skyrocketed from 200-300 in 2014 to 11,000 last year, said Anali Briceno, who heads a Jesuit-run legal clinic for refugees in Lima. Most are Venezuelans who not only suffer economic hardship, but also feel that they are persecuted for their opposition to the government, Briceno told Catholic News Service.

The numbers have swamped Peru's system for processing asylum requests, she said. The Peruvian government has issued some 20,000 temporary stay permits to Venezuelan migrants who entered the country before July 28, 2017, enabling them to hold jobs and receive benefits, according to the country's immigration office.

Unlike other migrant waves that have swept through Latin America in recent decades, many Venezuelans have a college education and professional careers. In the countries that receive them, however, they often end up in the informal economy, working in unskilled jobs that pay minimum wage or less.

"We're starting from zero," Escalona said of himself and most of the people who rent rooms in the building where he lives.

He said he hopes he eventually can work as a teacher again. Meanwhile, he is thinking of starting a small business.

"Doors are closing there," he said of his home country. "Here the doors are open for many things."

After the 2010 earthquake and cholera epidemic in Haiti, Peru also saw a steady stream of Haitian migrants, mainly passing through on their way to Brazil, where they hoped to find construction jobs as that country prepared to host the soccer World Cup and the 2016 Olympic Games.

With Brazil's economy in a slump, Haitians are heading to other countries, including Chile, Valenzuela said. Parishes help them settle, particularly by offering Spanish classes, he said.

Many migrants who arrived in Chile in past years are now trying to bring their families to join them. In Lima, Escalona also plans to reunite at least part of his family. His oldest son arrived in Lima two months before he did, and he hopes his wife can join them soon. His two younger children would rather move to Argentina, where they think job prospects are brighter.

Argentina and neighboring Brazil also draw migrants from countries with which they share borders. In Sao Paulo, the interreligious Pastoral Center for Supporting the Immigrant works especially with Bolivians who go to the city to work in small businesses, sewing piecework for clothing companies.

Up to 400,000 Bolivians are believed to live in Sao Paulo, and there are as many as 20,000 piecework shops, said Flavio Rocha, a Maryknoll lay missioner who works with the center.

"There are a lot of problems with modern slavery," Rocha said of the system in which Bolivians recruit people from their hometowns with promises of jobs. 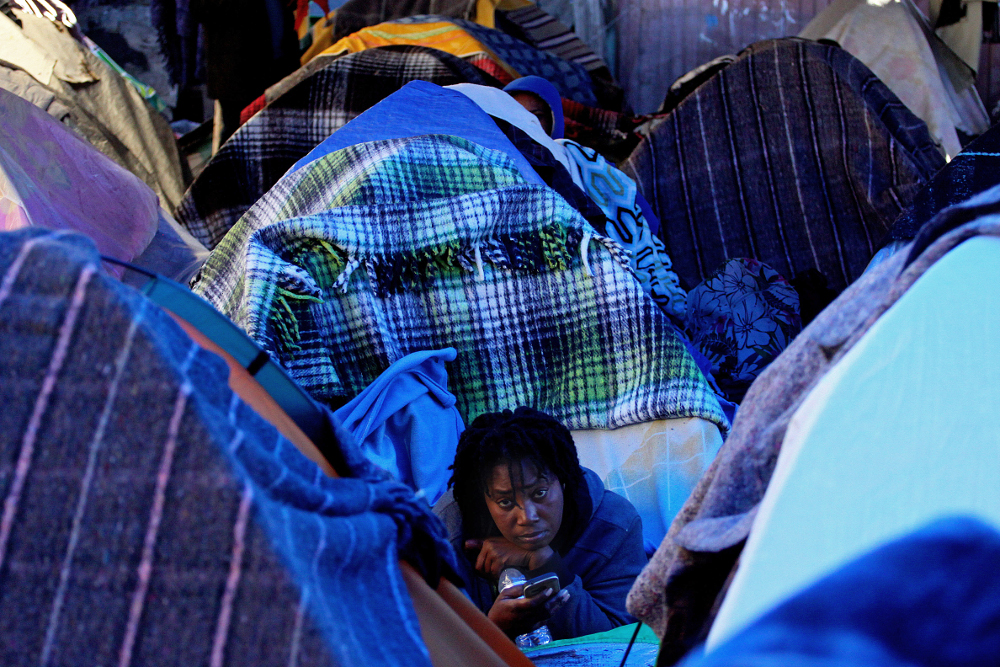 A Haitian migrant looks from a tent in 2016 at a refugee shelter in Tijuana, Mexico. In his message for World Day of Migrants and Refugees Jan. 14, Pope Francis urged countries to welcome, protect and integrate foreigners who cross their borders. (CNS/Alejandro Zepeda, EPA)

Migrants are vulnerable to slave-labor conditions, in which they are promised transportation and jobs, but must work to pay off the debt. Often the people who recruited or transported them take their identity documents. Without documents, people may be afraid to seek help.

Briceno said smuggling rings often operate along borders, helping people cross if they are turned back at immigration checkpoints. In Peru, such group take people across the poorly controlled borders with Chile and Bolivia.

The camps, often consisting of makeshift wood-frame buildings covered with sheets of blue plastic, spring up around unregulated mines, where men work around the clock, sluicing cobbles and mud to extract flecks of gold. Many of the workers have migrated to the illegal mines from the Andean highlands.

For years, church workers in Madre de Dios have tried to address the social and environmental problems related to gold mining, with efforts ranging from less-destructive mining techniques to shelters for trafficked women and girls.

In Lima, too, parishes are reaching out to migrants. Escalona, who was studying to become a permanent deacon in Venezuela, plays the guitar and sings in the chorus in his parish in Lima's Santa Anita district.

"I don't feel like a foreigner here," he said. "They've welcomed me. Wherever we go, we are church."