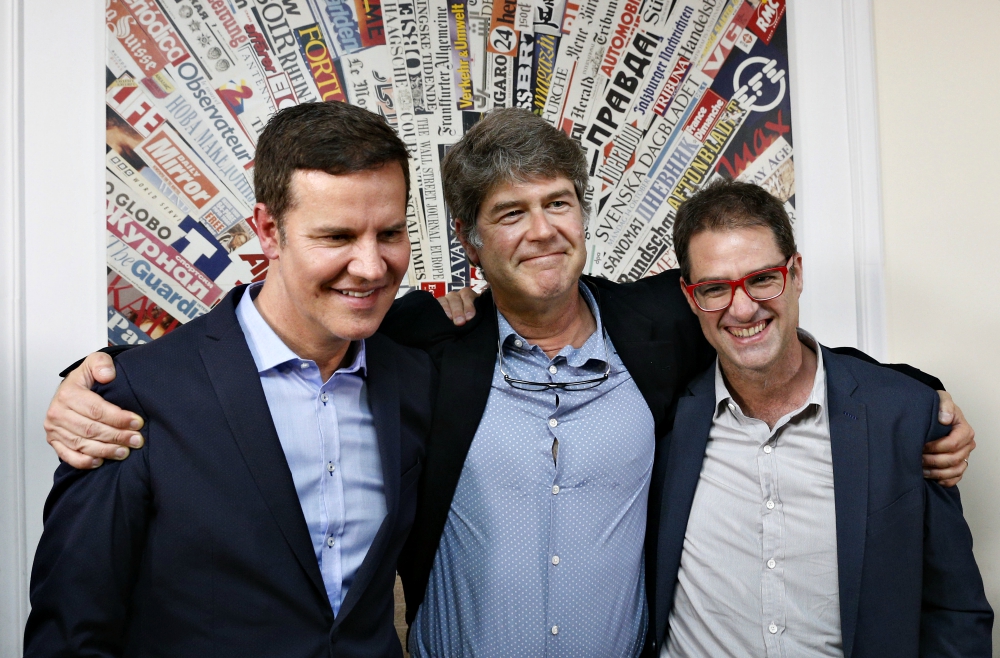 Three Chilean survivors of clergy sexual abuse who met with Pope Francis this week say the pontiff was "attentive, receptive and very empathetic" in their encounters together. Now they are waiting to see if he "transforms his loving words of forgiveness into exemplary actions."

Juan Carlos Cruz, James Hamilton and José Andrés Murillo each met with Francis individually for several hours over the weekend, and then again together April 30. The three, each abused as minors by Fr. Fernando Karadima, were invited to the Vatican by Francis after he admitted making "serious mistakes" in his handling of clergy sexual abuse cases in Chile.

"Pope Francis formally asked us for forgiveness, in his own name and on behalf of the universal Church," Cruz, Hamilton and Murillo said in a joint statement during a press conference May 2. "We expressed to him how the Church has the duty to become an ally and a guide in the global fight against abuse, and a refuge for victims, something that does not happen today."

The three abuse survivors spoke at the conference about their encounters with Francis in deeply personal terms.

Cruz, a communications professional in the United States, said he "never, never saw someone be so contrite," and relayed that Francis told him: "I was part of the problem. I caused this and I apologize to you."

Murillo, who leads the Chilean child protection organization Para La Confianza, said he thought the "most significant moment" of their conversation was when the pope said the cause of abuse was not just sin but also corruption. "When [Francis] said that, I thought maybe he's going to do something important," he said.

The meetings with the abuse survivors are part of a stunning turnabout for Francis, who faced the sharpest criticism of his five-year papacy during a January visit to Chile. During the visit, the pope defended his appointment of controversial Bishop Juan Barros Madrid, who survivors say as a priest witnessed some of Karadima's crimes.

While in the country, Francis twice called the accusations against Barros "calumny." But on returning to Rome, he sent Maltese Archbishop Charles Scicluna to Chile to interview abuse survivors and look into Barros' case.

After receiving a report from Scicluna, Francis admitted in an April 11 letter to Chile's bishops that he had made "serious mistakes" in his handling of abuse cases in the country "due to a lack of truthful and balanced information."

Cruz said May 2 that he met personally with Francis for more than three hours and was left with the impression that the pope had been "truly misinformed" about clergy sexual abuse in Chile. He said he was left with one question: "Who gave the pope bad information?"

"I didn't press him on what he knew and what he didn't know," said Cruz. "I did tell him that it hurt me tremendously what he had not said and what he had said when he called calumny."

Noting Francis' native country, Cruz added: "I've been speaking up for years. ... I said to him that it was hard for me to understand that our neighbor from Argentina wouldn't know what was happening."

Hamilton, a gastric surgeon, said survivors would probably never know exactly how Francis had become misinformed about abuse in Chile.

"It's time for us ... to look forward and wait," said Hamilton. "Everybody deserves, especially in this case, a second chance."

Murillo said that while the survivors were grateful to be asked forgiveness by Francis, they are also hoping to see changes from him following their meetings.

"We're waiting for actions," he said. "We always say that we are not here to do public relations, but for actions. That's what I'm waiting for."

Francis has called Chile's Catholic bishops to Rome for a meeting, which is expected to be held in coming weeks. Observers are waiting to see if that encounter might result in the removal from office of Barros or other prelates.

Hamilton alleged at the press conference that both the current and former archbishops of the Chilean capital of Santiago had covered up abuse. He added, "We would like them to go to jail."

Hamilton said that Murillo had personally handed a letter to Errázuriz in 2002 detailing some of Karadima's crimes. The Vatican did not sentence the priest to a life of prayer and penance until 2011.

Errázuriz has said that he erred in not acting against Karadima. After several of Karadima's victims went public in 2010, he said it was a mistake to not see accusations he had received years earlier against the priest as credible.

The three survivors have been staying at the Vatican's Casa Santa Marta guesthouse, where Francis lives.

Francis' visit to Chile was the worst-received yet of his some two-dozen trips abroad. He faced protests each day from those expressing anger at his appointment of Barros and the church's wider handling of the abuse crisis, and several churches were even firebombed before and during the visit.

In a letter to the presidents of various Latin American bishops' conferences, first reported by NCR, Errázuriz blamed some of the poor press coverage of the visit on Barros' choice to be available for media interviews.

A version of this story appeared in the May 18-31, 2018 print issue under the headline: Chilean abuse survivors await action.