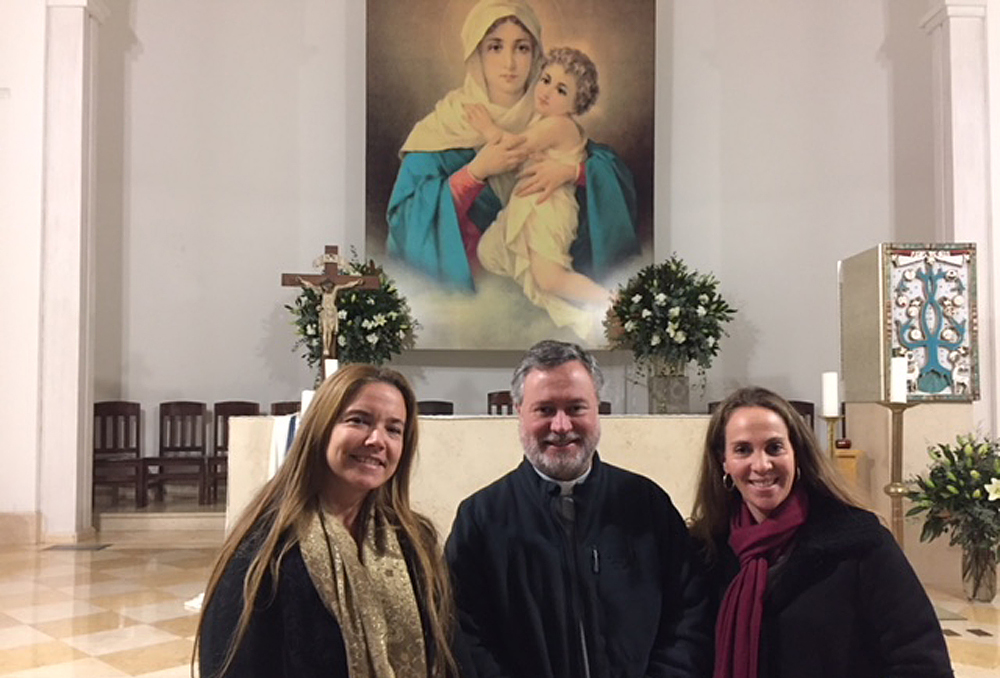 Like other Catholics, Teresa Correa, a mother of four and a member of the parish in the Chilean capital's upscale Las Condes neighborhood, has lost some of her confidence in the Catholic Church.

Correa admitted to Catholic News Service in early June that the clergy sexual abuse crisis has left her and her friends wondering where the church is headed. She said it's "time for the laity to take the lead and help out."

She also said it is important to be strong and brave during what is a difficult time for Catholics in Chile.

Her friend Pilar Concha, a mother of six, agreed.

"My children are between 15 to 6 years old," she told Catholic News Service. "They see what is going on in the press. When we eat together in the evening, they talk to me about it, especially the older ones. They say, 'Mummy, did you see what happened in such and such place with that bishop? Did you hear what the pope said?' "

The women's thoughts have been on the clergy sexual abuse crisis that has rocked the Chile's Catholic Church. The crisis deepened during the Pope Francis' visit in January and has remained a top news story for months.

The crisis focuses on Fr. Fernando Karadima who was sentenced in 2011 by the Vatican to a life of prayer and penance after he was found guilty of sexual abuse. Since then, abuse survivors have alleged that Bishop Juan Barros of Osorno — then a priest — had witnessed their abuse by his mentor, Karadima.

Francis initially defended his 2015 appointment of Barros as head of the Diocese of Osorno, but then apologized after receiving a 2,300-page report detailing the extent of clergy sexual abuse in Chile. The report was prepared by Archbishop Charles Scicluna of Malta, president of a board of review handling abuse cases within the Congregation for the Doctrine of the Faith, and his aide, Fr. Jordi Bertomeu Farnos.

In a letter released April 11, Francis said he had been mistaken in his assessment of the situation in Chile, and he begged for forgiveness from survivors and others he offended. He has met survivors at the Vatican and has been strong in his criticism of how the Chilean bishops handled the situation. All the Chilean bishops offered their resignations to the pope in response to their handling of the crisis.

The Vatican announced May 31 that Scicluna and Farnos would return to Chile "with the aim of advancing the process of reparation and healing of abuse victims." The two are scheduled to be in Santiago June 12-13 before going to Osorno June 14-17. At the end of the trip, they were to return to Santiago for two days.

Sitting at a table at their church, a peaceful white chapel built in a garden full of orange-colored autumnal trees, Correa and Concha discussed their faith and their role as parents. They said they face discussing what is happening in the church with their children and to reassure them, which isn't always easy when there is so much negativity to confront.

Fr. Patricio Moore, a priest at the church, focused on the positive.

"I think this crisis is necessary because the Chilean church has made mistakes and it is time to reform the church," he said.

Moore stressed that it is time to put Jesus at the center of the faith rather than church authorities. He said he thinks the bishops must change their role and become more transparent while exercising a bit less authority so that trust can be rebuilt among parishioners.

Despite being somewhat optimistic, Moore acknowledged that the church is enduring difficult times. Fewer people are attending Mass and at the college where he teaches, fewer people are seeking to be confirmed, largely because of what has happened.

In Plaza de Armas, a tree-lined square in the center of Santiago, the striking brown stone Metropolitan Cathedral rises along one side. People on their way to Mass June 3 passed tourists taking photos. Few would discuss the abuse crisis, with some cautiously saying too much power rests in the hands of church leadership and that they dare not speak out. Others said they have lost their faith.

"When I go to church, I feel pain and sadness that people are coming to suffer and not to be healed. There is too much guilt and anxiety," Ariela Lavado said, adding that while she still believes in Mary and Jesus, she has her doubts about the institution.

Back at their church in Las Condes, Correa and Concha said it was time to stop blaming church officials and to move on.

"The priests and bishops are human beings just like we are," Concha told CNS. "We all make mistakes. We have been baptized, so we are just as sacred as the clergy. We forget that and we leave everything up to them and we shouldn't."

Instead, Concha and Correa look to a future generation, one in which the church hierarchy is more horizontal than vertical.

"My dream is that from this crisis, we are able to learn and renew the church, I want the laity in Chile to help to make a new, better church," Concha said. "If you think back in history to the crusades and the Spanish Inquisition where they did terrible things.

"But out of that time came amazing people like St. Benedict and Ignacio Loyola (St. Ignatius of Loyola), so it would be wonderful if we produce a lay saint from Chile who renews and regenerates the church and makes us better."