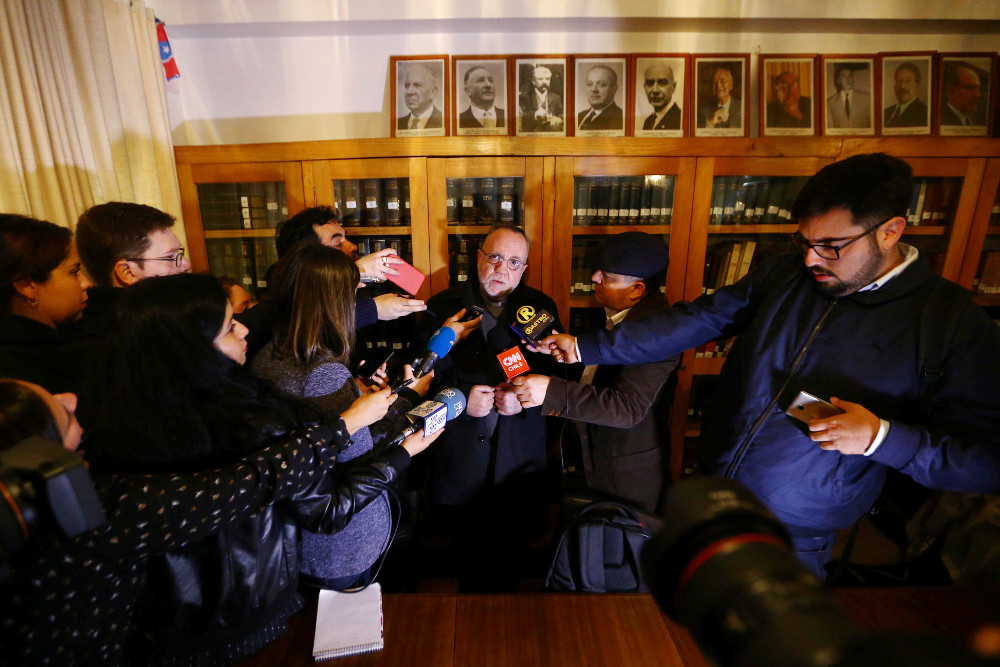 Chilean Fr. Francisco Astaburuaga Ossa talks with the media May 23 in Santiago after receiving an invitation to meet with Pope Francis at the Vatican to discuss the sexual abuse scandal. (CNS/Ivan Alvarado, Reuters)

After meeting with Pope Francis for more than four hours, a Chilean priest who suffered abuse and a priest who ministers to survivors said they felt comforted and hopeful for the church's future in their country.

The pope met June 2 with five priests who the Vatican described as being "victims of abuses of power, of conscience and of sexual abuse."

Two priests who have accompanied the survivors "in their juridical and spiritual journey" and "two laypeople involved in this suffering" also were invited by Pope Francis. They were all guests at the Domus Sanctae Marthae, the Vatican residence where Pope Francis lives.

Speaking to journalists after the groups' final meeting with the pope June 2, Fr. Francisco Astaburuaga Ossa, who has accompanied survivors of abuse, said the pope asked forgiveness for the abuse and subsequent cover-ups committed by members of the church.

The four other members of the group wished to remain anonymous.

De la Fuente, a survivor of abuse, told journalists that he came to Rome with three expectations: "gratitude for the pope's invitation; the comfort of knowing that we will meet with Peter, with the Holy Father; and also hope."

The pope, he said, "greatly exceeded my expectations."

"I have an immense gratitude for his welcoming. I was greatly comforted to be completely understood by an admirably empathetic person, who suffered with my pain, and I have great hope because he has a very ample and profound understanding of the problem," he said. The pope also has identified "concrete paths for moving forward."

Although de la Fuente did not provide details of the decisions the pope has made with regard to the culture of abuse and cover-up in the Chilean church, he said that they would take time and involve steps for "the short, medium and long term."

Astaburuaga said that he was greatly consoled by the pope and confirmed that his over 20 years of counseling survivors of abuse "was not in vain."

The pope celebrated a private Mass with the group June 2 and met with members of the group together and individually, a Vatican statement said.

The aim of the meetings was to achieve a greater understanding of "the reality lived by some of the faithful and Chilean clergy," the Vatican statement said.

"With the help of these five priests, the pope seeks to remedy the internal rupture of the community. Thus, rebuilding a healthy relationship between the faithful and their shepherds can begin, once all are conscious of their own wounds," the Vatican said.

Like the three laymen Pope Francis hosted in late April, the priests were abused by Fr. Fernando Karadima and his followers in the parish of Sagrado Corazon de Providencia, also known as the community of "El Bosque" ("The Forest").

Known as an influential and charismatic priest, Karadima founded a Catholic Action group in the wealthy Santiago parish and drew hundreds of young men to the priesthood. Four of Karadima's proteges went on to become bishops, including Bishop Juan Barros of Osorno.

However, several former seminarians of "El Bosque" revealed in 2010 that the Chilean priest sexually abused them and other members of the parish community for years. One year later, Karadima was sentenced by the Vatican to a life of prayer and penance after he was found guilty of sexual abuse.

Before the meetings began, Astaburuaga told Catholic News Service he was going with an "open heart and mind to be surprised by God."

"Tomorrow I go with an open heart to speak with the pope. He wants to listen to us and we want to share with him," he told CNS June 1.

A version of this story appeared in the June 15-28, 2018 print issue under the headline: In letter to Chileans, Francis decries church's 'culture of abuse and cover-up'.