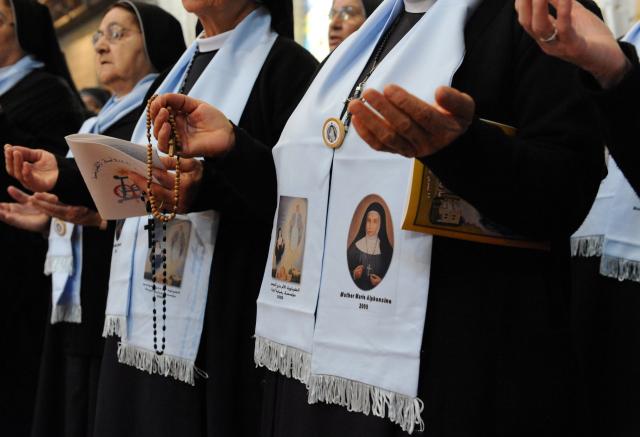 NAZARETH, ISRAEL . A newly beatified nun from the Holy Land could serve as an inspiration for Christians who remain there, said the Latin patriarch of Jerusalem.

The Nov. 22 beatification “breathes upon us a new spirit, renews our church and invites us to the happy hope that we ourselves, too, can be saints like her,” said Latin Patriarch Fouad Twal, referring to Blessed Soultaneh Maria Ghattas, founder of the Dominican Sisters of the Holy Rosary of Jerusalem.

“What the church needs most is the witness of saints,” he added in his homily at the beatification, a major step toward sainthood. “Holiness is the sign of the church’s credibility.”

Twal beatified Mother Marie-Alphonsine, as she is known, during a Mass attended by more than 3,000 people, who began filing into Nazareth’s Basilica of the Annunciation almost two hours before the ceremony began. They filled the first-floor sanctuary, where the main ceremony took place; a closed-circuit TV showed the proceedings to pilgrims packed into the ground-floor sanctuary.

By the time the Mass began there was standing room only in both sanctuaries, and people crowded into the aisles, inching forward in the main sanctuary toward the metal fence separating the section next to the altar where members of the Rosary Sisters sat along with other dignitaries, including Helen Zananiri, whose prayer paved the way for Mother Marie-Alphonsine’s beatification.

Zananiri had prayed for the protection of her daughter following a premonition just hours before a group of girls fell into a collapsed outdoor septic tank six years ago. All of the girls, including Natalie Zananiri, who was under the toxic water for at least five minutes according to testimony given in the beatification process, were pulled out unharmed.

“This is a very big event for us, for Christian Palestinians in this land,” said Helen Zananiri. “It shows all the world that there are Christians who speak Arabic. We are very proud we live in this holy land.”

Natalie Zananiri, now 23, said before being rescued she had never heard of Mother Marie-Alphonsine and had “not really” believed in miracles. She said she now believes.

Nadia Tadros, 16, a student at Rosary Sisters’ High School in East Jerusalem’s Beit Hanina neighborhood, witnessed the beatification from one of several pews she and her classmates had claimed early in the morning.

Sr. Hortense Nakhleh, the school’s principal, said although she was looking forward to the ceremony, what was of greater significance to her would follow the beatification.

“After this my mission is to do exactly as our foundress. As she lived we have to live; as she was the shining face of the Lord so, too, we have to be the same in our society,” she said. “For me that is more important.”

Some 23 Rosary Sisters from Lebanon and 50 from Jordan, along with a large number of Catholics from Jordan, began the Israeli visa application process in August and received their permits to travel only days before the ceremony.

Sr. Aline Barakat, principal of a Rosary Sisters’ high school in Jbeil, Lebanon, said that in addition to asking Mother Marie-Alphonsine to “give us peace and give us grace … to be like her,” the sisters also asked her to send vocations.

Church bells rang out as the Mass began and a sense of excitement swept over the congregants. They applauded enthusiastically when a little girl, dressed in the habit of the Rosary Sisters and representing the order and its founder, walked with her mother to the section where the Rosary Sisters were sitting and was hugged and kissed by several of the nuns.

Applause again exploded through the sanctuary and people stood up in their places, straining to see as Auxiliary Bishop Giacinto-Boulos Marcuzzo of Jerusalem completed reading in Arabic the text of the apostolic letter from Pope Benedict XVI, which had been read in Italian by Archbishop Angelo Amato, prefect of the Congregation for Saints’ Causes.

As the bells grew to a crescendo and the white curtain covering the several-foot tall picture of Mother Marie-Alphonsine was lifted, several Rosary Sisters began to cry and wave their hands toward the picture, which hung from a balcony. Women in the pews behind began to trill in the traditional Arabic way of celebration.