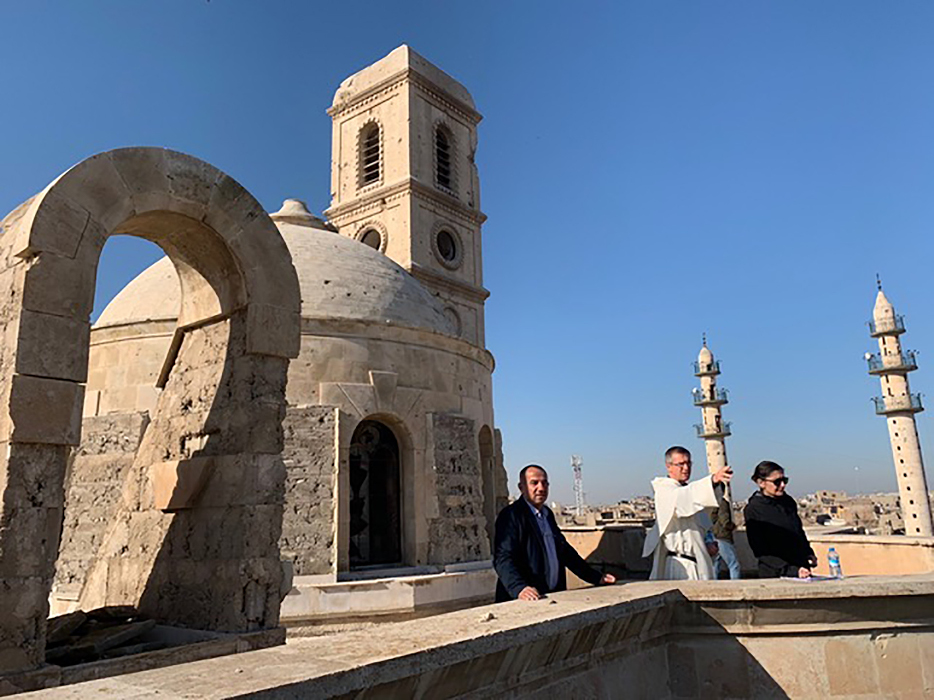 Dominican Father Olivier Poquillon is seen on a site visit to Our Lady of the Hour Church in Mosul, Iraq, with a UNESCO team. Christians and Muslims hope a project to reconstruct Mosul's iconic places of worship, badly damaged by Islamic State militants during their 2014-2017 occupation of the city, will also help to rebuild trust between Iraq's fractured religious communities. (CNS/courtesy Ordo Praedicatorum)

Christians and Muslims hope a project to reconstruct Mosul's iconic places of worship, badly damaged by Islamic State militants during their 2014-2017 occupation of the city, will also help to rebuild trust between Iraq's fractured religious communities.

"Walking in the streets of Mosul, I saw a young neighbor, probably born after the 2003 U.S.-led invasion of Iraq, who never knew peace time in the city," French Dominican Father Olivier Poquillon told Catholic News Service from the northern Iraqi city of Irbil.

"'Oh, you are Christians,' he told me and the group. 'Come back, come back here to live in peace together,' he implored us."

"We know it will be a challenge for everybody to rebuild trust among people, families and communities. But this is our faith. We believe in a God of mercy, and we believe we have this humanity as a common responsibility," Poquillon said.

The $50.4 million UNESCO project, funded by the United Arab Emirates, envisions rebuilding not only Mosul's landmark Great Mosque of al-Nouri and its minaret, but also the renowned Conventual Church of Our Lady of the Hour, along with the Al-Tahera Syriac Catholic Church.

Islamic State leader Abu Bakr al-Baghdadi proclaimed a "caliphate" from the al-Nouri Mosque's minaret in 2014 and, three years later, had it blown up as Iraqi government forces retook the city. The battle for Mosul lasted almost nine months, leaving large areas in ruins and killing thousands of civilians. More than 900,000 others were displaced from the city.

The extremists forced tens of thousands of Christians to choose conversion to Islam or death, if they remained. Instead, they escaped northward, while others fled abroad.

The Dominicans built Our Lady of the Hour Church in the 19th century as a place of encounter. Their history in Iraq dates back to the 13th century, soon after the founding of the order, when their first friar arrived at the behest of the pope. In the 17th century, the Dominicans in Mosul established educational instruction, health care, and sought to unite local Christian communities with Rome.

Later, both large and small seminaries associated with this church educated Iraq's Chaldean Catholic Cardinal Louis Sako and a host of other top Catholic clerics in the country. Mosul was always considered, along with the Ninevah Plain, the ancestral heartland of Iraq's Christian community. Our Lady of the Hour's famed clock tower, the first in Iraq, was gifted by Empress Eugenie de Montijo, wife of Napoleon III, in 1876. The clock installed in 1880 was a famous four-dial clock.

Poquillon, who oversees the project on behalf of the Dominicans, is excited that it is Mosul's citizens, now nearly 99% Sunni Muslim, who requested that UNESCO include both Catholic churches as absolutely necessary to the city's rebuilding efforts.

"It's not a top-down initiative but bottom-up. They (Mosul's Sunni Muslims) told UNESCO that if you rebuild the Great Mosque, the old city will never again be our city without the Dominican church," he recounted. "We hope, by the help of God, that this place may return as a sanctuary for the Virgin Mary, venerated by Christians and Muslims alike."

"The project is a great opportunity because our mission has always been to support the people and to help value the fantastic heritage of this region. Mesopotamia is part of the Holy Land. Abraham was from Ur and Mosul is Ninevah," Poquillon said. "It is very important not to lose this perspective and to see how we can contribute to help people engage together for the common good."

"It is a symbolic commitment of the authorities to tell the Christians that they are indeed part of the community. This the is heart of the joint message between Pope Francis and the grand imam of Al-Azhar to move from minority status to full citizenship," he said of the leaders' signed agreement, "Document on Human Fraternity for World Peace and Living Together."

Poquillon said Christian and Muslim workers will once again rebuild Mosul's landmark mosque and churches as they had initially done in the past.

"We are sharing a joint responsibility to rebuild for the common good," he said. He noted that the Dominicans are not employers for the project, but are accompanying UNESCO on this mission.

A recent spike in COVID-19 cases forced authorities to impose a strict curfew and lockdown from June 1 until midnight June 6, halting work. Northern Iraq was already under a two-month curfew.

"We have to keep the historical stones," he said of plans to maintain the same cityscape afforded by both the mosque and the church.

"The church is at the heart, the crossroads of the old city of Mosul, on the corner of the two main streets of the city. So, when the people entered the city, they first saw the Clock Tower of Our Lady of the Hour and the Great Mosque minaret," UNESCO said.

Poquillon said 50 Christian families have returned to Mosul, likely due to the cost of living being lower there than in Irbil or the towns of the Ninevah Plain. But the hope is that Christians and Muslims alike will find jobs and homes in Mosul once again, and perhaps the project will contribute to that.