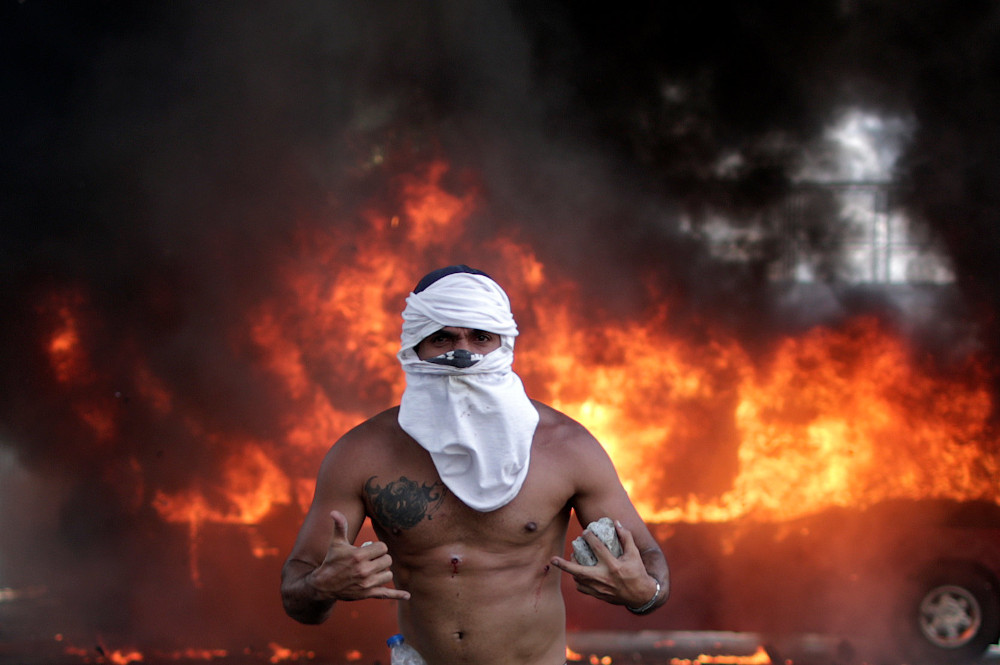 An opposition demonstrator gestures while carrying stones in front of a burning bus during a violent protest near Carlota airbase in Caracas, Venezuela, April 30, 2019. Armored vehicles plowed into anti-government protesters as troops loyal to Venezuelan President Nicolás Maduro tried to restore order; opposition leader Juan Guaidó took to the streets in an attempt to lead a military uprising against the embattled president. (CNS/Ueslei Marcelino, Reuters)

While protests against Venezuelan President Nicolás Maduro raged across the country, National Guard forces loyal to the embattled head of state launched tear gas at churchgoers attending Mass at a local parish.

In a letter published May 2 by Fides, the news agency of the Congregation for the Evangelization of Peoples, Bishop Mario del Valle Moronta Rodríguez of San Cristóbal said chaos erupted in Our Lady of Fatima Church when two National Guard members entered the parish on motorcycles as Mass was concluding.

The bishop said that subsequently, "a horde of 40 Bolivarian National Guard members," led by a general known as Ochoa, tried to enter the church and berated the pastor, Fr. Jairo Clavijo, after he forbid them from entering.

"Not pleased with that, the members of the Bolivarian National Guard launched tear-gas bombs in the church, causing an immediate evacuation of the sacred place where there was a good number of faithful, including many elderly people," Moronta said.

In the ensuing chaos, he added, a religious sister in the church fainted.

"This event is very serious, and it is an attack against the Catholic Church. I hold General Ochoa and the military authorities in the region responsible for this vile event that speaks to the will of the attackers who do not respect human dignity nor fear God," Moronta said.

Expressing solidarity with Clavijo and the parish community, the bishop said the diocese will "make decisions accordingly and promote actions that they deem relevant."

News of the attack comes on the heels of massive nationwide protests after Juan Guaidó, the opposition leader who declared himself interim president, rallied supporters April 30 to protest Maduro's government.

In various parts of the country, members of the Venezuelan military and National Guard who support Guaidó clashed with forces loyal to Maduro. The conflict has also increased tensions between the United States, which supports Guaidó, and two countries allied with Maduro's administration: Russia and Cuba.

"The number of wounded and detained continually increase," Azuaje said. "We ask for respect for dignity and the human rights of citizens as well as the freedom to protest peacefully. We ask that the repression may cease."