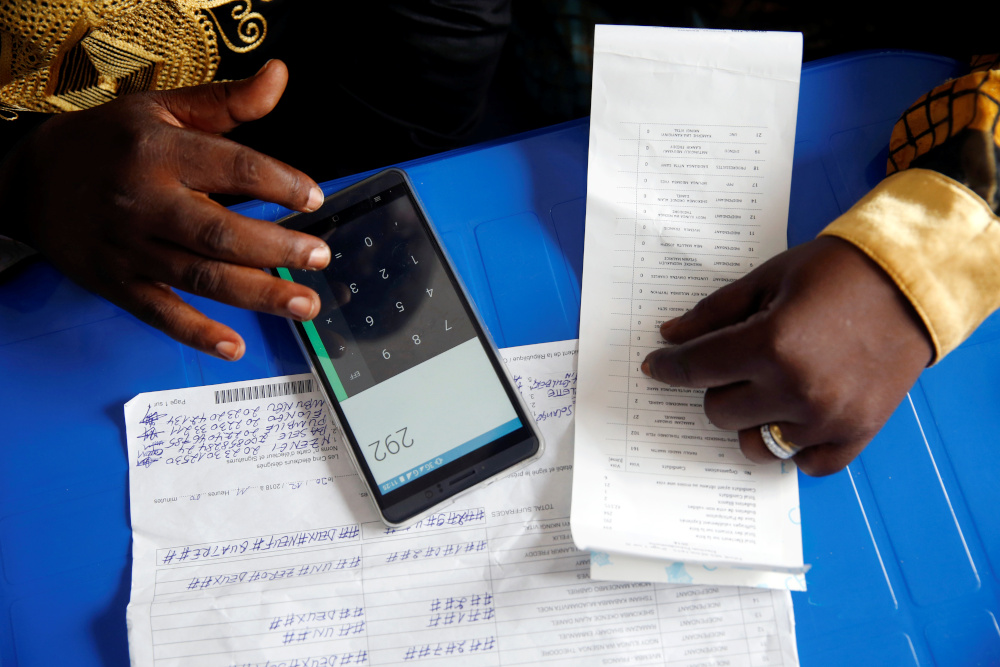 An official of the Congolese Independent National Electoral Commission uses his phone to calculate the numbers of presidential election votes at a tallying center in Kinshasa Jan. 4, 2019. Catholic leaders in Congo have gathered more than 1.5 million signatures on a petition that demands local elections to curb corruption and strengthen democracy. (CNS/Reuters/Baz Ratner)

Catholic leaders in Congo have gathered more than 1.5 million signatures on a petition that demands local elections to curb corruption and strengthen democracy.

"Democracy must have roots right down to (the) local level, and people must be allowed to designate who governs them," said Msgr. Andre Massinganda, deputy secretary-general of the Congolese bishops' conference.

"The Catholic Church stands ready to help obtain what's demanded for the good of the Congolese people – it won't ever shirk its true mission," he said.

In an Aug. 14 Catholic News Service interview, Msgr. Massinganda said the petition, launched in May with the Church of Christ, was the largest petition in the country's history, with 20 times the number of backers required to push through a constitutional revision.

"The authorities can't ignore these demands – we must hope they respond positively by agreeing to organize the elections," the bishops' conference official said.

"There have always been great problems with voting here. But if the authorities have the will, they'll find ways of surmounting them, thus removing a source of corruption which gravely hampers development."

Elections of mayors, town councilors and local administrators, the first under Congo's 2006 constitution, were scheduled under an agreed timetable for Sept. 22, nine months after Felix-Antoine Tshisekedi replaced the long-entrenched Joseph Kabila as head of state in a long-delayed Dec. 30 presidential ballot.

However, inaction by Congo's Electoral Commission triggered protest marches and sit-ins in April, and on May 28, the petition was launched at Kinshasa's interdiocesan center.

The document said the Congolese people, as "primary sovereign," were demanding local elections by Dec. 31 as a mark of "respect for the rule of law."

It added that "true democracy and development begin at the base, not the summit," and should no longer be "confiscated from the people."

"Local elections are the foundation for democracy and decentralization," the church petition said.

"They will put an end to a system of appointments that lies at the heart of nepotism, clientelism and corruption, contradicting the constitution, but also and above all depriving citizens of services they have a right to."

Msgr. Massinganda told CNS that the Catholic Church, which accounts for two-thirds of Congo's 67.5 million inhabitants, had long contributed to the civic formation of voters and was ready to provide practical help. Last December, it deployed 40,000 observers for the presidential ballot.

"We're maintaining the same impetus now as before – to ensure the cycle of elections begun in 2018 is completed," he said. "This is why we're mobilizing public opinion to ensure they're not forgotten about, as happened in previous years, and that people are able to watch over the exercise of local power."

He said Tshisekedi had not finalized his government's composition, making it too early to assess the likely direction of church-state ties.

"Having received the petition, however, the president and his officials will have to respond to the hopes and aspirations of the Congolese people and get to work for the good of the whole nation," he said.

Persistent violence by armed groups in mineral-rich Congo has left 4.5 million people displaced and a fifth of the population needing basic assistance, according to the United Nations. An Ebola epidemic has left nearly 1,900 people dead in the country's eastern provinces, according to Aug. 12 government figures.