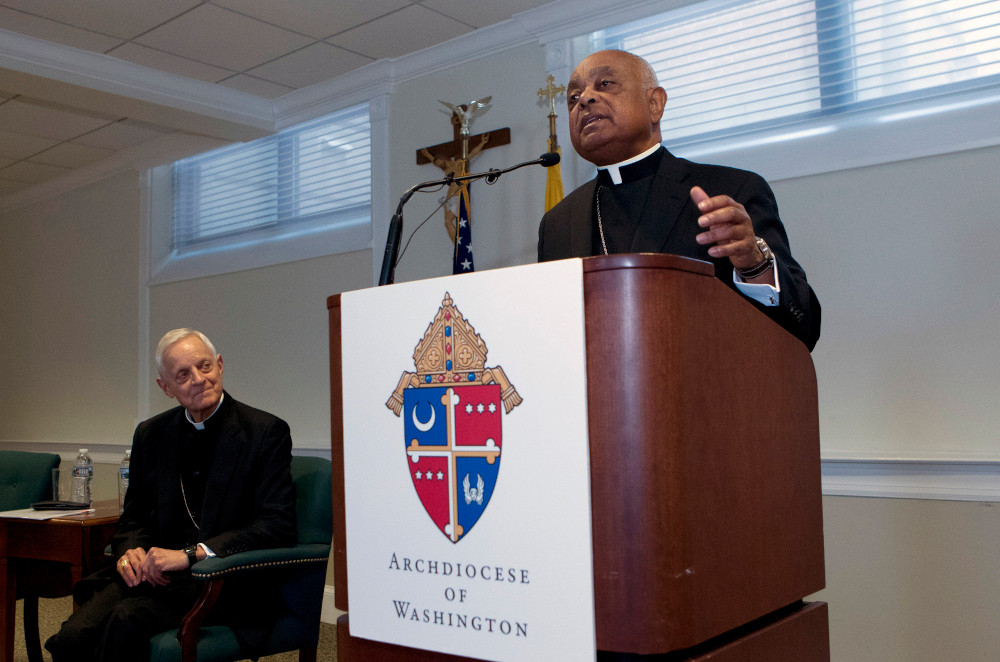 Editor's note: This story was updated on June 12 at 10 p.m. CDT to include comment from the Detroit Archdiocese.

A conservative Catholic publication has sparked backlash after it released a video on June 11 referring to the African American archbishop of Washington as an "accused homosexual," a "Marxist" and an "African Queen."

Church Militant, a Catholic website known for its incendiary editorial style and whose mission is to "battle against sin, the devil and the demonic," published the video, which criticizes Archbishop Wilton Gregory, the first African American to head the Archdiocese of Washington, for his clashes with President Donald Trump.

Michael Voris, the founder of Church Militant, repeatedly refers to Gregory as "the African Queen" throughout the video. He also accuses the archbishop of lying when the cleric criticized the St. John Paul II Shrine in Washington for hosting Trump last week.

The visit occurred the day after hundreds of demonstrators protesting against racism were forcibly cleared — along with Episcopal clergy — from Lafayette Square near the White House. Shortly after the demonstrators were cleared away, Trump posed for photographs while holding a Bible in front of St. John's Episcopal Church.

"Saint Pope John Paul II was an ardent defender of the rights and dignity of human beings," Gregory said in a statement last week. "His legacy bears vivid witness to that truth. He certainly would not condone the use of tear gas and other deterrents to silence, scatter or intimidate them for a photo opportunity in front of a place of worship and peace."

The Church Militant video triggered swift backlash from prominent Catholic scholar Anthea Butler, who serves as associate professor of religious studies and Africana studies at the University of Pennsylvania.

She called the video racist.

"As a black Catholic, I'm appalled," Butler told Religion News Service. "At a time of racial division in this country, Church Militant produced this racist diatribe in the hopes of creating more fissures within the church. … They are willing to step over the bodies of black people in order to promote their filth."

She added: "For them to do this, in this particular time of pain in our country, is a slap in the face to every black Catholic in America."

Butler noted that Church Militant, which has a long history of inflammatory videos, operates within the Archdiocese of Detroit. She called on Archbishop Allen Vigneron, head of the archdiocese, to condemn the video and Church Militant, arguing that anything less is a disservice to black Catholics.

"By allowing Church Militant to continue with these kinds of racist diatribes in his archdiocese, (Vigneron) is basically saying to the black Catholics of Detroit that they don't matter," she said.

The Rev. James Martin, a Jesuit priest who has been repeatedly criticized by Church Militant several times over the years, also described the video as "racist hate speech" and called on the archbishop of Detroit to respond.

"Will Archbishop Vigneron or anyone in the (U.S. Conference of Catholic Bishops) condemn such #racist hate speech?" The Jesuit priest tweeted.

“Racist and derogatory speech wrongfully diminishes the God-given dignity of others," Vigneron said in a statement. "It is not in accord with the teachings of Christ. As our nation continues its important conversation on racism, it is my hope that the faithful will turn from this and all other acts or attitudes which deny the inherent dignity shared by all people.”

Officials also noted that Church Militant was reprimanded by the archdiocese in 2011 when it was told to change its name from "Real Catholic TV" because it "lacked the authorization required under Church law to identify or promote itself as Catholic."

Representatives for the Archdiocese of Washington, the U.S. Conference of Catholic Bishops, and Church Militant did not immediately respond to requests for comment.

Jamie Manson, an editor and columnist at the National Catholic Reporter, blasted the video on Twitter.

"Michael Voris's hate speech is an ugly collision of racism and homophobia," she tweeted, noting that June is Pride Month.

Voris makes several unsubstantiated claims in the video, such as implying that Gregory is part of a "gay cabal" within the Catholic Church.

Voris also reprimands Gregory for issuing a statement in which he referred to the tear-gassing of demonstrators in Lafayette Square, arguing that tear gas was not used.

However, while the U.S. Park Service initially insisted tear gas was not used during the expulsion of demonstrators, officials at the agency later said that statement was a "mistake."

Canisters labeled as "CS" gas — which are almost universally described as tear gas — were also found at the scene by journalists.

Butler said the video reminds her of the kind of racism many black Catholics experience in the United States.