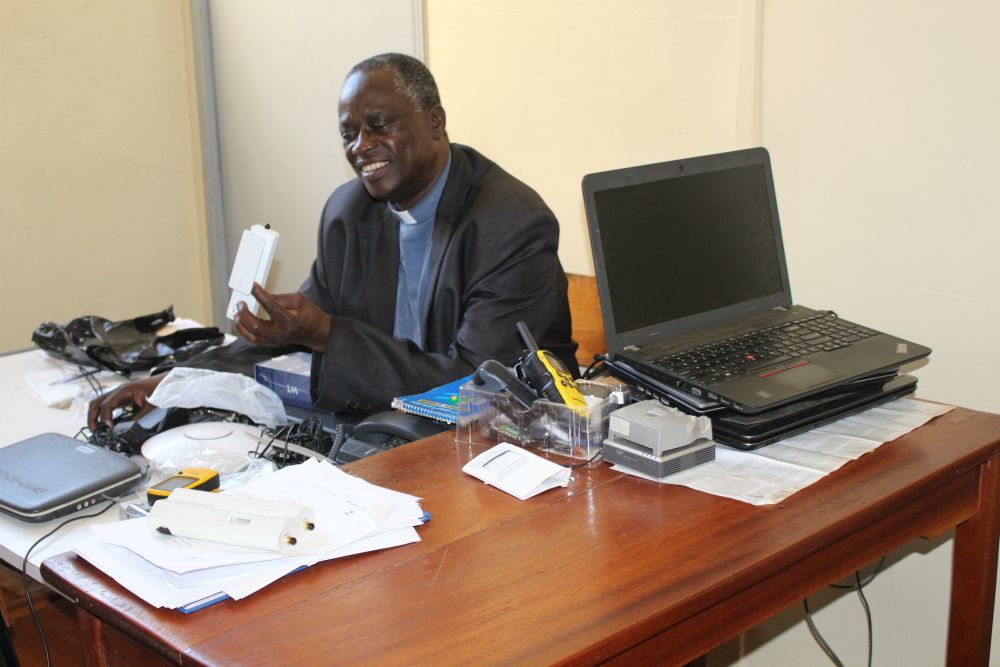 If your internet is down in northern Uganda, you might need to call your local priest or sister.

The Catholic Church has become one of the major internet providers in northern Uganda built on people's needs for a reliable, innovative communications network during Joseph Kony's reign of terror in the 2000s.

Beginning in 1987, a cult leader named Joseph Kony of the Lord's Resistance Army led a campaign of terror against northern Uganda, killing more than 100,000 people and displacing two million. In the early 2000s, Lord's Resistance Army soldiers kidnapped young children and forced them to become soldiers, committing atrocities against their own villagers. [Global Sisters Report has reported on sisters helping to rehabilitate returning soldiers.]

Rebels abducted people on the roads and planted roadside bombs and landmines, making travel dangerous. The rebels learned how to hack into the radio communication that the Catholic Church used to coordinate priests traveling between parishes. Mobile phones were not widely used because the network didn't cover northern Uganda, and landlines were often down.

"This idea came into play, could we use voice over internet technology to send information that no one else could hear?" said Tonny Okwonga, who today is the Chief Operations Officer for BOSCO-Uganda, the church's internet service in northern Uganda. "The church was trying to help people get out of isolation," Okwonga explained. "Priests and catechists were getting abducted, landmines were being planted, but there was no way to send information because you couldn't travel."

Voice over Internet Protocol, also called VoIP, is the kind of communication technology utilized by Skype and similar companies, basically a phone call over an internet network. The technology was already common in 2007, but in Uganda, the church had to first build internet infrastructure to support it.

Even today, Uganda is still in the process of laying the fiber optic cables that connect its citizens to the internet. Just 19 percent of Ugandans have internet access, and data networks in Northern Uganda are weak and unreliable even minutes outside the regional capitals. Much of northern Uganda, a remote and sparsely populated region, is still without access to fiber optic cables.

The country has the eighth-most expensive internet in the world. Broadband internet costs, on average, $72.15 per month. That's wildly out of reach for a country where 35 percent of people live on less than $2 per day. In more remote places, where poverty is even greater, monthly internet bills can soar to over $150.

The Catholic Church has traditionally used radio stations to reach the people in Uganda and other neighboring countries. In Uganda, each diocese has their own radio tower and communications office. These radio towers were key to getting the church to the next frontier of communication. 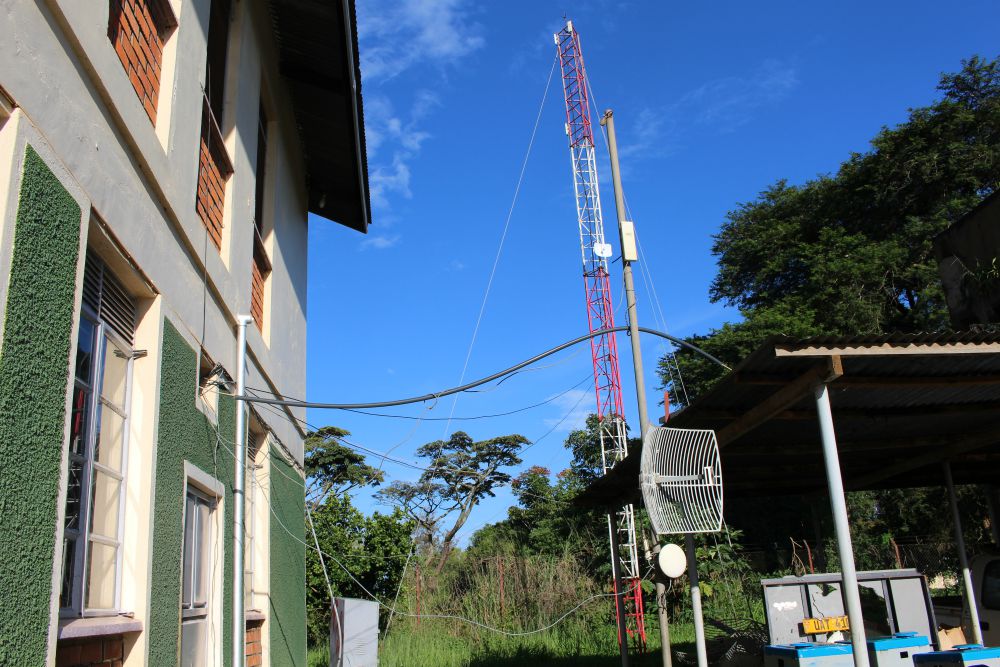 The church utilized existing radio antennas, like this one in Gulu, to affix the long-range wifi boxes. (Lilly Driciru)

Gus Zuehlke, a catechist from Indiana who got to know Ugandan priests who were on student exchange programs at the University of Notre Dame, visited Gulu, a regional capital of a northern district of Uganda in 2003, and started exploring ways to solve the lack of communication. With the help of information technology experts, he eventually settled on a method utilizing special wireless internet (wifi) over low-frequency waves. The best places to station the wifi boxes? Radio towers, which are high above buildings.

When the low-frequency wifi boxes are in "sight" of one another, meaning no geographical masses block the signals, they can extend wifi for miles — up to 40 km (25 miles) in some cases. Because the church already has a network of radio towers in almost every diocese, they had an existing network of ready-made points to connect the wifi boxes.

The wifi boxes are hooked up to electricity, but power often fails in the region. To ensure consistent internet access, the boxes are connected to solar panels, which charge batteries for back-up power. 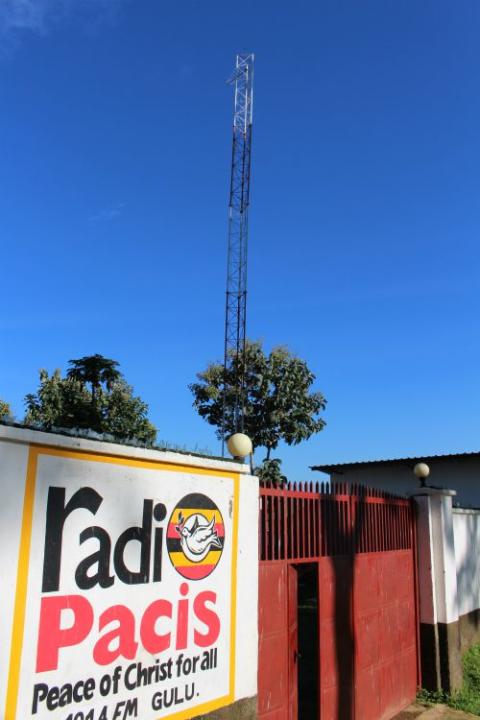 The Catholic Church has long maintained a network of Catholic radio stations across Uganda, such as Radio Pacis in Gulu. (Lilly Driciru)

So, BOSCO, which stands for "Battery Operated Systems for Community Outreach," is utilizing the church network to provide internet, and as well as computer literacy education. The organization also has 32 Community E-Learning Centers, which teach computer literacy to youth and residents who otherwise would not have computer access.

The centers and regular internet access have had far-reaching effects. One example: Sisters who run schools can now file their paperwork to the Ministry of Education at the BOSCO E-Learning Center in Gulu, rather than taking hard copies via bus to Kampala, a six-hour trip each way.

The government is also trying to digitize its processes, implementing electronic registration for schools and health care, which means that some people without internet access might be left out of essential public services. BOSCO is helping to address that barrier.

BOSCO also has a local intranet, which connects all of the BOSCO computers in the various E-learning centers. This has proved a boon for farmers, who visit the centers to check crop prices in different areas or make deals.

"If you produce sesame seeds or beans, you can ask someone in another community if it will sell better in that area," said Okwonga. "People are selling their chickens online. [The BOSCO intranet] is a marketing platform; people communicate with each other and then pick the things up."

Okwonga said they have about a 70 percent success rate with their target population becoming computer literate. Previously, people relied on radios for information, Okwonga explained. "But now, information can be gotten from the internet in addition to traditional communication." Besides the economic and educational benefits, there's also a social aspect in bringing young people together, he said. 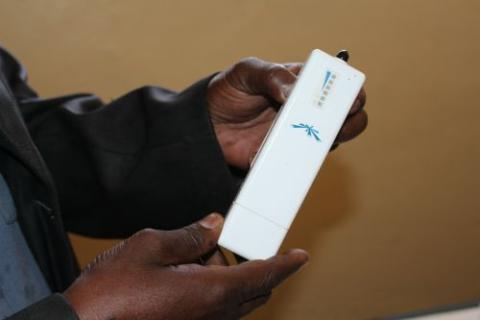 like information and communications technology and enhancing human rights," he said. In 2016, the United Nations passed a non-binding resolution that purposefully disrupting internet for political reasons is akin to violating human rights, expanding the idea of internet access as a basic human right.

Internet access provides several benefits to the Archbishop Flynn Senior Secondary School, which has been connected via BOSCO for two years, said John Bosco Komakech Aludi, a school board member and director of CARITAS-Gulu Archdiocese. School administrators now share reports ahead of board meetings, students can publicize their tree-planting campaign and talk to students around the world about other environmental initiatives, he said.

Still, the BOSCO internet has drawbacks. The non-profit organization isn't licensed to do commercial internet, making it difficult to raise funds to expand. Thick forests or other obstacles can block some people from accessing the wifi waves, even if they are located very close to the radio tower. Its low cost also has an unintended consequence, making it even less appealing for companies to lay fiber optic cables, already expensive because of the terrain.

BOSCO is trying to partner with the governmental Uganda Communications Commission for financial support so it can expand, Okwonga said. Last year, BOSCO won $25,000 through the prestigious FIRE (Fund for Internet Research and Development) Africa Award, to expand services and provide free internet to youth centers. Today Okwonga spends his days criss-crossing Uganda, finding new ways to extend BOSCO's reach both physically, through more radio towers, and socially, with more education and programs.

The internet that was born out of a basic need to communicate safe routes due to terror threats is still changing lives, a decade after it was introduced. "It was started to get people out of isolation, that's why it was started in the Catholic institution," said Okwonga. "And at the end of the day, the internet still helps the sustainability of the community."

[Melanie Lidman is the Middle East and Africa correspondent for Global Sisters Report. Sr. Mary Lilly Driciru is a member of the Missionary Sisters of Mary Mother of the Church, Uganda. She holds a master’s degree in social communication.]