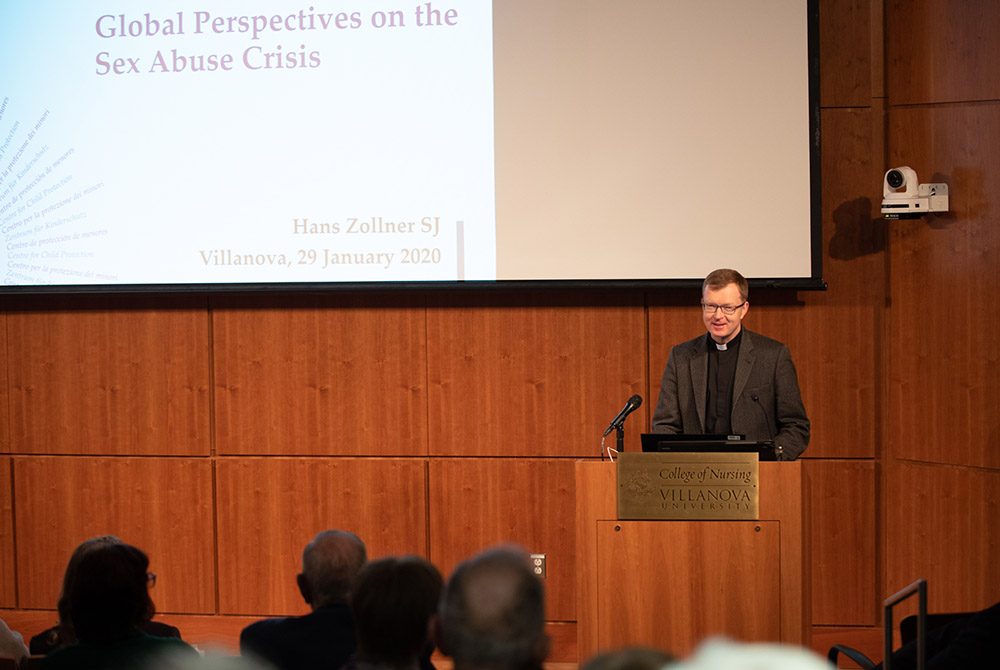 In a Jan. 29 talk at Villanova University in Pennsylvania, Jesuit Fr. Hans Zollner said that clericalism is the root cause of the damage done to the church and called out past systemic failure in reporting, punishing and stopping abuse.

"There is general mistrust and suspicion on cardinals and bishops. This is not just happening in U.S. and Australia — the level of trust on bishops is below zero. And this has devastated an institution that is built on trust and faith," he said.

Zollner, a professor of psychology and president of the Center for Child Protection, at the Pontifical Gregorian University in Rome, spoke as part of a series examining the sex abuse crisis. Zollner spoke on the situation of the church across the globe.

According to Zollner, the turning point that brought about recent reform for the church came with Pope Francis' 2018 visit to Chile. Francis threw his papacy in turmoil when he accused victims of slandering accused Bishop Juan Barros and called it "calumny."

"It created a huge uproar and criticism of the pope. But he saw the point and appointed Cardinal Charles Scicluna to look into the matter. He then apologized to the victims," said Zollner.

After the staggering story of abuse and cover-up that then emerged from Chile, all sitting bishops there offered their resignations. "For me this was the turning point. How he [Francis] looked at the abuse crisis. What's new, is the system/institution taking responsibility. This wasn't there three years ago," said Zollner.

The report from Chile underlined the systemic failures in dealing with, reporting, punishing and stopping abuse. Zollner said the clergy often thought of themselves as being above the law, while the victims found themselves without support and dealing with shame, guilt and loss of faith.

"These two — clerical attitudes and survivors' perceptions — are universally present. You can find the same attitude and reality across the globe. And yes, there are many things that are very similar from one country to another," he said.

However, the culture of clericalism has not stopped, he said. The culture of neglect, denial and rejection of survivors, coupled with the loss of confidence "are harmful for the mission and the testimony of the credibility of the church."

Zollner blamed the bishops and provincial generals for covering up crimes of perpetrators by moving them around to different parishes and schools. "This is the reality of the church." He said he was "astonished" at how one bishops' conference repeated the same mistakes the other made. "Clericalism is one of the reasons — clericalism among clerics and non-clerics."

While the image of the church is one of being "authoritarian and committed to its goal," Zollner said the church is in fact not "one big bloc." As an example, he pointed out to the opposition Francis faced among Catholic leadership here in the United States. "You can see it in your country. Few years ago, you saw an explosion of opposition against the pope and nobody intervened."

"The impression is that the pope could press the red button and all bishops in the world would salute and follow his order," he said.

Zollner said that theologians so far have not engaged with the issue of the abuse crisis, and as a result, there is little literature on the topic. "Do we have papers that reflect on the sorrow, the anger, the pain, the hopelessness of survivors, victims and their relatives? Have we found a way to express our concerns and our discomfort with this in prayer with the Lord? How often do we do pray about that and ask him to give you some advice?"

A bit more difficult to explain however, would be the bishops and priests feeling powerless at the moment. With more survivors speaking up, the clergy find themselves hugely under pressure.

"Ask any bishop or priest who are faced with these questions, and they are feeling helpless. They go through the street of Melbourne or Dublin or Lisbon, people may insult or spit at them. There is a general suspicion," said Zollner.

Many priests worldwide find themselves in this position, and as a result feel awkward being around young people. "They don't know how to behave anymore. That's maybe why 30% of candidates to the episcopacy declined being appointed bishops."

The sex abuse crisis has resulted in many in Ireland, Quebec and the Catholic pockets in Australia, losing all connection with the church. Zollner fears that it could happen "in some parts of Eastern Europe" as well.

He asked the faithful to draw inspiration from the 19th century founders of religious communities, many of whom were laypeople. "They didn't wait for Rome to solve the problem. They didn't wait until their spirituality could find a new path in a difficult situation. The church has seen difficult situations every 200 to 300 years in its history. And the solution in those moments did not come from Rome, or from the bishops."

Although the lack of accountability is entrenched in church history, Zollner said that the recent steps taken by the Vatican was a move in the right direction. From the introduction of laws and guidelines in March, the release of the apostolic letter Vos Estis Lux Mundi ("You are the light of the world"), to the abolishing of the pontifical secret in December 2019 — the church under Francis is making amends and correcting course.

Moving ahead, theologians and laypeople need to ponder on how to find a solution together, and learn how to disagree with respect. "You can introduce any law you wish, but there has to be a change in attitude," he said.