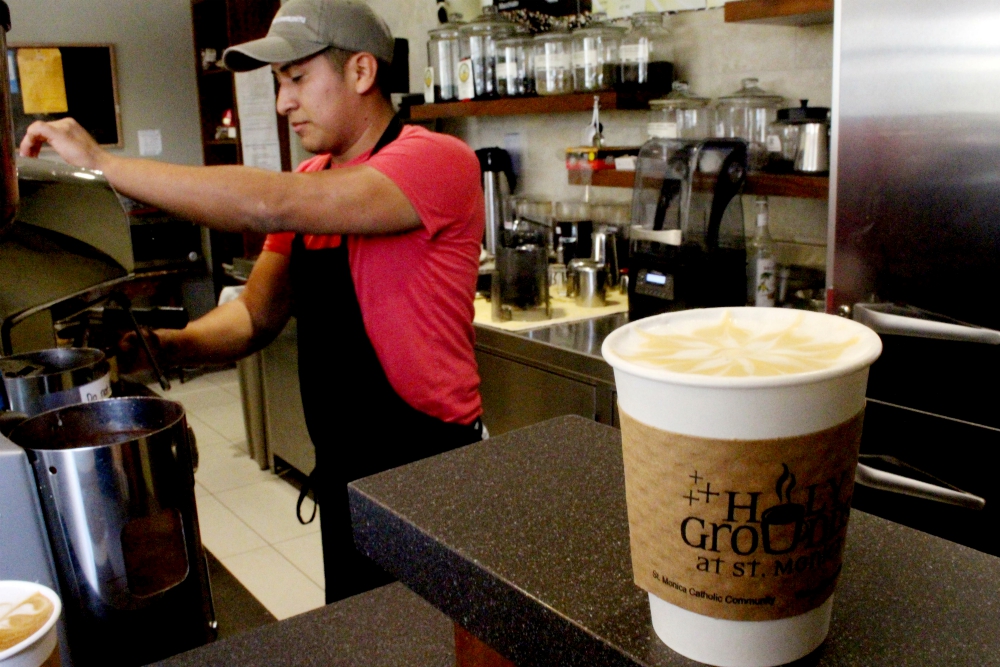 Paco Orocco, 25, creates a work of art on each coffee at Holy Grounds at St. Monica Catholic Community in Santa Monica, California. All the baristas the church hires for the café are formerly incarcerated youth — giving them a second chance. (Heather Adams)

Jimmy Valdez danced on Skid Row, dressed in wedding attire with his bride. They handed out donated food. They celebrated their marriage in a way only someone whose life was saved from the peril of addiction could celebrate. For Valdez, that salvation started with a church preaching more than just religion but service.

"We danced our first dance in the middle of San Pedro [Street] — middle of the grimy, gritty streets of Skid Row," Valdez said. "It was such a beautiful, beautiful experience to see the smiles of the people there."

Valdez, 29, grew up around violence, spent three years of his youth incarcerated and spent a majority of his 20s battling drug and alcohol addiction. He said it wasn't until he gave his life to God and got a job at Holy Grounds, a café run by St. Monica Catholic Community in the greater Los Angeles area, that he started turning his life around.

Holy Grounds in Santa Monica, California, is part of a larger trend of coffee shops being attached to and run by churches. In the Los Angeles area, there are about a dozen of these types of coffee shops, many popping up over the last few years.

But the cafés — attached to Catholic churches — tend to have a longer history.

Holy Grounds has only been open since 2013 but plans for the store started almost 15 years ago.

Merrick Siebenaler, director of marketing communications at St. Monica Catholic Community, said it isn't a coincidence that the door to the coffee shop is on the sidewalk — not inside the church. It was always part of the master plan when the parish first started talking about designs for its new building back in 2004, he said.

Although the parish had the space, making it all come together took teamwork from the congregation.

"We don't know anything about running a successful coffee retail establishment," Siebenaler said. 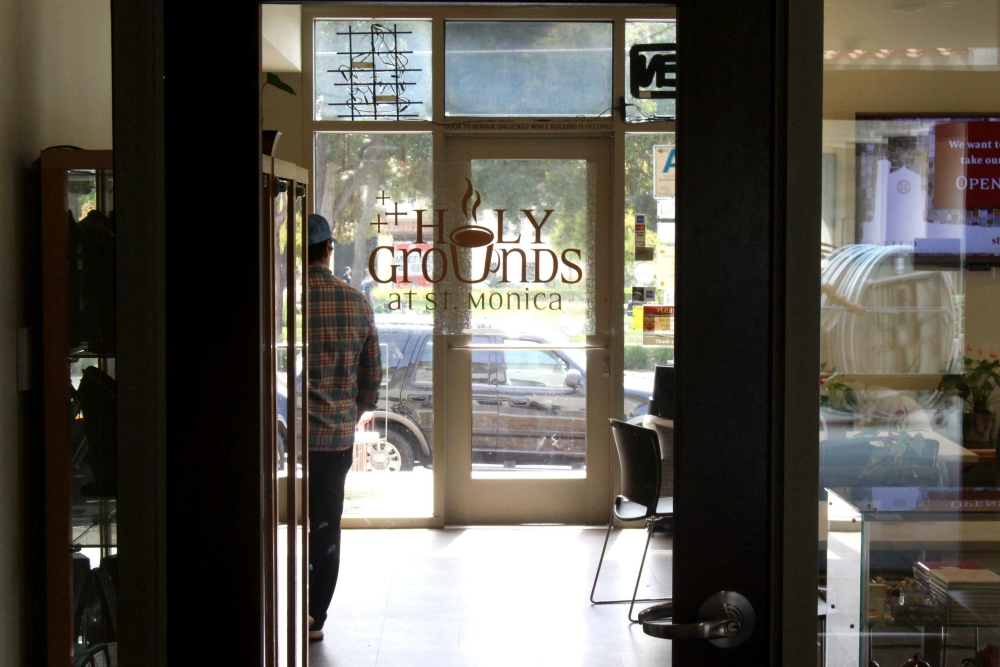 Holy Grounds is a coffee shop inside St. Monica Catholic Community in Santa Monica, California. The door to the café opens to the sidewalk, attracting customers from the community. (Heather Adams)

A couple of the church's parishioners had connections to Urth Caffe, a nearby coffee shop, which helped establish a partnership and get experienced managers.

The coffee shop is just one of 120 ministries run by St. Monica Catholic Community. They were able to use one of those ministries' connections to give formerly incarcerated youth jobs to staff the café — giving Valdez and others like him a second chance to turn things around.

Valdez said the café is unique in its positivity and uplifting conversations. He said that when he was behind the counter, he was supposed to be the one greeting people and asking them about their day, but sometimes it was the other way around.

"That's one of the best things we can do is acknowledge each other," Valdez said. "I felt acknowledged there and loved and supported."

Valdez only left Holy Grounds because he launched a successful clothing line. He is now three and a half years sober, does motivational speaking, is pursuing an acting career and has been married for almost a year.

His story is something he shares with pride, hoping to inspire others.

"I am grateful for being able to share my story," Valdez said. "A lot of my friends are either dead or in prison and the fact that I can tell my story is a huge blessing."

Beyond the employees, Siebenaler said the café has made an impact on the community, too.

He said it's been a less daunting way to invite people to the church.

"It's really kind of a conduit, an extension for them [parishioners] to do what they're already doing because they're good evangelizers," Siebenaler said.

Throughout the day, the café is filled with parents of children at St. Monica's schools, churchgoers, and teenagers. Once inside, the church hopes people will see the advertisements for events and services that encourage them to walk through the second set of doors to the church. 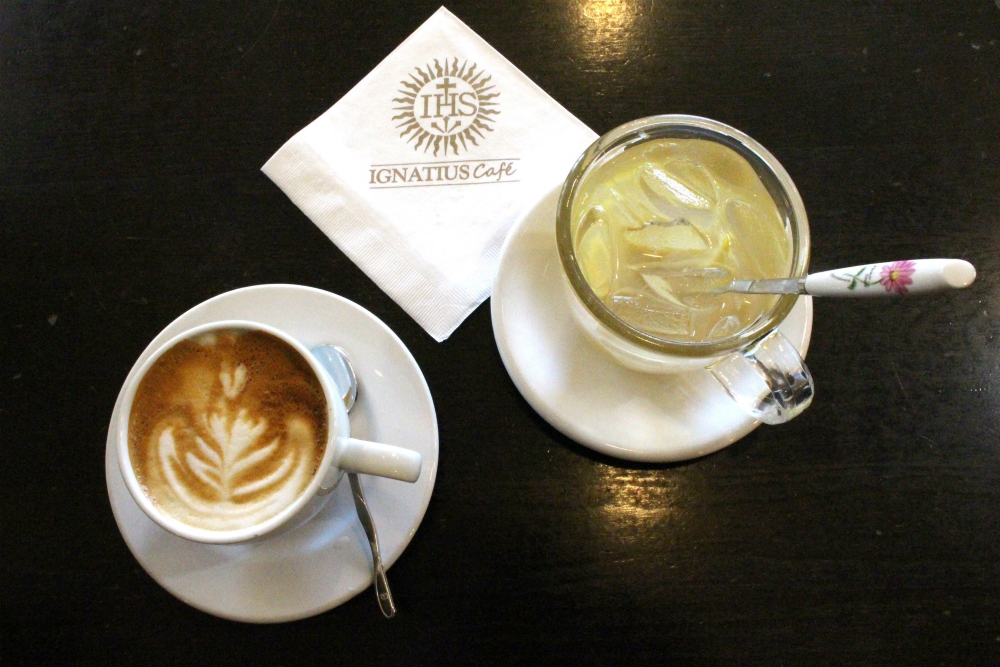 "God created all things. This means God is the God of all people. Not Christian, not Catholic," said Jesuit Fr. Robert Choi, pastor of St. Agnes. "Since God is open to all people, the church must be open to the public."

Choi said the café is like a house. The foundation of the café is "finding God in all things."

Next, four pillars — philosophy, love, theory and technique — hold up the house. Finally, the roof is the mission statement: A cup of coffee contributes to human health.

Because of this mission statement, Ignatius Café is completely run by volunteers and donates its profits to 14 charities.

Many in Southern California know Choi as the "Coffee Priest." He is an expert on coffee, grows coffee beans outside the café and hosts a four-hour class every few months to pass on his wisdom. 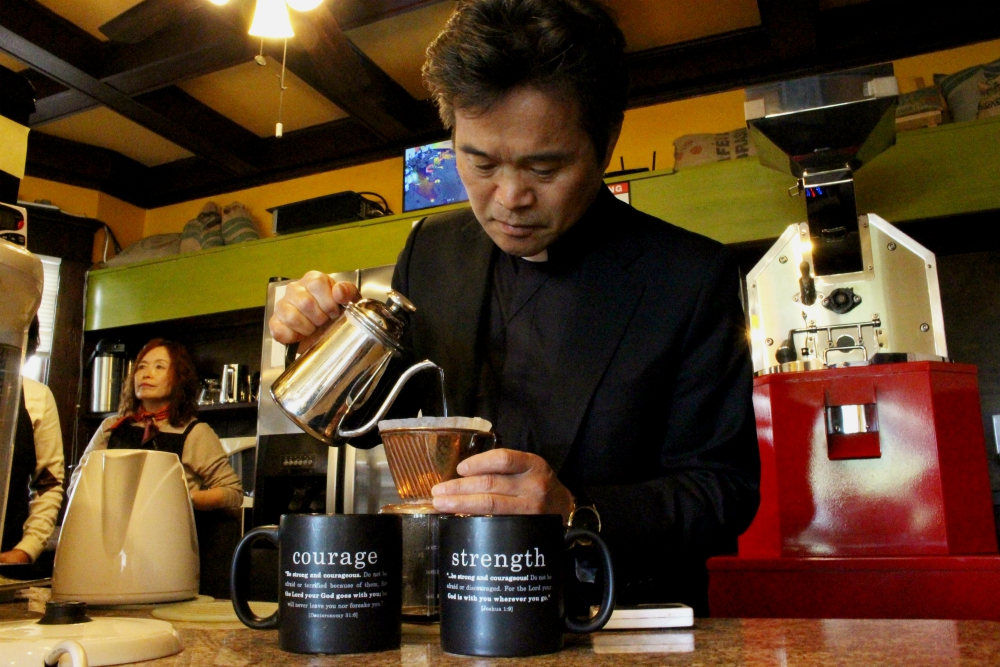 Jesuit Fr. Robert Choi, known as the "Coffee Priest," is meticulous about his coffee. He teaches a class all about coffee, including about where his beans come from and how to make the best coffee. (Heather Adams)

The class brings in a lot of people from outside the church. It covers not only the basics of coffee but also life. Afterward, attendees must past two tests to prove their knowledge before getting a certificate. Currently, the class is only given in Korean but Choi said he's working on his English because so many English speakers are interested.

"Coffee is not just coffee. Coffee is life," Choi said. "Through my coffee, I want to speak about life and what is work ethics, customer-conscious. All of these things are from Jesuit charity and Catholicism."

These types of cafés aren't known to be profitable and typically aren't meant to bring in money for the church, which means smaller locations might have trouble replicating this model.

"Our mission is spiritual, not temporal," said Eileen Bonaduce, business manager at Cathedral of Our Lady of the Angels, which has Galero Grill.

The cathedral has 1 million to 2 million visitors a year and has the downtown Los Angeles community bringing in more business for the café.

Bonaduce recognizes the cathedral's size allows it to offer unique experiences like the Galero Grill, but just like how Jesus broke bread, smaller places can do something, even if that's doughnuts or monthly dinners after Mass. 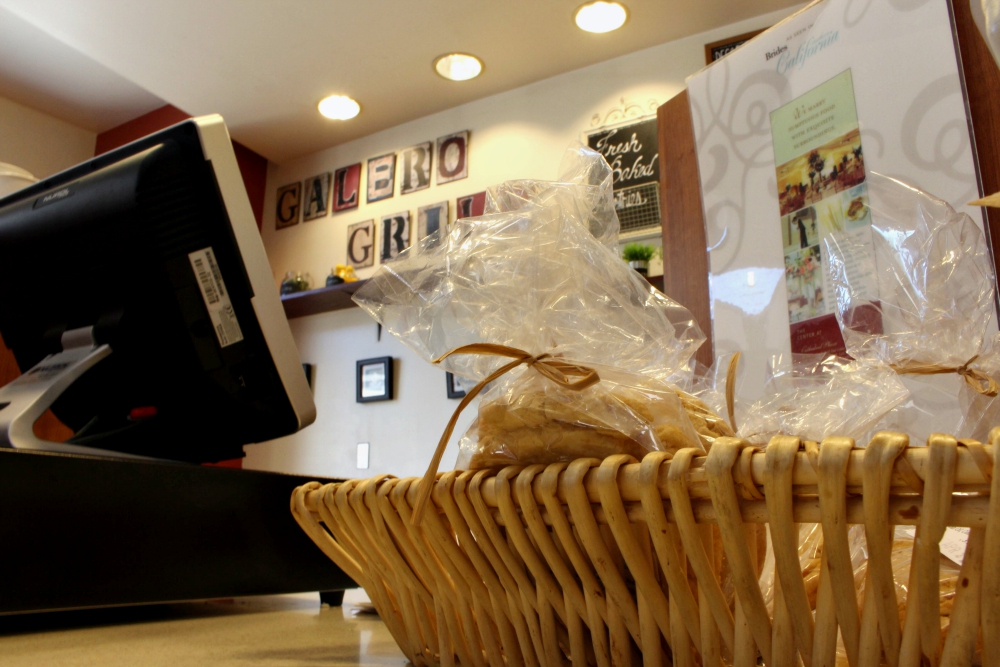 Galero Grill serves coffee and fresh baked pastries in downtown Los Angeles. Galero Grill is located on the property of Cathedral of Our Lady of the Angels and attracts workers from the downtown area, Mass attendees and others. (Heather Adams)

"I just hope that every parish is able to do something to bring people together to talk, to eat, to laugh, to just be with one another. And food is one of the best ways to do it," Bonaduce said.

Although these coffee shops aren't going to be replacing Starbucks anytime soon, they have an important place in the community.

"What we have learned is people are still craving a community, a hub, a place to call home, a place to nest," Siebenaler said. "That is still alive and well and that place can still be a church."