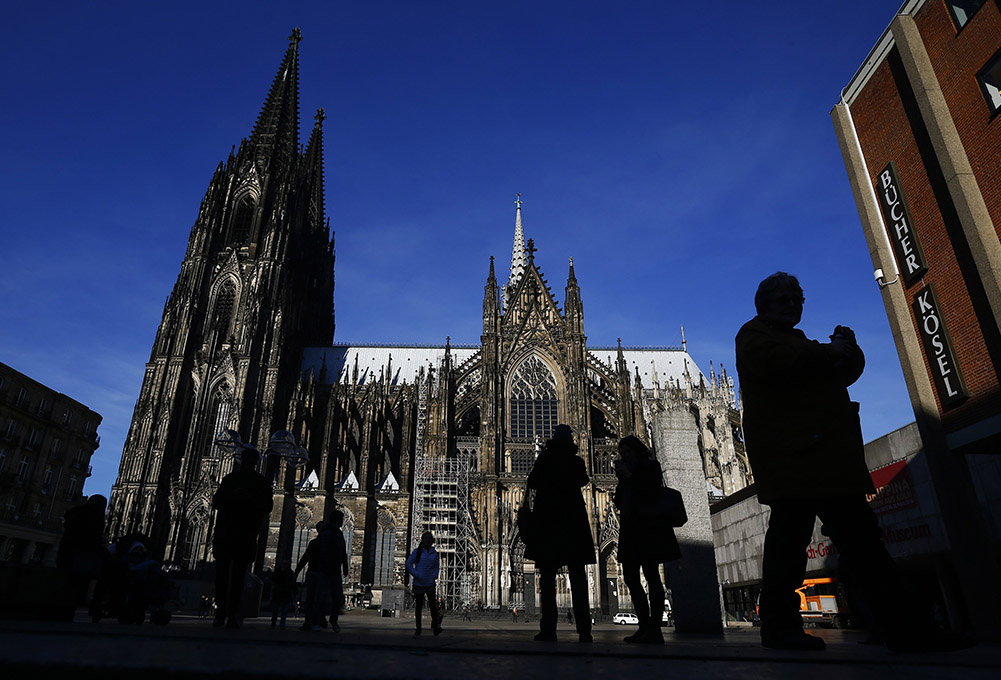 People are silhouetted against the Cologne Cathedral in Germany in 2016. (CNS/Reuters/Wolfgang Rattay)

A potentially explosive report about sexual abuse in Germany's Cologne Archdiocese is set to be released March 18.

The fate of the city's archbishop, Cardinal Rainer Maria Woelki, could be profoundly affected. He has offered to resign if he is implicated in a cover-up.

The upper echelon of the archdiocese will be targeted in the currently secret report, according to Joachim Frank, chief correspondent of the Kölner Stadt-Anzeiger, the city's largest newspaper.

"Those responsible from the diocese management who covered up cases of sexual abuse or committed violations of secular and ecclesiastical law shall be mentioned," Frank told NCR.

Peter Otten, a catechist at St. Agnes Parish in Cologne, said in an email that he expects the report will cite "the criminals behind the criminals — bishops, auxiliary bishops, vicars general, and other staff managers."

Observers of the troubled archdiocese believe there are more than 200 clergymen who have abused up to 1,000 children, according to Thomas Schüller, a canon law professor at the University of Munster. He said that, in some cases, offenders sexually assaulted up to 50 children.

According to Frank, the names of the perpetrators and their victims will be omitted from the report.

The report, commissioned by Woelki in the fall of 2018, was to have been made public last March, but Woelki blocked its release at the last minute. Compiled by lawyers in Munich, it is believed to document decades of sexual abuse by clerics and allegedly mentions persons in high positions, including friends of Woelki, although according to the terms of the independent investigation, Woelki was precluded from knowing the conclusions in advance.

The official reason given for not releasing the report was that legal clarification was needed with regard to the identification of individuals whose privacy might be violated. There are unconfirmed allegations that Woelki faced threats of legal action against him if he were to publish the report.

Delays in publishing the report have raised questions about Woelki's commitment to transparency.

"A lot of people think the cardinal was trying to hide something contained in the report done by the Munich lawyers," said Christiane Florin, religion editor at Deutschlandfunk, a German public radio station. Florin said the cardinal believes the church is made by God and should not be changed.

Among those who face cover-up allegations is the archbishop of Hamburg, Stefan Hesse, former vicar general of the Cologne Archdiocese. Hesse has denied the allegations and demands the study not be published without an explanation from his point of view.

The situation was exacerbated March 9 when a leader in the fight against sexual abuse quit his job in Cologne and left the Roman Catholic Church.

"I can no longer cope with the fact that leading church representatives are not prepared to take moral responsibility for the events in which they were personally involved," the departing executive, Oliver Vogt, told the German Catholic News Agency (KNA) wire service.

Vogt had been in the forefront of investigating cases of abuse in the Cologne Archdiocese. One of his tasks was to collect all personnel files on abusers. He has turned over roughly 236 personnel files to lawyers in Cologne. He was also responsible for developing intervention strategies in situations where priests were discovered to be engaging in inappropriate behavior.

The report's mandate was for experts to investigate, within the guidelines of the German Bishops' Conference, cases of possible sexual abuse. The head of the conference, Limburg Bishop Georg Bätzing, has called the crisis management of sexual abuse in the Cologne Archdiocese a "disaster." 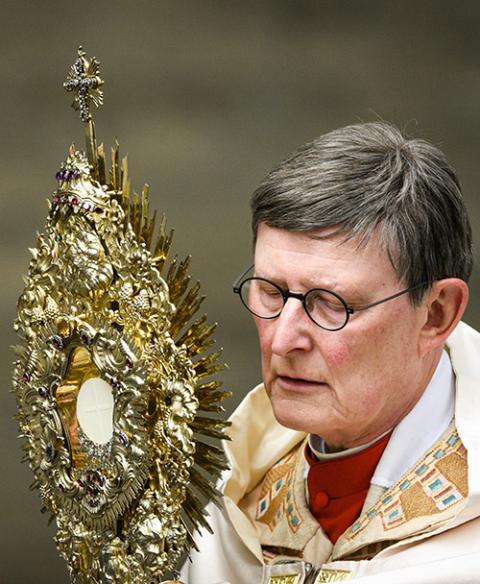 Bätzing said in February that the Catholic Church in Germany has a "scandalous image," which he attributes to Woelki's handling of communications on the subject of sexual abuse by the clergy.

Woelki, one of the few conservatives left in the German Catholic Church, admits to making errors. "We made mistakes," he has said. "We lost trust. I understand the impatience of people." However, he believes that the dominant liberals want to drive him out.

Florin, observing that German Catholics are leaving the church in record numbers, said that the cardinal has lost all credibility but doesn't see this as a consequence of the behavior of church leaders like himself. "He says he knows the truth," she said. "And if people leave the church they aren't interested in the truth."

"I think there is great disappointment with the controversy about the way the whole sexual abuse issue is being handled and the long delay in receiving the report," said Frank, also addressing the large number of people departing the church.

Such requests are expected to rise to 1,500 a month in March, April and May.

According to Cologne's 2019 statistical yearbook, that year there were 366,377 Catholics and 160,567 Protestants out of a total city population of 1,089,000, with the majority of citizens not members of any religious institution.

Otten questions the relevance of such institutions in the lives of average people. The church does not deal with people's problems, he said. It doesn't speak their language. It is not responsive to their needs. And many people do not need such an institution to have a relationship with God.

"More people will leave the church in 2021 than ever before," he said.

The district court in Cologne recently set up a hotline that people can call to register their requests to leave the church, but had to shut it down within minutes of its opening because of the high call volume, according to reporting by Tagesschau, Germany's prestigious daily TV news program.