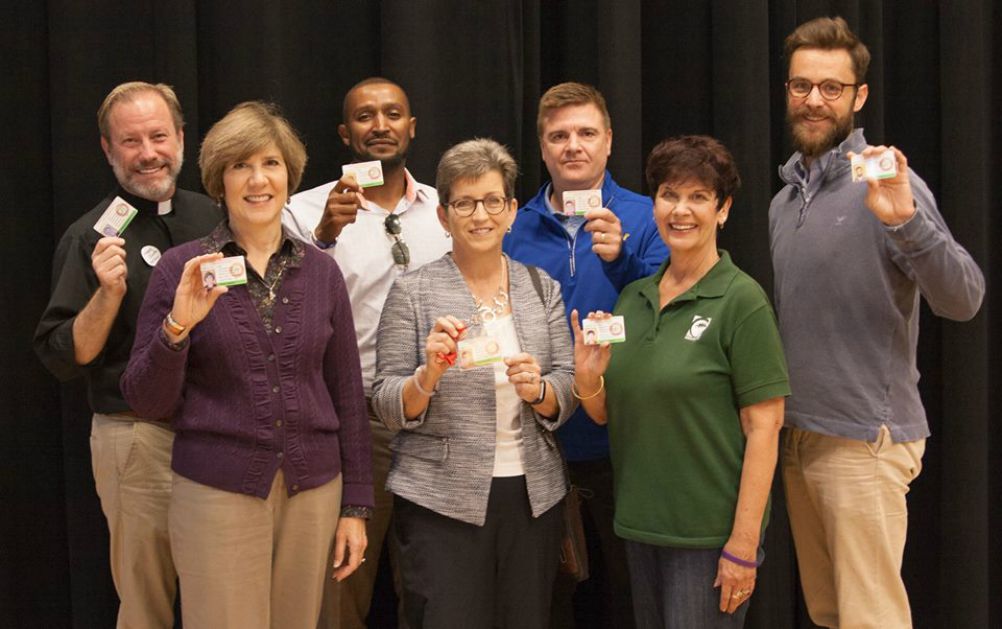 A few years ago, staff at FaithAction International House in Greensboro, North Carolina, encountered extreme reluctance and suspicion when they suggested immigrant victims of serious crimes should contact law enforcement.

"A lot of folks, much like today, had a tremendous amount of fear," said executive director Rev. David Fraccaro, a United Church of Christ minister. " 'No way,' I remember one woman saying. 'They're like sharks out to get us.' "

FaithAction's attempt to alleviate some of these fears spurred the creation of a community ID program that has spread throughout the state and the U.S. and allowed even undocumented immigrants to feel safer and more trusting in their interactions with law enforcement. 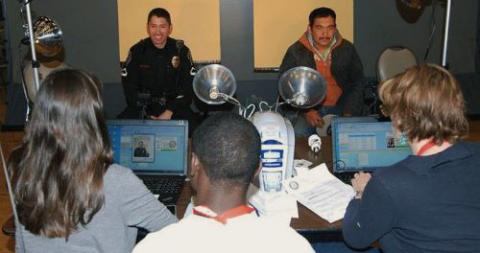 An officer from the Greensboro Police Department, left, poses for an ID photo alongside a member of the immigrant community during a FaithAction ID drive in Greensboro, North Carolina. (Courtesy FaithAction International House)

A non-profit which provides aid to immigrants and educates the larger community on the issues they face, FaithAction specializes in changing groups that fear each other from "strangers" to "neighbors."

After they realized immigrants and law enforcement officers could use some help connecting, the organization sponsored several dialogues in local houses of worship.

The conversation seemed to be moving forward, said Fraccaro, "but they got to a point where [immigrants] said, 'How are we supposed to really build trust … if you don't believe who we say we are when you pull us over?' "

That's when FaithAction stepped in with a proposal: they could create an ID that was available to anyone in the community, regardless of legal status, but that was issued after a rigorous vetting process that police could trust.

All but around a dozen states prohibit undocumented immigrants from receiving driver's licenses, although certain areas offer municipal IDs regardless of immigration status. Mexican citizens living in the U.S. can obtain identification cards with their U.S. address, known as Matricula Consular, from the nearest Mexican consulate.

FaithAction wanted something else, an ID created in cooperation with faith leaders, law enforcement and immigrants that would be accepted by police and local organizations even without government backing.

The FaithAction ID program, launched summer 2013 at St. Mary's Catholic Church, a diverse congregation a couple miles from downtown Greensboro, requires proof of identity and address similar to what a Department of Motor Vehicles asks, but with a slightly expanded list of acceptable documents.

"This is not an immigrant ID card," but rather a community ID card, Fraccaro emphasizes. While people from 60 countries have received the ID in Greensboro, U.S. citizens are second only to Mexicans in prevalence among FaithAction ID holders. The IDs are popular with homeless and elderly citizens who might not have access to other forms of ID, as well as people (including police officers) who just want to support the program.

The FaithAction ID doesn't grant any rights that the person didn't already have and doesn't affect their permission to drive, work, vote or be in the U.S. legally. It does, however, give schools, libraries, hospitals, clinics, banks and other organizations enough confidence in the person's identity and home address to ensure that they can receive services.

Perhaps most important, it also allows police to trust that immigrants and other community members are who they claim to be, and to run background checks without having to arrest and fingerprint the person — with the risk of making them subject to immigration enforcement — when it wouldn't otherwise be necessary. 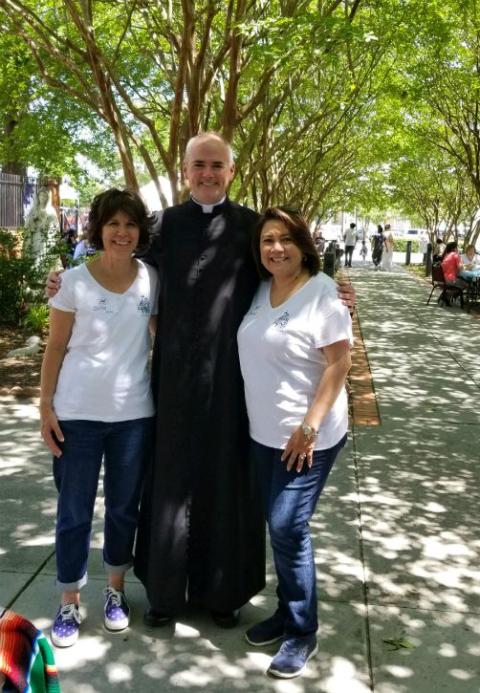 Since its beginnings, the FaithAction program has expanded, first to neighboring Burlington, North Carolina, then throughout the state and the U.S. It's now the most widely known community ID program in the country according to a Catholic Legal Immigration Network (CLINIC) factsheet. (FaithAction is a CLINIC affiliate.)

In many of those places, "people know that Catholic churches need to be a part of this conversation and in some cases the actual implementers of the programs because of the trust that they have with the community," Fraccaro said. 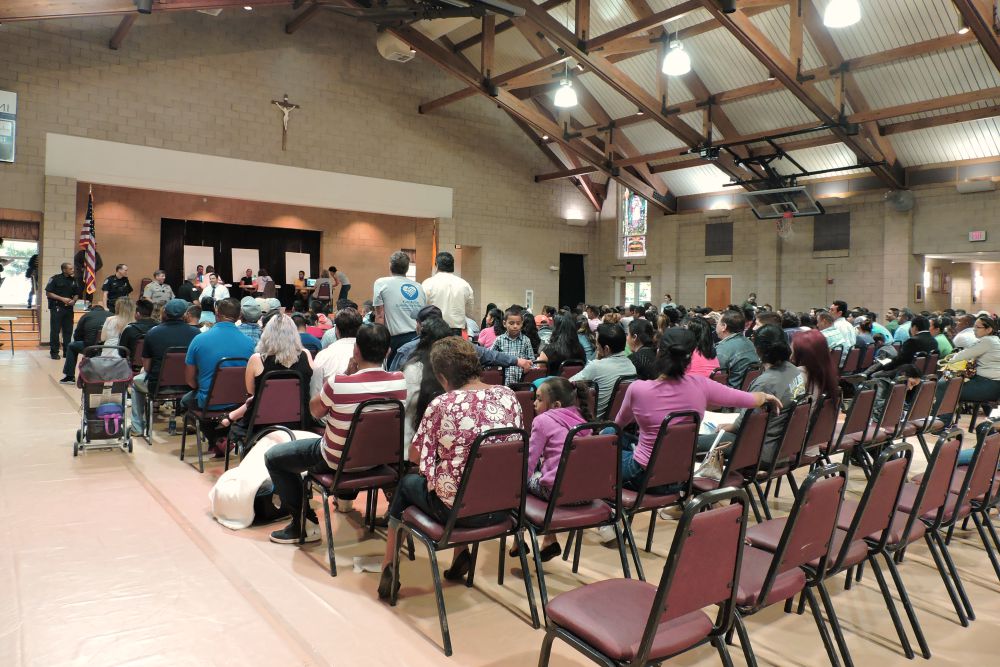 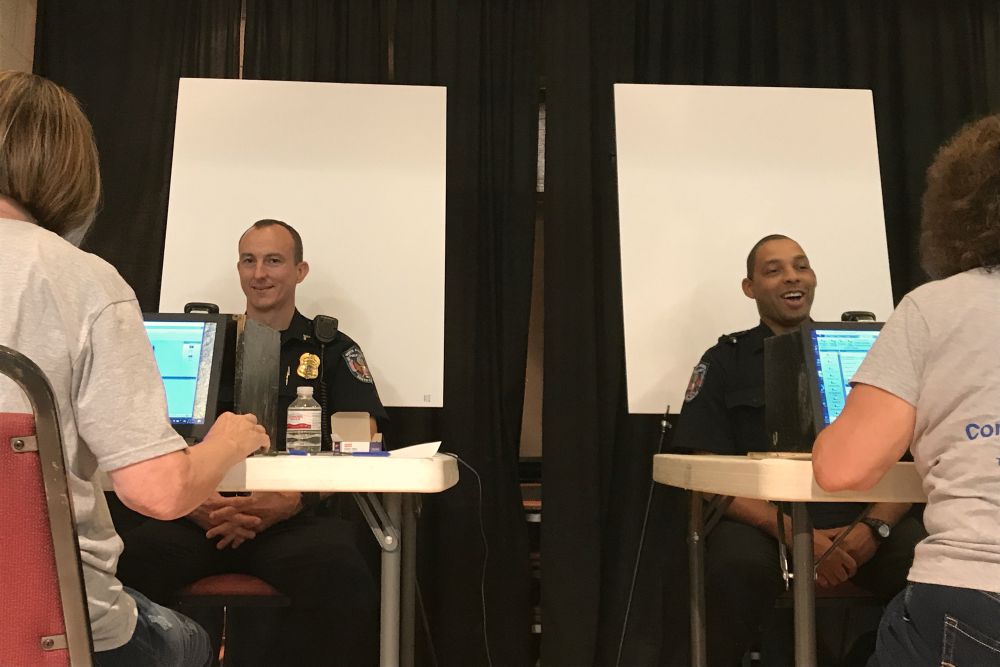 In Cincinnati, Catholic Charities of Southwestern Ohio's Su Casa Hispanic Center has partnered with the Metropolitan Area Religious Coalition of Cincinnati (MARRC) to administer the program for residents of the city and outlying areas.

Strong support from police departments was also instrumental to the program's success and growth.

During the first year of the program in Greensboro, law enforcement had people report crimes who said they wouldn't have done so without positive connections they made with officers during ID drives, and without knowing police would accept their IDs and see migrants as humans, not problems, Fraccaro said.

A hallmark of the program is the ID-drive model, which includes education on the IDs and an opportunity to connect with law enforcement, city agencies, schools, businesses and health representatives.

After the police chief expressed public support of the program, saying it made the community safer and crediting it for the resolution of serious crimes such as assault and human trafficking, other organizations were "willing to get on board as well," Fraccaro said; police are seen as experts on valid ID.

In Burlington, police Chief Jeffrey Smythe learned of the Greensboro program and reached out to Lininger, whose parish is the only Catholic church in Alamance County and the faith home of most local Hispanics, about starting a FaithAction ID. It's helped encourage other efforts to reach out to immigrants, such as a "community academy" to educate Spanish-speakers about the department, said Lt. Mark Yancy. 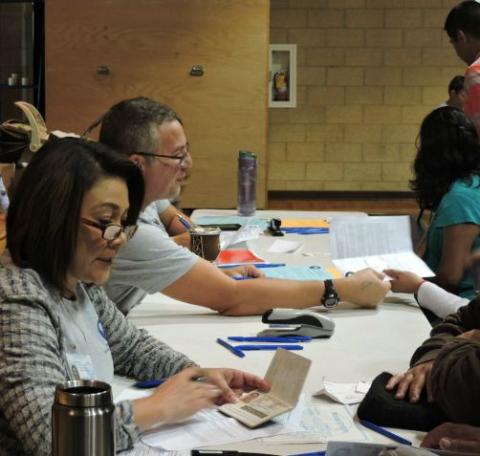 Ross said that both St. Mary's in Aiken and Our Lady of Peace parish in neighboring North Augusta had enthusiastic support from police officer parishioners who convinced their leadership to support the ID. The Our Lady of Peace parishioner was motivated by a specific experience; he had ticketed an immigrant parent for driving without a license, but he worried it might lead to an arrest warrant if they were afraid to go to court to pay the ticket.

If he'd been sure they were part of the community, he would have let them off with a warning, Ross said. Like many police officers dealing with possibly undocumented immigrants, he wanted to enforce the law, including making normal discretionary choices about when to give a warning or a ticket, without "needlessly" harming families.

Police also want people to see law enforcement not as an enemy, but as "assets and advocates" if they are victims of a crime, Ross added. She knows of at least one specific case where, due to dialogue with law enforcement at an ID drive, a woman reported domestic violence because she wasn't afraid it would get her in trouble with the law.

Support for the program isn't universal — the state of North Carolina prohibits those associated with the government, aside from law enforcement, from accepting the ID, and Lininger said even his own parishioners have a wide range of opinions on it — but those who promote it try to do so in a way that's not divisive.

The program isn't at all secretive but also isn't "in your face," said Ross. In an effort to avoid making the issue "political," those involved with the ID haven't courted media attention or asked the local government to accept or promote the ID.

But while it operates quietly and doesn't resolve root immigration issues, Fraccaro said the program is having a real impact.

When FaithAction interviewed 200 people who'd had the ID for over a year, 95% said it had been useful (especially for interactions with law enforcement and healthcare providers), and 95% said they felt "safer and consequently more willing to contact law enforcement and more a part of the community."

"It's really had the effect of truly creating, measurably, a safer, healthier, more inclusive and united community for all," Fraccaro said. "It's amazing what a little piece of plastic can do if the community is willing to come together to build it across lines of culture, faith, race, nationality and sector."

A version of this story appeared in the April 19-May 2, 2019 print issue under the headline: Community ID program builds trust between migrants and police.