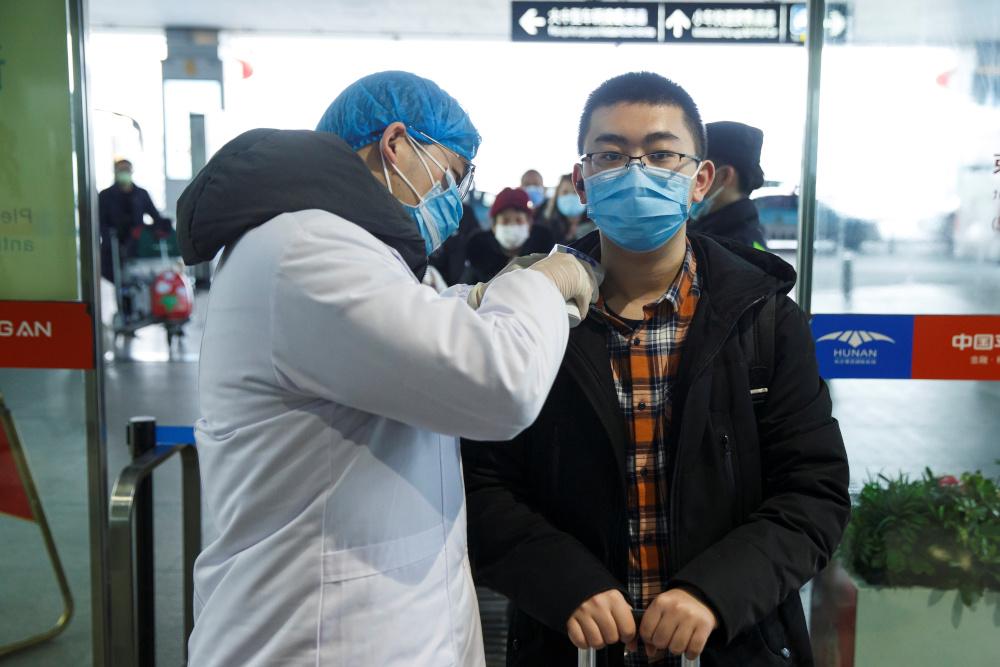 A medical official takes the body temperature of a man Jan. 27, 2020, at the departure hall of the airport in Changsha, China, as the country is hit by an outbreak of a new coronavirus. The virus has spread to almost every province in mainland China during Lunar New Year. (CNS photo/Reuters/Thomas Peter)

The Chinese respiratory coronavirus has spread to almost every province in mainland China, which extended its Spring Festival holiday by three days to delay travel by up to 500 million people.

Hong Kong, Taiwan and Thailand are the worst affected outside the mainland, and the Diocese of Hong Kong issued guidelines that included all priests and eucharistic ministers wearing surgical masks while distributing Communion.

In a Jan. 23 statement, the diocese noted the epidemic was only considered "serious."

"In the event that the epidemic is raised to the 'emergency' category, our pastoral guidelines will be revised accordingly," the statement said.

The diocese noted that hospitals had suspended day-to-day visits and said eucharistic ministers and visitors should abstain from visiting or giving Communion to sick people in hospitals. If a priest is needed for the sacrament of the sick, "he should comply with the directions of the hospital, consult the matron of the ward concerned, and wear a surgical mask. Before leaving the ward, he must wash his hands."

Diocesan guidelines included cleaning directions — including microphones used by lectors — and instructed people to bow their heads instead of shaking hands during the sign of peace.

Although Thailand is a popular destination for Chinese during the Lunar New Year, which began Jan. 25, Catholic church services in Bangkok have not been affected so far, reported ucanews.org. However, Thai authorities have increased disease-control measures at five international airports.

More than 100 people in mainland China have died from the virus, and the number has jumped each day since mid-January. The official number of infections climbed past 4,500, a rate that is now doubling daily as governments across the world mobilized to try to prevent the spread of the disease. U.S. health officials warned businesses to avoid nonessential travel to China amid fears of a substantial impact on the global economy by the epidemic.

A growing number of medical research units crunching statistic and infection rates have estimated that the number of infected people is dramatically higher than is being reported.

Researchers at London's Imperial College, led by Professor Neil Ferguson, estimated there were already 100,000 affected by the virus, reported ucanews.org.

"It is unclear at the current time whether this outbreak can be contained within China," they wrote, emphasizing that key questions remain, such as how well residents adopt recommended risk-reduction steps, how severe the disease is, and how readily people with mild cases of the disease can pass the virus to others.

The disease is not expected to peak until April or May, after which it could subside gradually.

Sixty million people were inside the quarantine zone as the whole of Hubei province was sealed off; all transport in and out of the province was suspended and roads cut off by authorities, ucanew.org reported.

In Taiwan, the government was preparing to send back more than 6,000 mainland tourists.

The epidemic has disrupted civic and religious celebrations as Chinese New Year events were canceled. Masses were canceled in Wuhan and other Hubei cities as well as in Shanghai.

Frustrated with the Hong Kong government's slowness to take action to halt visitors from the mainland, protesters exploded a bomb in a toilet at the city's Caritas Medical Centre Jan 27. It was the first of three devices exploded in public areas in 24 hours.

No one was injured at the facility, where hundreds of people were evacuated, but an online message warned "this is only the start."

A social media campaign in Hong Kong to close the border with China has been spurred by widespread anger that the city government has continued to allow high-speed rail trains to arrive in mainland China. On Jan. 28, Hong Kong — which bore the brunt of offshore infections from China during the 2002-2003 SARS epidemic, announced the trains would stop running Jan. 30.

Meanwhile, in Singapore, Catholics were asked not to attend Mass if they were showing any signs of being ill. The archdiocesan chancery issued a letter saying Communion from the chalice was suspended and the Eucharist was only to be distributed on the hand, not the tongue.

"It is not a sin to miss Mass on Sundays or holy days of obligation if one is sick," read a post on Facebook group Catholic Life Singapore, uploaded Jan 24.