Coronavirus is a new crossroads for hope, healing and repair 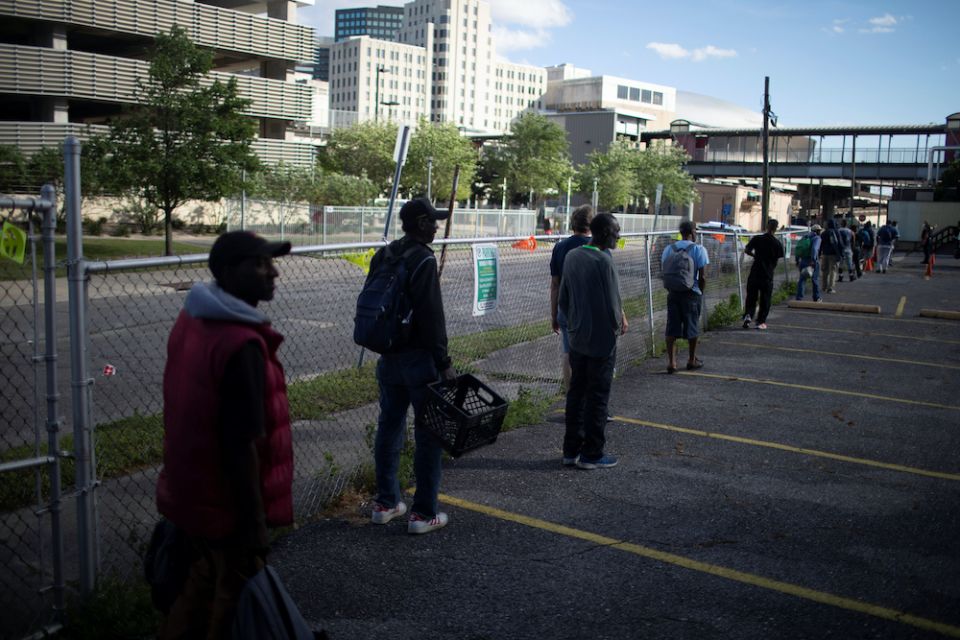 People in New Orleans practice social distancing while waiting for a meal March 31 during the coronavirus pandemic. (CNS/Reuters/Kathleen Flynn)

As the coronavirus pandemic devastates the elderly, people with disabilities, people who are incarcerated, homeless and first peoples, it cuts open — again — America's enduring wound of racial oppression.

Disproportionate rates of infection and death among African Americans lay bare continuing health inequalities and the need for the nation to heal this gaping wound through reparations.

William A. Darity Jr. and A. Kirsten Mullen compose the most compelling and comprehensive case for reparations for black Americans in their newly published From Here to Equality: Reparations for Black Americans in the Twenty-First Century (UNC Press, 2020). Their innovative roadmap for reparations begins by exploring four historical opportunities when the United States could have been dramatically altered racial inequality.

These crossroads include the formation of the republic, Civil War and Reconstruction period, the New Deal and 1960s-era civil rights legislation as times when the nation could have taken bold action to acknowledge and redress an age-old wound.

Sadly, however, at every historical juncture, rather than engaging hope and healing through repair, we have accumulated a devastating record of exacerbating what they call the "pernicious impact of white supremacy."

Coronavirus, I believe, presents the nation and the Catholic Church with the fifth historical opportunity to acknowledge, repair and find closure to this enduring legacy of oppression.

As a student of health disparities, whose partner serves as an emergency room physician, Ibram X. Kendi is deeply worried about the well-being of people of color.

The problem is that the United States does not collect or properly report comprehensive demographic data about health disparities. Kendi, who directs the Antiracist Research and Policy Center at American University, collaborated to develop the COVID Racial Data Tracker.

Kendi applauds Sen. Elizabeth Warren and Rep. Ayanna Pressley pushing the U.S. Department of Health and Human Services to publish comprehensive racial data for who has been tested or treated for COVID-19.

Available state and county data demonstrate that people of color are being hit the hardest. Consider, for example, Michigan where black Americans are 14.1% of the state's population but 40% of coronavirus deaths. In nearby Illinois, the infection rate among black Americans is twice their percentage of the state population. In Milwaukee, ProPublica found that black Americans comprise 26% of the county, but nearly half of infections and 81% of deaths as of April 3.

While many people know about the devastating impact of COVID-19 in New York, Kendi found that Orleans Parish (home to New Orleans), as of April 4, had "a staggering infection rate of 892.1 per 100,000 people" that "was higher than the infection rates of New York City, Los Angeles, and Miami combined."

As Linda Villarosa reported in The New York Times Magazine, Louisiana became one of the first states to provide COVID-19 data by race. African Americans make up 33% of Louisiana's population but 70% of the dead as of April 6. Villarosa laments the fact that U.S. racial health disparities rival the health conditions of the poorest nations on Earth. Although poverty is an exacerbating factor, U.S. racial health disparities are not erased by income and education. 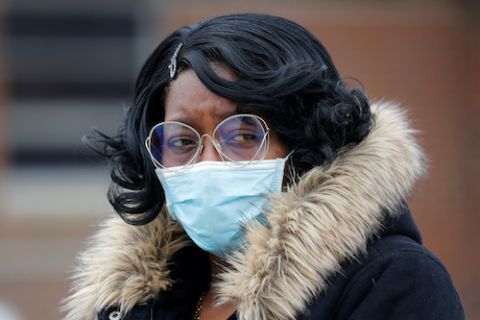 A woman stands outside the funeral of Chicago Fire Department firefighter Edward Singleton April 22 who died from COVID-19 symptoms at age 55. (CNS/Reuters/Shannon Stapleton)

The data confirm what African Americans already sensed, observes Kendi: "black Americans are overrepresented among the infected and dead. America's newest infection seems to be mating with America's original infection, reproducing not life, but death."

Kendi laments how too many white Americans, rather than seeking to understand, much less heal people suffering racial health disparities, are reproducing the inverted logic that "racism is not murderous; black people are killing themselves. To be black in America is to be suicidal."

The infuriating dynamics of white supremacy simultaneously spread the myth via national news that African Americans are immune to the disease.

Contrary to this myth, when it comes to taking action to prevent coronavirus, a recent survey by the Pew Center and Dynata found that African Americans are more likely than white people to buy nonperishable foods, hand sanitizer, cleaning products, toilet paper and bottled water. "Ironically," concludes Kendi, "the very people who call black people ignorant are ignorant about black people."

The U.S. Catholic Church has yet to fully acknowledge and redress its historical complicity in the transatlantic slave trade and its failure to become a passionate partner with and for African Americans. Roman Catholic magisterial social teaching is clear that reparation requires restoration for survivors to their condition before the injustice occurred: "reparation should erase all the consequences of the illicit action and restore things to the way they would most probably be if that action had not occurred. When restoration is not possible, reparation should be made through compensation (equivalent reparation)."

The church's magisterial teaching agrees with the declaration of the United Nations in "Responsibility of States for Internationally Wrongful Acts." Article 31 states that "the responsible state is under an obligation to make full reparation for the injury caused by the international wrongful act." It declares wrongful acts to include "any damage, material or moral."

Darity and Mullen employ similar language, stating that "restitution is the restoration of survivors to their condition before the injustice occurred or to a condition they might have attained had the injustice not taken place."

They acknowledge it is impossible to attain this goal for those who were enslaved. However, it is possible and morally necessary "to move their descendants toward a more equitable position commensurate with the status they would have attained in the absence of the injustices."

Ultimately, reparations would be demonstrably effective, Mullen and Darity argue, if there is "sharp and enduring reductions in racial disparities, particularly … racial wealth inequality" and "corresponding sharp and enduring improvements in black well-being."

Not only does the dangerous memory of Jesus Christ call the Roman Catholic Church to enact reparations, this Pentecost, we pray "Come, Holy Spirit, Come!" inviting the Spirit to heal all our wounds — especially anti-black white supremacy — that we may all thrive intimately within the heart of God's love here "on Earth as it is in heaven."

Column | Coronavirus is a new crossroads for hope, healing and repair