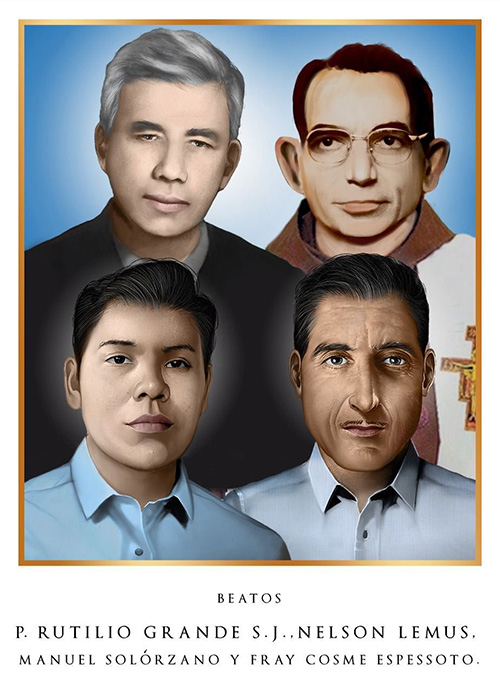 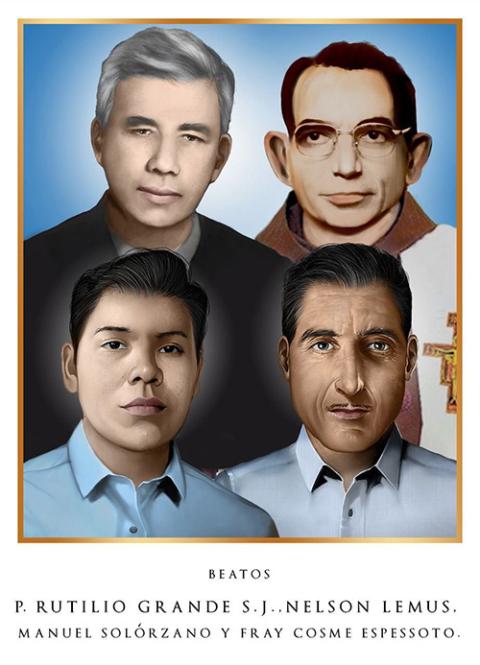 El Salvador's bishops released more details on four upcoming beatifications, but also encouraged participation at parishes throughout the country, saying the number of people allowed at the ceremony "will depend on the evolution of the coronavirus pandemic."

The announcement was made public at the end of a week in which El Salvador broke a record for COVID-19 fatalities, logging 104 deaths Oct. 3-9. It is the highest number of deaths the country has recorded in a week since the pandemic began and included the death of two Catholic priests.

The bishops encouraged Catholics to begin preparing spiritually but also to plan events in their localities or to watch the ceremony on television.

In a letter published Oct. 9, the bishops said the beatifications of Jesuit Fr. Rutilio Grande and Manuel Solórzano and Nelson Rutilio Lemus, two laymen who were traveling with the Jesuit when he was martyred in 1977, and Franciscan Fr. Cosme Spessotto, an Italian priest martyred in El Salvador in 1980, will take place Jan. 22 at 5 p.m. in front of the San Salvador cathedral. The event will be televised nationally as well as online.

The letter said the location holds special meaning because that is where, every August, Salvadorans gather to honor Christ, the country's patron, on the feast of the Transfiguration of the Lord. It's also the place where Salvadorans were fired on during St. Óscar Romero's funeral in 1980, after a bomb went off in the plaza facing the cathedral, sending mourners running in different directions.

"That's where we'll experience, in thanksgiving, the solemn proclamation of our future new blesseds, martyrs of this church that Monseñor Romero described as 'the body of Christ in history,' a tormented history stirred by a spiral of fratricidal violence that took the lives of countless innocent victims, most of them only known to God," the letter said.

The four scheduled to be beatified were martyred during the country's civil conflict in the 1970s and 1980s, when countless Catholics, following church teachings from the Second Vatican Council and the Latin American bishops' council, began speaking out in favor of the poor and those on the margins of society.

El Salvador's civil war, from 1980 to 1992, left more than 70,000 dead in the Central American nation. Among them was St. Romero, who was archbishop of San Salvador when he was fatally shot March 24, 1980, while celebrating Mass.

The war also claimed as victims four Catholic women from the U.S. — three nuns and a Maryknoll lay missionary — raped and killed in late 1980. Some have argued that the women also should be put on a path to canonization, having died in a similar fashion, but a sainthood cause has not been opened.

Referring to the four who will be beatified, the bishops said, "Each of these witnesses of faith has an original contribution to offer to the church, so that it remains faithful in its mission of, here and now, making Jesus Christ present, dead and risen."

While many have been waiting for ceremony, there's great concern over the rising COVID-19 deaths but also for the well-being of priests in the country.

In late September, Franciscan Fr. Flavian Mucci, a priest from Boston who lived in El Salvador for more than five decades and founded one of the country's largest nonprofits, died of COVID-19. Two others priests since then have died, prompting an online petition to the San Salvador Archdiocese for stricter restrictions or closure of Masses and other church gatherings until infections subside.

One of the petitions at change.org asks the government to prioritize priests to receive a dose of the Pfizer or Moderna vaccines, instead of the Chinese-made Sinovac, which most vaccinated Salvadorans have received.

El Salvador has had an aggressive vaccination campaign, administering almost 8 million doses, according to government figures, which show more than half of Salvadorans have been fully vaccinated.