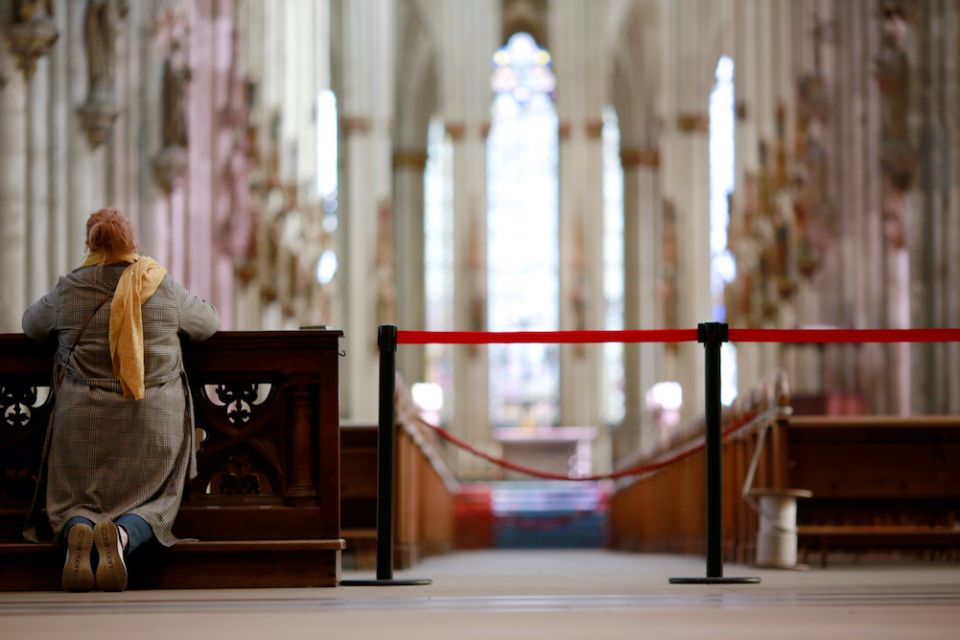 Warsaw, Poland — When Germany's Cardinal Rainer Maria Woelki celebrated his first post-lockdown Mass in Cologne's historic cathedral May 3, it marked a symbolic step towards restoring public religious practices in the wake of COVID-19.

Communion was dispensed from behind plexiglass, with singing prohibited, while details were logged of the 122 masked Catholics present for future infection tracing.

Since then, conditions have eased further, as efforts continue in Germany and across Europe to rebuild some semblance of normal church life.

"I think our government has understood and responded to religious needs," Matthias Kopp, spokesman for Germany's bishops' conference, told NCR.

"It's important the Catholic Church and other religious players in Germany have taken part in Interior Ministry meetings and had a good chance to present ideas and suggest necessary regulations. Safety concepts have since been well developed and implemented by each diocese."

German Catholics have been fortunate. The reopening of churches by mid-May was worked out carefully with the country's 15 state administrations, with detailed safety measures left to the church's 27 dioceses.

And when Cardinal Gerhard Müller, former prefect of the Vatican's Congregation for the Doctrine of the Faith, circulated a petition May 8 with the controversial Archbishop Carlo Maria Viganò and other conservatives prelates, accusing "certain forces" of using the pandemic to curb religious rights, Bishop Georg Bätzing, president of the German Bishops' Conference, noted sardonically that his church had a "fundamentally different" assessment.

The Brussels-based commission representing the European Union's Catholic bishops, known by its acronym COMECE, has called for the reopening of places of worship to be "consulted and coordinated" between churches and governments; and in most countries, that seems to have happened. 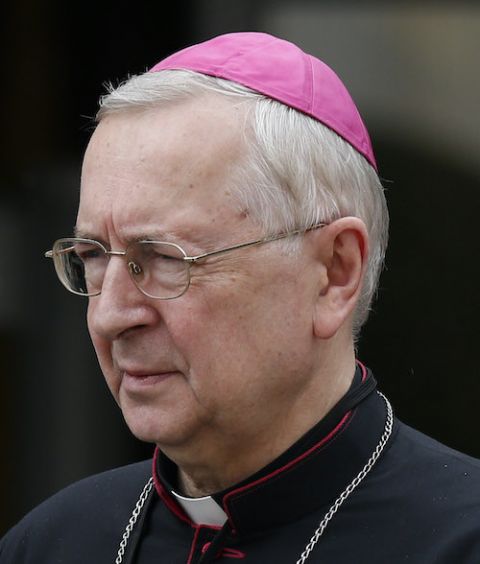 In Austria, Masses resumed nationwide May 15, with one masked churchgoer for every 10 square meters, although the bishops' conference cautioned in a pastoral letter that online services would also "remain an important part of religious life."

Meanwhile, in the neighboring Czech Republic, churches have similarly reopened, with 30 people initially allowed at Masses and all restrictions to end by June 8.

In Poland, where churches stayed open throughout the pandemic for small, symbolic congregations, a May 10 presidential election had to be called off, along with spectacular celebrations planned for St John Paul II's hundredth birthday May 18.

However, initial restrictions were relaxed to allow one worshipper for every 15 square meters, and eased further by premier Mateusz Morawiecki after a joint appeal by Catholic, Orthodox, Protestant and Muslim leaders.

In Poland and elsewhere in Eastern Europe, where traditional eucharistic practices predominate, church leaders have had to reassure Catholics they will not be profaning the sacrament by receiving it by hand.

In a May 14 message, the Polish bishops' conference president, Archbishop Stanislaw Gadecki, urged Catholics to make full use of restored pastoral services by attending church on weekdays as well as Sundays.

Preaching earlier at the national sanctuary of Jasna Gora, during a Mass rededicating the country to the Virgin Mary's protection, he warned "profound changes" would also be needed to "rebuild the homeland on something more than just a lust for endless development, consumption and pursuit of money."

Church-government relations haven't been so cooperative everywhere; and some bishops have questioned the right of civil authorities to restrict religious events, citing sensitive, long-standing conventions.

In a few instances, armed police have been photographed approaching altars to halt Masses, prompting bitter memories of persecution.

After one such incident at the St-André-de-l'Europe church in Paris April 18, Archbishop Michel Aupetit angrily recalled the long-standing police ban "on entering a church with weapons" and appealed for "cool heads."

Although the government of President Emmanuel Macron allowed schools and shops to reopen in early May, French churches were ordered to stay closed until June 2 at the earliest.

This prompted more angry reactions, with Aupetit accusing officials of showing "zero understanding of people," and the bishops' conference president, Archbishop Eric de Moulins-Beaufort of Reims, reiterating the importance of freedom of worship as "a constitutive element of democratic life."

Following a mass petition, signed by dozens of French parliamentarians, the government has indicated that some Masses might resume by Pentecost May 31, although stricter curbs could continue in Paris and other "red zones." 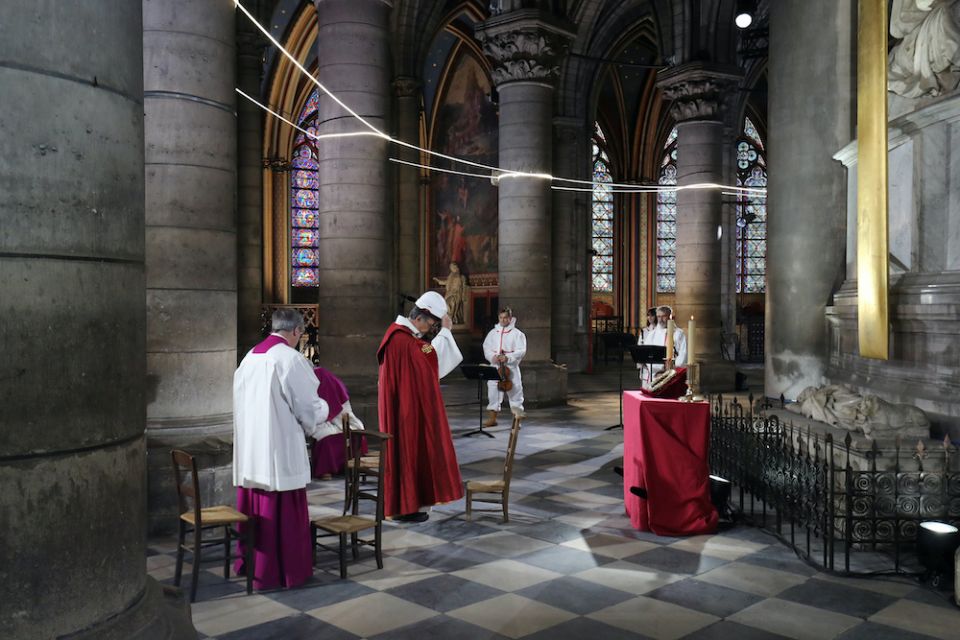 In nearby Spain, public Masses have been allowed nationwide since May 11, although these must be shortened and fill no more than a third of church seats, with no choirs, hymnbooks or holy water.

The Socialist-led government of Pedro Sánchez, in power since January, has been in conflict with the Catholic Church over its secular reforms, so some bishops are wary.

On May 10, Cardinal Antonio Cañizares of Valencia rejected "false claims" he had breached safety guidelines during a Mass for the Virgin of the Forsaken, and accused local politicians of using "manipulation and distortion" against Catholics.

Police plans to bring charges against the cardinal were backed by Valencia's Socialist regional governor, Ximo Puig, but rejected by the city mayor, who insisted no rules had been broken.

In Britain, where premier Boris Johnson ended up in intensive care with the virus after announcing a nationwide lockdown March 23, government officials indicated that churches could stay open for private prayer and funerals, as well as for clergy to broadcast services via the internet.

Many Christians were surprised when Britain's church leaders decided the government's measures were too liberal and imposed tighter restrictions of their own.

While the Catholic Church allowed priests to say Mass behind closed doors, it refused to allow lay individuals to enter churches for private prayer, arguing this would send an "utterly inconsistent message."

Heads of the established Anglican Church of England went even further, decreeing that churches should be locked to priests as well, and the dead buried with no more than a simple graveside prayer.

Hit by bitter criticisms, church leaders were disappointed when new government plans, released May 11, decreed that churches must stay closed until July, along with cinemas, pubs and other "hospitality and leisure facilities."

In its early May statement, COMECE warned against the continued forced closure of places of worship, and called on governments to ensure any restriction was proportionate and "in compliance with relevant constitutional guarantees."

"The aggressive approach of certain secularist actors against religion in the public square may have contributed to its marginalization in the current crisis," said the statement, signed by the commission's Spanish general secretary, Fr. Manuel Enrique Barrios Prieto.

But simple confusion may also be at work, such as in the Netherlands, where premier Mark Rutte announced a phased easing of the coronavirus lockdown May 6, but offered no guidelines for places of worship.

"From left to right, people understand the incomprehension of churchgoers that visits to supermarkets, residential boulevards, garden centers and markets are allowed, but not to churches," Bishop Rob Mutsaerts, an auxiliary from 's-Hertogenbosch, told the Katholiek Nieuwsblad weekly.

Given the exemplary role played by parishes and religious orders across Europe in providing aid and support for the anti-virus campaign, despite plummeting revenues and donations, some think the church deserves fuller acknowledgement.

There have been signs of a religious revival, as previously secularized citizens rethink their values and priorities. Even in skeptical Britain, one recent survey suggested 44% of adults are now praying regularly, with 56% agreeing that prayer "can change the world."

This makes it vital, Catholics say, to restore normal church life as soon as possible, and to provide spiritual guidance to anxious, fractious communities.

Although this appears to be happening, in most cases, in cooperation with governments and civil authorities, church leaders are also making their voices heard with grave warnings about the longterm effects of the COVID-19 pandemic. 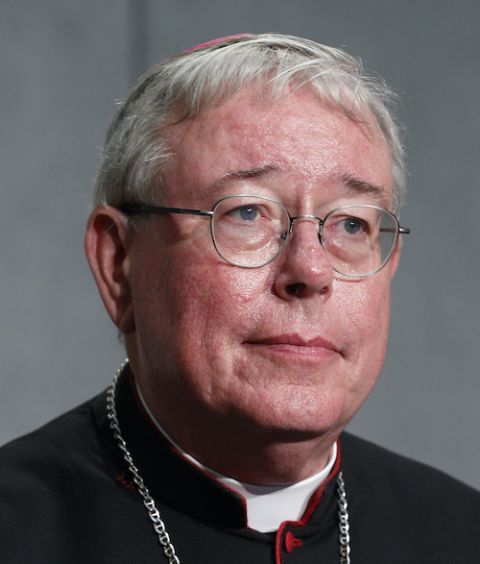 In April, COMECE president Luxembourg Cardinal Jean-Claude Hollerich, deplored the lack of coordination shown by the EU's 27 member-states, which closed their borders during the crisis, warning the whole trading bloc could be left "fatally wounded," fueling "disenchantment with the European project."

In an appeal for the May 9 Europe Day, Caritas-Europa, which has branches in 46 countries, warned of a new wave of poverty. Europe's 20 Jesuit provinces demanded "radical change," including the reassignment of military spending to health, social care and support for refugees and asylum-seekers.

"Paradoxically, it is at this time of empty churches that people are rediscovering the Christian summons," the Jesuit statement noted. "This awareness should provide a motor for change, since helping people grow in the moral virtue of solidarity forms part of the Church's mission."

As for organized religious life, there are signs of hope.

In Germany, too, church leaders have stressed the need for a smooth transition out of remaining lockdowns, and have continued to reject allegations by Müller, Viganò and others of a conspiracy against human rights and Christian civilization.

In France, the southern shrine of Lourdes reopened its gates to local pilgrims on May 16, after being closed for the first time in its 164-year history, while other Marian sanctuaries are set to readmit visitors soon.

Meanwhile, governments across the continent, concerned by accusations of violating religious rights, have pledged to consult church leaders ever more closely, with Britain announcing a joint task force on safety issues following a Catholic petition.

In Woelki's Cologne Archdiocese, public Masses, baptisms, weddings and confirmations have been possible in all parishes since early May, and new deacons are to be ordained after Corpus Christi celebrations June 11. 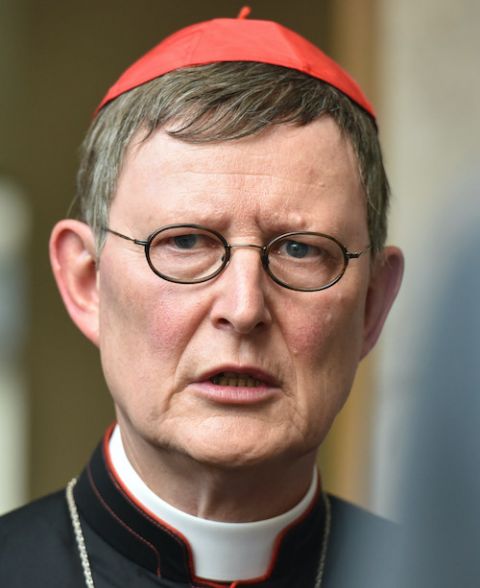 While Chancellor Angela Merkel has threatened an "emergency brake" if the death rate, relatively low in Germany, begins to rise again, there are firm hopes this won't happen.

"Most Catholics have accepted the necessity of restrictions across our church's 10,000 parishes — and though we've all suffered, especially over Easter, there've been very few criticisms," Matthias Kopp, the German bishops' conference spokesman, told NCR.

"We have excellent relations with the state, and I think these will continue after the pandemic. The restrictions have already been eased, enabling Masses and prayers in our churches — and I don't see any danger that attempts could be made to keep them in place."