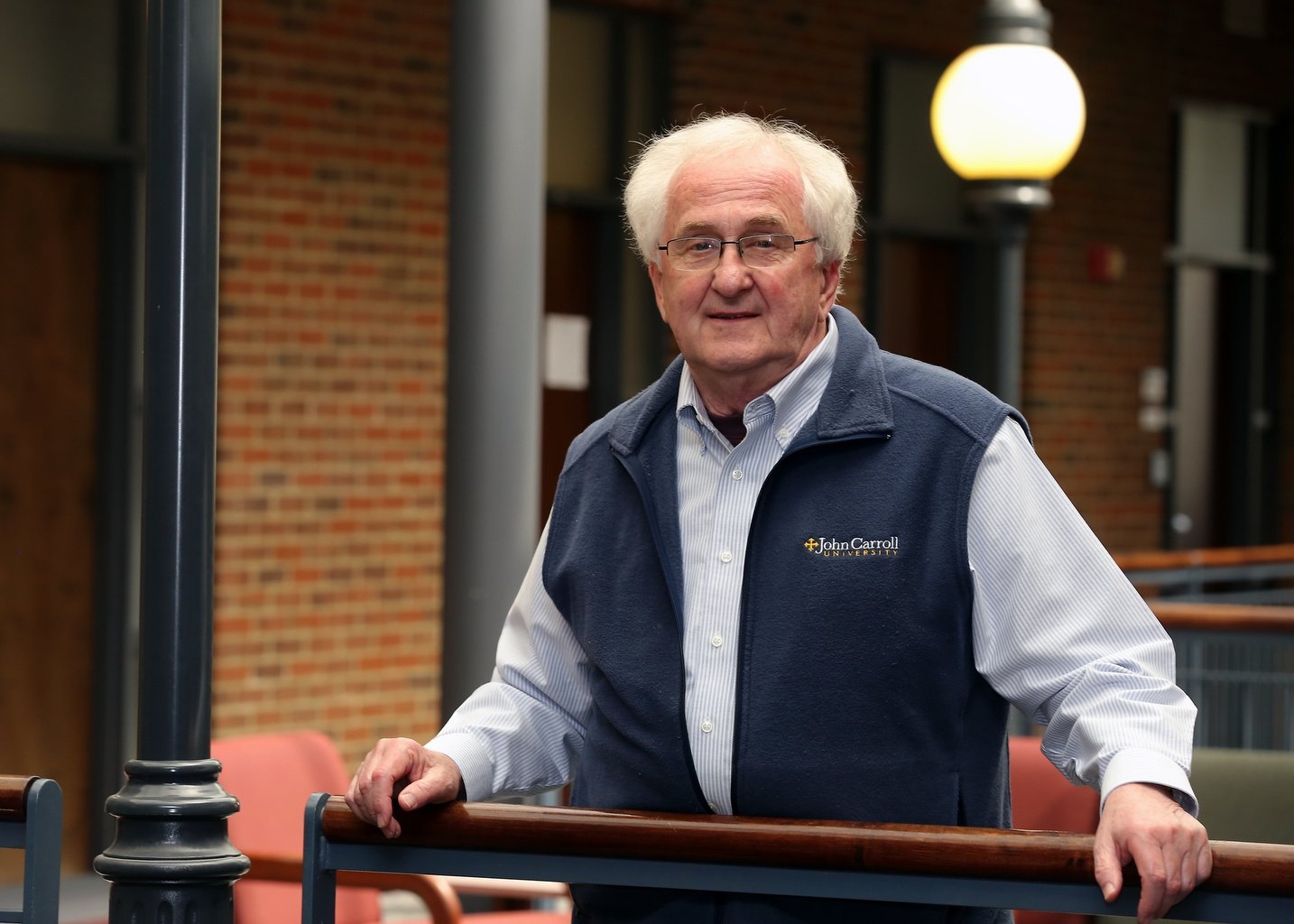 Author and lecturer Father Donald Cozzens is shown on the campus of John Carroll University in suburban Cleveland May 12, 2015. (CNS photo/William Rieter)

As an author and lecturer, Father Donald B. Cozzens, a Cleveland diocesan priest and former seminary rector, shared candid insights on the priesthood, challenging the Catholic Church to confront clericalism and renew its structure.

Despite criticism privately and publicly from fellow clergy, Father Cozzens maintained that it was his love of the priesthood that prompted his outspokenness for positive change.

Father Cozzens, 82, died Dec. 9. No cause of death was announced. Funeral arrangements were pending Dec. 10.

It was Father Cozzens' book, "The Changing Face of the Priesthood," published in 2000, that set the course for much of his life after he stepped down as president-rector of St. Mary Seminary and Graduate School of Theology in the Diocese of Cleveland a year later to focus on teaching and writing.

He spent more than 20 years tackling the issues he believed church officials needed to address including transparency in decision-making and welcoming women into a wide role in the church.

Other works included "Sacred Silence: Denial and the Crisis in the Church," "Faith That Dares to Speak," and "Freeing Celibacy," all of which focused on the issues he felt the church must openly address. Overall, he edited one book and wrote six others on the priesthood.

Father Cozzens later wrote three mystery novels that stemmed from the topics related to the priesthood and the church that he focused on in his nonfiction books, columns, essays and lectures throughout the United States and in other countries.

In a 2015 interview with Catholic News Service, Father Cozzens said his writing was intended to help people better understand the challenges facing the church and the priesthood in particular.

"I think my truth is priesthood," he said. "I'm very grateful for the grace. We priests have a front-row seat of the hidden workings of grace because people trust us. And we haven't always earned their trust. What we're doing is standing on shoulders of priests they knew years ago.

"It's such a privilege to have people trust you with struggles in their lives that they haven't told their friends about," he said.

His first novel, "Master of Ceremonies," is rooted in what he observed for more than a decade as a church insider — former rector president of a seminary, one-time vicar for clergy and religious, and counselor to priests and seminarians. It took shape soon after his 2006 book "Freeing Celibacy." In that work he maintained celibacy is a gift of the Holy Spirit given to relatively few and that it should be treasured and not legislated for priests.

After publishing "Changing Faces," Father Cozzens twice in 2002 appeared on NBC-TV's "Meet the Press" to discuss with host Tim Russert sexual abuse within the Catholic Church.

The priest recalled in an interview in 2018 with cleveland.com that reaction to the book and his TV appearances was "quite mixed."

"Some said I was hurting the priesthood and was being disloyal to my brother priests," Father Cozzens said. "But there were many people — a cardinal, bishops, priests and laity — who told me I was writing about issues that needed to be addressed."

Reporters in other media also regularly called on Father Cozzens to discuss his perspectives and insights on clergy sexual abuse, the priesthood and the church.

Edward P. Hahnenberg, professor of systematic theology at John Carroll University, said in a Dec. 10 statement that Father Cozzens "epitomized integrity as a priest, a professor and a person."

"He was courageous in his ability to address problems within the Catholic Church, but always did so in a compassionate way, driven by his love for the church and the priesthood," Hahnenberg added.

After leaving his seminary post, Father Cozzens was a resident scholar at the Institute for Ecumenical and Cultural Research at St. John's University in Collegeville, Minnesota, from 2001 to 2002. He then became a visiting professor of religious studies at John Carroll University and served as writer in residence until his retirement from the Jesuit-run school in 2016, but remained active in campus ministry for several years. He had retired from active ministry as a priest in 2009.

Born May 17, 1939, in Cleveland, Father Cozzens began studies for the priesthood in 1957. He graduated from Borromeo College of Ohio in 1961 and earned a bachelor's degree in sacred theology from The Catholic University of America before being ordained to the priesthood in the Cleveland Diocese in 1965.

Father Cozzens served in parish ministry for nine years and began his teaching career at St. Vincent-St. Mary High School in Akron, Ohio, while associate pastor of St. Vincent Church in the city. He was named diocesan director of Newman Campus Ministry in 1977, serving for four years, and joined the faculty of Ursuline College in suburban Cleveland in 1978.

At Ursuline, he was named an associate professor of psychology and religious studies in 1981. He taught there until 1989 when late Bishop Anthony M. Pilla named him vicar for clergy and religious in the Cleveland Diocese. In 1996, he was appointed president-rector of the diocesan-run St. Mary Seminary and Graduate School of Theology.