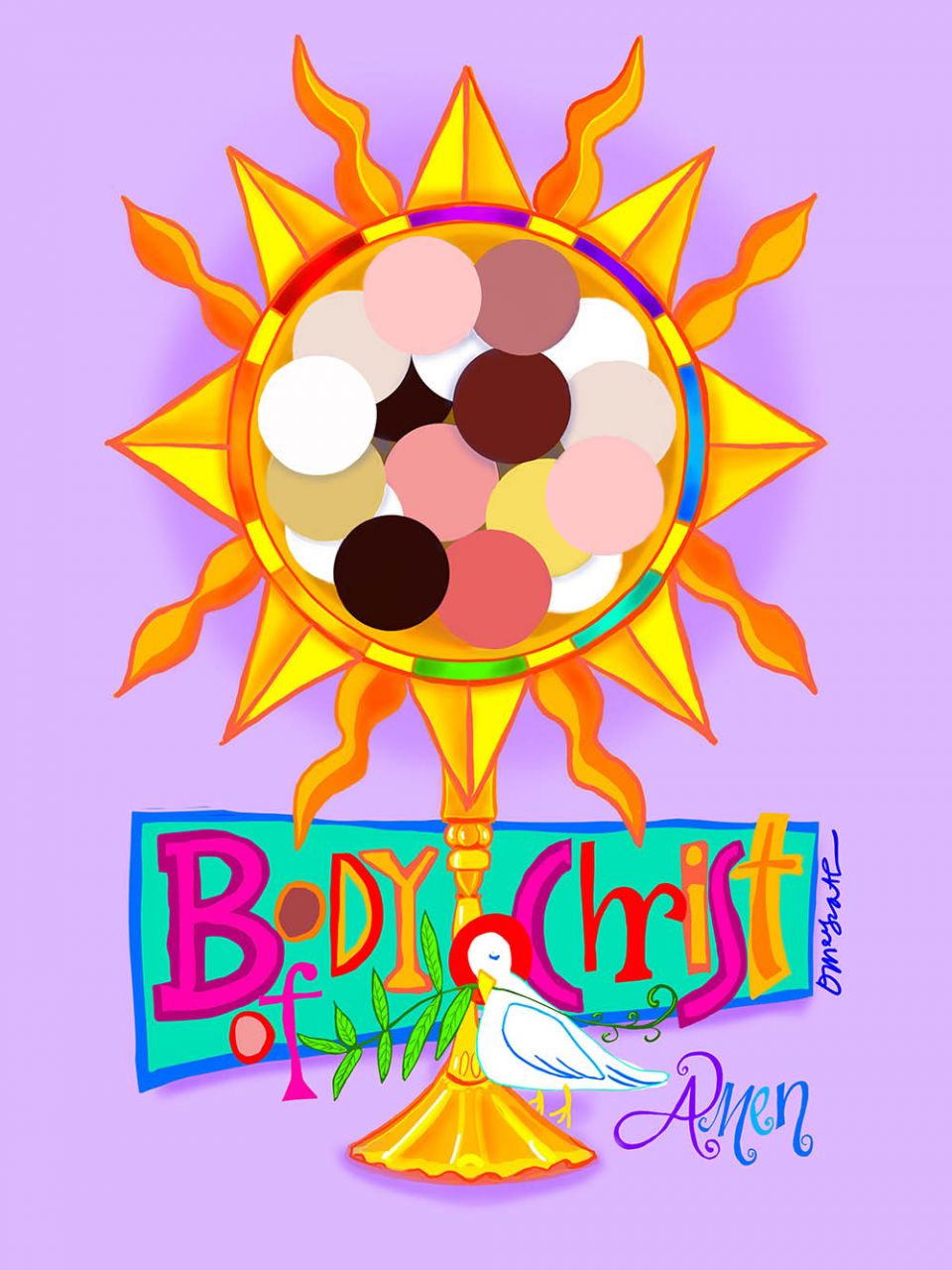 When the churches closed for public worship last year at the outset of the pandemic, we livestreamed Sunday Mass at the Cathedral of the Immaculate Conception in Camden, New Jersey, where I live in community with my fellow Oblates of St. Francis de Sales. I would bring my sketchbook to the big empty church and draw my perceptions of this odd liturgical reality, and what the sketches revealed to me was an entirely new experience and understanding of Eucharist.

I was the lector at these Masses and so it was my job at Communion time to invite the viewers at home to read along with me the prayer that appeared on their TV screens. This prayer invited the faithful-but-absent assembly to make a "spiritual communion" since they were deprived of the opportunity to receive a hands-on "sacramental communion" in church.

Every week, I found myself wondering how this "spiritual communion" business works: Can people be denied spiritual communion if they are divorced, gay or the ultimate evil trifecta: married gay Democrats? How about if they are no longer "practicing Catholics" because they don't feel welcome in "real" church? Is their "Sunday obligation" being fulfilled while they are curled up on the couch in their sweats sipping a bloody mary and belting out "All Are Welcome" at the top of their lungs? Where does holy Eucharist enter the picture?

As the months of confinement wore on, I frequently sketched the homeless folks outside my windows. The body of Christ grew bigger, deeper and way more colorful as I imagined a monstrance filled with body-of-Christ circles of bread in all the colors of human flesh, encircled by a spectrum of rainbow colors. A whole new monstrance series began to emerge along with revived awareness of just how far and wide God's body actually stretches.

One day, I discovered a quote from St. Hildegard of Bingen: "You understand so little of what is around you because you do not use all that is within you." I knew it had to be part of my new series: a yellow daisy echoing the shape of a monstrance and its sacred contents, each rooted to the earth. The same shape is repeated in the sun, the cosmic light of the world. Macrocosm connects to microcosm and our depths soar to the heights. 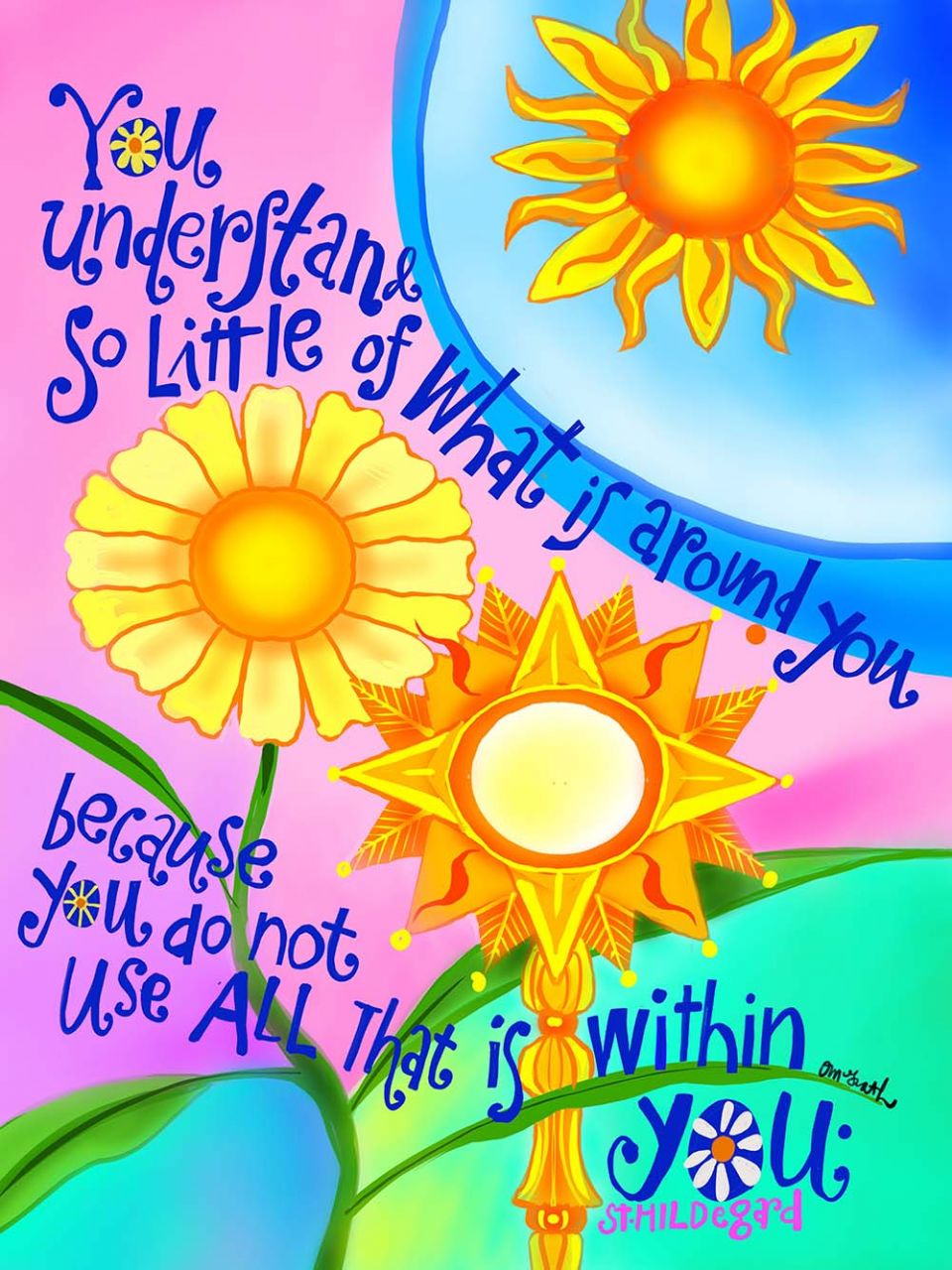 One of the more painful things I have occasionally witnessed from our porch is folks rummaging through our trash cans for food. One sunny morning, I dashed outside to stop a weathered old guy from eating a sandwich he had just gleaned from the garbage. I reached him just as he was ready to take the first bite out of a half-eaten roll with soggy lettuce streaming from the side. I wanted to cry.

I offered to make him a peanut butter and jelly sandwich and a cup of coffee instead. "I can't eat peanuts," he said, "and I don't drink coffee. If you give me a dollar, I can get a sandwich at McDonald's."

As providence would have it, I had exactly one dollar bill in the pocket of my old worn sweats. Off he went for a McMuffin and I returned to my porch, grateful that I was able to provide Christ with a little breakfast. 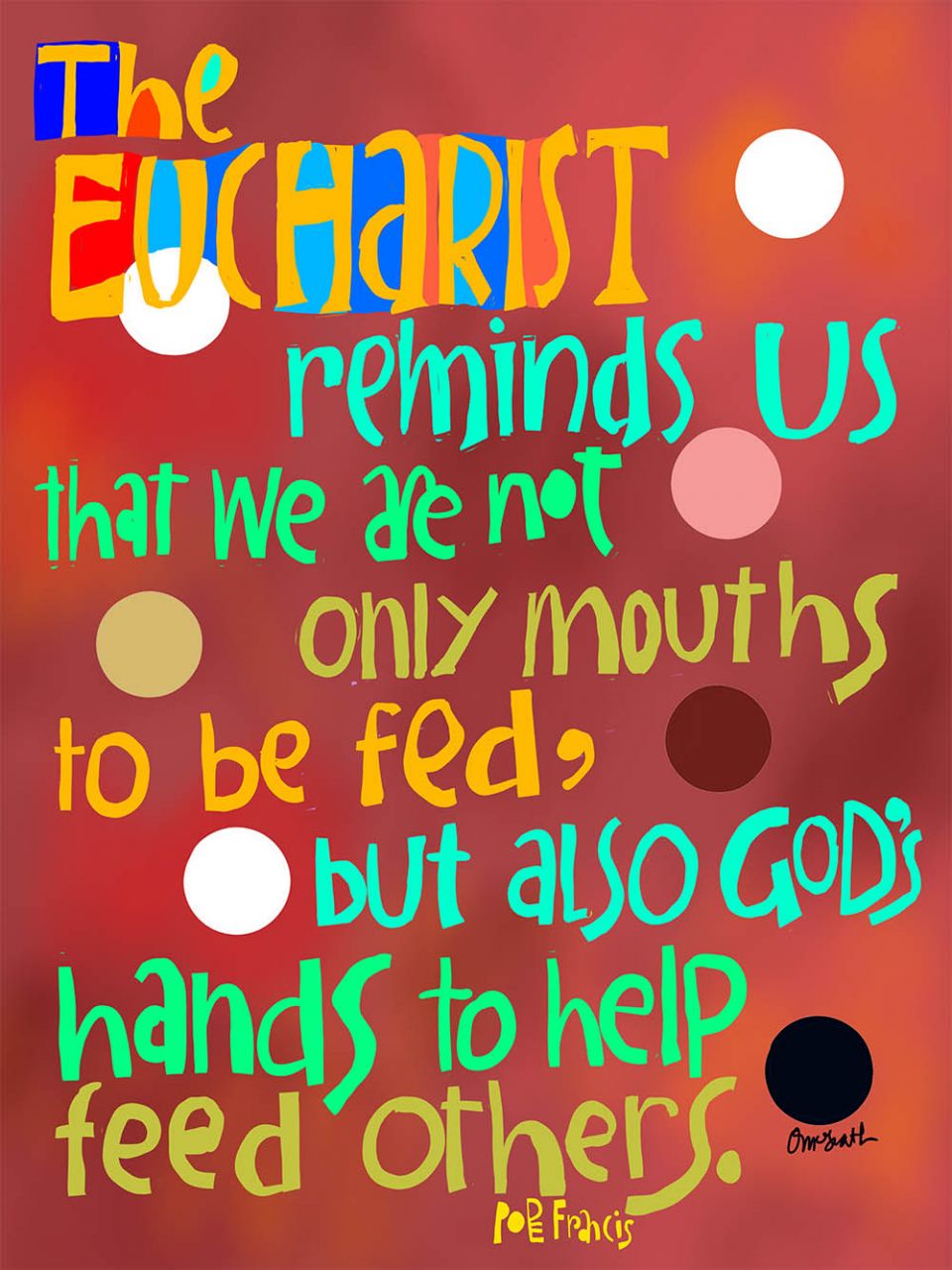 I knew that whatever concerns and anxieties awaited me that day would be nothing compared to seeking my next meal in a garbage can. I was blessed to receive the holiest of Eucharists because a living monstrance appeared on our sidewalk in the form of a hungry old man with a peanut allergy. The holiness I felt deep within didn't come from my having performed a good deed, it came because the body of Christ stopped to visit me in a most special Spiritual Communion and I said "Amen." 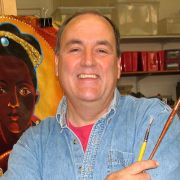 Br. Mickey McGrath, an Oblate of St. Francis de Sales, is an artist, author, retreat director, and art and faith tour guide. He lives and works in Camden, New Jersey.

Perspective | Finding the body of Christ in different 'spiritual communions'