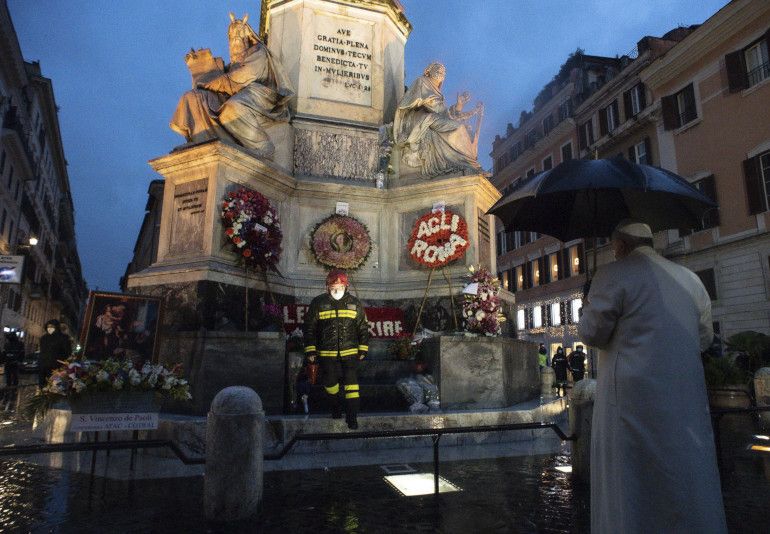 Vatican City — Pope Francis on Dec. 8 decreed a special year dedicated to St. Joseph for the global Catholic Church, offering the 1.2 billion members of the faith an opportunity to obtain indulgences as the world continues to undergo the "grave tribulation" of the coronavirus pandemic.

The special year, coinciding with the 150th anniversary of the 1870 naming of St. Joseph as patron of the universal church, will run through Dec. 8, 2021. Francis announced the move with an unexpected decree from the Vatican's apostolic penitentiary, which was accompanied by a letter from the pontiff.

In the papal letter, titled Patris Corde ("With a Father's Heart"), Francis says he had been thinking about the move for some time but his desire to decree the special year "increased" as the pandemic unfolded. The pope compares Joseph, Jesus' foster father, to the many unheralded essential workers keeping society afloat in times of social distancing and remote work.

"Each of us can discover in Joseph — the man who goes unnoticed, a daily, discreet and hidden presence — an intercessor, a support and a guide in times of trouble," writes the pontiff. "Saint Joseph reminds us that those who appear hidden or in the shadows can play an incomparable role in the history of salvation."

The decree from the apostolic penitentiary offers a plenary indulgence to Catholics who choose to take part in the special year in one of six outlined ways. Although such Catholics are obliged, as usual, to also make a confession, receive the Eucharist, and pray for the pope's intentions, the decree recognizes that some will be unable to do so in line with pandemic social distancing measures.

"In the current context of the health emergency, the gift of the plenary indulgence is particularly extended to the elderly, the sick, those close to death and all those who for legitimate reasons find it impossible to leave their homes," the decree states, suggesting such persons can obtain the indulgence by having an intention to fulfill the requirements "as soon as its possible."

The six ways Catholics can celebrate the year include:

Earlier in the coronavirus pandemic, Francis had previously announced the offering of special plenary indulgences to any Catholic affected by the virus, to healthcare workers and their families, to those who pray for the end of the epidemic, and to those who die without being able to receive final rites.

Theologians told NCR that the earlier decree, announced March 20, showed a seemingly unprecedented level of pastoral care for those who suffer from the virus.

Francis' new letter describes Joseph as a father who was beloved, tender, obedient to God, accepting, "creatively courageous," a hard-worker and "in the shadows."

The pontiff also notes that the saint is traditionally described as a carpenter, "who earned an honest living to provide for his family."

"Saint Joseph's work reminds us that God himself, in becoming man, did not disdain work," states Francis.

"The loss of employment that affects so many of our brothers and sisters, and has increased as a result of the Covid-19 pandemic, should serve as a summons to review our priorities," the pope continues. "Let us implore Saint Joseph the Worker to help us find ways to express our firm conviction that no young person, no person at all, no family should be without work!"

Coronavirus likely to cause first year without papal travel since 1979