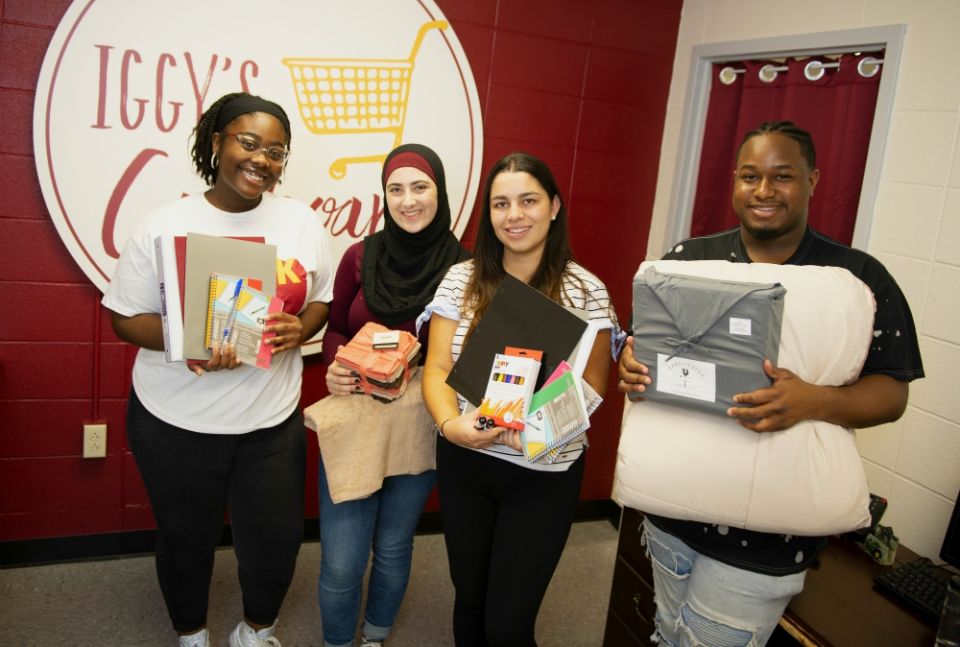 Students volunteer at Iggy's Cupboard, which is dedicated to providing meals to students, faculty and staff struggling with food insecurity at Loyola University New Orleans. (Courtesy of Loyola University)

As the cost of higher education in the United States rises, more students are going hungry. And as dorms close in response to the coronavirus, colleges are responding by keeping food options open.

Food insecurity has become a cause of concern among college students. According to the College & University Food Bank Alliance, 30% of university students in America are food insecure, defined as limited or uncertain access to food, due to lack of money and other resources.

The students of Loyola University in New Orleans have come up with a solution.

Iggy's Cupboard, a food resource on campus, is dedicated to providing meals to students, faculty and staff struggling with food insecurity. Operated by Loyola's Student Life and Ministry Office and the Student Government Association, the initiative began when students reported food insecurity in a campuswide survey back in the fall of 2017.

"And not only our students, but some of our faculty and staff also reported food insecurity," said Alicia Bourque, executive director of the Student Affairs Office.

On March 12, Loyola University decided to move classes online for the spring semester to contain the spread of COVID-19. Students were encouraged to move out of their dorms and head back home. Online classes began March 16.

Loyola is taking into consideration students who don't have affordable, safe housing options and have nowhere to go. For them, food services remain open. Since any gathering is not recommended, students will be provided with boxed meals three times a day, for the rest of the semester.

With the Loyola campus located in uptown New Orleans, there aren't many accessible and affordable grocery stores around. "So, this fits right into what we saw as an expressed need — a necessity for them to be able to have food on the table," said Heather Malveaux, director of social justice and immersion programs for the Office of Student Life and Ministry.

"It's easy for them to either forget to eat or choose not to eat because they don't have the money or they can't afford the options on campus — we work hard to keep things affordable. Sometimes they just need a little bit of extra help," she said.

Rana Thabata, a political science and economics student, has been involved in the initiative since its inception. A commuter student, Thabata heard friends during her freshman year confess to being food insecure. "I always knew food insecurity was a problem on campus. My friends told me they couldn't afford to eat and sometimes they would beg other students to swipe them in to the dining hall," she said. 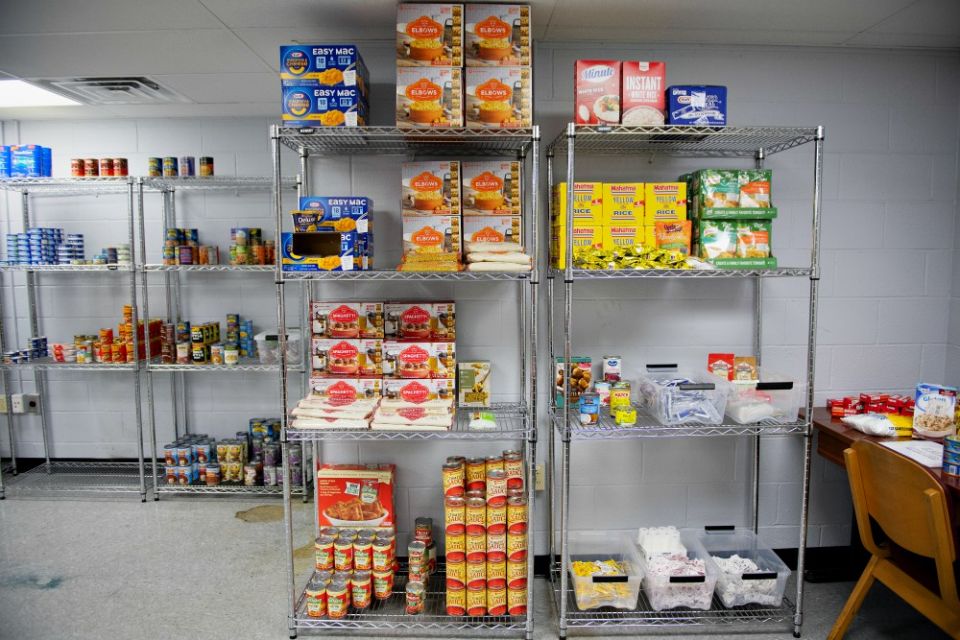 Named after St. Ignatius of Loyola, Iggy's Cupboard offers 1,000 meals per academic year. Over the last year, it gave out more than 2,300 pounds of food and hygiene products. (Courtesy of Loyola University)

Malveaux said that a number of Loyola students have also tried to apply for food stamps, but were either found ineligible or didn't know how to go through the process. It then made sense to provide for these students, from a perspective of social and food justice.

Iggy's Cupboard began in the fall of 2018, in the community theater box office on campus. It started as a small operation and has grown exponentially. It shifted to a new location at the student center, to make it accessible and private for users. Iggy's Cupboard has a reception desk. In the event it is not staffed, "shoppers" can gain access through a key that they can check out at the front desk of the Student Life and Ministry Office.

Users are offered complete anonymity — they're not asked to provide a name, but instead are asked if they are student, staff or faculty. This was a conscious effort made to remove stigma surrounding food insecurity and preserve the dignity of those in need.

"We wanted to be very intentional to not call it a 'pantry'. It was also a big complaint with the previous location as people felt it did not offer them any anonymity," said Malveaux.

Students who offer to volunteer are trained in cultural competence and confidentiality. 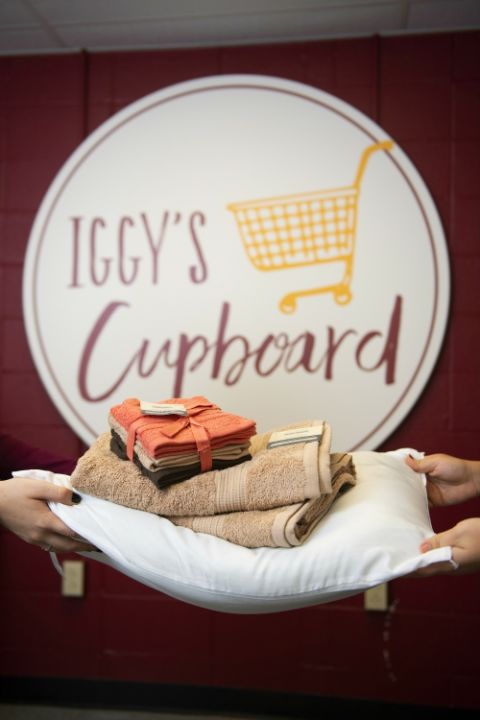 Iggy's Cupboard shoppers are offered complete anonymity, in a conscious effort made to remove stigma and preserve the dignity of those in need. (Courtesy of Loyola University)

To keep Iggy's Cupboard stocked, the Student Government Association donates a couple thousand dollars per year and helps in donation drives through the spring and fall semester. Students going home for Thanksgiving break donate their meal plans or "wolfbucks" — which are dining dollars — to be used at various dining locations on campus.

"Students also donate wolfbucks as part of their Lenten sacrifice. And we use that to either stock the pantry or give them as meal plans," said Bourque.

"We also get many donations from Amazon wish list that we are able to give out food kits for students during fall break, Thanksgiving break or Mardi Gras break," said Malveaux.

Loyola president, Tania Tetlow, is proud of this student initiative, which she considers "magic." The students "decided that they really wanted to own the issue themselves," she said. "And it became the ultimate teachable moment and it really helped affirm the special quality of this community."

The initiative, according to Tetlow, is also reflective of Catholic values. Since students in Loyola come from different class backgrounds and many are first-generation college students, Tetlow said that the university is committed to "making sure that we get students the assistance they need to be able to afford tuition and books, but also food without having to work so many jobs that it makes it very difficult for them to succeed academically."

Currently, Iggy's Cupboard offers 1,000 meals per academic year. Over the last year, it gave out more than 2,300 pounds of food and hygiene products. The beginning of this academic year saw 1,171 visitors. "We now have sponsorship for comforters and school supplies. We also have kitchen appliances in there," said Thabata.

Iggy's Cupboard is now the talk of the campus, with some students even running for student government elections on the promise of increase funding for the initiative.

Plans of an expansion are in the works with students discussing "Iggy's Wardrobe" — a way to get professional clothes to students who need it for interviews and internships.

A version of this story appeared in the May 15-28, 2020 print issue under the headline: Iggy's Cupboard combats food insecurity on campus .