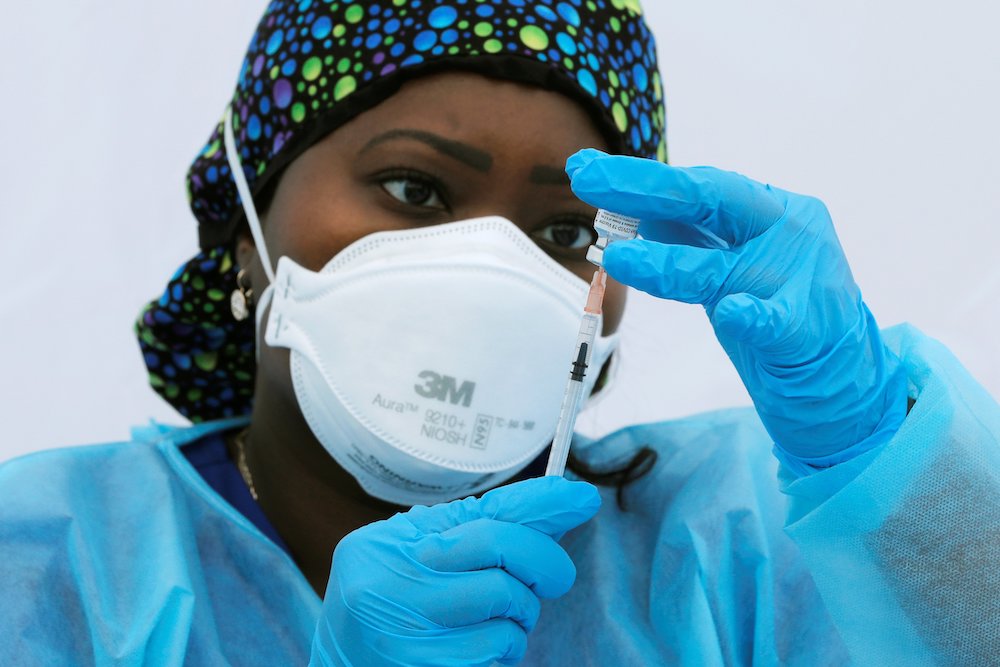 Registered nurse Sheba Phillip prepares a syringe with a dose of the Pfizer-BioNTech COVID-19 vaccine during a vaccination event for local adolescents and adults outside the Bronx Writing Academy school June 4 in New York City. (CNS/Reuters/Mike Segar)

As some Catholics are seeking a religious exemption to the coronavirus vaccine mandates that are becoming more common in workplaces and even some public venues, priests in the Archdiocese of New York have been advised not to get involved in that process.

"There is no basis for a priest to issue a religious exemption to the vaccine," said a memo sent to priests in the New York Archdiocese July 30. An image of the memo was published by a news correspondent on social media two days after it was issued.

An archdiocesan spokesman confirmed with Catholic News Service that this communication was accurate and was sent by Msgr. Joseph LaMorte, archdiocesan vicar general, and John Cahill, archdiocesan chancellor.

The memo not only advised priests not to be involved in issuing religious exemptions but stressed that if they did issue them they would be "acting in contradiction to the directives of the pope" and "participating in an act that could have serious consequences to others."

The archdiocesan leaders wrote that they "occasionally hear from Catholics who have a sincere moral objection to the COVID-19 vaccines due to their connection to abortion. This concern is particularly acute among people who are strongly pro-life and very loyal to the teaching of the faith. It is a serious issue for some people who often seek guidance and support from the church."

They said New York Cardinal Timothy Dolan had suggested that "clarity be provided to assist our priests in response to requests of this nature which they are receiving."

The memo distinguished individual vaccine decisions from getting backing by one's parish priest on this issue, stressing that "any individual is free to exercise discretion on getting the vaccine based upon his or her own beliefs without seeking the inaccurate portrayal of church instructions."

"Our priests should not be active participants to such actions," it said.

It also echoed what church leaders have said about the COVID-19 vaccine, noting: "Pope Francis has made it very clear that it is morally acceptable to take any of the vaccines and said we have the moral responsibility to get vaccinated. Cardinal Dolan has said the same."

The direction for New York's archdiocesan priests comes just days before New York's Mayor Bill de Blasio announced that New York City would be the first U.S. city to require proof of at least one dose of a coronavirus vaccine for most indoor events, effective Aug. 16.

"If you want to participate in our society fully, you've got to get vaccinated. It's time," he said during an Aug. 3 news conference.

And the mayor's announcement is on the heels of a July 29 message from President Joe Biden that said his administration will require all civilian federal workers to provide COVID-19 vaccination status or face strict testing measures, social distancing and masking requirements.

Similarly, around the country, particularly amid the rising number of COVID-19 cases and the spread of the delta variant of the virus, workplaces have been modifying previous decisions on vaccine requirements — going from strongly encouraging, but not requiring them, to saying employees must show proof of vaccination.

One Catholic organization supporting such a mandate for employers is the St. Louis-based Catholic Health Association, which represents more than 2,200 Catholic hospitals, nursing homes and long-term care facilities in the U.S. The group issued a statement July 23 urging "all health care workers to get vaccinated against COVID-19."

The Catholic Medical Association said in a July 28 statement that it "opposes mandatory COVID-19 vaccinations as a condition of employment without conscience or religious exemptions," adding that an "individual Catholic's decision to be vaccinated should be informed by the clear and authoritative moral teaching of the church on vaccinations."

And the National Catholic Bioethics Center said in early July that it "does not endorse mandated COVID-19 immunization with any of the three vaccines" that have received emergency use authorization from the U.S. Food and Drug Administration.

The center, based in Philadelphia, provides a vaccine religious exemption template on its website, www.ncbcenter.org, which states: The "Catholic Church teaches that a person may be required to refuse a medical intervention, including a vaccination, if his or her informed conscience comes to this sure judgment."

The issue of not granting religious exemptions to vaccine mandates could make its way to the Supreme Court, just as restrictions on religious gatherings during the pandemic came before the court as an issue of religious discrimination.

The U.S. Equal Employment Opportunity Commission has said that employers must provide a reasonable accommodation if an employee's sincerely held religious belief, practice or observance prevents them from receiving the vaccination.

Such an accommodation though cannot pose an undue hardship under Title VII of the Civil Rights Act of 1964, meaning it shouldn't decrease workplace efficiency or infringe on the rights of other employees.

The Society for Human Resource Management, based in Alexandria, Virginia, states on its website that employers who want to require employees to take the vaccine should be aware that federal law allows employees to ask to be exempted from the requirement for medical or religious reasons.

To be given a religious exemption, it says "employees should be asked to provide an explanation of his or her sincerely held religious beliefs and, if necessary, appropriate documentation from his or her religious leader regarding the religious belief that conflicts with the employer's vaccination requirement."

Such documentation, which the New York archdiocesan memo specifically referred to, also brings up another legal issue. The memo, for example, asked church leaders to "imagine a student receiving a religious exemption, contracting the virus and spreading it throughout the campus. Clearly this would be an embarrassment to the archdiocese," it said, adding that "some even argue that it might impose personal liability on a priest."

Colleges in particular, with a mixed bag of requiring proof of vaccination, also are looking at religious exemptions.

In July, The Pilot, newspaper of the Boston Archdiocese, published a story by The Associated Press that said some Boston College students and their parents were upset by the Jesuit-run school's refusal to grant religious exemptions to those who didn't want to get the vaccine.

The university is requiring all students, faculty and staff members to receive a COVID-19 vaccine before the fall semester, unless they are granted religious or medical exemptions.

"A religious exemption may be granted if vaccination goes against the fundamental tenets of a faith," said Boston College spokesperson Ed Hayward in a statement.

He added that since Pope Francis, Boston Cardinal Sean O'Malley "and millions of Catholics worldwide have been vaccinated, it is difficult for Catholics to make an argument against a COVID-19 vaccination."

M.C. Sullivan, ethicist for the Archdiocese of Boston, told AP that the Pfizer and Moderna vaccines "do not contain any immorally illicit material." She added that the pope and the archbishop of Boston have said the "remoteness of the abortion act" in the vaccines "is so far removed to the current public health crisis."

Right now, "there's a positive moral obligation to save lives" by getting vaccinated, she said.