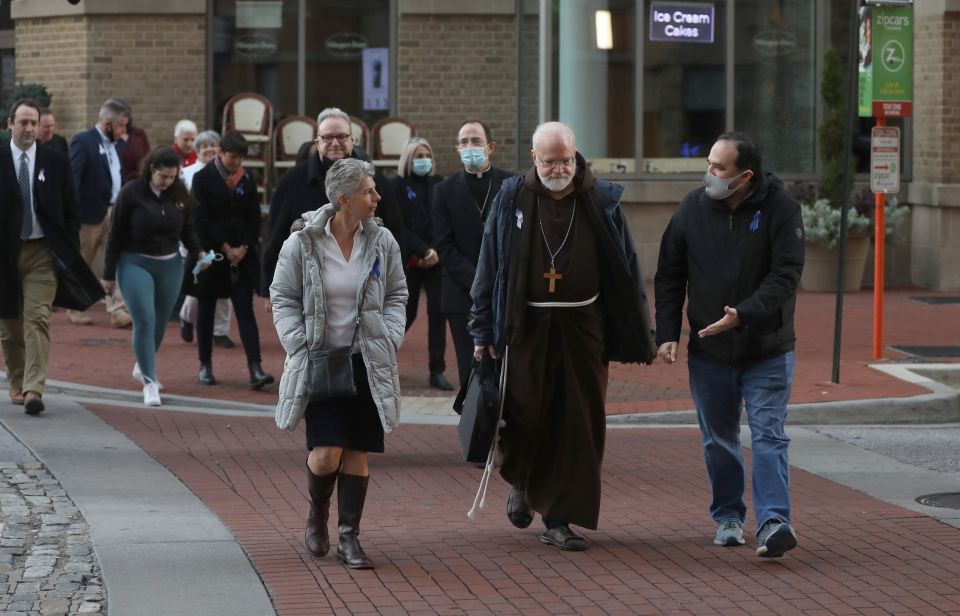 Cardinal Sean P. O'Malley of Boston, president of the Pontifical Commission for the Protection of Minors, leads a sunrise walk to end abuse, in Baltimore, Nov. 18, 2021. (CNS photo/Bob Roller)

Vatican City — The Pontifical Commission for the Protection of Minors hosted a three-day seminar looking at the rights in church trials of those alleging they suffered sexual abuse as children.

"Approximately 60 experts from around the world in civil and canon law, theology, psychiatry and the social sciences joined officials of the Roman Curia to study provisions made in different judicial systems and evaluate the role of victims in the different current canonical penal procedures," the commission said in a written statement, released Dec. 15.

The seminar, held at the Vatican Dec. 12-14, and those who gathered to take part "are a visible expression of the Holy Father's call to us all to be part of a community that confronts and responds to the crime and evil of abuse," said U.S. Cardinal Seán P. O'Malley of Boston, president of the pontifical commission.

"These moments of study and research are an important part of the commission's mandate to truly have frank and informed conversations about what is not working and what must be improved in our safeguarding systems," he said in the written statement.

"It is my hope that this seminar will give greater voice to victims/survivors and clearer directions to those tasked with the responsibility of leadership in our church," he said.

The need to better understand and promote the rights of alleged victims in the context of the church's canonical proceedings had been one of several topics discussed during a seminar sponsored by the commission in December 2019. The faculty of canon law at the Pontifical Gregorian University in Rome published the talks in its "Periodica" journal at the end of 2020.

In his published remarks, Archbishop Charles J. Scicluna, adjunct secretary of the Vatican Congregation for the Doctrine of the Faith, had said more could be done in supporting the rights of victims.

Pope Francis' "Vos Estis Lux Mundi" in 2019 provides for the first time "a universal law that states that the victim has a right to be advised of the outcome of the investigation" concerning crimes allegedly committed by people in leadership, he wrote.

But "I would suggest that we also use this law by analogy for all other situations" by giving the same right to victims of people who are not just leaders but are members of the clergy or of religious orders, he wrote.

The archbishop had flagged the problem during a Vatican summit on abuse in February 2019 when he noted there needed to be a clearer policy on keeping victims informed of the status of cases against their abusers. "Many victims are hurt by the fact that they do not receive the final report," he had said. "It's a lack of respect."

Therefore, another suggestion he put forward at the December 2019 seminar was to appoint "a safeguarding officer or other suitable person that keeps contact with the victim and informs the victim of the progress of the procedures," including the outcomes of investigations, trials or extrajudicial processes, especially now that the "pontifical secret" has been removed.

There should be a "procurator for the person aggrieved," that is, a person designated to represent the victim in the church's penal processes and share information with the victim, he had said.

The papal commission said in its press release that the recent seminar on victims' rights "was based on a comparative analysis of civil jurisdictions across 10 nations. The intention was to learn about the principles that govern different legal traditions with regard to the role of victims in the penal procedures around the world and how these principles unfold in different civil jurisdictions."

Participants discussed "what the current canonical provisions do already provide for, in which areas more and better information about the existing provisions is called for, and how the role of victims in the different canonical procedures can be further strengthened so that the dignity of the human person is best protected and promoted," it said.

The commission said it looks forward to "its role in promoting the outcomes of the seminar and in studying how the church can make the current provisions more comprehensible and accessible to all concerned."