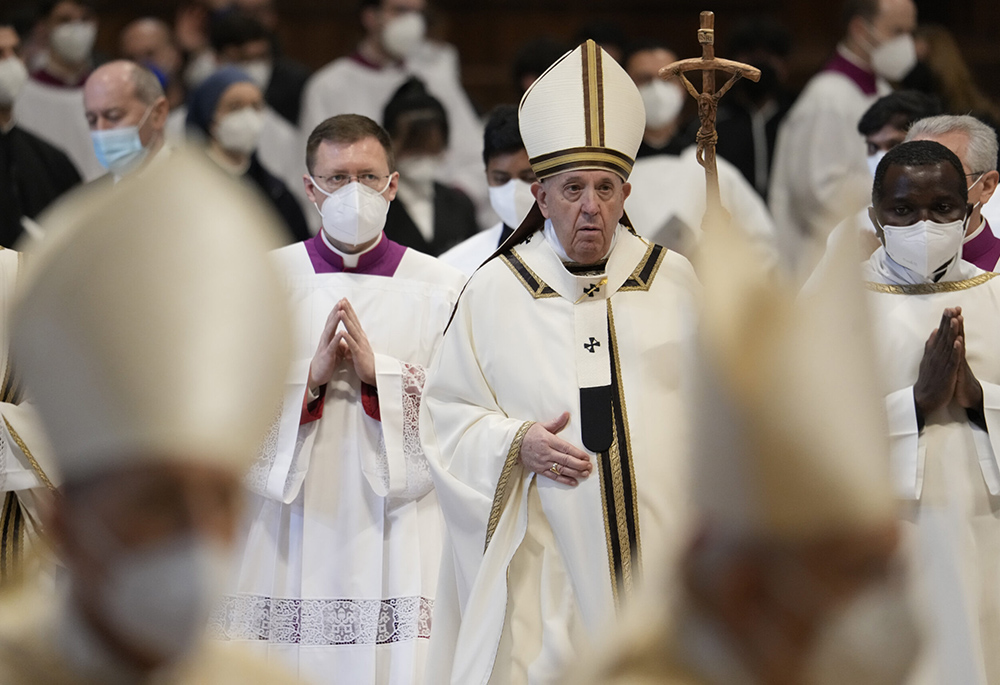 Pope Francis walks with his pastoral staff among Cardinals and prelates wearing FFP2 masks at the end of an Epiphany Mass in St. Peter's Basilica Jan. 6 at the Vatican. (RNS/AP/Gregorio Borgia)

A virulent strain of anger in various American Catholic circles is increasingly directed at Pope Francis.

But of the available issues — from Francis' new restrictions on saying the Old Latin Mass to his advocacy of environmentalism to the wars over whether pro-choice Catholic politicians should be denied Communion, the most troubling and troublesome are the ravings of the anti-vaccine crowd.

Those who are angry about the pope's approval of, and advocacy for, the vaccine deny reality.

In the name of what?

The claims flowing across airwaves and tumbling from pulpits are that masks are unnecessary or that COVID-19 vaccines are morally tainted due to testing or development using fetal tissue.

Catholics are not the only ones who have fallen for misinformation. But Francis and other officials at the Vatican have repeatedly refuted these claims. That so many lay Catholics and clerics alike are ignoring church teachings demonstrates a large leak in the barque of Peter.

Addressing members of the Vatican diplomatic corps accredited to the Holy See on Jan. 10, Francis led off with comments about the pandemic. His main point: There must be a personal commitment to, in effect, follow the science.

The pope said it is important "to immunize the general population" because the personal responsibility to care for one's own health "translates into respect for the health of those around us."

The pope then spoke about the "ideological divides" that allow people to be influenced by the "ideology of the moment, often bolstered by baseless information."

And he called for the world to return to reality and accept vaccines.

The world may return to reality, but what about the angry Catholics? 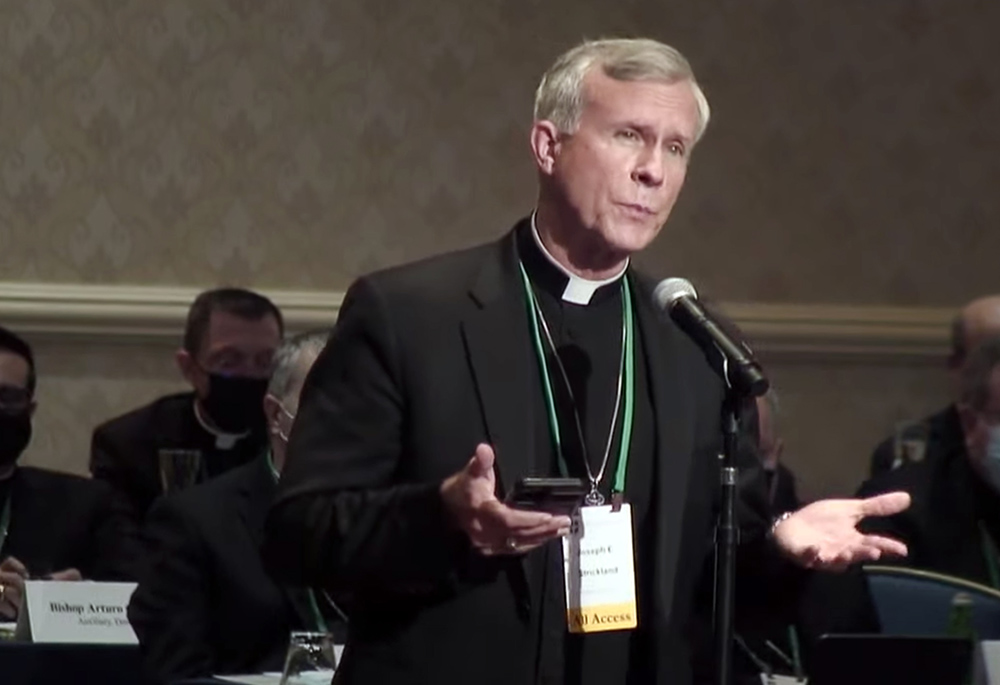 Bishop Joseph Strickland of Tyler, Texas, a supporter of Francis' most vicious critics, recently tweeted that he "will not extend [his] life by USING murdered children."

To be clear, the most effective vaccines available, Moderna and Pfizer, were tested on one of two fetal cell lines initiated from fetuses aborted in 1973 and 1985. The abortions were not performed solely to obtain the cells.

The Philadelphia-based National Catholic Bioethics Center echoes guidance issued by the Congregation for the Doctrine of the Faith in December 2020, which said that vaccines tested on either cell line are preferable to those using cells derived from them, but even those are allowed because of the common good.

Too many Catholics are not having it.

Viganò, a former papal nuncio to the United States who called for Francis' resignation in 2018, has written of a "health dictatorship" that includes vaccines. 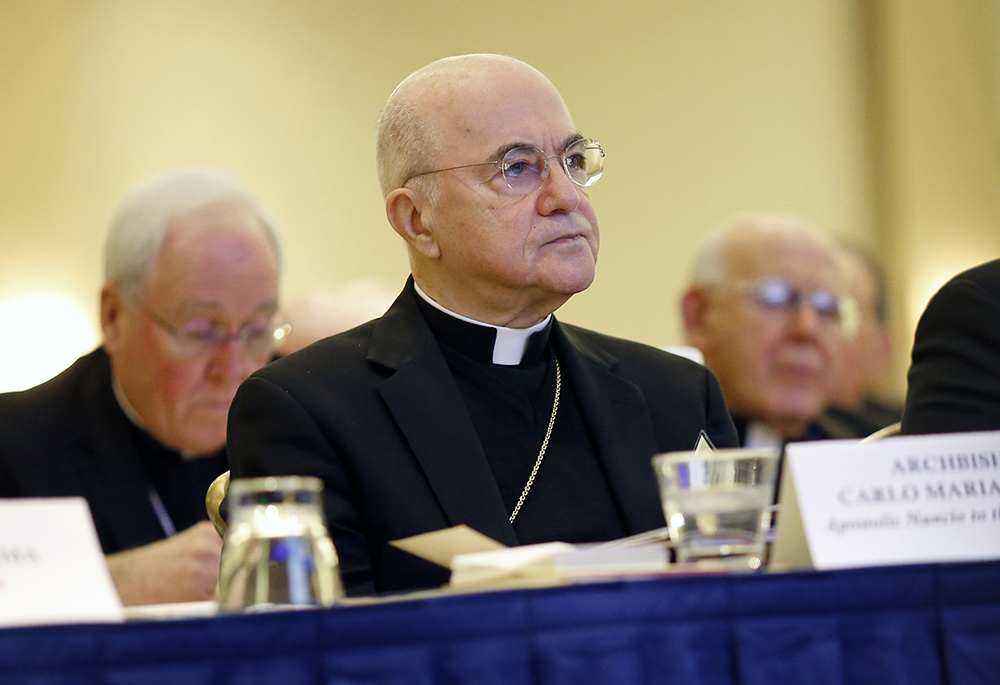 Donnelly, attached to the Diocese of Lancaster in England, claims more than 17,000 Twitter followers. Not long ago he tweeted: "The Bergoglian Vatican is wicked and should be abolished."

Farey, meanwhile, a British subject currently on the second papal women deacon's commission, belittles Francis' support of vaccines as simply "his own viewpoint," folding her stance under "the synodal way," according to a report in The Tablet.

LifeSite News, Church Militant, and the Eternal Word Television Network, as well as smaller media outlets such as Los Angeles' Virgin Most Powerful Radio, along with a significant number of priest-bloggers and anti-vax preachers, continue to spread the kind of vaccine misinformation Francis described to the Diplomatic Corps. Some, but not all, have been banned from Facebook and other platforms due to their falsehoods.

Catholic anger and disinformation are certainly known to Francis. In September 2021, the pope intimated that EWTN, possibly the world's largest religious media network, is the "work of the devil." And that work spreads far. EWTN's quarter-million-viewer-strong television audience (in 140 countries) is bolstered by its 24-hour radio service to some 350 radio stations, Sirius XM and shortwave radio.

In addition, EWTN owns the National Catholic Register newspaper and the Catholic News Agency. Each outlet includes programming and reporting critical of Francis, even as it broadcasts papal audiences and Masses.

The poison in this stew is a general willingness to deny undeniable facts. The danger increases when clerics and other Catholics deny reality. And the people of the world suffer when so-called "Catholic" media spread the dangerous falsehoods.