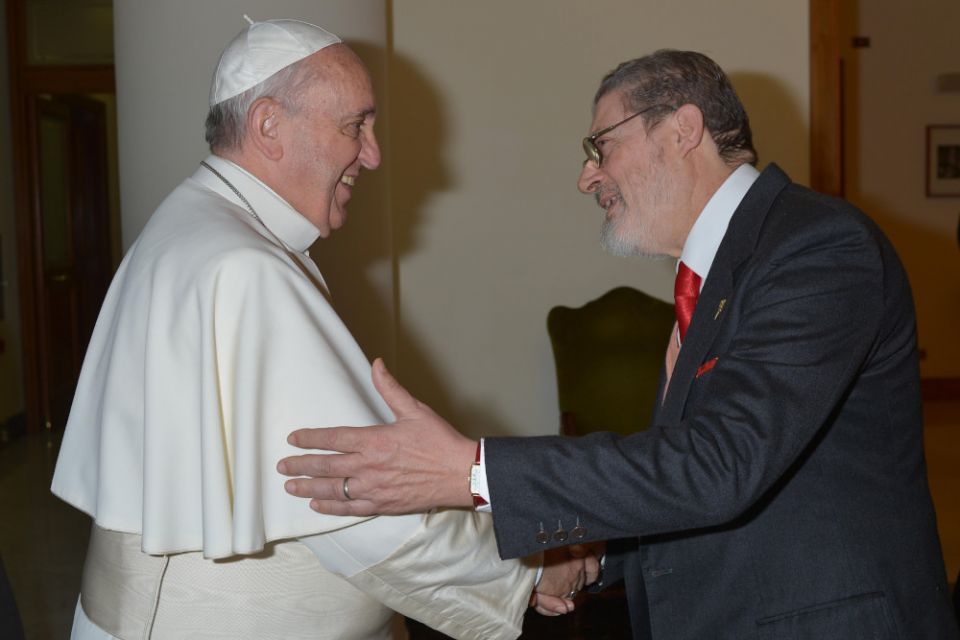 Pope Francis is pictured in a file photo greeting his personal doctor, Fabrizio Soccorsi, who died Jan. 9 of complications caused by COVID-19. Soccorsi, 78, had been admitted to Rome's Gemelli hospital Dec. 26 because of cancer, according to the Italian Catholic agency SIR, Jan. 9. (CNS photo/Vatican Media)

Vatican City — Pope Francis' personal doctor, Fabrizio Soccorsi, died of complications due to COVID-19 on Saturday, a day before the pontiff announced he will receive the vaccine this week.

Soccorsi, 78, was being treated for cancer on Dec. 26 at the Roman hospital Agostino Gemelli when he contracted COVID-19, according to a report by the Vatican Newspaper L'Osservatore Romano published Saturday (Jan. 9).

In an interview with the Italian news channel Tg5 that aired on Sunday (Jan. 10), Francis announced that he will be taking the vaccine for COVID-19 next week.

The Vatican has made the Pfizer-BioNTech vaccine available for its citizens, and the pope said he didn't hesitate to put his name on the list.

"I believe that ethically everyone must take the vaccine," Francis told Tg5, calling it an "ethical option" because the virus doesn't only risk one's own safety but also others' safety.

Francis named Soccorsi his doctor in 2015, succeeding Patrizio Polisca, who is currently charged with overseeing the health of Emeritus Pope Benedict XVI.

After studying at the Sapienza University in Rome, Soccorsi distinguished himself with numerous publications and advisory roles for the Italian state before being hired by Pope Francis. He was an adviser for the Vatican’s health and hygiene department, which has overseen the management of the pandemic within the city-state and was part of a medical committee for the Vatican's Congregation for the Causes of Saints.

Francis' and the doctor's relationship was highlighted in 2017, after the doctor’s daughter died and Francis invited Soccorsi to be with him when the pontiff placed white roses at the Marian sanctuary of Fatima, Portugal.