Seminaries prepare to reopen, train priests for ministry amid COVID-19 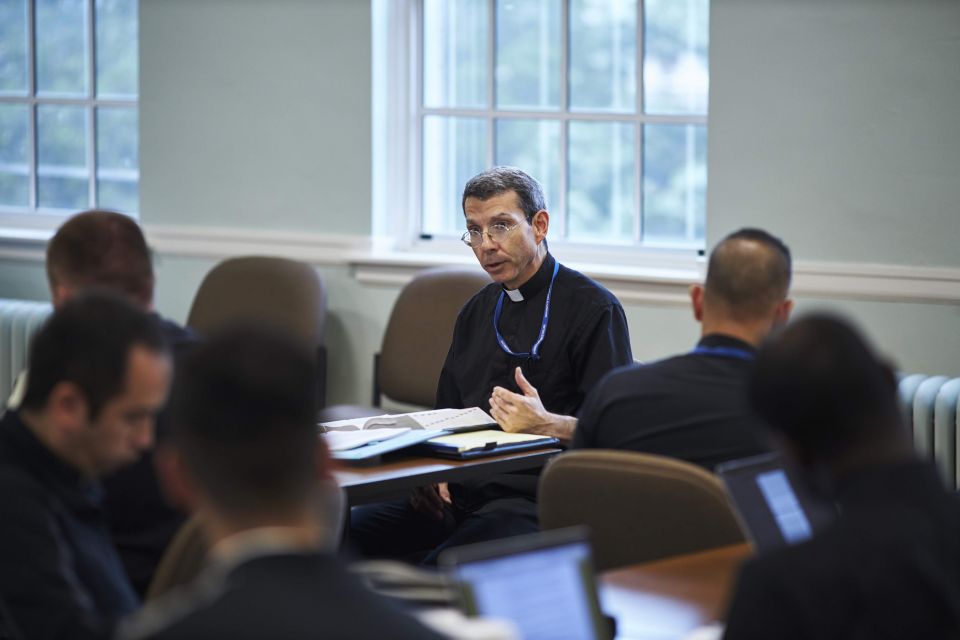 Fr. John Kartje, rector of the University of St. Mary of the Lake, better known as Mundelein Seminary, in Mundelein, Illinois, teaches a class examining the Book of Psalms to seminarians Oct. 2, 2019. (CNS/Courtesy of Mundelein Seminary)

During its two-century history, St. Mary's Seminary and University in Baltimore has stayed open during wars, pandemics and city riots. So in the face of COVID-19, the country's oldest seminary is preparing to do what it's always done each fall: welcome a cohort of new seminarians.

Yet Fr. Phillip Brown, rector of St. Mary's, acknowledges that when this year's new seminarians arrive on Aug. 25, things as the seminary will not just be "business as usual."

Brown told NCR that every single room in the seminary has been measured to determine proper occupancy for the necessary 6 feet of social distancing, plexiglass shields have been installed for professors to teach behind, a new dining space has been opened up, the cafeteria has switched over to boxed meals, and a separate wing has been set up to isolate potentially sick students.

It's all part of an effort to ensure that the Sulpician seminary, which has been in continuous operation since 1791, can continue to prepare new students for ministry at a time when the global pandemic has forced educational institutions, including the nearly 200 seminaries around the country, to reconfigure their programming for the upcoming academic year.

While the changes present new challenges, Brown says he sees it as appropriate training for future priests since, by his estimates, at least "60% of ministry is ministering in crisis situations."

As Brown prepares to welcome St. Mary's biggest crop of seminarians in a decade with an enrollment of 80 students from nearly 20 dioceses, he is focused on both the immediate technical questions of reopening, but also the larger questions of what all of this means for seminary formation in the short and long term. 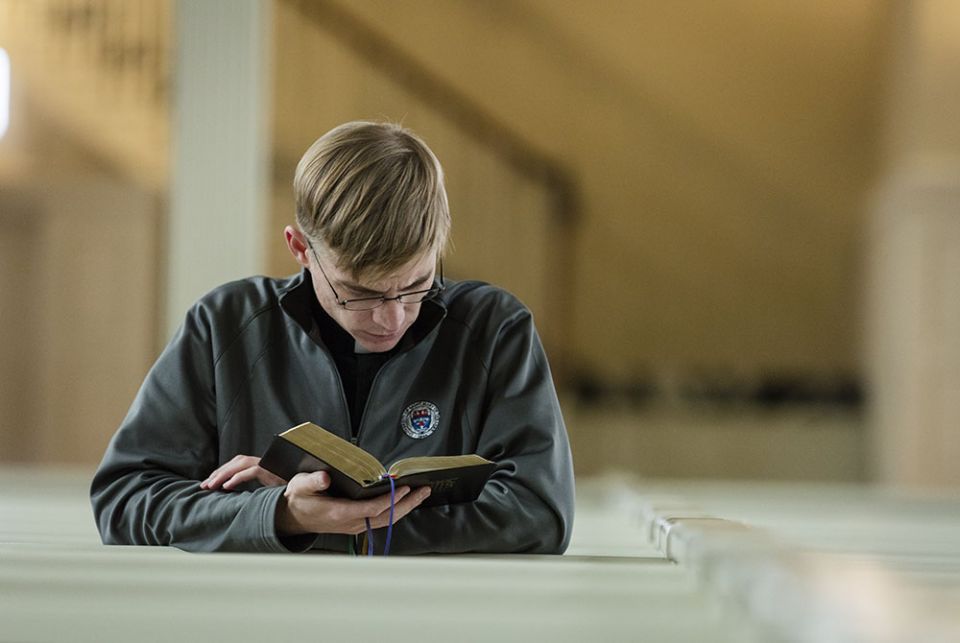 Fr. Andrew Buchanan, a priest ordained in 2020 for the Diocese of Joliet, Illinois, prays a Holy Hour in the Chapel of the Immaculate Conception at Mundelein Seminary, Oct. 25, 2018. (CNS/Courtesy of Mundelein Seminary)

Last March, as the COVID-19 pandemic brought much of the world to a halt, Brown convened a committee of local experts, including representatives from area health centers and the nearby Johns Hopkins Bloomberg School of Public Health, to advise him on a way forward. In addition, he participates in weekly phone conferences with presidents of other area universities and colleges to compare best practices.

Heading into the fall Brown has two priorities: getting the "best possible scientific advice and information" and "navigating the human dimension" of managing anxieties and fears.

On the technical front, classes that meet twice a week will be divided up into two groups, with one batch of students attending in person for one session and the other batch watching online and then rotating for the next session. Students must seek approval before leaving campus, overnight visitors to the seminary will be suspended for the time being, and the seminary is waiting until October before making any potential in-field pastoral assignments to seminarians.

Yet on a more philosophical level, he says he doesn't want this time of uncertainty just to be seen as "something to be endured." Instead, he wants all of the future priests to contemplate "how is God asking us to respond to this?"

Citing Pope Francis' command that it's necessary for priests to have the "smell of the sheep," he admits that future priests may struggle with getting necessary field experience in parishes, since most parish activities are happening online.

Kartje says it's an "ongoing question" as to how to best train priests for ministry that isn't always happening in person, but since last March he's witnessed things that have offered a glimpse of how this can be done, from priests visiting nursing homes to pray with someone from outside their window to seminarians making phone calls to parishioners.

"It's the sort of thing a lot of them haven't experienced before, to talk with someone as a representative of the church," he said.

Melanie Barrett, chair and professor in the department of moral theology at Mundelein, told NCR that while it has at times been difficult for seminarians to cultivate a "ministry of presence" by spending time in parishes on a regular basis during COVID, she has been encouraged by the creativity she's witnessed in response to the pandemic.

"Over the summer, the majority have been very involved in live-streaming Masses and/or faith-formation sessions in their home dioceses; many have produced original podcasts as well," said Barrett. 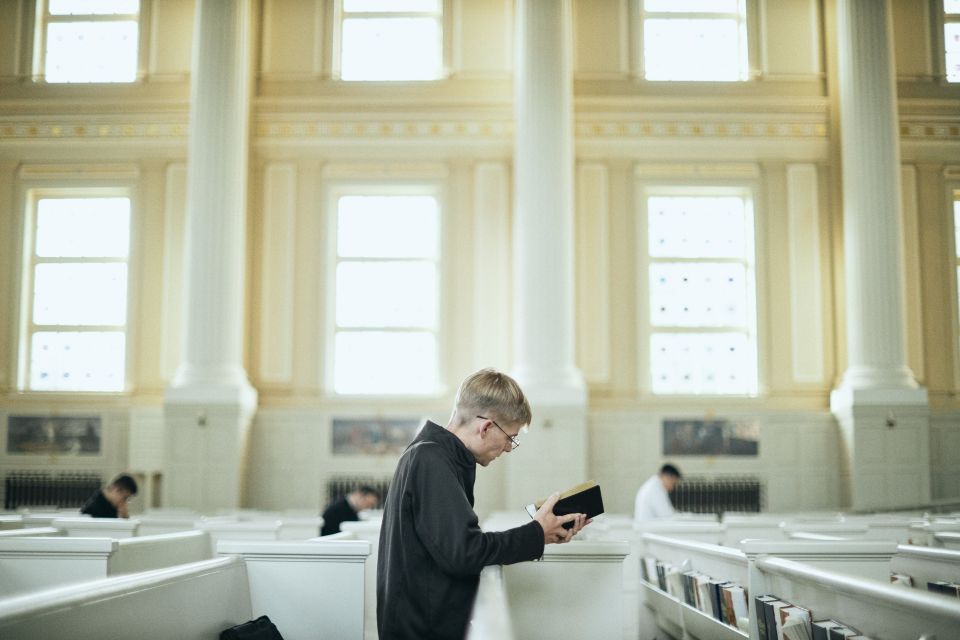 Fr. Andrew Buchanan, a priest ordained in 2020 for the Diocese of Joliet, Illinois, prays a Holy Hour in the Chapel of the Immaculate Conception at Mundelein Seminary, Oct. 25, 2018. (CNS/Courtesy of Mundelein Seminary)

She told NCR she expects to see this ingenuity continue into the new academic year.

"We will allow seminarians to decide — based on their comfort level and personal health concerns — whether they will minister to parishes physically or virtually during the fall semester," she said. "Virtual ministry could include: Zoom meetings with the finance committee or parish council, teaching RCIA or religious education classes online, participating in online prayer/Scripture reflection groups, writing articles to publish in electronic parish bulletins, or producing short videos for the parish website."

While some have raised concerns that the inability for in-person ministry will limit seminarians' experience interacting with women — and further isolate them in an all-male environment, Barrett said that in her experience, seminarians have a "profound respect for women," most likely stemming from their experiences with their mothers, sisters and devotion to Mary, and she doesn't expect this to be an issue.

"I believe that seminarians will continue to interact positively with women, both parish staff and parishioners, during the pandemic through virtual ministry," said Barrett.

She did, however, express concern about vulnerable populations in need of ministry and support that may be without adequate pastoral attention.

"All of the normal challenges that human beings struggle with — economic hardship, family separation, loneliness, addictions, disease and death — are intensified greatly during a pandemic," Barrett said.

"Meeting this challenge will require creativity, dedication and ingenuity in spades," she added.

In the St. Louis Archdiocese, Fr. Paul Hoesing, vice rector for formation at Kenrick-Glennon Seminary, says, "Business as usual in the parish office, rectory and sacristy is being supplanted by life on the roads, porches and parking lots of peoples' lives."

"The outreach looks and sounds like something more like the time of the apostles," he told NCR.

Of course, in order for such ministry to take place in any of these locations, the health and well-being of the students, faculty and staff must be a paramount concern.

Kartje said that of the 140-150 students expected at Mundelein this year, nearly a third are expected to arrive from high-risk states. He said that in conversations with vocation directors, it's nearly a universal expectation from dioceses that arriving seminarians will be tested for COVID prior to arrival in Illinois, and that during the first 14 days, they will not be allowed to leave campus.

In addition, during the first 14 days, seminarians will be required to wear face masks even on their dormitory floor.

"If there's one thing we've learned from student feedback, and the faculty have expressed this as well, there's just a deep, deep desire to have that in-person presence," he said of plans to be on campus this fall. Given that desire, his expectation is that everyone will comply with the new guidelines.

Both Hoesing and Brown expressed similar sentiments, saying that in Missouri and Maryland, respectively, the majority of the seminarians are coming from out of state, but that they are confident that with the necessary protocols that are in place, in-person education can succeed.

Meanwhile, Chris Bongato, a seminarian of the San Diego Diocese, told NCR that he is looking forward to returning to campus after seminarians living at the St. Francis de Sales Center for Priestly Formation in San Diego were sent home last March.

"I was definitely willing and able" to switch online, he told NCR, but admits to "Zoom fatigue."

Bongato, 27, who is slated to be ordained in 2023, said that when classes resume this fall at the Franciscan School of Theology, they will still be online, but diocesan seminarians will be returning to live on campus, which he sees as a good compromise.

"Now that I'm going to be back with my brothers, we'll be in the same environment and ask each other questions if we need to," he told NCR, adding that their return to campus will provide better opportunities to "connect together and pray together."

"We still have that brotherhood," he said.

Nonhuman animals and the COVID-19 pandemic