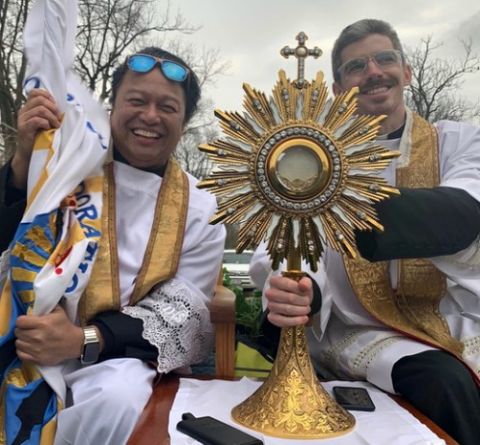 While many spent Easter Sunday in isolation, distanced to prevent the spread of coronavirus, Fr. Santos "Sunny" Castillo of St. John Paul II Catholic Parish in Kankakee, Illinois, was filling up his tank to take the Eucharist on the road.

"Resurrection Road," a video of Castillo and parochial vicar Fr. John Horan driving around parishioner's neighborhoods on Easter morning to bless those who watched, is just one of multiple events the parish held during lockdown. Now, as the parish opens for Sunday Mass, staff, clergy and parishioners share equal concern and excitement.

"All parishes were closed by the bishop simultaneously. We canceled weekend Mass for the first time on March 14 and we were indefinitely suspended the following week," said Alex Rechenmacher, executive assistant of interim Joliet Bishop Richard Pates. "To my knowledge that's the first time something like that has ever happened."

Once the state of Illinois allowed in-person services, each parish in the diocese was required to submit a comprehensive plan. Rechenmacher said plans included taking inventory of the number of exits and the exact amount of space between pews. Ushers had to be retrained specially to avoid long lines during Communion and enforce wearing masks.

While the process of going to Sunday Mass is more technical than ever before, some families are willing to do whatever it takes to be back with their church community.

"Returning [to church] is emotional in that you're getting to receive the Eucharist again and you're getting to make eye contact with Father Sunny again and see the joy in his eyes," said Kerri Lilienthal. "The other side of that emotion is that it's limited and not everybody can be there, which makes Mass feel less complete."

While services weren't open to the public, the parish made exceptions for small events such as funerals and baptisms. The parish also ran a successful livestream of weekend Mass in Spanish and English every weekend since the shutdown.

"We've always had a culture of activity and social media," said Castillo. "We already had a YouTube channel and a really active Facebook account so we really transitioned seamlessly into broadcasting our Mass and programming through our social media platforms. We didn't skip a beat."

For many of the parish's younger members, a livestreamed service was exactly what they needed during the pandemic. For some, it was even preferable.

"It was so much easier for me because I barely had to get out of bed and I kind of liked it more," said 19-year-old Lauren Chaney. "I might even continue to watch the livestreams because I have asthma and I'm not sure if it's safe for me to go back right now."

For others, the lack of youth group activities and church outings has changed their social life. Other notable changes include no singing during Mass, which is currently advised by the diocese, and a separate area for members to consume the Eucharist far from the rest of the pews.

Rechenmacher said the diocese isn't as focused on the future as they are on the "right now," as reopening is a massive undertaking. But he said he didn't foresee membership declining as a result of COVID-19 changes.

To Castillo, the worry isn't there either.

"The buildings were closed, but the church was always alive," Castillo said. "That's how I look at it."

[Eileen O'Gorman is a recent graduate of Loyola University Chicago where she studied multimedia journalism and environmental action.]