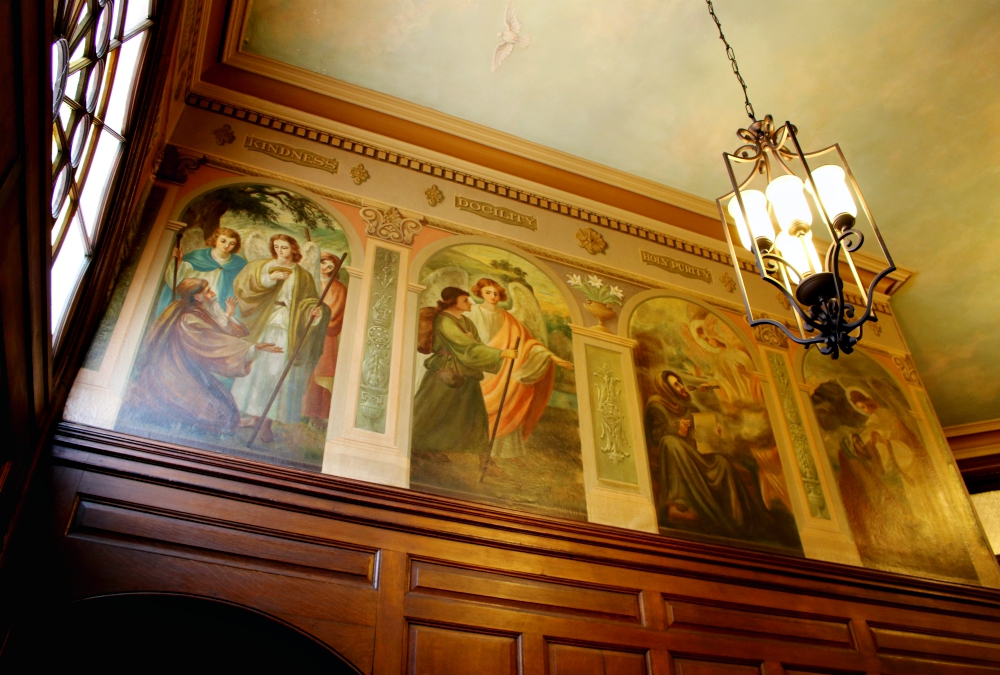 Frescoes depict biblical scenes inside the Institute of Notre Dame in Baltimore. (Courtesy of Drena Fertetta)

The Institute of Notre Dame (IND), founded in 1847 by the School Sisters of Notre Dame, weathered the Civil War, when cannonballs exploded in the distance and nuns cared for wounded soldiers. During the 1918 flu pandemic, nuns treated one another and sick children, and a few of the sisters died. Flames devoured nearby buildings during the 1968 riots following the assassination of the Rev. Martin Luther King Jr. But residents of the poor, Black East Baltimore neighborhood put signs on the independent, all-girls Catholic school reading: "Soul Sisters. Do Not Touch." Nobody did. And as other Catholic high schools left inner-city neighborhoods, the Institute of Notre Dame stayed in its original location, now across the street from a public housing complex.

Then came COVID-19, and it proved too much for the 173-year-old school to survive, the School Sisters of Notre Dame and school leaders said.

Students got word during a hastily called May 5 Zoom meeting that their beloved school would close for good in less than two months.

Many of them wept.

"It was honestly one of the worst things I've ever heard," Niyona Smith, who will attend a Lutheran high school in Baltimore County for her senior year, told NCR. 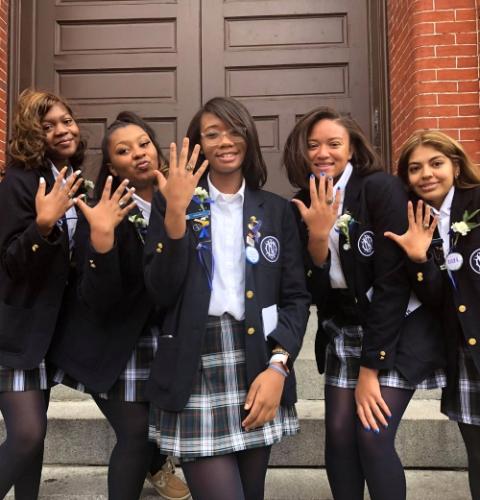 "It was just so heartbreaking, so shocking because it just came out of nowhere, and nobody saw it coming at all," added Smith, who played basketball, soccer and lacrosse at the Institute of Notre Dame.

But clear signs of the school's precarious position had become evident in recent years, sisters and school leaders wrote in a May 5 letter emailed to the Institute of Notre Dame community and obtained by NCR. They cited a 43% decline in enrollment over the past five years, ongoing financial woes, dwindling support from major donors, the need for $5 million in overdue repairs to the school's buildings, and economic fallout from the COVID-19 pandemic that they said proved insurmountable.

"If it hadn't been for the COVID virus, I fully expected we were going to open next year," Sr. Patricia Murphy, chairwoman of the school's Board of Trustees, told more than 800 grads, parents, students and former teachers during a contentious May 6 Zoom meeting, a recording of which was provided to NCR.

Still, in the spirit of the indefatigable German nuns who founded the Institute of Notre Dame, alumni and other supporters resolved to resurrect the school. They launched a nonprofit, Saving IND Inc., and initially hoped the school would remain open at its current East Baltimore location, under the auspices of the School Sisters of Notre Dame.

After the order of nuns and the school's board of trustees made clear the closing would be final, however, the group shifted its goal. Drena Fertetta, a 1983 graduate who leads Saving IND, said the group now hopes to start an independent girls Catholic school with the same name but in another location, possibly at first sharing space with another school or in the building of a nonprofit, and with no affiliation with the sisters.

Those hoping to revive the Institute of Notre Dame — whose alumni include House Speaker Nancy Pelosi and retired U.S. Sen. Barbara Mikulski — have devoted hundreds of hours to devising a comprehensive strategy to revive the school and plan to launch a major fundraising drive in about a month. A private Facebook group for Saving IND has more than 1,000 members.

Amanda Michael, a 2005 graduate who now teaches at a public elementary school in Baltimore County, brims with optimism: "IND girls don't really take no for an answer, so we're going to keep fighting. We were taught well: As long as we have faith and work hard and pray, there's nothing we can't do."

Like the Institute of Notre Dame, other Catholic schools, particularly those in urban areas, have faced enormous challenges for decades. As middle-class families moved to the suburbs and increasingly chose public or non-Catholic private schools, the number of Catholic schools nationwide plummeted from 11,352 in 1970 to 6,183 today, said Margaret Kaplow, a spokeswoman for the National Catholic Educational Association.

And since the COVID-19 pandemic began, 140 Catholic schools nationwide have closed for good amid a sharp decline in tuition revenue, and hundreds more are in danger of closing, according to the U.S. Conference of Catholic Bishops.

"The closure of schools that serve urban areas are disproportionately harmful to low-income and black children served by these schools," Los Angeles Archbishop José Gomez, president of the bishops' conference, and other prelates wrote in an Aug. 5 letter to House and Senate leadership to solicit federal aid for Catholic schools. 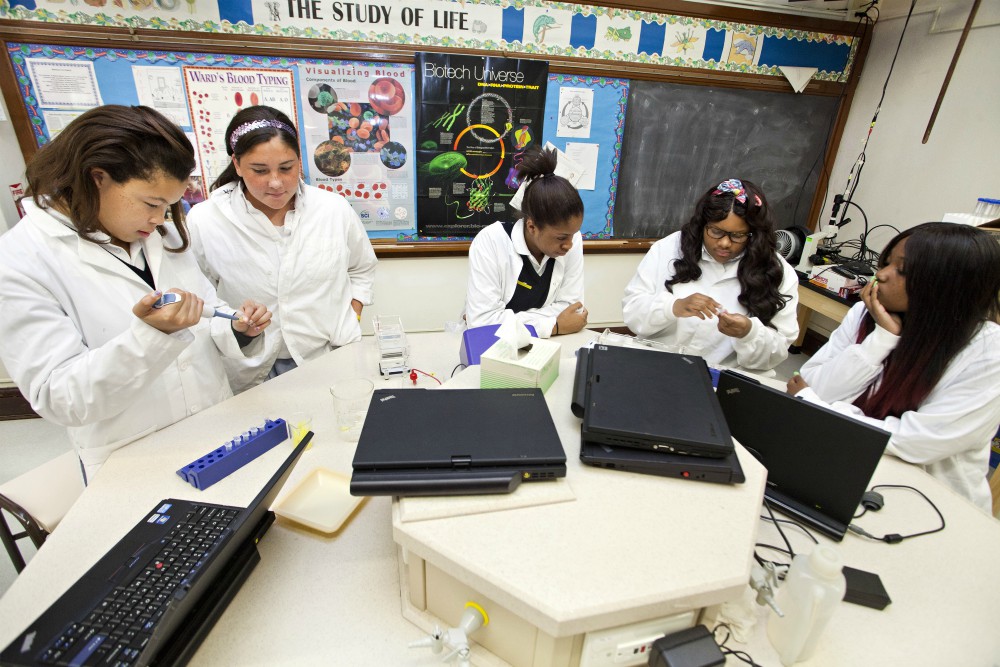 Students play the roles of DNA analysts working in a forensic lab at the Institute of Notre Dame in Baltimore, in this 2012 file photo. (CNS/Catholic Review)

Trustee chairwoman Murphy, a 1962 graduate whose three sisters also graduated from the school, and Sr. Charmaine Krohe, provincial leader of the School Sisters of Notre Dame Atlantic Midwest Province, said in a written response to questions from NCR that the COVID-19 pandemic had strained families' finances, casting doubts about whether they could afford tuition.

"The pandemic had an especially devastating effect on these families, many of whom were laid off from their jobs. They were uncertain as to whether they could commit to another year at IND for their daughters, even with financial aid," the two nuns wrote.

Murphy and Krohe said enrollment had plunged from about 450 in the mid-1990s to 176 when the school closed June 30. And only 25 girls had been enrolled in the freshman class for next school year. About 90% of students received financial aid.

"The closing of IND is such a big loss for the city," said longtime Black activist Ralph Moore, the founder of the Peace Camp, a program based at St. Frances that teaches nonviolent conflict resolution. "The School Sisters of Notre Dame did so much good for the community in and around the Latrobe Homes, and IND parents knew their children would get a good education, quality teaching, discipline and safety in the inner city that they often don't get in public schools."

Murphy and Krohe did not specifically mention violence in Baltimore. But in a May 29 follow-up letter to the Institute of Notre Dame community, they wrote, "We have heard time and again from prospective families that our location is not desirable and is an important factor in their decision to choose a different school."

The school had prided itself on its racial diversity — 60% of its students were Black — and its close relationship with the surrounding community.

The lessons of the Institute of Notre Dame extended beyond the classroom, to the impoverished community, where students and grads said they had never been afraid.

Only two nuns still taught there. The rest were lay teachers, mirroring trends at other Catholic schools, with the precipitous decline in the number of Catholic women religious.

Buck says marketing and recruitment efforts had fallen off dramatically, and in 2018, the school abruptly stopped publishing Onyx, a glossy, annual recruitment magazine.

"After the past decade of changes and challenges, it seems the sisters had just become tired," Buck says. 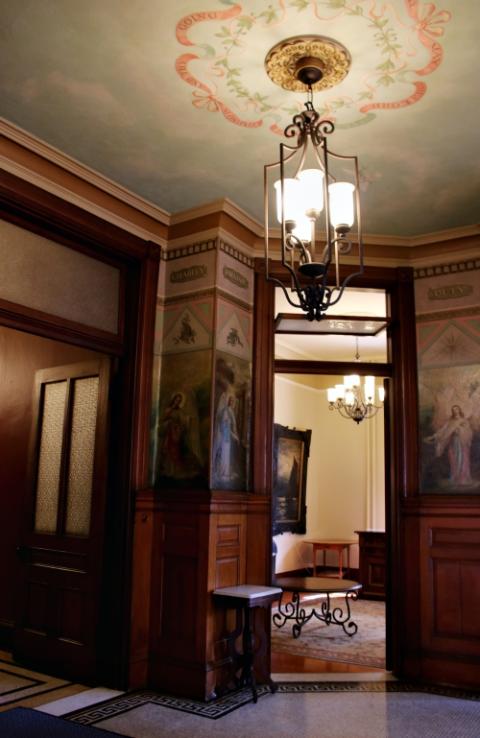 The School Sisters of Notre Dame and Institute of Notre Dame leaders have said they haven't determined what they will do with the historic school building, with its formal parlors, biblical frescoes, wood ornamentation and stained-glass windows. (Courtesy of Drena Fertetta)

Murphy and Krohe wrote that contributions from alumni had declined 36% in 2019-20 compared with the previous school year, when only 769 of the 7,000 living grads contributed, despite repeated pleas. In the past several years, the two nuns wrote, the School Sisters of Notre Dame province had already given several million dollars to keep the school afloat. The school, the nuns said, had faced a $1.7 million operating budget shortfall for next school year, before taking into account the impact of the COVID-19 pandemic.

Congregational and school leaders said they have not determined what they will do with the historic school building, with its formal parlors, frescoes of biblical scenes, hand-carved wood ornamentation and stained-glass windows.

"To lose IND would be like losing a part of my soul," says Theresa Satterfield, a 1970 graduate and leadership development consultant.

Even if it takes a miracle, Satterfield and other Saving IND members cling to this vision: The spirit of the school that survived so much will live on, and proud IND girls will gather once again to celebrate commencement at the massive, neo-Gothic Cathedral of Mary Our Queen in North Baltimore. They'll carry a dozen red long-stemmed roses. They'll wear matching white dresses. They'll share stories and shed tears of joy, embrace and live anew the school's motto: "One mind, one heart."