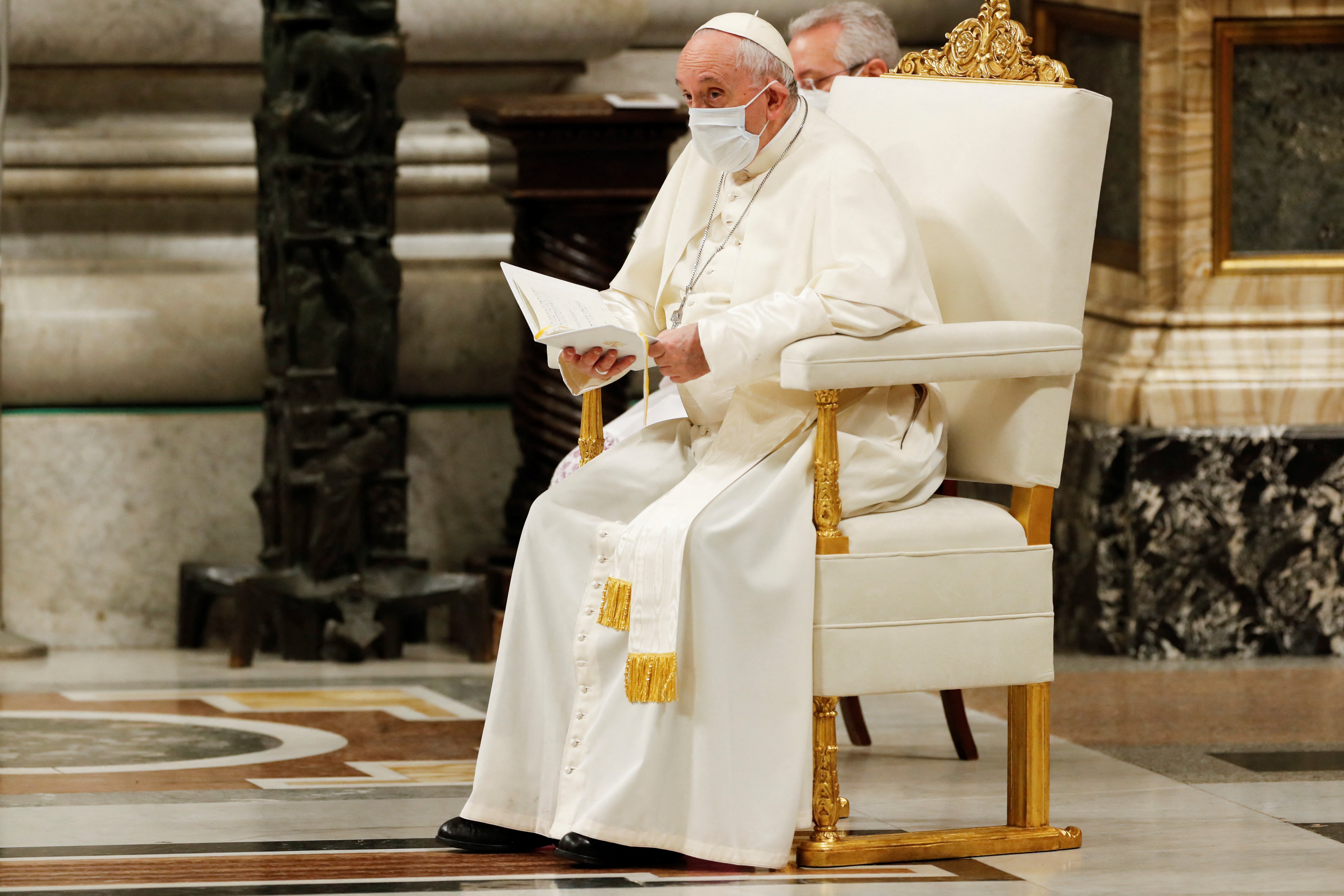 Pope Francis wears a mask for protection from COVID-19 as he participates in an evening prayer service in St. Peter's Basilica at the Vatican Dec. 31, 2021. (CNS photo/Remo Casilli, Reuters)

In a tweet laden with backstory and pointed frustration, the Vatican’s Pontifical Academy for Life defended the COVID-19 vaccine and called out those who spread “malinformation” to discredit the vaccine as peddling “pure nonsense.”

The Pontifical Academy for Life, the Vatican’s think tank dedicated to protecting life from conception to natural death, took to Twitter on Tuesday (Jan. 4), using its official account to criticize “Catholics” who insult the think tank and its president, Archbishop Vincenzo Paglia. “#COVID-19 exists, and the only way to return to normal is to get #vaccinated,” read the tweet.

The statement on social media pushed back specifically against critics who draw a direct line from abortions to the vaccines, saying “abortions have nothing to do with” the vaccines, and insinuating the opposition is instead born from the culture wars in the United States, home to many vocal papal critics.

Speaking by phone with Religion News Service on Wednesday, the spokesperson for the academy, Fabrizio Mastrofini, said the tweet — which has generated considerable pushback — was a response to media articles and online critics who oppose the Vatican’s support for vaccines.

On Dec. 22, the academy published a document addressing the impact the pandemic has had on children and advising a more holistic effort by Catholic and lay institutions to promote the well-being of minors. Beyond encouraging the accompaniment of families suffering due to COVID-19, the document seemed to support the vaccination of children over the age of 5, which is already underway in Europe and the United States.

The document was criticized by many who believe the vaccines are immoral. While the vaccines do not contain fetal cells, fetal cell lines were used during testing. The Vatican department overseeing doctrine deemed some vaccines “morally acceptable” and Pope Francis has backed global vaccinations efforts, calling getting jabbed “an act of love.”

The Vatican’s support for vaccination has not convinced some Catholics who have voiced their opposition in news articles, blogs and tweets, which “led to an avalanche of insults toward the academy and the pope on twitter,” Mastrofini said.

Mastrofini acknowledged the Pontifical Academy for Life is “the most attacked department in the Vatican,” but he believes this is because it’s “the only one who answers back.” All Vatican departments have some form of social media presence, but they tend not to engage with their audience and limit themselves to communicating information and updates.

But there are other reasons why the academy is the preferred target of disgruntled Catholics. “We are perceived as the spearhead of Pope Francis’ reform,” Mastrofini said. “This is an attempt to intimidate us. They try to scare us because they want us to be silent and not speak on controversial issues,” he added.

To understand why some Catholics, especially conservatives, hold a grudge against the academy, it’s necessary to go back to 2016 — when Pope Francis enacted a shake-up of the group’s composition, organization and objectives.

Pope Francis chose not to renew the mandate of some of the most vocal culture warriors in the academy and appointed instead academics from a diverse and pragmatic background. He also limited their term to five years and — most significantly — eliminated the oath of fealty to the Catholic magisterium, allowing people of different faiths to become members of the academy.

This last change was considered “the great betrayal for conservative Catholics,” Mastrofini said.

Pope John Paul II created the academy in 1994 to study the legal and moral questions surrounding life in light of Catholic doctrine, but its main priority was combating abortion.

Francis has expanded the focus of the academy, telling members on the academy’s 25th anniversary they need to embrace a “global bioethic” that addresses human life in its relation to technology and the environment while maintaining “abortion and euthanasia as extremely grave evils.”

“Before all else, we need to enter into the language and lives of men and women today, making the gospel message incarnate in their concrete experiences,” Francis said.

Mastrofini said the academy and Paglia are used to the haters on social media and so far have not held back because of it.

In September 2020, the think tank published a tweet with a picture displaying Michelangelo’s “Pietà” with Mary holding a Black Jesus to raise awareness of racism as it dominated the political discourse in Italy and abroad at the time. The academy published a tweet in April of last year in honor of the late theologian Hans Küng, known for his criticism of papal infallibility as well as his questioning of priestly celibacy and the Catholic ban on contraception. Both these tweets were met with pushback online.

As the Vatican enters a new year and Pope Francis prepares for the next step of his reform, the academy continues to raise the questions of its mandate in this new age — planning conferences and events focused on care for the sick and dying, and equal vaccine distribution globally.